World(s) of Warcraft: A Tale of Two Azeroths

There are now two games one could play bearing the title World of Warcraft, but they're hardly comparable experiences. Here's what its like to be new to both in the year 2019.

The response has been considerable.

All five of our readers will know I play Final Fantasy XIV regularly. Our Free Company is practically a barren wasteland now, as our players who fondly remember the WoW of old have run to classic instead. I didn’t think I would myself ⁠— as you’ll soon learn, I’ve never had much fondness for WoW ⁠— but T@P’s other editor saw to that.

When someone gifts you a WoW time card, you play WoW.

And here we are.

We’ll start with my experience playing WoW shortly after the release of Warlords of Draenor last summer.

A few disclosures before we begin:

With that, we turn our attention to Teldrassil, where a new Night Elf has arrived. 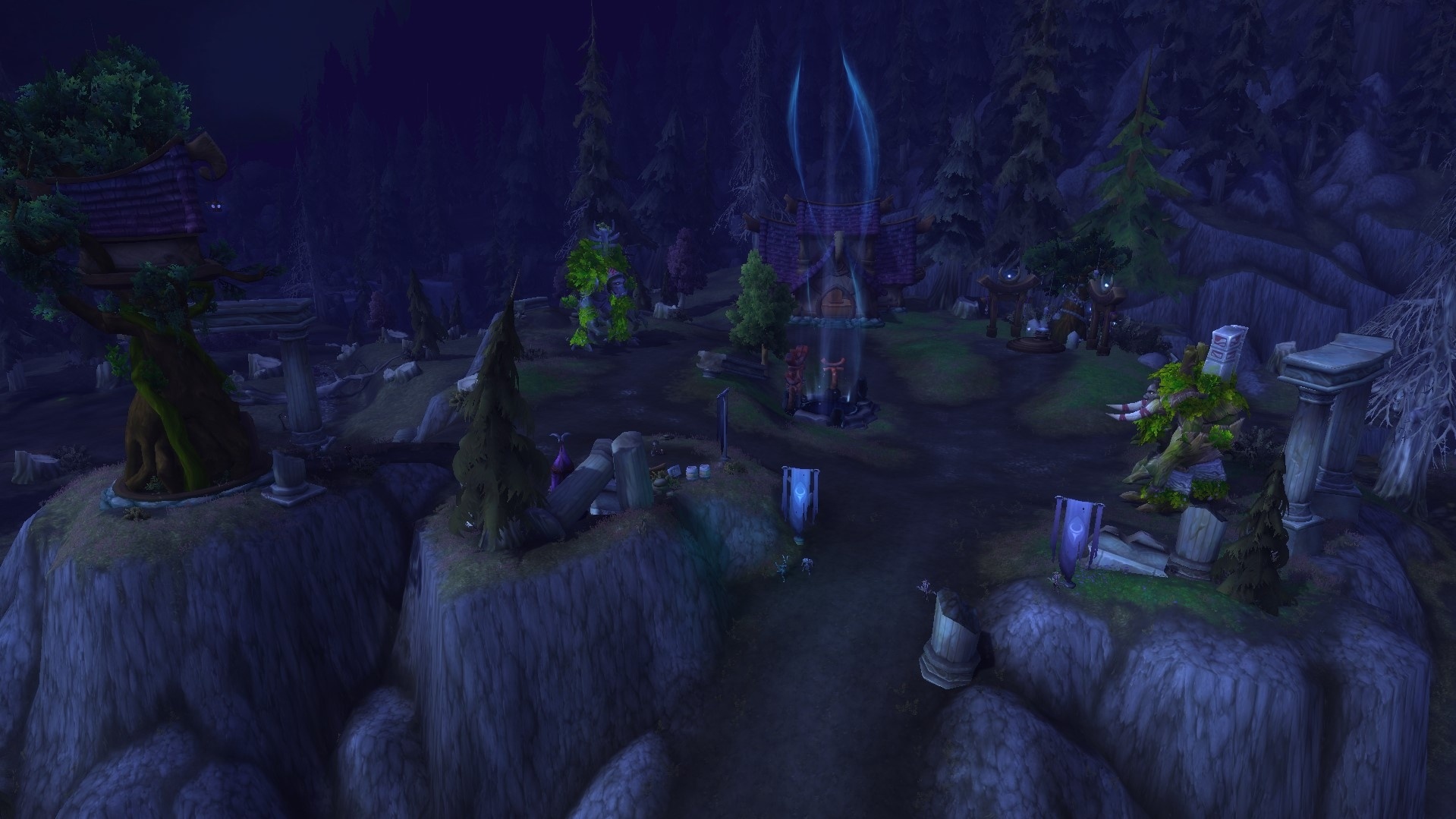 My adventure started as a Night Elf Monk in Teldrassil. Cassandrity embarked into the world to make friends, kick ass, and take names. 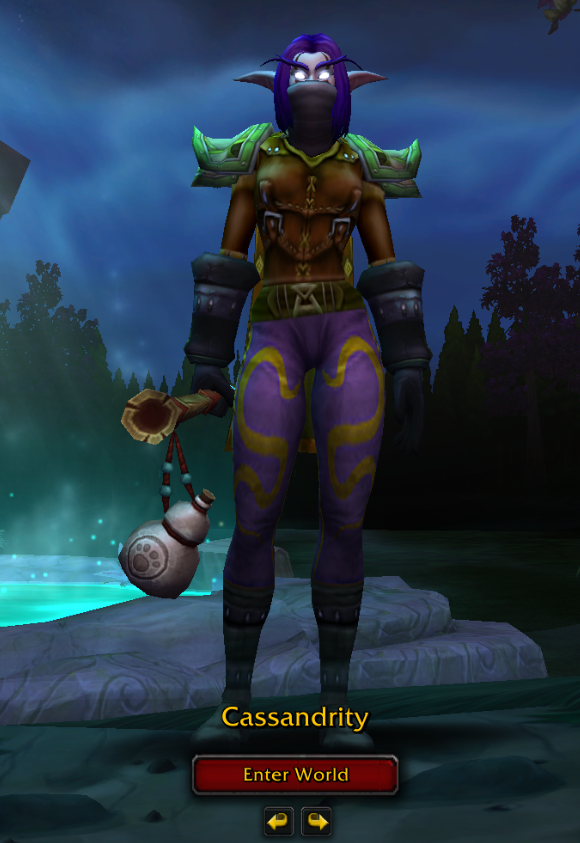 We accomplished one of those three.

Adventuring alone was an easy feat. Cassandrity was more than capable of crushing mobs on her own. She broke countless creatures bones with fists, staves, and barrel tosses. The local bears would’ve told stories in whispered warnings, had she permitted any to live and tell the tale. 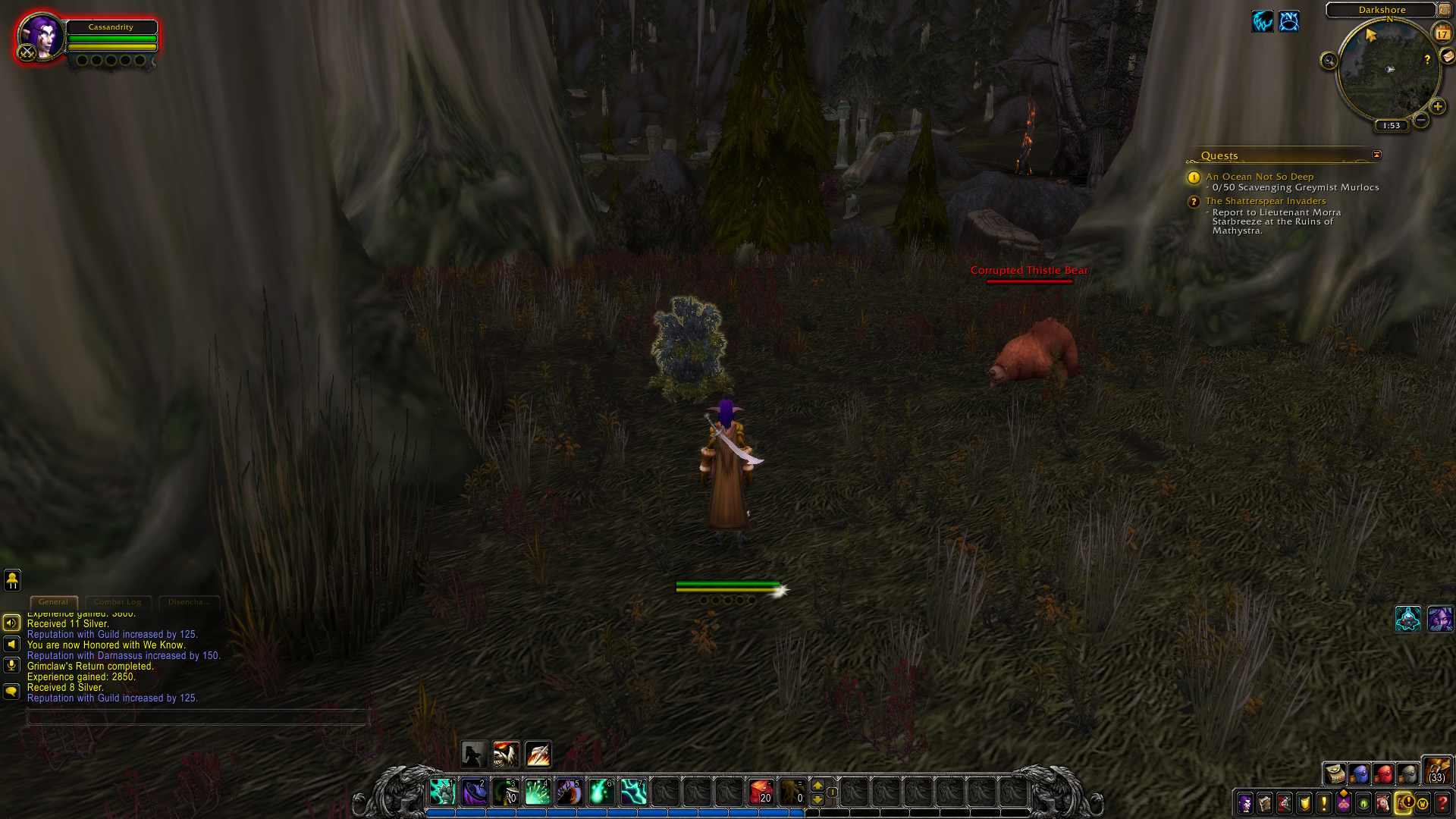 This bear interrupted my screenshot. He paid the price soon after.

It ends up it’s a good thing adventuring alone was so easy, because making friends was nigh impossible. It’s hard to take names when new names are constantly popping in and out around you, a result of WoW’s dynamic sharding. Even when I did see the same names adventuring in a given zone, however, no one seemed interested in answering questions from a new player.

The ease of solo questing meant everyone was lost in their own little worlds, more or less playing a solo RPG with some netcode latency. 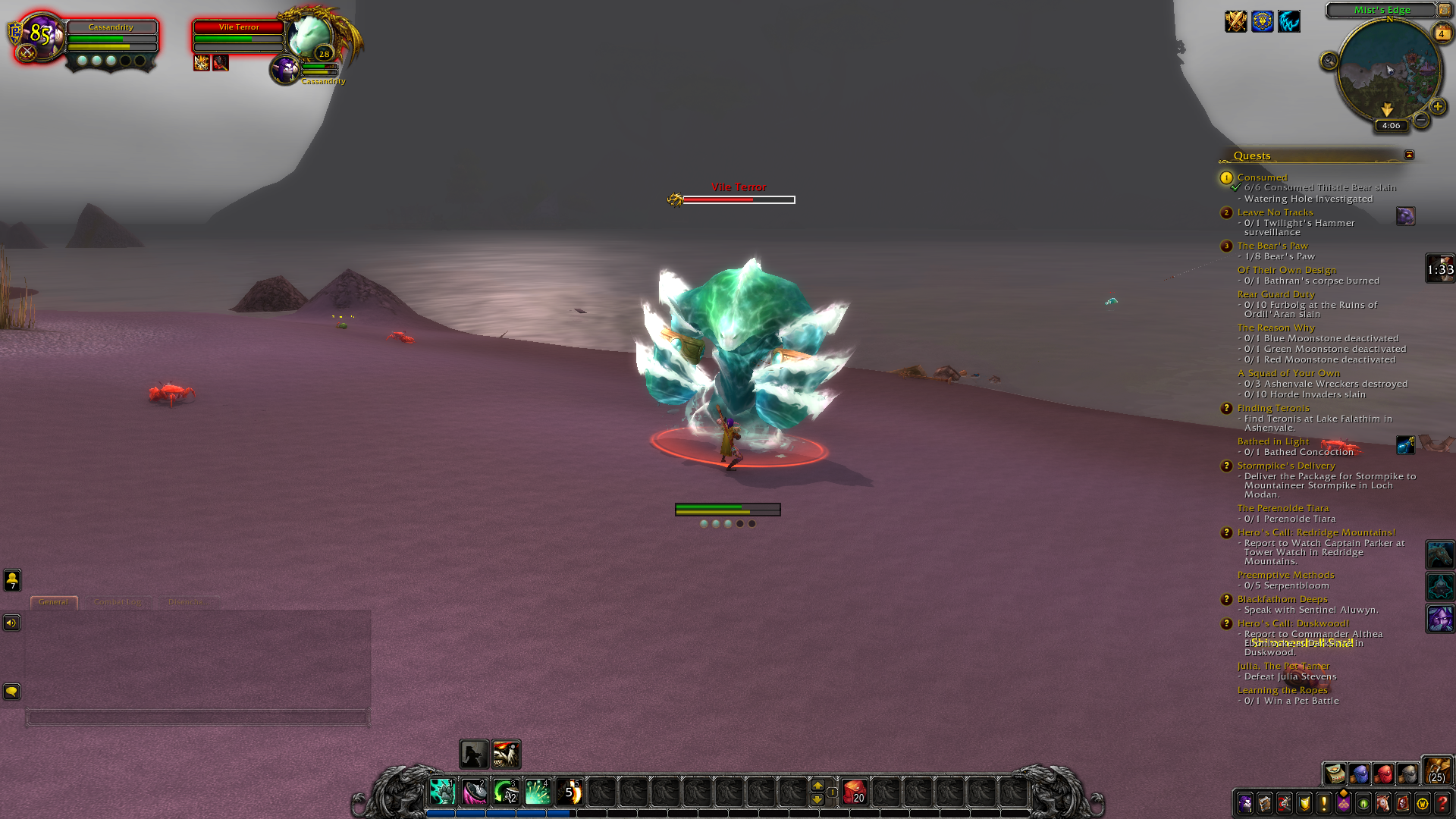 I thought perhaps this problem would vanish once I unlocked dungeons, but it only got worse. No one I ever grouped with said a word to me in any dungeon. At one point I got horribly lost in Gnomeregan, a dungeon I’ve since learned is notorious for turning groups around. This was the only dungeon where I managed to engage anyone in conversation, and it was likely compulsory. After all, I was the group’s tank, and it's usually good to point your tank in the right direction.

Cassandrity made it to level 29 before I stopped playing. She leveled entirely on the Darkshore; Aside from the handful of dungeons I attempted, she never ventured far from Teldrassil. She had no reason to.

The game could’ve been called “Shores of Warcraft” to her.

World of Warcraft Classic as a Newbie 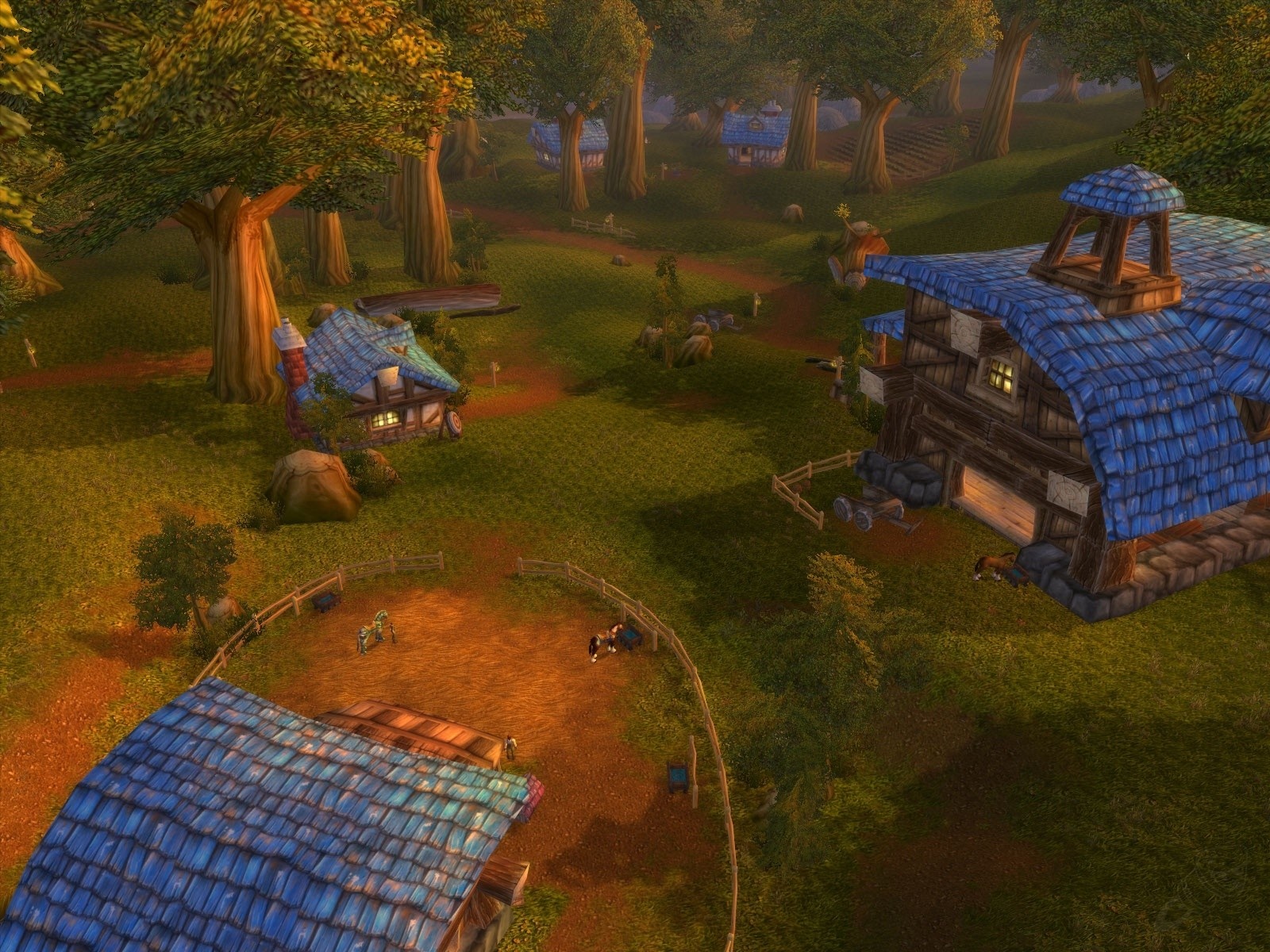 Lazerdrone’s adventure started in Elwynn Forest. He was a level 1 Paladin, and was ready to kick ass, make friends, and take names.

He’s accomplished two of those so far. 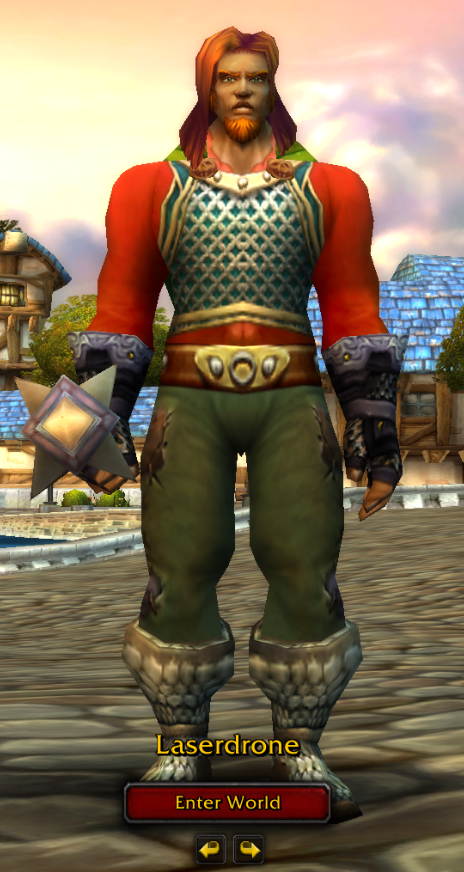 Lazerdrone reminded me of an American Gladiator during creation. Hence the name.

Lazerdrone’s experience was quite different from Cassandrity’s. For one, he died. He has experienced death so much it feels more like a memory. At the time of writing, he has died 24 times, more than quadrupling Cassandrity’s deaths.

Lazerdrone is not a force unto himself. He can barely handle one wild wolf ⁠— and even that’s an edge case, depending on how hungry it is. 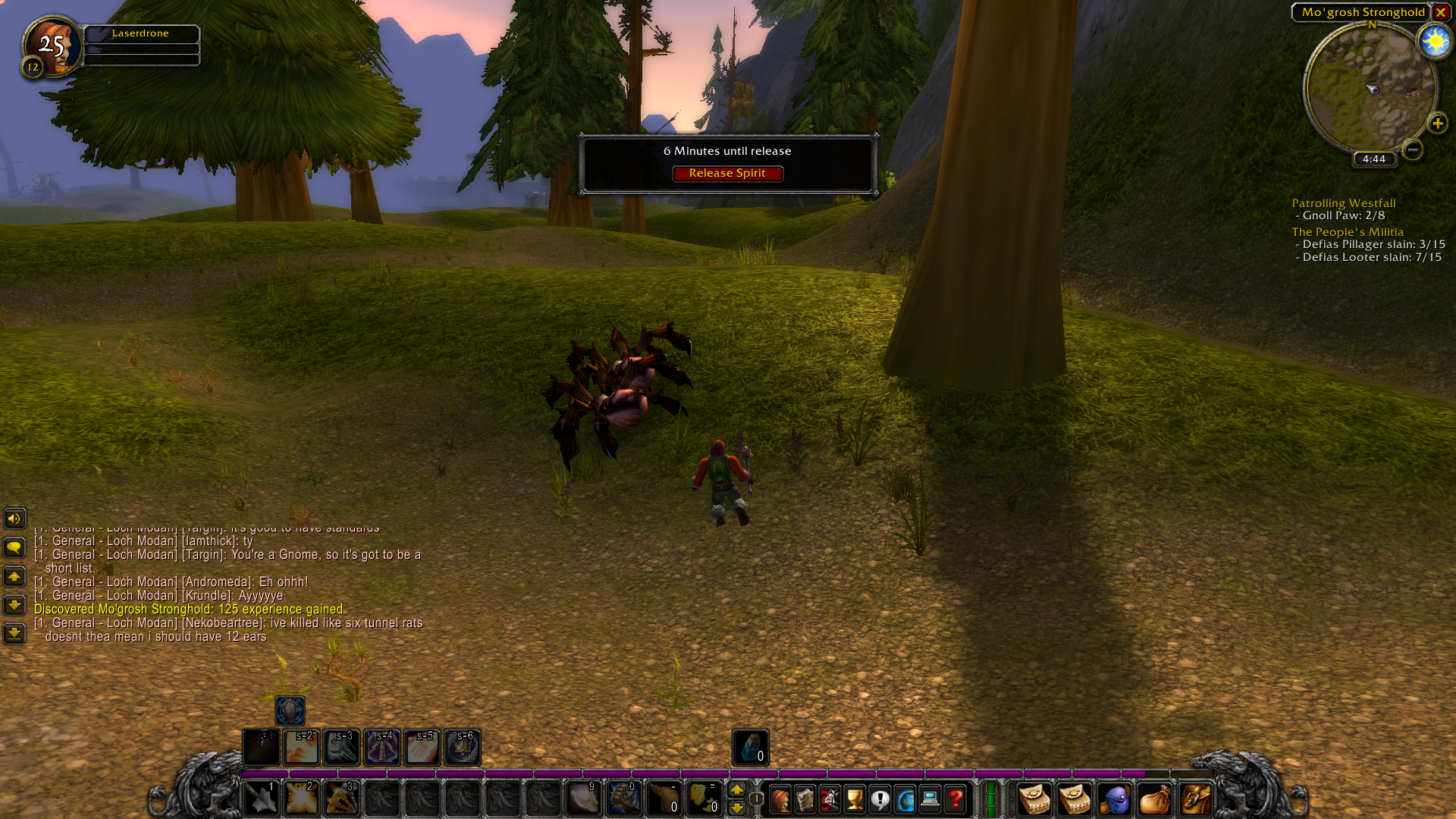 Or Spiders. They need to eat, too.

I quickly learned WoW Classic heavily encourages grouping up with others. The experience and loot rewards are divided amongst the party, but it’s worth it to not die every encounter. Also, while Cassandrity didn’t really have to worry about who was killing what, Lazerdrone did. The forests were filled with dead wolf corpses, and any wolf already engaged in combat wouldn’t count for his quests to cull their numbers. The local militia is watching, and they didn’t say “help others kill wolves.” They want you to kill those wolves, dammit.

However, grouping up means everyone in the group gets credit at once. The result?

Lazerdrone was besieged by party requests. Mages, hunters, and rogues Azeroth-wide were constantly inviting him to help adventure, eager to have someone else take the brunt of the damage, and not have to compete for quest credit.

I won’t lie ⁠— these mechanics, taken on their own, are horribly annoying. It’s very frustrating to have a random hunter shoot a nearby wolf before you can reach it, thereby denying you credit. However, it also encourages community engagement in a way modern day WoW does not.

Lazerdrone also covered more ground his first night in existence than Cassandrity ever did. Within an hour, Lazerdrone had no more quests to pick up in the forest. He made a detour to Stormwind to deliver some shipments, and then from there, was sent to the town of Goldshire.

All of this amounted to walking. Lots of walking. 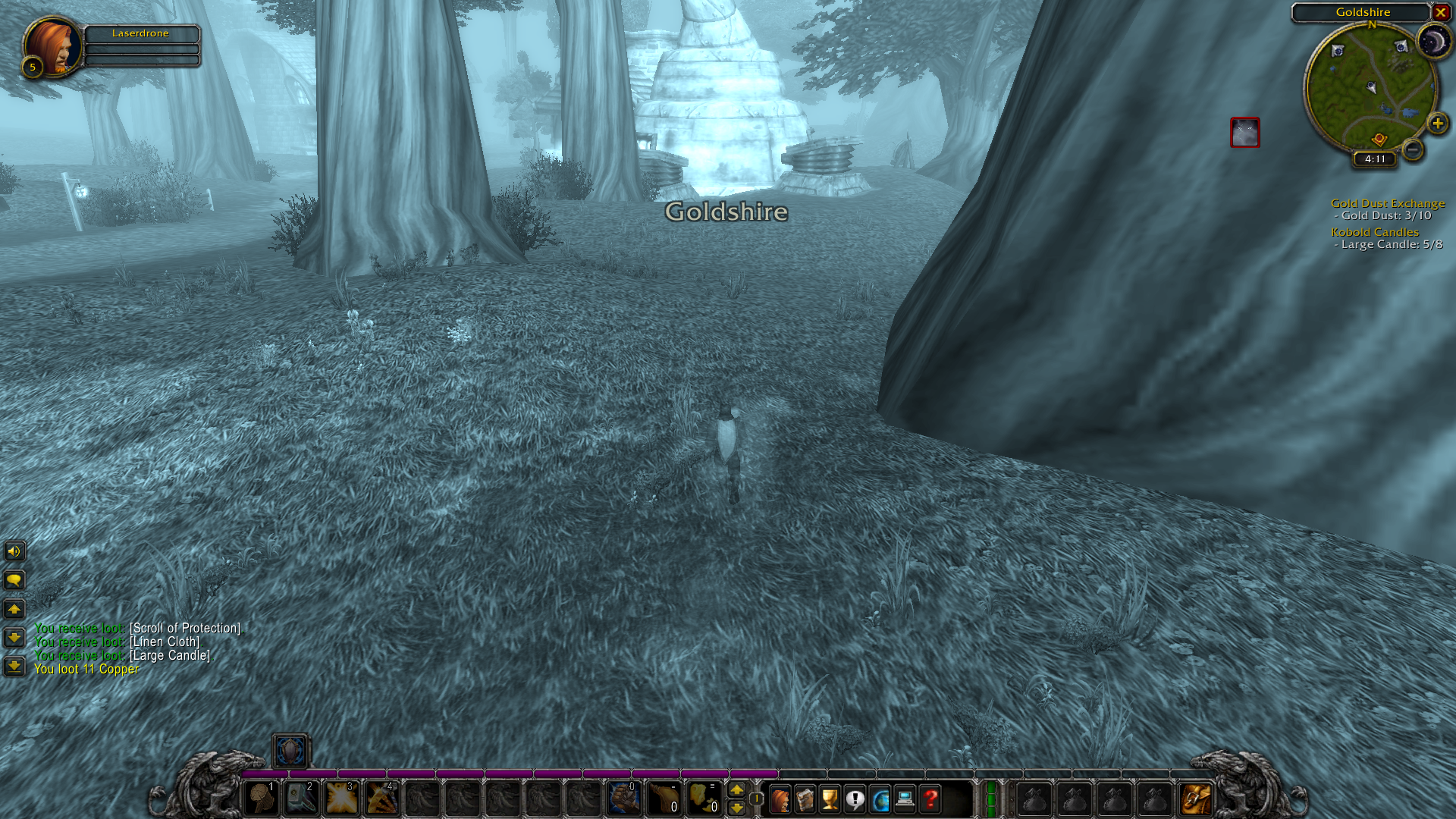 Even in death, Lazerdrone can’t escape the walking.

Cassandrity didn’t have to do much walking. As a monk, she had an ability called Zen Pilgrimage, which would teleport her to a temple. From the temple, she could then teleport to most major cities. And, if she couldn’t perform a Zen Pilgrimage for whatever reason, there were plenty of portals all over Teldrassil to use.

By necessity, Lazerdrone got to know the world much better than Cassandrity. He felt the distance, the size and scope of it all. He didn’t have portals ⁠— he had either his feet, or griffins on predetermined flight paths. Or at least he did eventually, once his new friends told him where to find the flightmasters.

His first night, he walked everywhere, unaware flight was even an option. 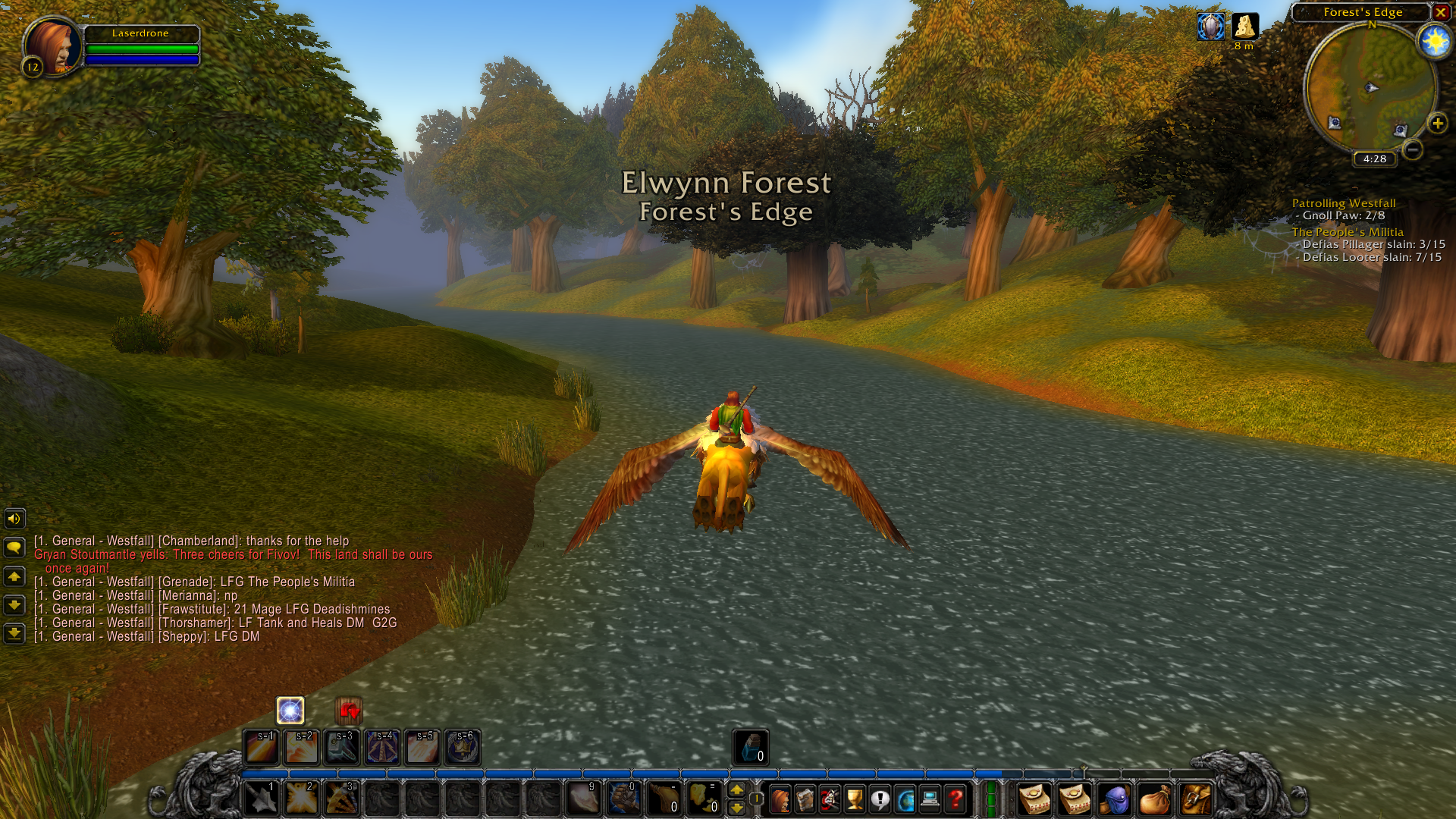 Lazerdrone lives a much better life since he discovered flight masters.

Lazerdrone has ventured to Westfall, taken a tram to Ironforge, and hiked across snowy fields into Dun Morogh, with his Rogue friend Girlhack acting as a guide.

Cassandrity, meanwhile, sits idle on the Duskshore. The only world she’s ever known and likely ever will, despite having 17 levels on Lazerdrone. 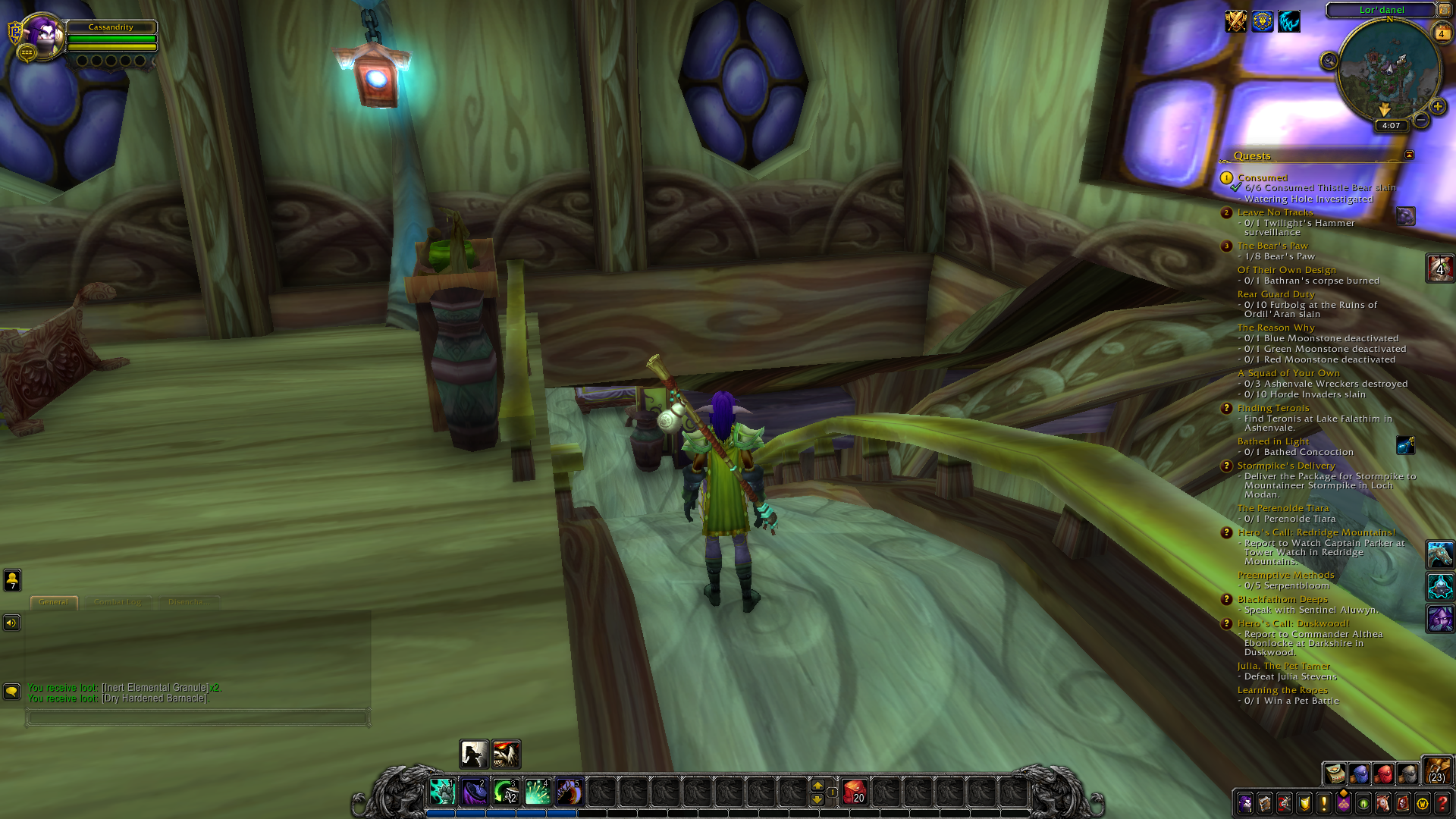 She lives at this Inn now, staring at a baseboard for eternity.

I’ll be honest ⁠— after some time with each, I don’t love either version of WoW. I’ve given it an honest effort multiple times throughout the years, and at no point have I felt hooked the way I do in FFXIV.

However, if you were to ask me which version I’m likely to play more, I’d tell you WoW Classic.

I’d be lying, of course, if I said this wasn’t due to any external social pressures. With many of my friends swept up in Wow Classic fever, of course I feel compelled to do the same.

But, here’s the thing ⁠— that’s the point.

WoW Classic leans into the “MM” part of an MMO. In order to make the most efficient use of your time and make progress, you must be constantly grouping up, hanging out with people, tackling the world together.

I enjoyed decimating the forest as Cassandrity, but I did it alone. And while my friends could’ve joined me, there was little point to do so. I had fun, but in the end, I got the same enjoyment I would’ve gotten from any other RPG. And those I don’t have to pay monthly for. 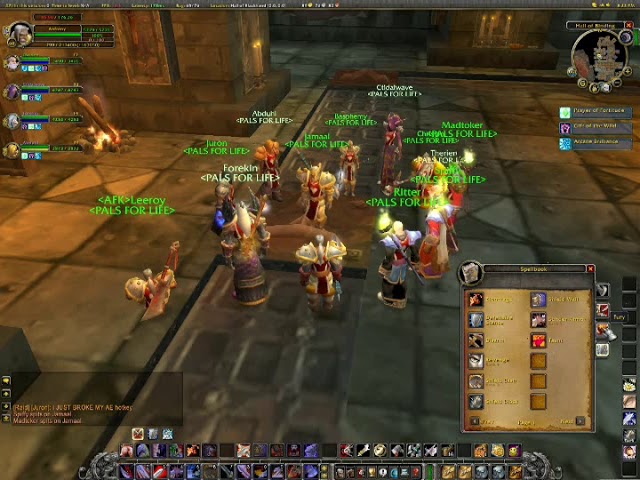 WoW Classic feels like an experience I can’t get anywhere else. The world is surrounded with people constantly, people who not only want to play with you, but need to. Mages are dumping conjured food on me. Druids are casting buffs on strangers as they pass through town. Strangers are requesting my assistance specifically to make use of my Devotion Aura, an ability I don’t rightly understand myself, but they do, and they want it.

There are many people out there who think WoW Classic is a fad, one which will soon pass in time. This very well may be the case; within a month, I wouldn’t be surprised if the number of concurrent players drops off significantly. However, for the time being WoW Classic is bustling with activity. The streets of Stormwind are full of players excited to return to the world they once knew.

I’m not sure how many of them are like me, discovering Azeroth for the first time, but as a WoW outsider, I finally see what the appeal of Azeroth was in the first place.