Dota 2's Battle Pass features a new special co-op mode, and it owns. Hop on into the Labyrinth and enjoy a Diabloesque adventure.

Dota 2’s Battle Pass is out! Another year, another series of blessing wheels to spin and treasures to open before The International — well, except. You know. 2020. Say goodbye to TI this year, folks. Sorry Sweden. Better luck next year on hosting an International.

The good news is if there was ever a Battle Pass I’d want to see extended through 2021, it’s this one, due in no small part to the Aghanim’s Labyrinth event. Yes, that’s right — the eponymous wizard of DOTA’s most powerful item takes the stage.

Looking a little more squid-like than you might expect.

This time, however, Valve has nailed the formula. I thought it would be worthwhile to walk through a standard run and explain why Aghanhim’s Labyrinth feels so much more successful. 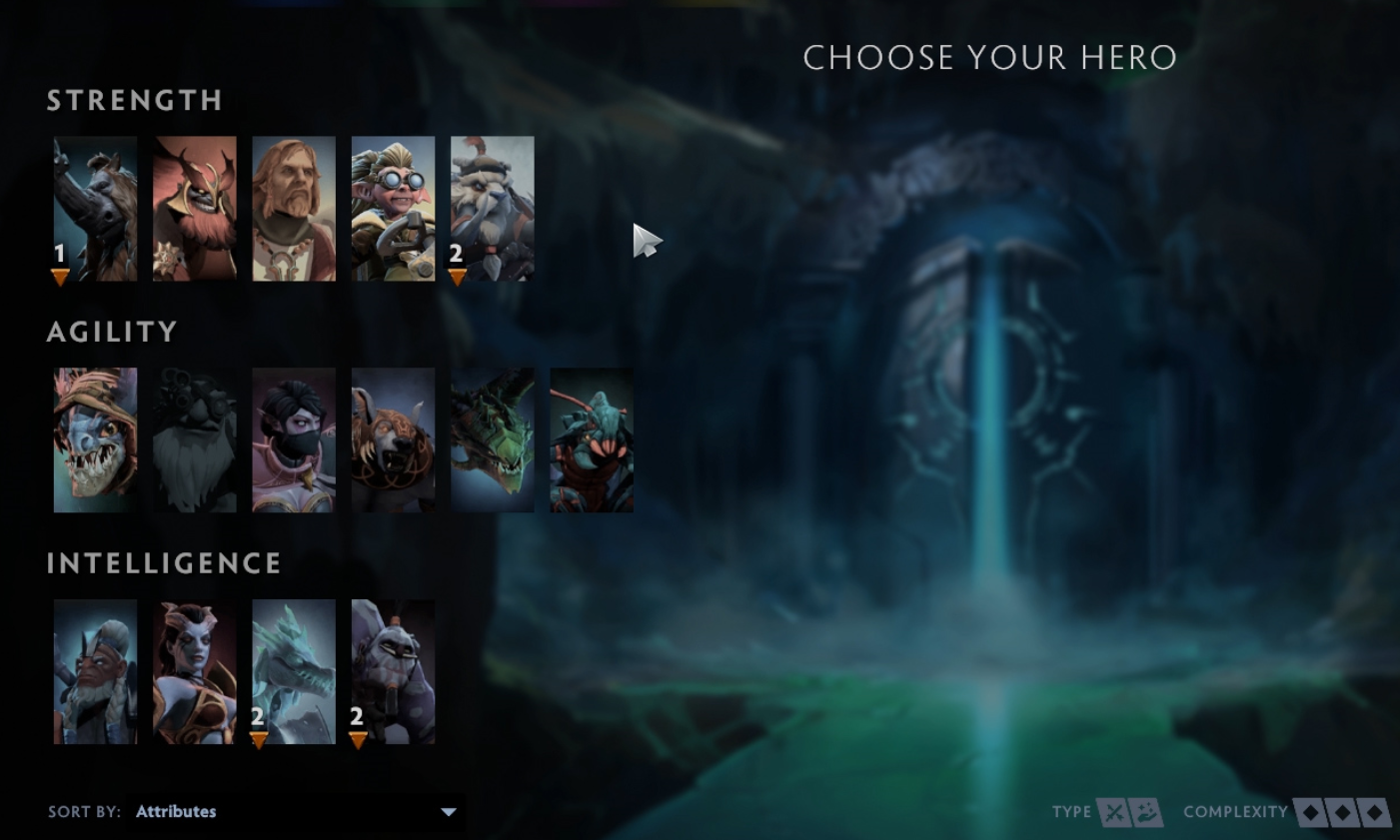 DOTA 2 has over 100 heroes. The list of available picks for the Labyrinth is mercifully culled.

Everyone selects their hero from a limited assortment. Team composition is key — you’ll want at least one high damage dealer, one tanky hero capable of stunning a crowd, and a support to heal. Once your crew of four is assembled, it’s time to enter the Labyrinth. 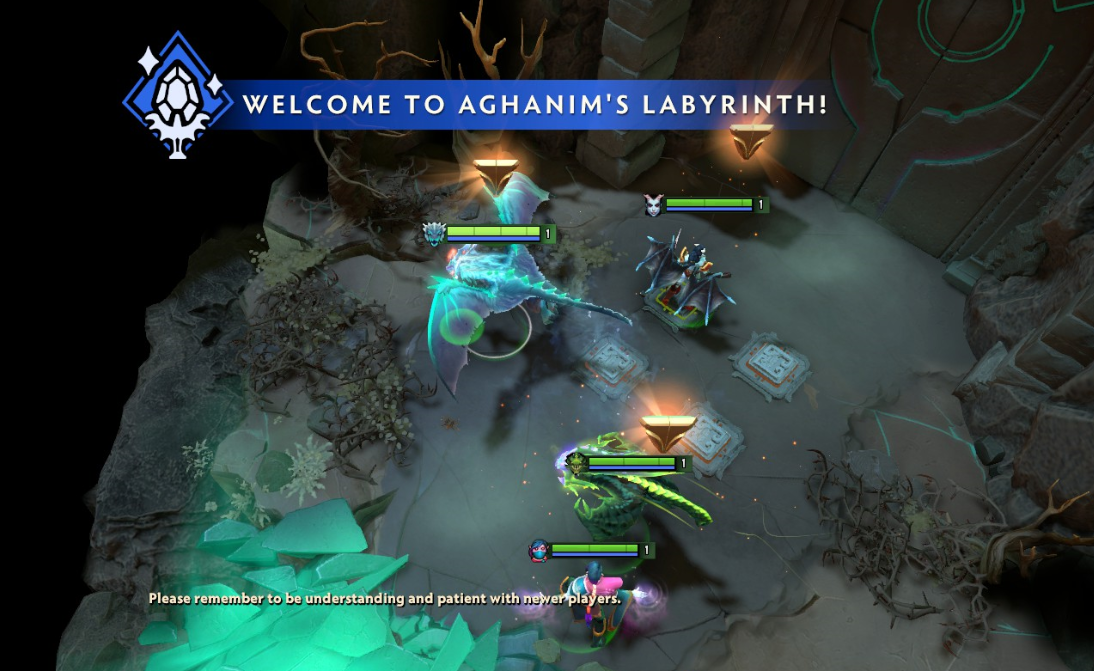 There’s a few of these "everyone step on a button" moments.

Now for the first major change from previous 4 player co-op events — everyone chooses a talent. 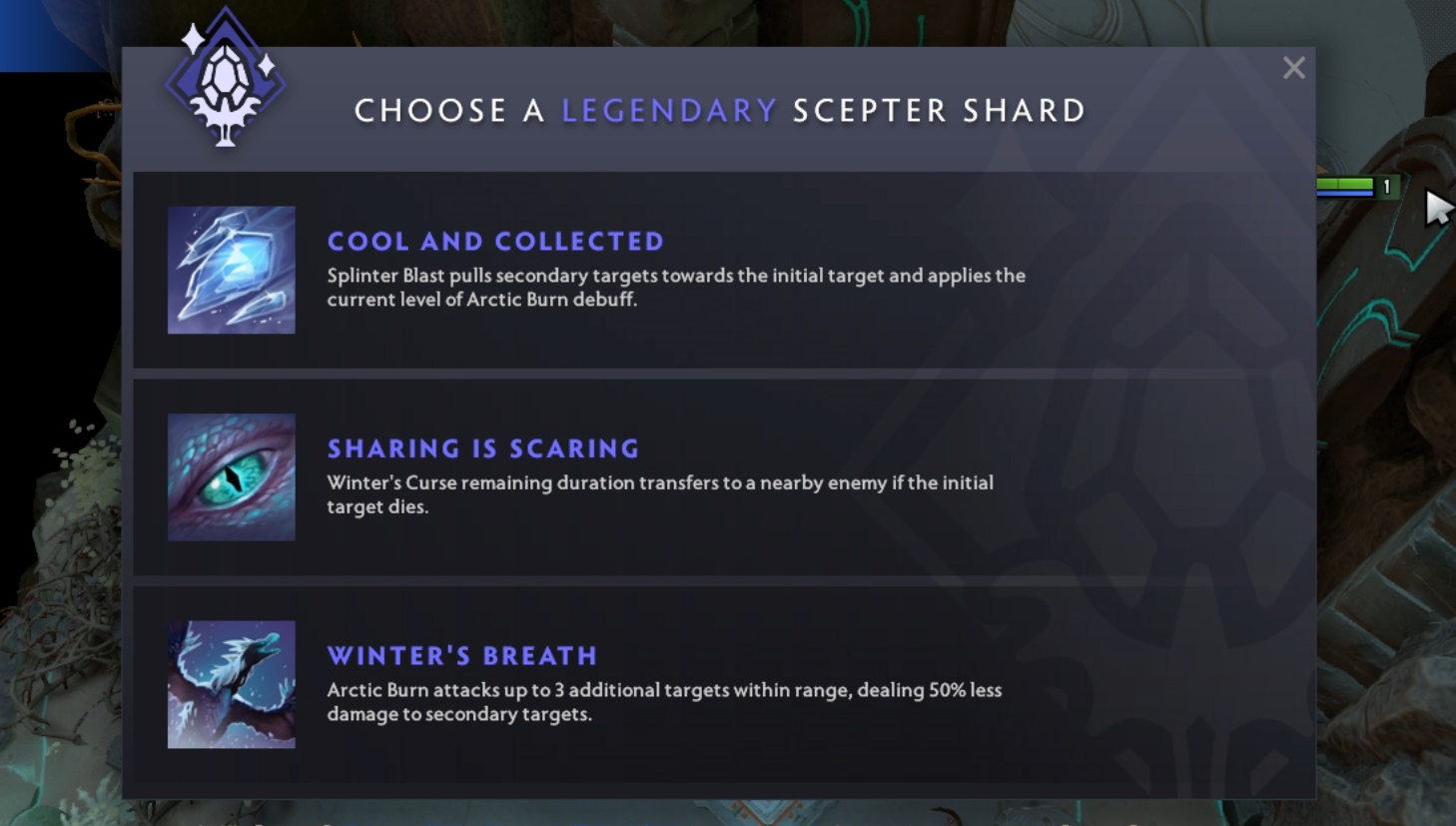 These talents modify the way one of your abilities work by augmenting damage and area of effect, or to provide additional healing. As you’ll soon see, most engagements involve slaying rooms full of enemies, and these augmentations modify standard abilities to be better suited for large scale encounters. This, I think, was one of the key failings in previous attempts. Dota heroes are usually designed with only a few foes in mind, not an entire mob.

A new augmentation awaits at the end of each successful room, but the majority are simple damage or cooldown reduction boosts. The impactful ones only occur after each boss (or elite challenge rooms, if your team feels brave).

The presentation throughout is excellent. an announcer guides the way, sometimes making specific call-outs on ability or item choices. He mocks you for lagging behind and cracks many jokes at your fortune and misfortune alike.

One unfortunate note. The biggest problem plaguing this mode currently is disconnects. While disconnected characters can be controlled, their gold cannot be spent and they recieve no more shards. 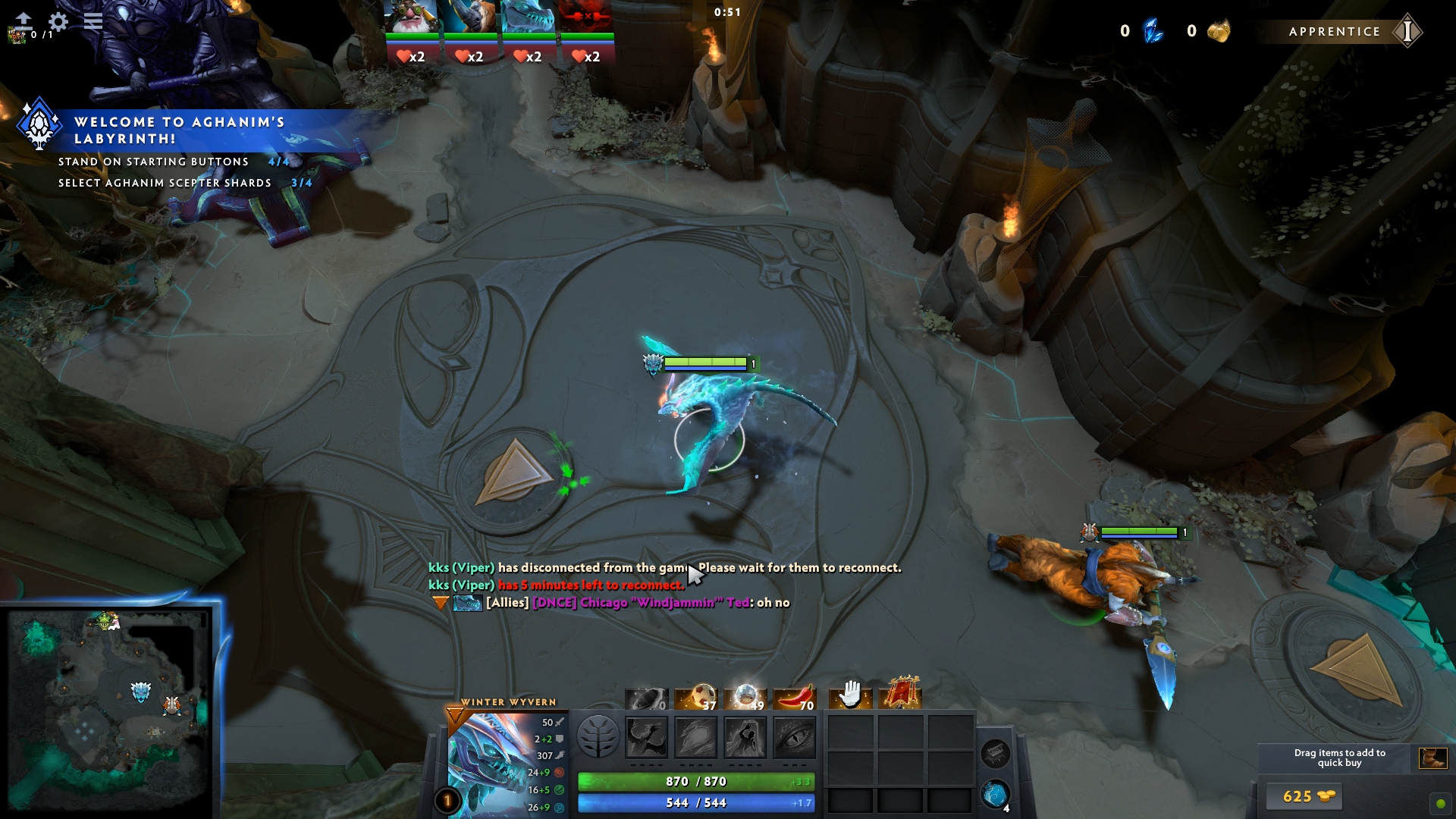 Micromanagement can only go so far. And, for the ultimate betrayal, disconnected heroes can’t participate in bonus rounds, which often means you can’t start one at all. The run ends then and there.

From here, you’ll embark on a series of challenges. Which ones you get, including the bosses and bonus gold events, will be randomized.

Rather than detail all possible challenges, here’s a brief list of hints to help you succeed.

Do not only buy boots and assume it will be enough. Being light on your feet is key, especially against the sorcerer supreme himself (more on that later). Aside from boots, I highly recommend Euul’s Scepter. Casting it on yourself or a teammate can save you from pesky player-killing mechanics, or get you out of trouble if surrounded. 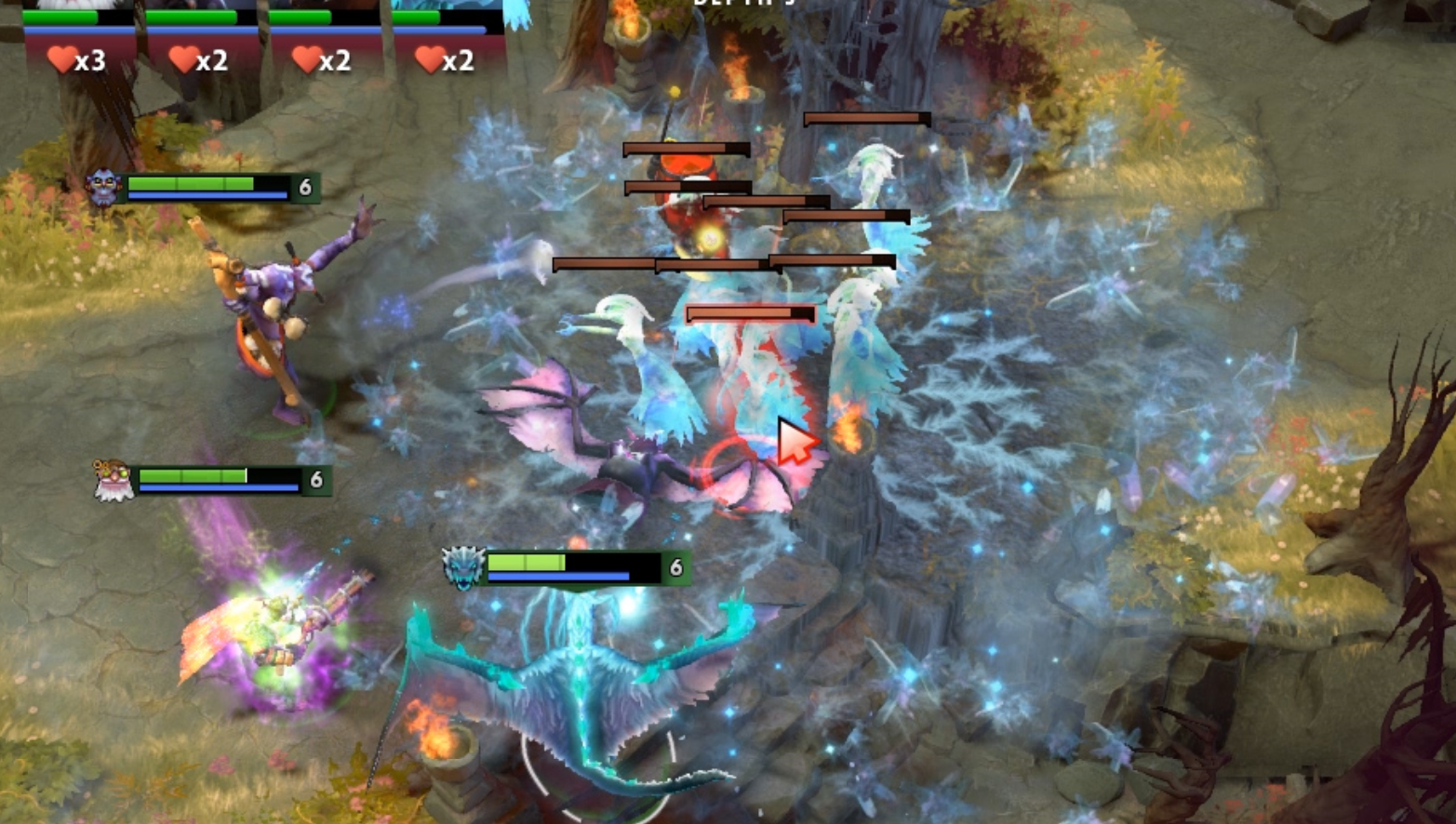 High movement speed will keep ghosties from nipping at your heels.

A number of rooms will contain stone portals. They look like this.

Kill them. Please kill them. Please oh please. The longer they sit out, the more enemies they’ll spawn in. I’ve seen many teams wipe because they neglected these stone pedestals and were overrun by the mob. 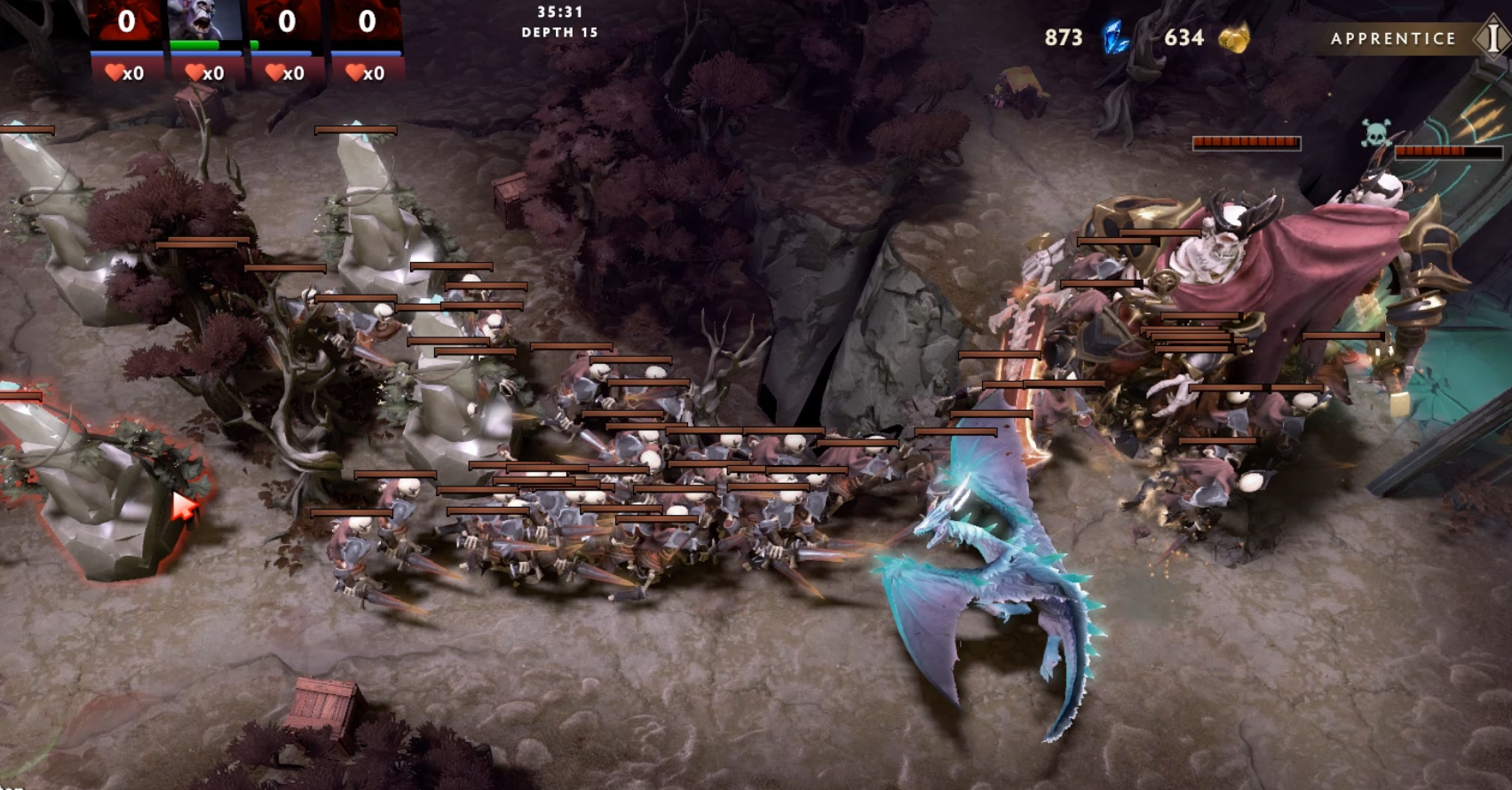 A grim preview of what happens if you don’t.

In many rooms, enemies will only approach when attacked. It’s best to take it slow and limit your engagements as much as possible, no matter how OP your team may seem.

This is especially true in the Naga Siren challenge, The Soothing Sound of Sirens. See these mines to the north? 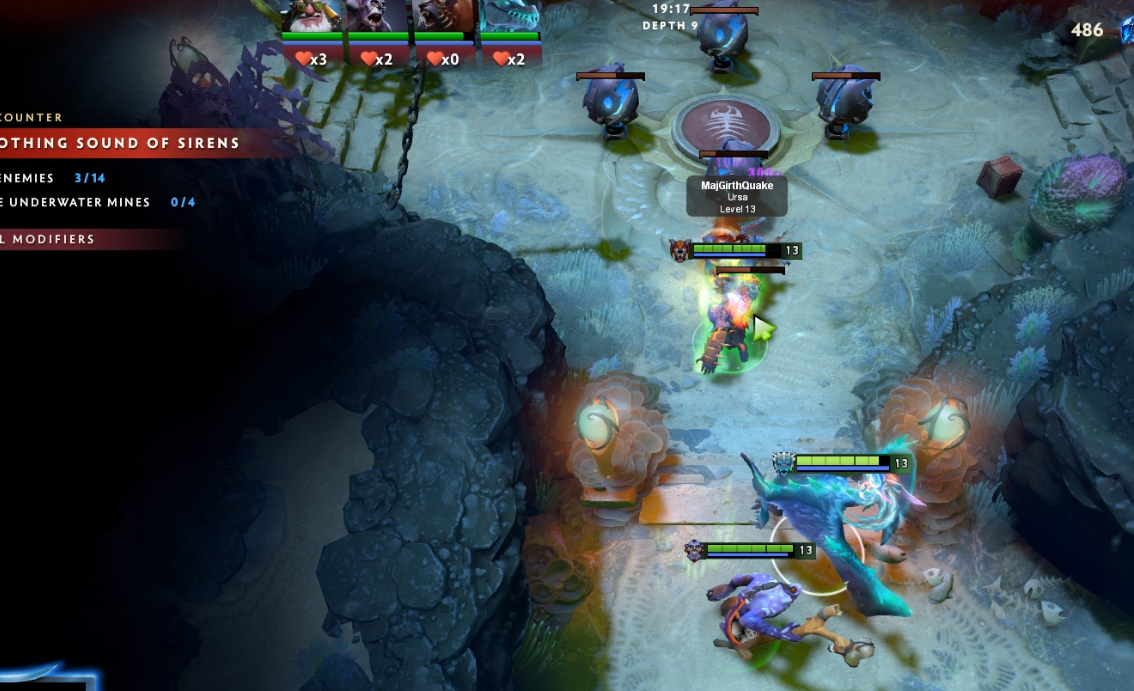 Do not detonate more than one at a time. Each one brings in a whole team of Sirens, so if you thrash the whole lot, you’ll quickly be stunned into oblivion. I see this room wipe the most teams.

When you have the option to go at your own pace, take it slow. Some maps become completely unwinnable otherwise.

Get more than one of these birds angry and this fight becomes hell.

Another good time to pace yourself — there a few rooms where the whole team will be turned into donkeys and forced to navigate traps. Observe the patterns, identify spots where you can take a breather, and get there. 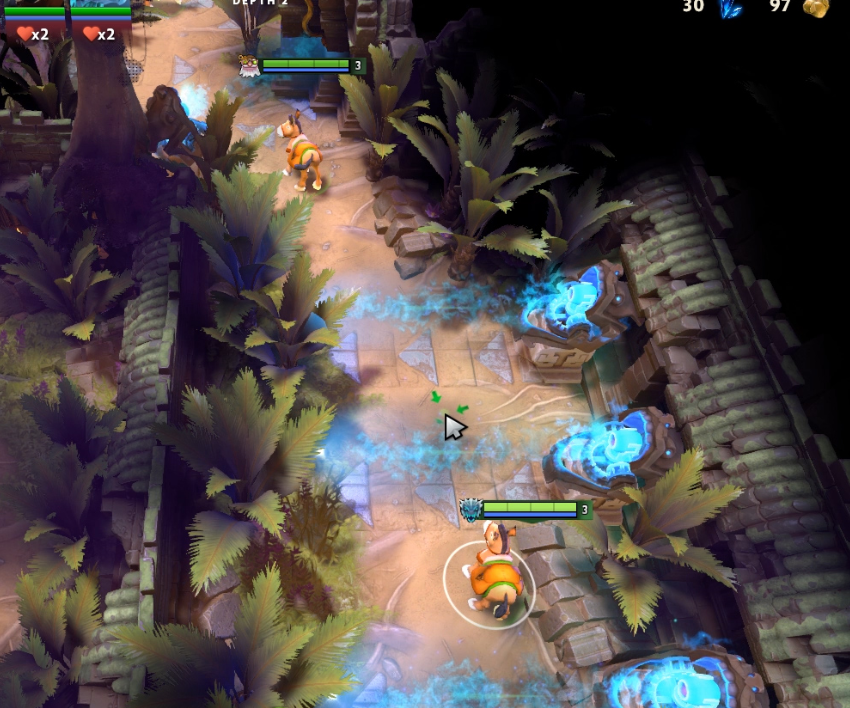 If someone tells you to rush here, they are bad people.

Every 5 rooms or so, you’ll square off against a boss. They’re usually pretty recognizable faces, like Timbersaw here... 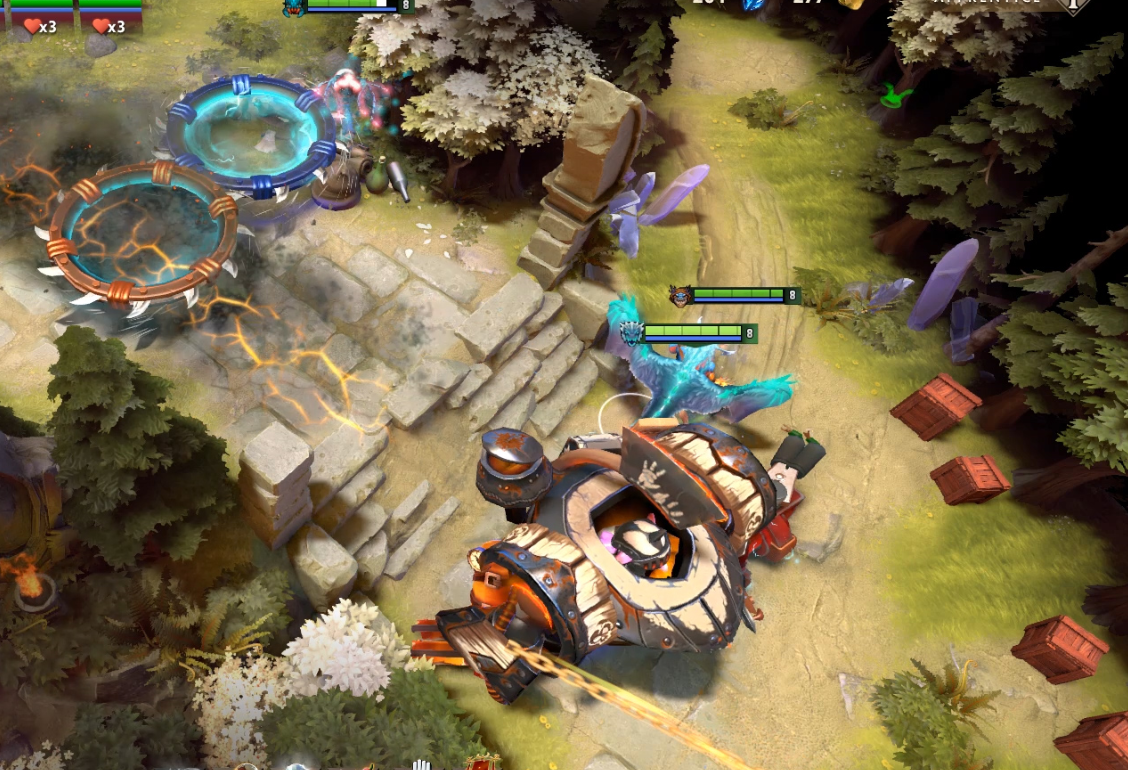 Like any good boss fight, there’s lots to keep track of here. You’ll be rewarded at the end of each with a special ability augmentation, followed by a gold event.

My personal favorites are penguin sledding... 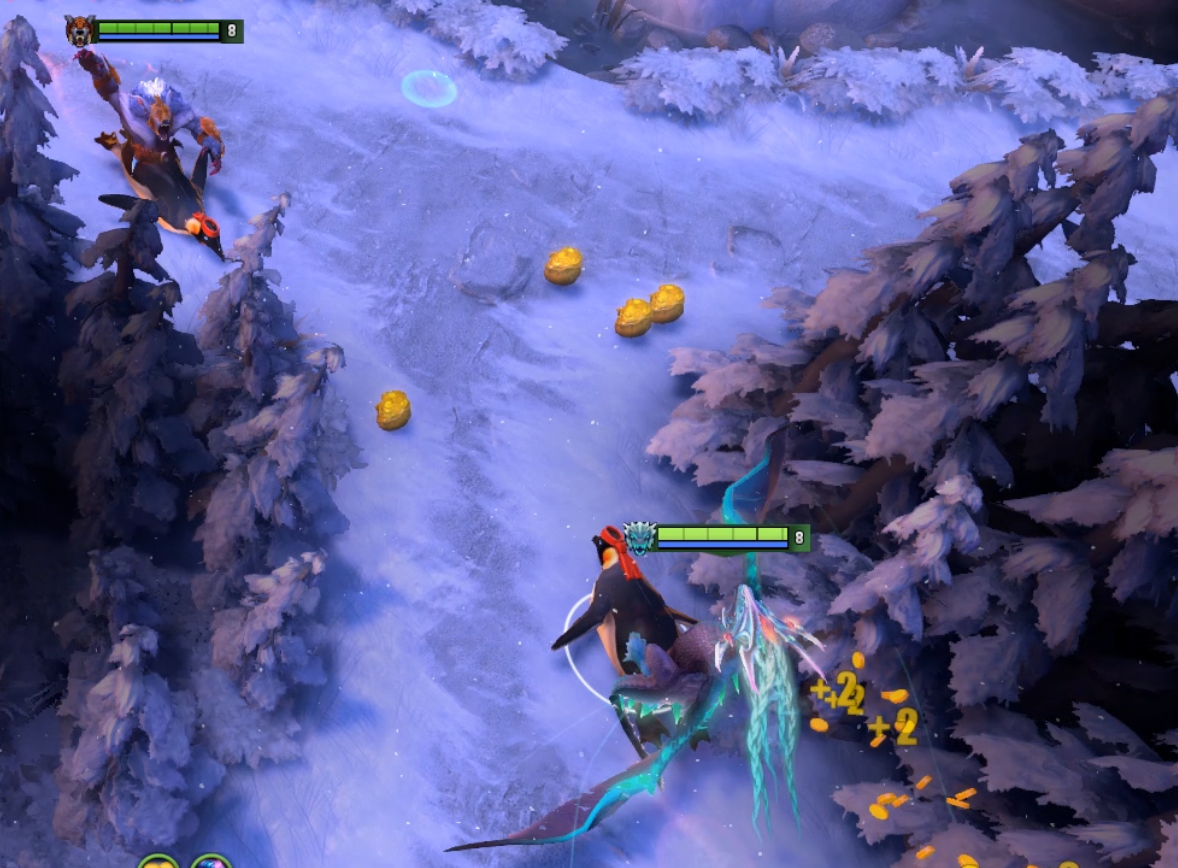 Don’t ask why a Wyvern needs to ride a penguin.

And the one where everyone turns into rolling armadillos.

You will face three bosses in total in a single run. A first boss, a mid-boss, and then... the finale.

If you’re lucky enough to make it to the end, congratulations. It’s time to square off against Aghanhim himself.

This is a doozy of a battle. Spikes fly everywhere, spears shoot across the room. There’s going to be a lot to dodge, but the big thing to watch for is this awful homing laser.

Only way to avoid this is running. If you don’t have enough movement speed by this point, this thing’ll catch and kill you in seconds.

One other nasty trick Aghanhim has is to lock your abilities in a crystal prison. Smash crystals to get 'em back. 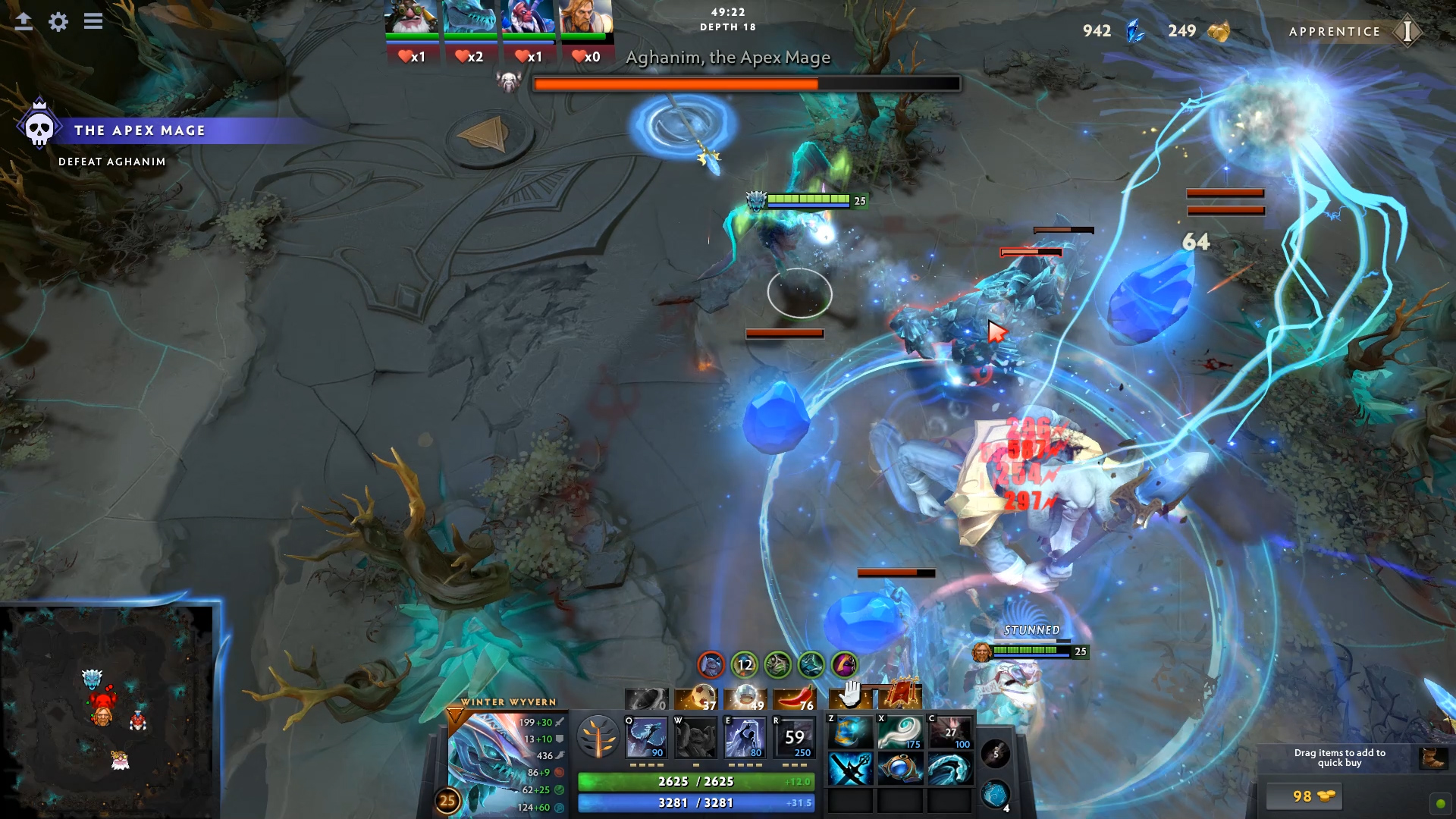 Okay, to the unintiated, lots going on in this picture. I know. But note the W ability missing from the bar down there.

If you succeed, congratulations! Enjoy your rewards... and your new available difficulty level, should you choose to embrace true madness. If not, no worries — you’ll have something to show for your run.

Every run of Aghanim’s Labyrinth nets you both shards and battle pass points. There’s a limit to how many you can earn each week, but you’ll earn some no matter how brief the run is. These shards are redeemed for permanent upgrades in future attempts. Some are simple stat boosts, but others are pretty tremendous. In the strength tree, you can pick up permanent damage reflection, and over in intelligence, you can start every run with an extra life.

The talent tree options are vast.

And there you have it — a little tour of what awaits in the Labyrinth. This is a rare case where even if you have an aversion to Dota 2, I might recommend dipping in to check out what the Labyrinth has to offer. A four player co-op challenge is different enough from usual Dota 2 that you may find a pleasant experience awaits with three other friends. A pleasant free experience, even.

The Labyrinth will be open until the 2020 Battle Pass ends and we are freed from our Coronavirus-ridden hellscape. So possibly never.