Disclosure: this game was NOT provided by Square Enix. It was, however, provided by Associate Roguelike Editor Fugimax. Thank you. I think.

Don’t worry, I just want to have a talk. A little chat. A heart to heart, if you will.

Are you someone who still gets excited for the next Yuji Naka game?

Listen, I loved Sonic. Those were some great old school games. He had red sneakers, went fast, and had attitude. What a guy.

Did you say Sonic Mania, an excellent Sonic game Yuji Naka had zero involvement in?

Maybe you said Sonic and Mario at the Olympic Games. Any of them. A series made by the Sega Sports team, also with no involvement from Yuji Naka. 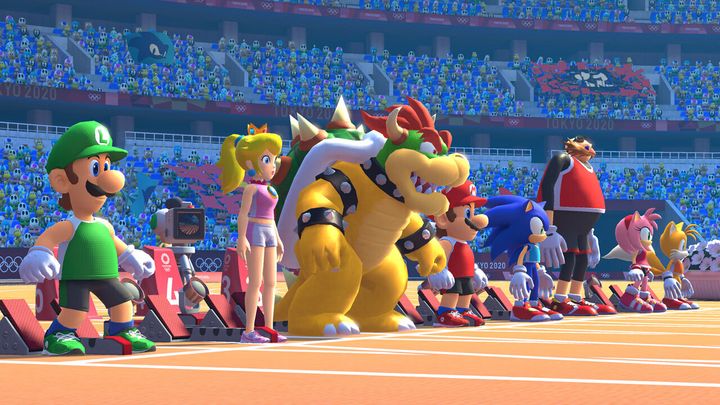 The only game where Mario can beat Sonic in the 100 meter dash.

Now, lightning round. Was your favorite Sonic game Sonic and the Black Knight? 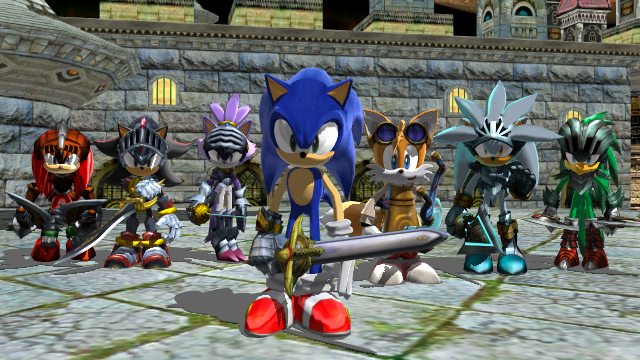 A quality product. You can already tell.

Maybe it was Sonic Unleashed? 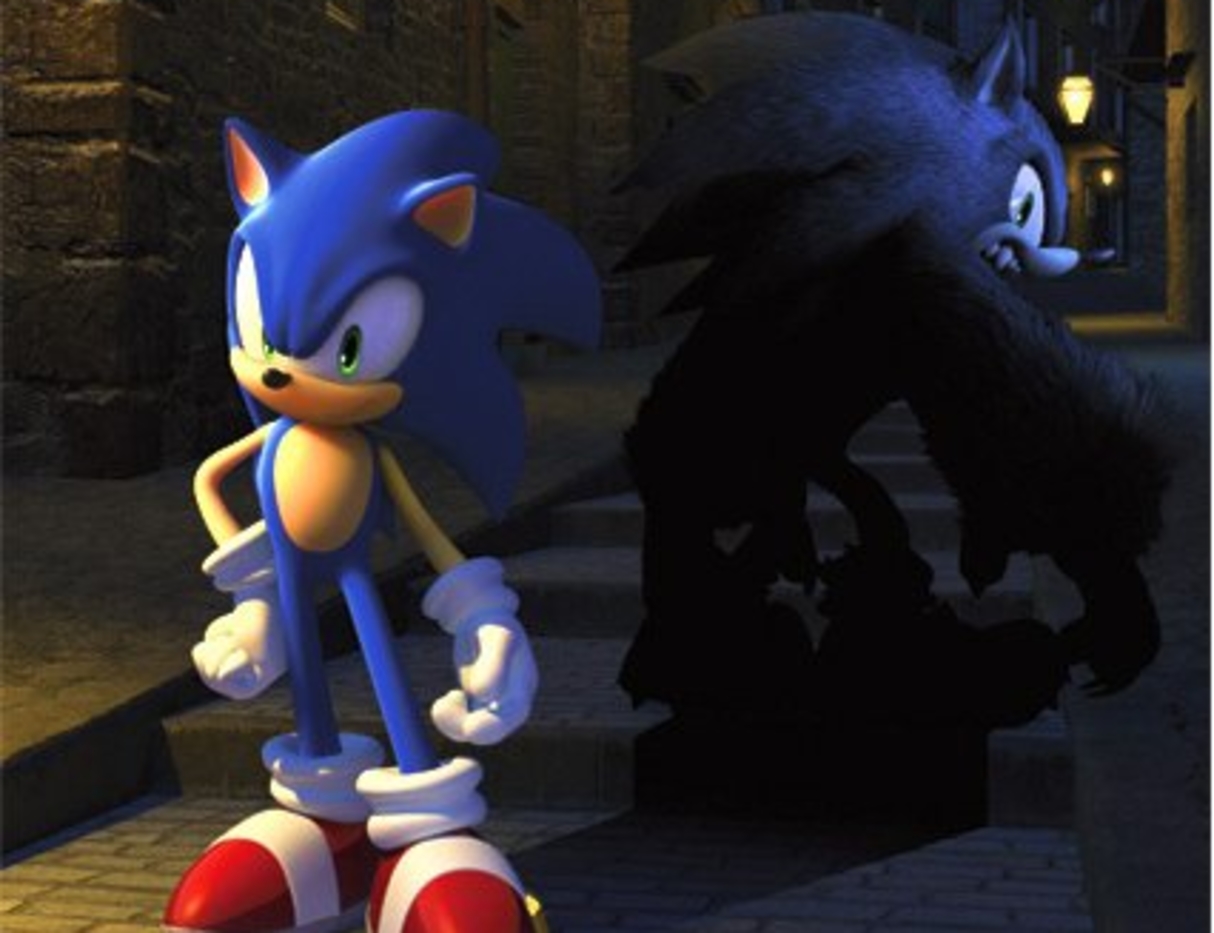 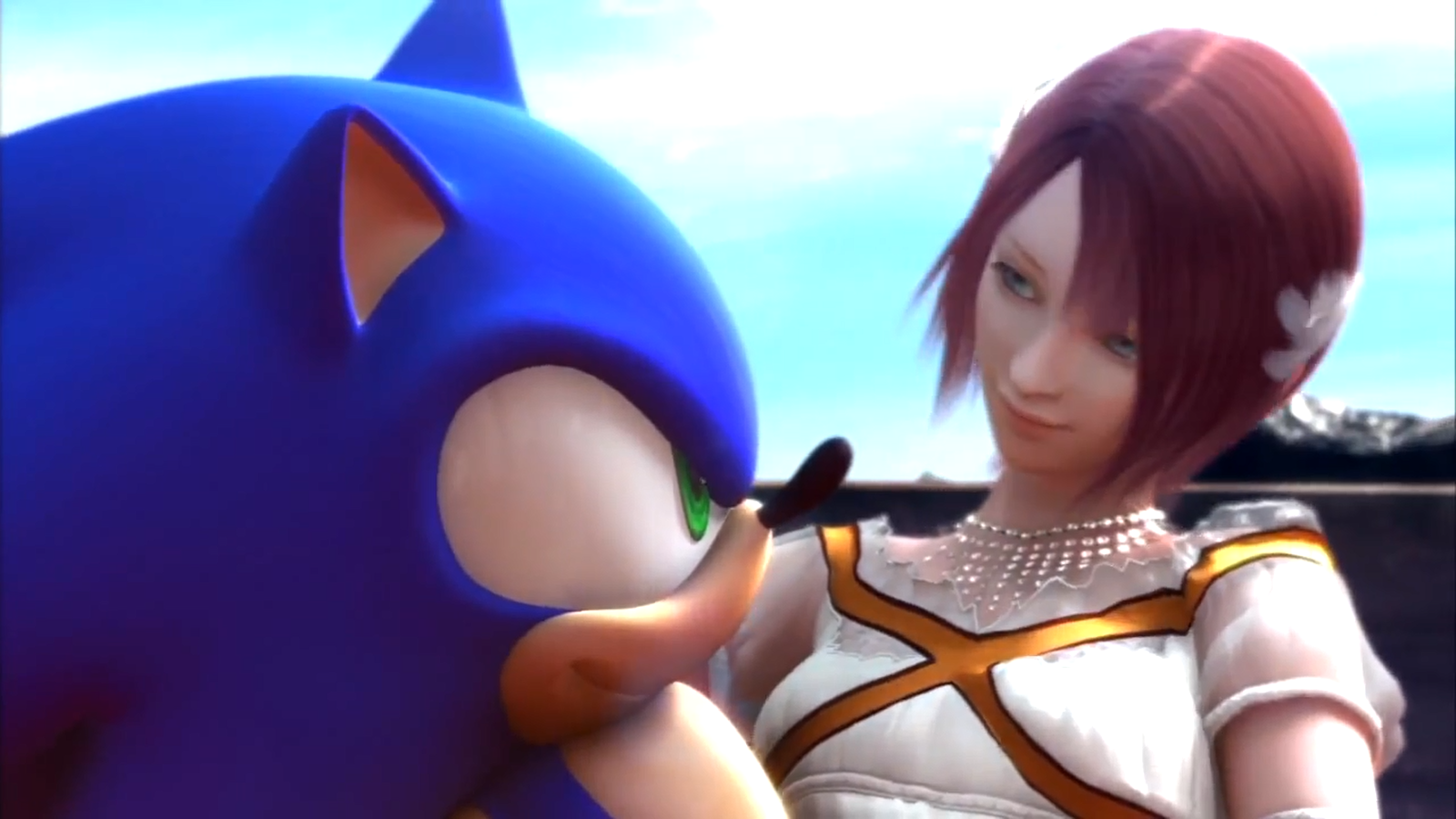 Great. Love it. Thank you. Just what we wanted.

Maybe Sonic was too limiting. We can expand the scope to other Yuji Naka projects. Consider maybe... Rodea the Sky Soldier? 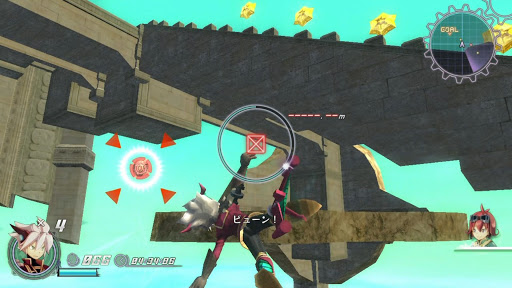 First you’re hearing of this one, I bet, right? Just guess what kind of game it is from this screenshot. I dare you.

I’m sure you’ve guessed the punchline by now — these games are bad. Unapologetically so. Terribly atrocious. Is it entirely Yuji Naka’s fault the last decade or so of his career has been marred by bad products? I’ve no way to know. But I do know it's been so long since a quality Yuji Naka product that it’s time to stop getting excited just because his name is on the box.

And on that note, hello Balan’s Wonderworld.

Let’s start with the good stuff. This’ll be short.

They’re vivid, elaborate, dripping with creativity, and suggest a world of wonder and whimsy that does not actually exist.

Balan Wonderworld is a One Button Game 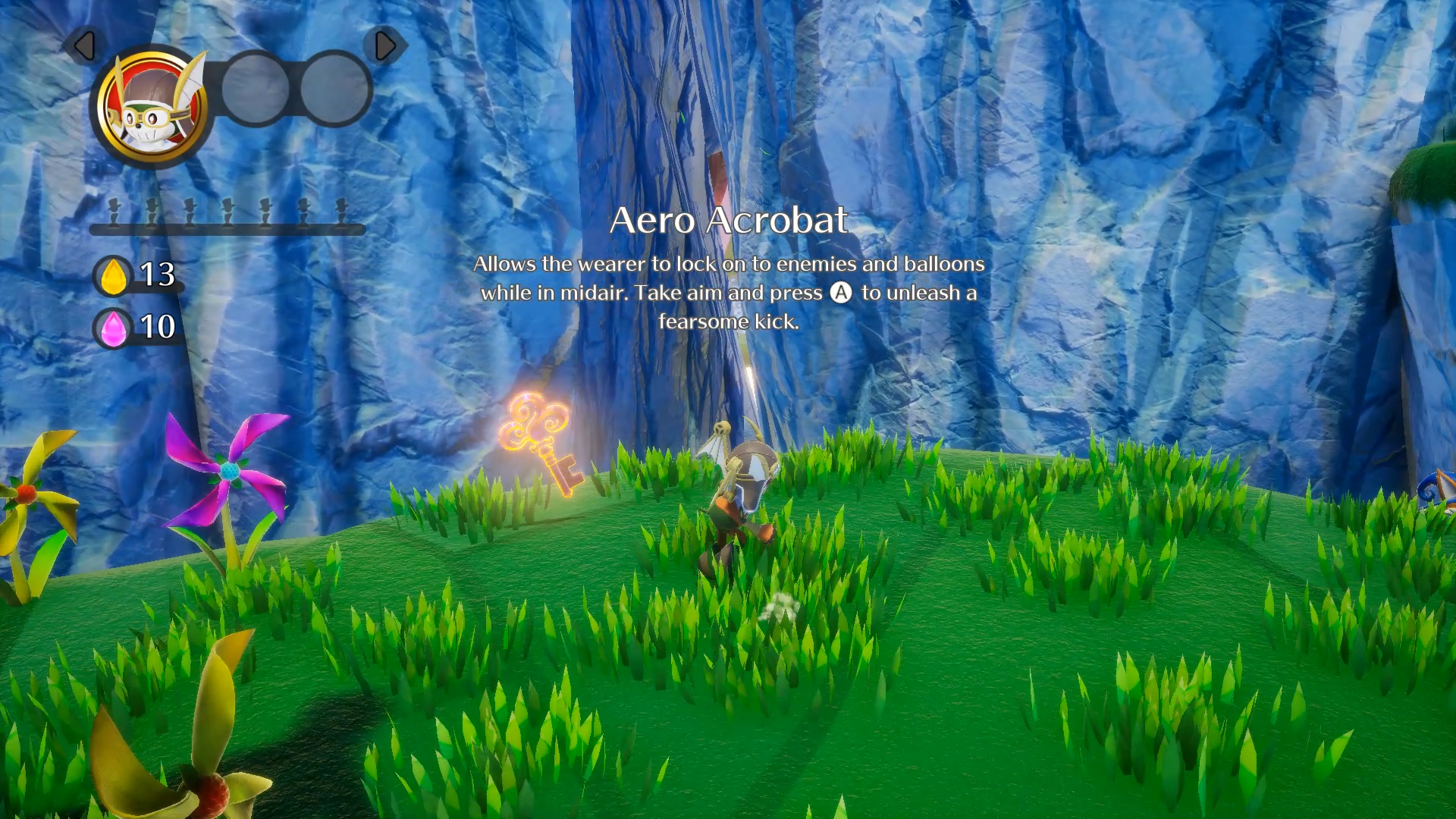 Now to be clear, there is absolutely nothing wrong — inherently — with a one button game. Just look at something like OlliOlli, where you skateboard down a 2D plane with single presses. Or say Bit.Trip Runner. Even something like say, Super Meat Boy is primarily played with one button, and I don’t think anyone would call it lesser for that. 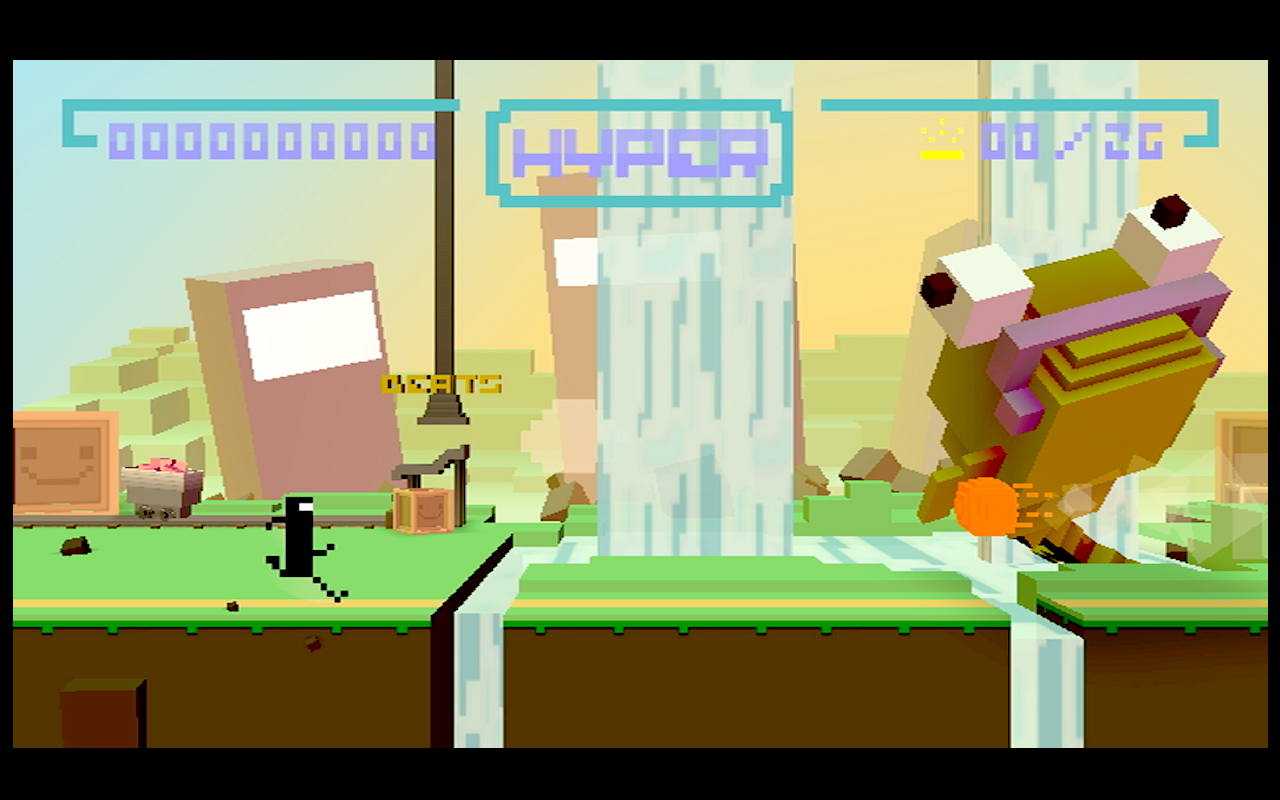 I would much rather be Commander Video right now.

Balan Wonderworld is full of an endless array of costumes, all of which have one function. On face level, this isn't the worst idea. For perhaps the best example of this execution, look no further than Majora’s Mask. That game also featured a wide array of masks, most of which served only a single function. Great game. We’re going to compare Majora and Balan a couple times in this article. Is that fair? Nope. Do I care? Nope. 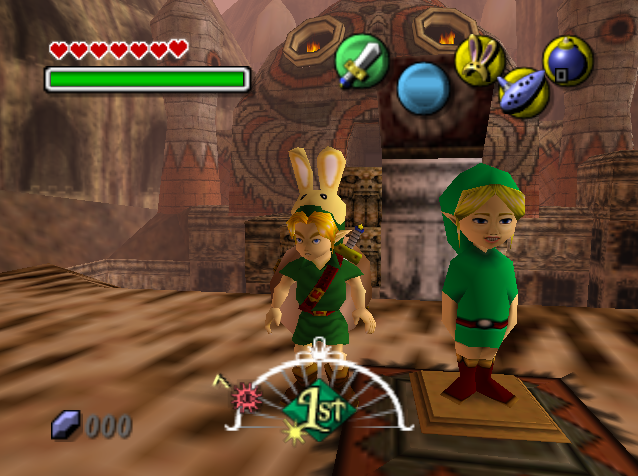 Was Majora ahead of its time, or is Balan behind the times? There is a right answer here.

Balan Wonderworld is a 3D platformer. This means you’re required to do a lot of jumping. Naturally, this means a vast amount of suits help you jump in a variety of ways.... But not all of them. You can only have three at any time, so naturally, you’ll want to keep at least one or two jumping suits on hand. But when you get hit, you lose the suit you currently have on.

It is possible, nay, highly common, to end up in a situation where you lose your ability to jump. From there it’s time to backtrack the fuck across the stage to get your suit back, or at least find a serviceable alternative. The enemies in a given zone respawn once you’ve walked far enough away, meaning you could potentially lose the new suit on the way back again.

But don’t worry, there’s another way to lose your suits. Remember, you can only have three at once — so if you pick up another, kiss one of your suits in reserve goodbye. Which one? Fuck you, that’s which one.

Bye robot costume. Sorry, had to get rid of you for another goddamn sheep.

Now granted, the suit replaced is not gone forever. It goes into your wardrobe, which can be accessed from each checkpoint. So you don’t have to go find the suit again, but you do need to go to a checkpoint, which depending on the stage, could be further away than a copy of the suit. The suits in your wardrobe are of limited quantity too, based on how many copies you’ve accidentally erased. 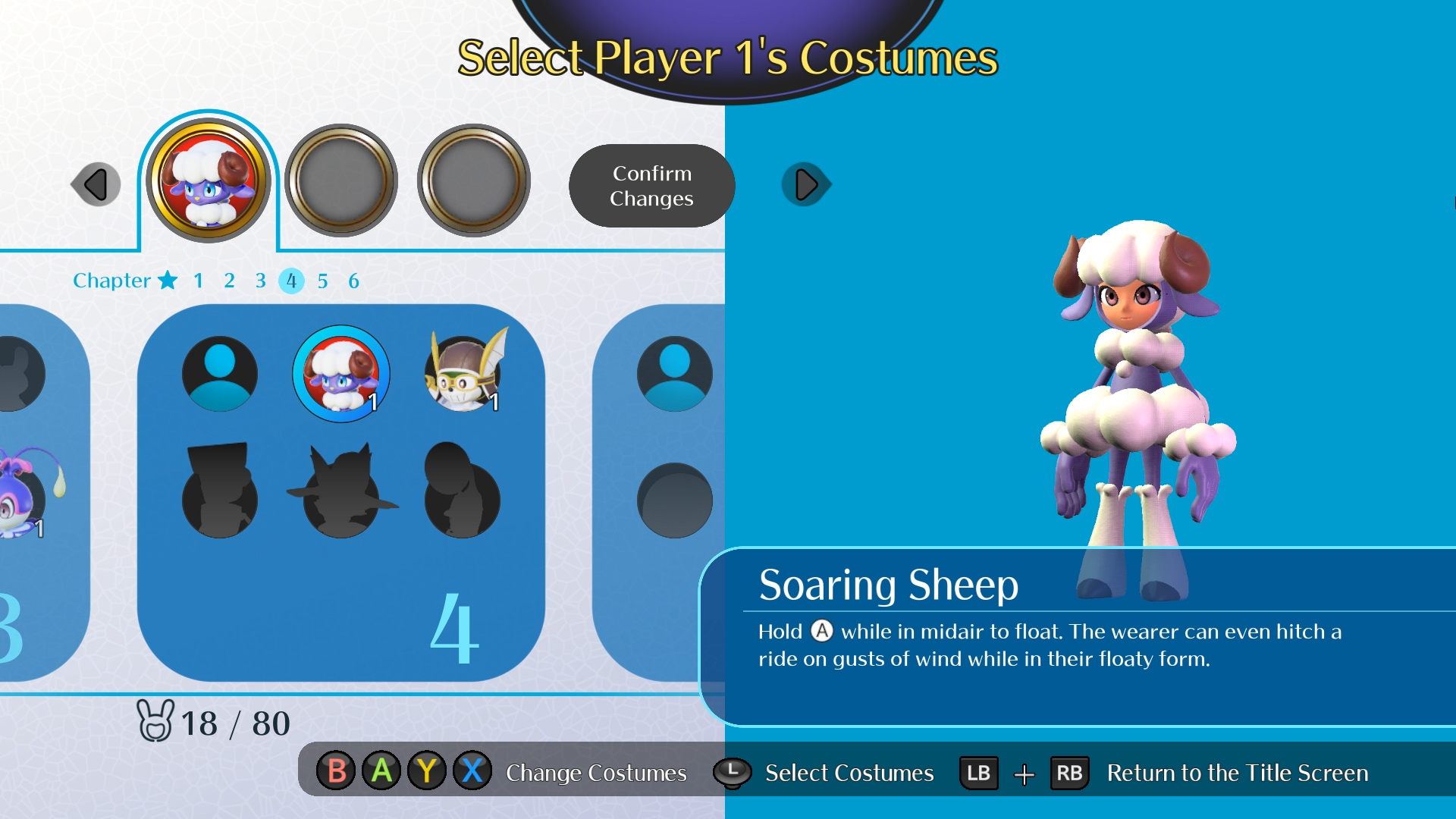 You can retrieve any costumes voluntarily (or accidentally) dismissed from this menu. 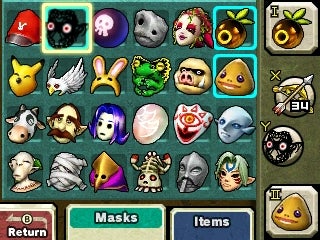 In Majora, masks stay in your inventory. You may swap them out on command. Much like Balan, they are used as necessary tools to progress.

Imagine if in Majora’s Mask the Zora mask went away whenever you got hit, and you had to walk back to the entrance of the Zora dungeon to get it again every time.

It’s an absolute nightmare. A tedious excursion with no end, one you will repeat ad nauseum the entire game because... 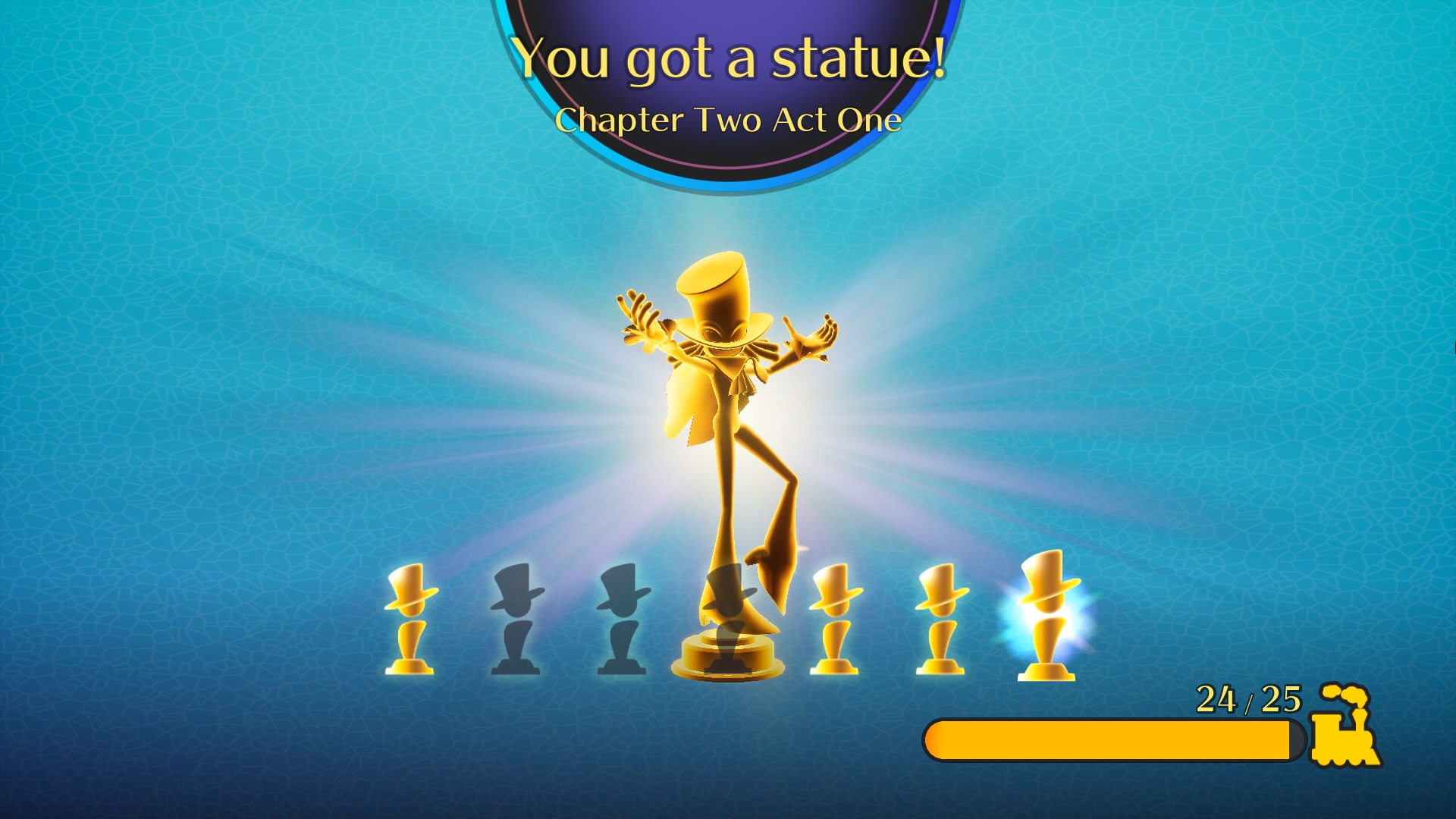 In order to advance to the next world in Balan Wonderworld, you will need to locate Balan Statues.

Only a few of these will be easily accessible with the costumes in the given stage. The rest will require hauling an outfit in from another world. In a better game with the initials M.M., you can freely swap masks at any time to experiment when you notice an out of reach reward.

In Balan, you are punished for experimenting. You should not play this game, but if you do, just look up a guide. Seriously. There’s no fun to be had deducing the right suits and traversing them to the proper world, especially not when failure means leaving the stage to do it all again. 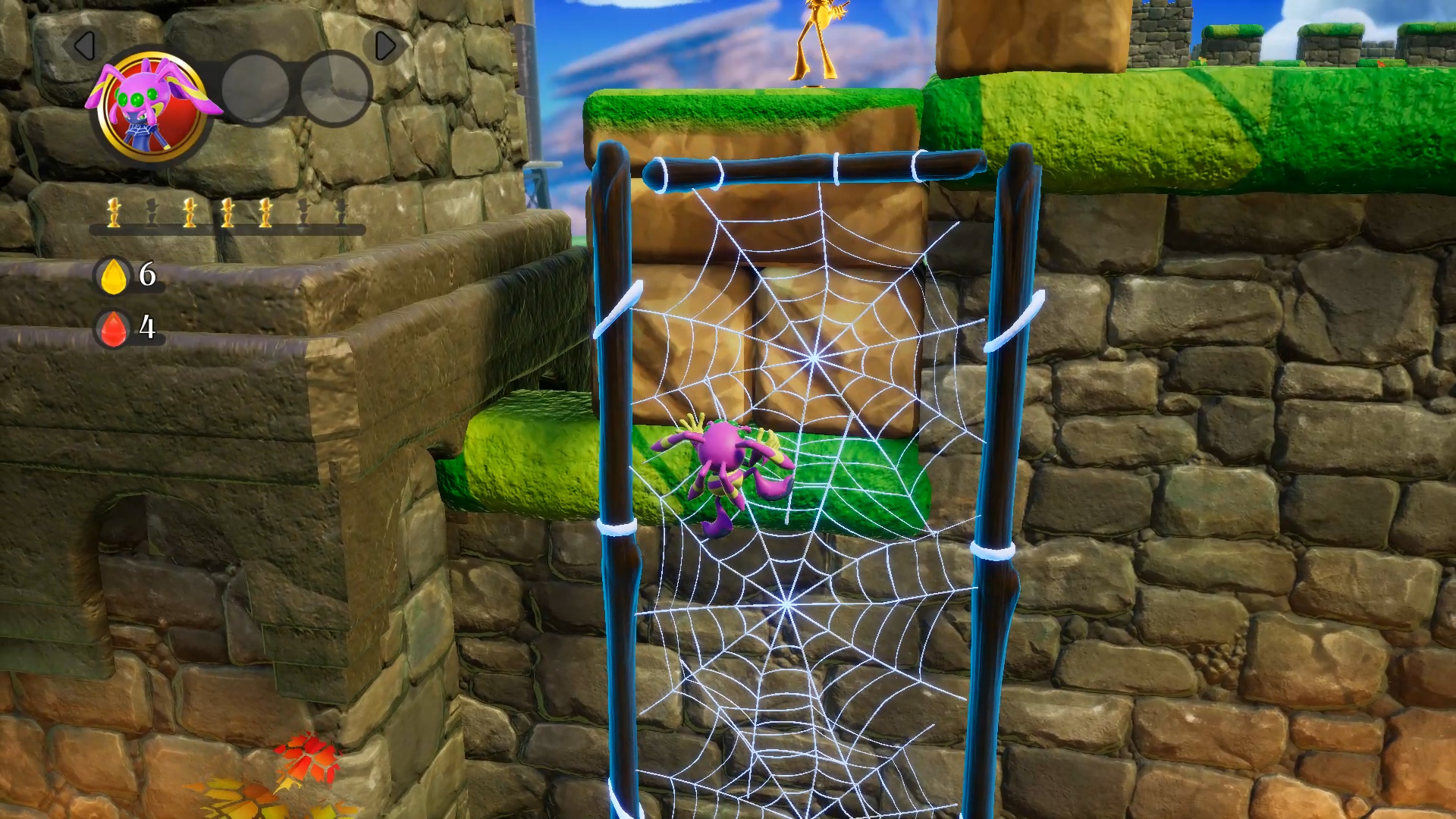 I’m sure you’d like to be able to store costumes voluntarily from any stage you’ve already cleared, right? And just whip them out when needed?

Now, there is one area in the game I feel compelled to praise where the issue of Balan Statues is concerned. The boss fights. 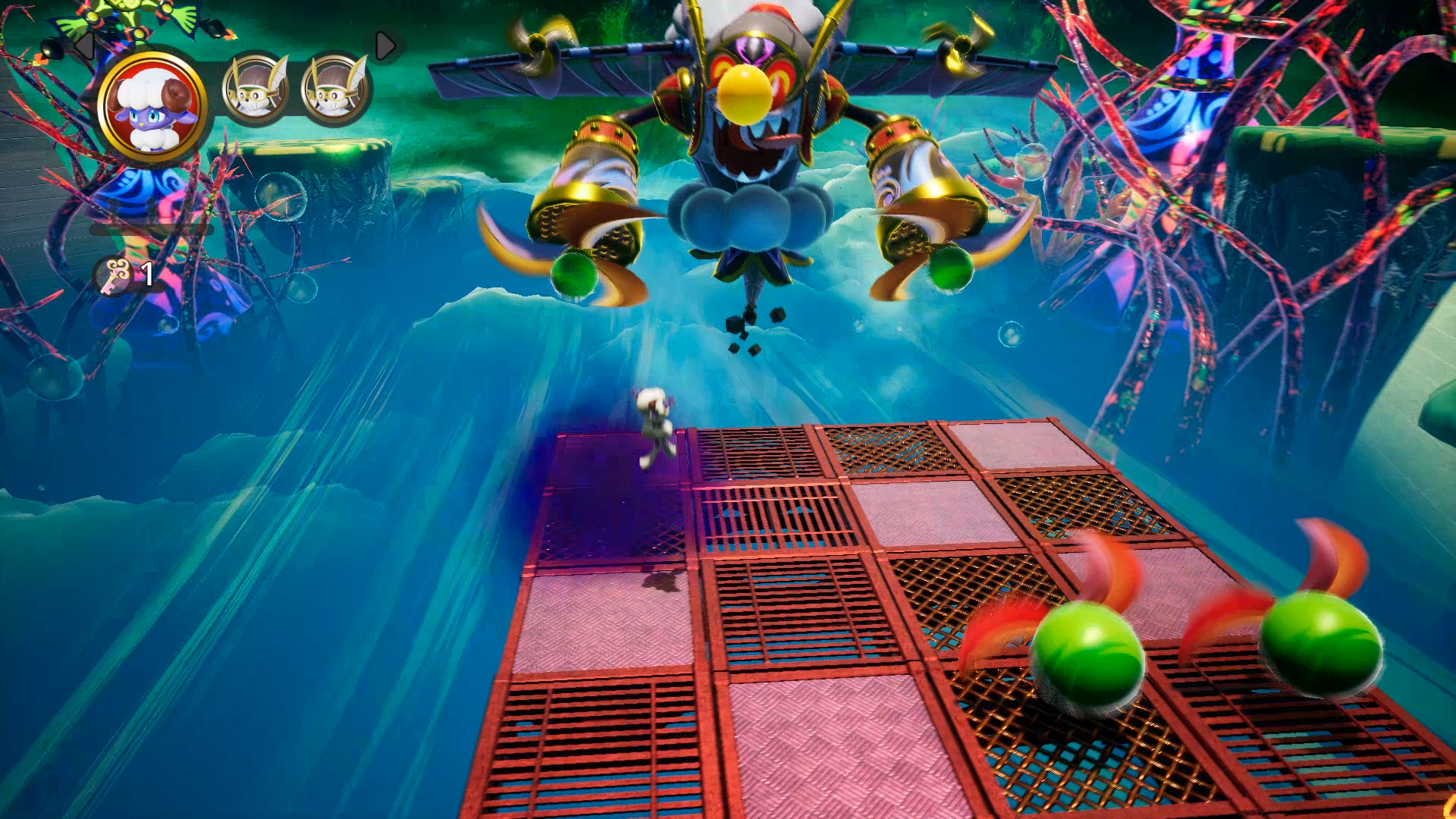 The fights themselves are some of the better content Balan Wonderworld has to offer. For each different method you figure out to damage the boss, you will recieve a Balan Statue. It's a clever way to encourage the player to try out all the costumes available in a fight, rather than simply stick to one.

This court mandated praise is now over. Back to the dunking. 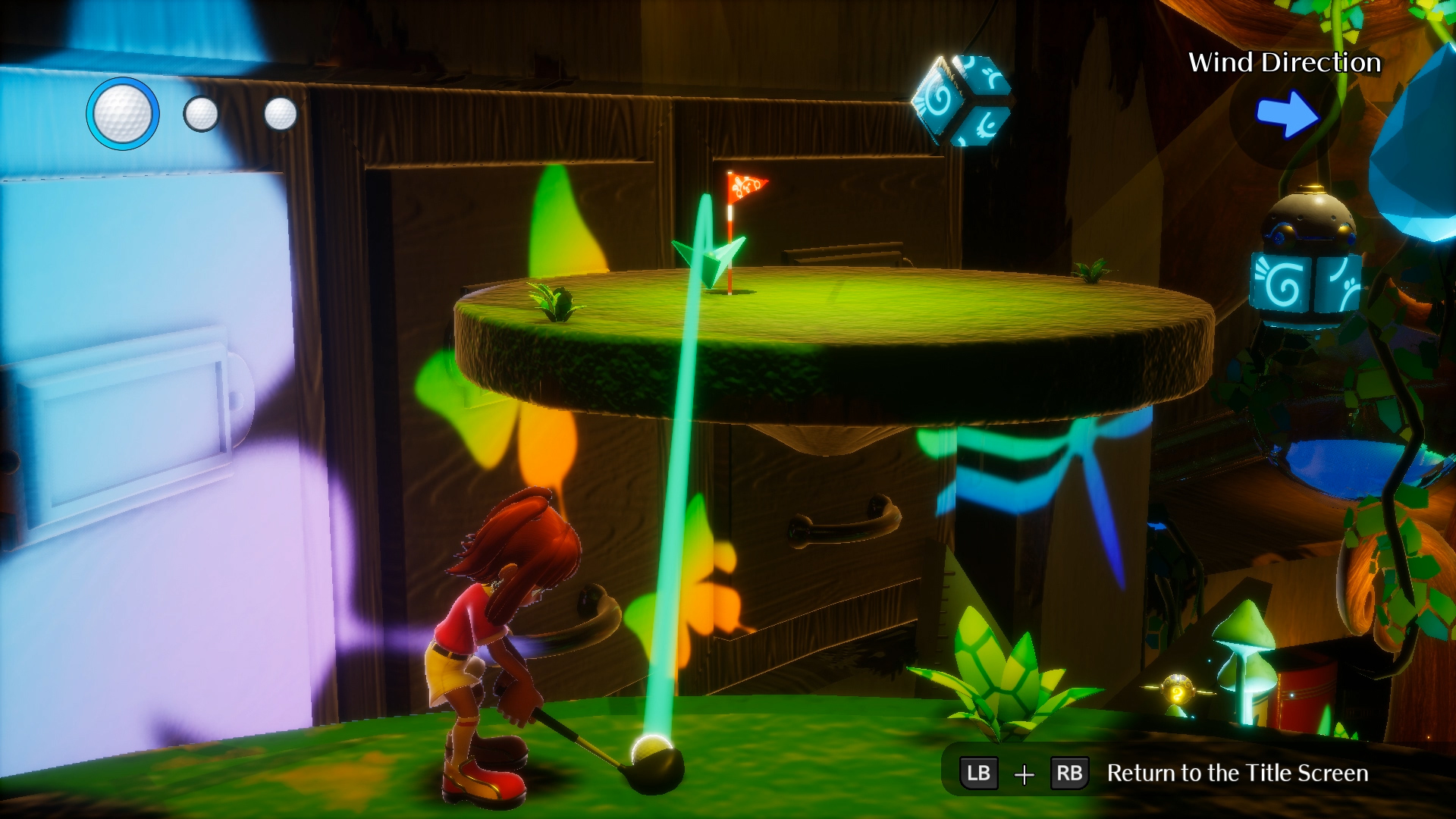 Allow me to reiterate — this is an unpleasant gaming experience overall, and I don’t recommend anyone buy it. However, I will give credit where it’s due. Like with the bosses above it does have some neat ideas, it just tragically fails to capitalize on any of them. It is a living embodiment of the problem the Sonic franchise has faced for more than a decade; a new concept is introduced, then immediately discarded. Not a single one gets any opportunity to flourish.

This bug outfit allows you to fly, but only when the room is dark. In another game, you would be introduced to this concept, then presented with increasing challenges. Maybe in one room, you don’t activate the darkness yourself. Instead it swaps on and off in intervals, and you have to arrive at safe landings in a timely manner. Something like that.

But not in Balan.

In Balan you get the outfit, use it twice, maybe three times, then you’re done with it forever. No additional challenges, no test of skill. At best, you’ll need to take it somewhere else to get a Balan Statue, but there’s no additional challenge there either. It’s just a matter of having the right outfit in the right place. That’s it.

The end result is a game that, despite all the vibrancy and joy in cutscenes, feels lifeless. There’s not really a game here so much as a series of tasks to perform. A series of disconnected things occur, you dance thirteen times with strangers, then it’s over. Now granted, that’s pretty reductive of me to say, but Balan’s Wonderworld is like a reductive version of all platformers.

There is so much dancing.

What Even Is The Rest Of This?

I haven’t talked about the Tower of Tims or the gems lying around, you’ll notice, and for good reason — they don’t matter. Not in the slightest. The gems are used to feed the Tims, who then propagate. The tower grows the more Tims you have. Balan Wonderworld makes a big fuss whenever a new milestone on the Tower of Tims is reached. Does it do anything? Nope. 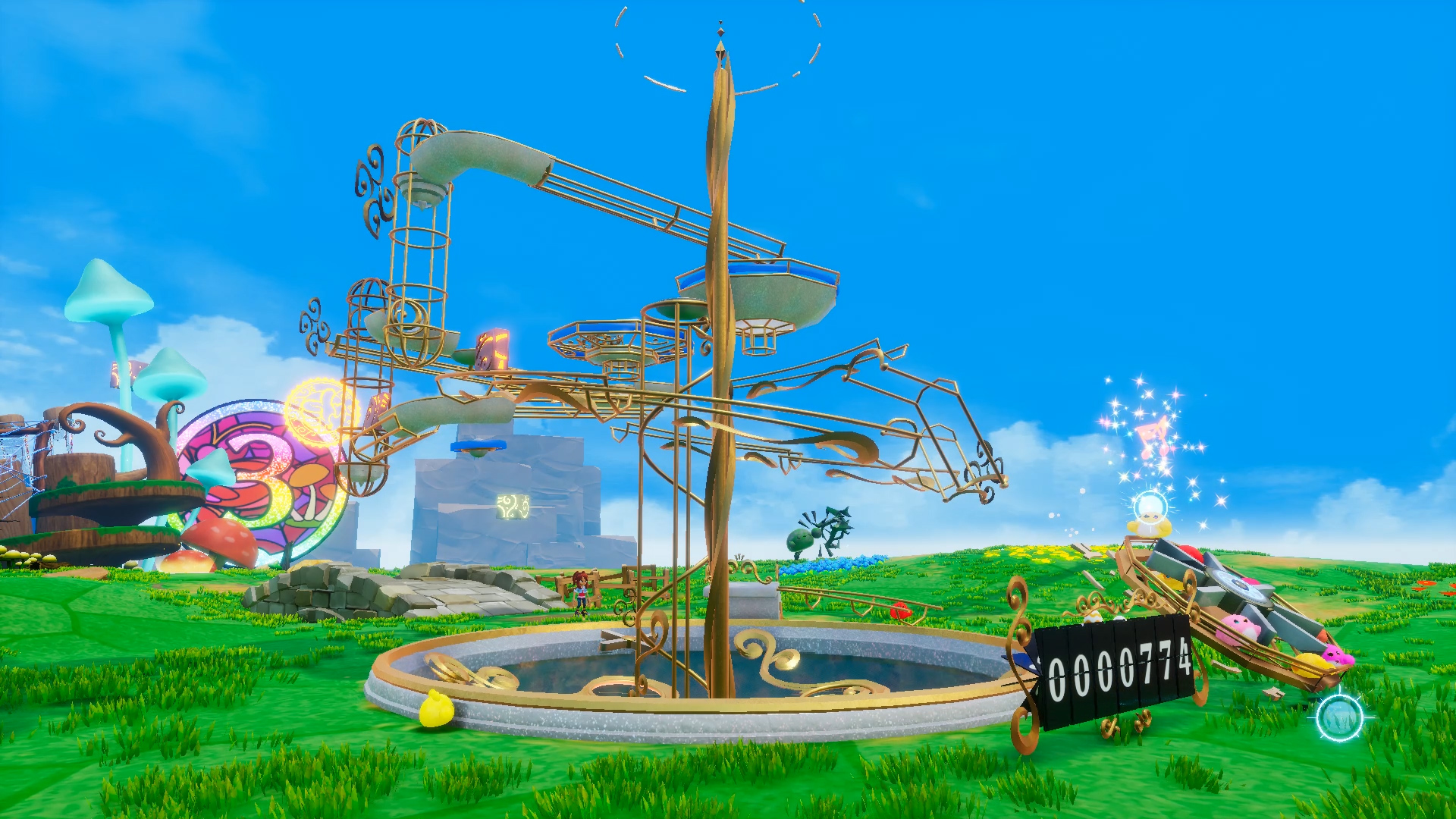 Look at this Tim Tower. What a tower. Tims love it.

Sometimes you'll play these little quicktime events where Balan fights a big boss, or breaks some barrier. You press buttons, the scene ends. As we previously discussed, the only thing that really matters for progression is Balan Statues. You can get exactly one from these events by getting all excellents. Then never do it again, because all you get otherwise is useless gems.

If the Balan Bouts were all unique they’d be more exciting, but you’re going to see the same scenes repeatedly — including this DBZ style double axe handle. Dude falls for it every time.

In some worlds you'll find these short sports mini-games. You play some rudimentary baseball, soccer, maybe some bowling, and get... Gems. Of course.

Now, look at this fucking trampoline unlocked via the Tower of Tims. Place your guesses now — what can you do with it? 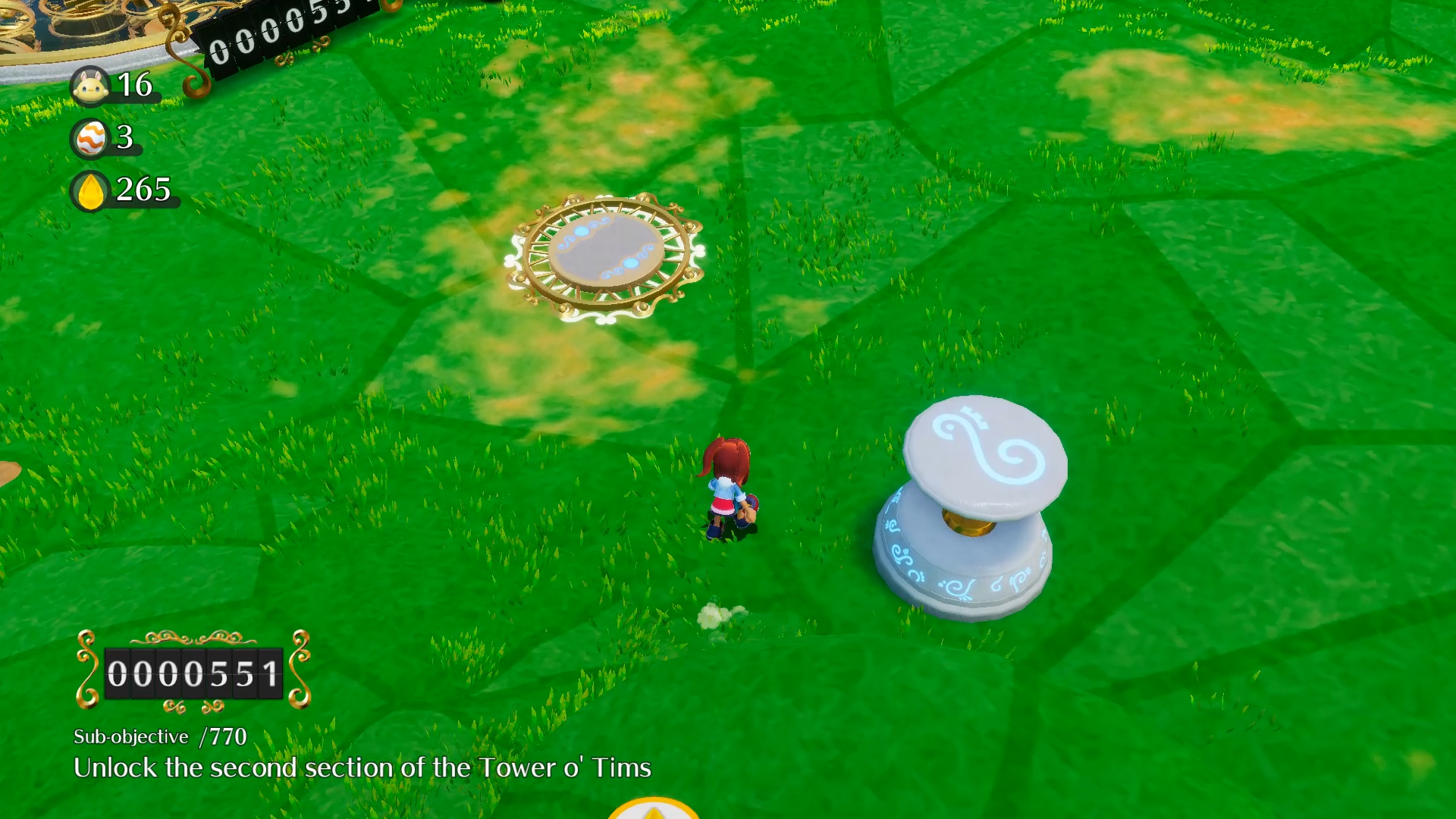 Did you guess nothing? If you guessed nothing, your are right. And I do mean... Nothing.

That's right. Can't even step on it. Thanks for the sweet reward, Balan.

After some additional research, I’ve discovered big Tims jump on it. To make the count go up. To unlock the next useless upgrade to the Tim Tower. I swear, the Tims get all the fun.

This is the best part. Watch this on loop and save yourself sixty dollars.

I’ve seen many reviews and articles make comparisons to Nights: Into Dreams, and it’s a fitting reference in all the least charitable ways. Balan Wonderworld feels like it came out in 1995 on the Sega Saturn. Like it was included as a pack-in game for all Sega Saturn SKUs between ‘96 and ‘97, and now it’s back in remastered form. It would certainly excuse many of its antiquated ideas and rudimentary decisions, which all feel right in line with the early days of 3D. 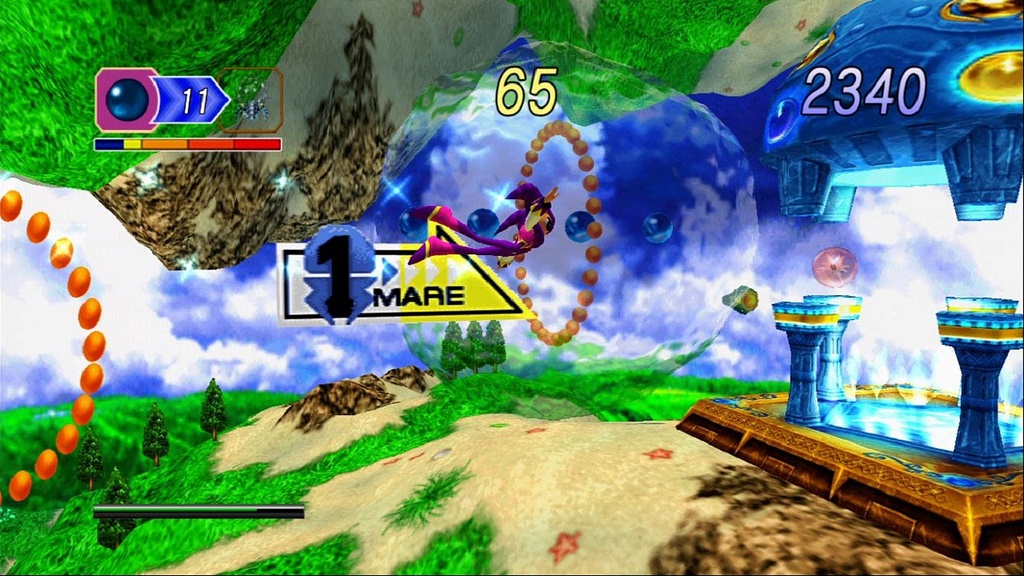 But that is not the case.

Balan Wonderworld is here now, in 2021. For the first fucking time. For sixty. U.S. Dollars. It makes no goddamn sense.

There is no reason to buy Balan Wonderworld. It is an unpleasant, trite experience with occasional glimpses of unrealized promise. The best it has to offer are vivid, lively cutscenes, but right after these are done you are dropped back into a soulless purgatory, shepherding costumes from one world to the next like Sisyphus in a fursuit.

One could certainly excuse all of this with “this is a children’s game,” but saying so is an insult to a child’s intelligence and imagination. We all deserve better. Children, you, me, and even Yuji Naka. No one man deserves this many strikes on their record. May the next product to bear Yuji Naka's name finally live up to the baffling expectations surrounding him. In the meantime, I will not be holding my breath for the announcement of Balan Wonderworld 2.

Balan Wonderworld is available everywhere for $59.99. Don't do it.