Blood! Blood! Gallons of the stuff

BloodRayne: Betrayal was unceremoniously released on Steam last month, and it seemed an opportunity to revive a certain feature here on Tilting at Pixels. BloodRayne: Betrayal is this week’s Game of Last Month. Or last solstice. Fiscal quarter, even! In fact, choose the time measurement of your choice.

BloodRayne: Betrayal is the game of your chosen time measurement.

(It can be anything except year, because the phrase “Game of the Year” carries a certain weight. While I did like BloodRayne, I’m not prepared to make such a strong commitment.)

BloodRayne: Betrayal had a previous release on Xbox Live and PSN in 2011, and I let it go by without a thought. In all honesty, I’ve never held much love for the BloodRayne series. While I’ve always been fond of the preposterous premise of a sexy vampire running around germany killing Nazis, I’ve found the actual act of playing previous games in the series a clunky, difficult mess.

So BloodRayne: Betrayal came and went, and I didn’t think much of it. Then the Steam version suddenly showed up a month ago, with no announcement or fanfare. After a few glimpses on the store page, I quickly realized Betrayal had little to do with its predecessors. The promise of hand drawn art and the low price point finally sold me on giving the game a try.

BloodRayne: Betrayal is a side-scrolling platformer with a whole slew of combat (the most recent games bearing similarity would be Klei entertainment’s Shank series). Your options on combat appear very limited at first. There’s one attack button, a dodge, a jump, a grab that allows you to suck the blood of an enemy, and a gun with limited ammo. You can perform different slashing attacks with timely pauses in between the normal combo chain, but you’ll still be pressing the attack button an unreal amount of times. 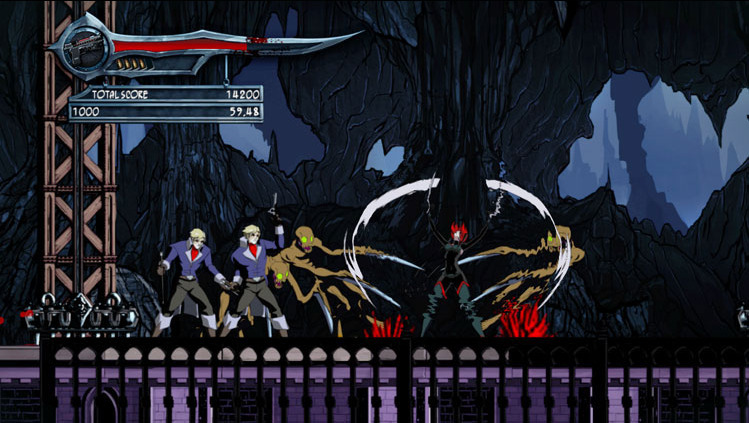 I must’ve performed this combo a thousand times.

It becomes clear very quickly that treating this game as a mindless hack and slash will get Rayne killed. Jamming on X until everything on screen is dead is not a valid strategy, as enemies at a distance will often use their own guns and projectiles to catch Rayne unaware. Success in this game is based entirely on reading everything happening on the screen, and then performing timely dodges to avoid damage.

Rayne has many unique moves, and only a few abilities are gated off from as part of the story. At the onset of the game, I actually had several other techniques at my disposal I simply hadn’t learned how to perform yet. There’s a move mapped to Y on an Xbox controller, for example, where Rayne makes some sort of fist-pumping motion. At first I thought it was a way to show my juvenile enthusiasm for the gallons of blood on screen. In reality, it’s part of an essential two-step move. When performing the grab technique, you can release an enemy from their blood-sucking fate before they die. If you perform the fist pump afterward, you’ll actually cause the enemy to explode and deal damage to everything nearby. This mechanic becomes necessary to destroying barricades later in the game, but mastering it early can help control the crowds of enemies flooding the screen. 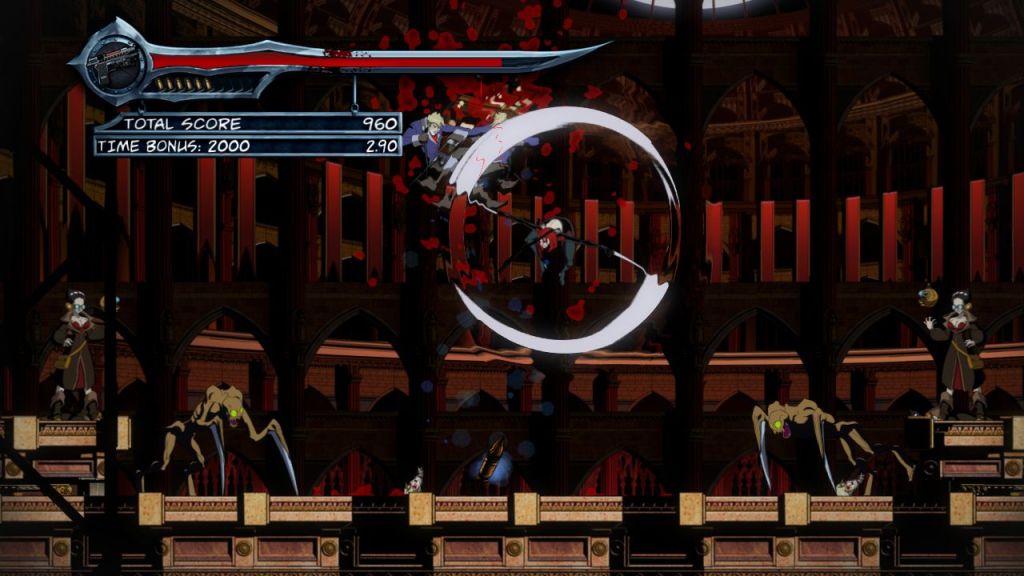 Mid-air screenshots can be difficult to capture, as it turns out.

I wish I could say I hold the same reverence for the platforming sections that I do for the artwork and combat.

That is not the case.

Platforming in Betrayal relies on a mastery of three actions. The dodge move to gain acceleration and extend the distance of a jump, a head stomp attack that will bounce rayne off an enemy, and a backflip.

These things do not act as reliably together as desired. The backflip is perhaps the most frustrating thing in the game. Sometimes instead of performing the actual backflip, Rayne will simply change directions and perform a regular jump. This is a problem because the backflip is necessary to reach higher elevations. At the start of the game, the only punishment for a lack of execution is just trying again.

There’s a section in Chapter 13 that almost brought my time with BloodRayne: Betrayal to an abrupt end. A series of saws block your progress, and precariously placed parasite bugs are the only means of navigating around them. The only way to do this is through head stomping and dashing. The penalty for failure is death by chasm. 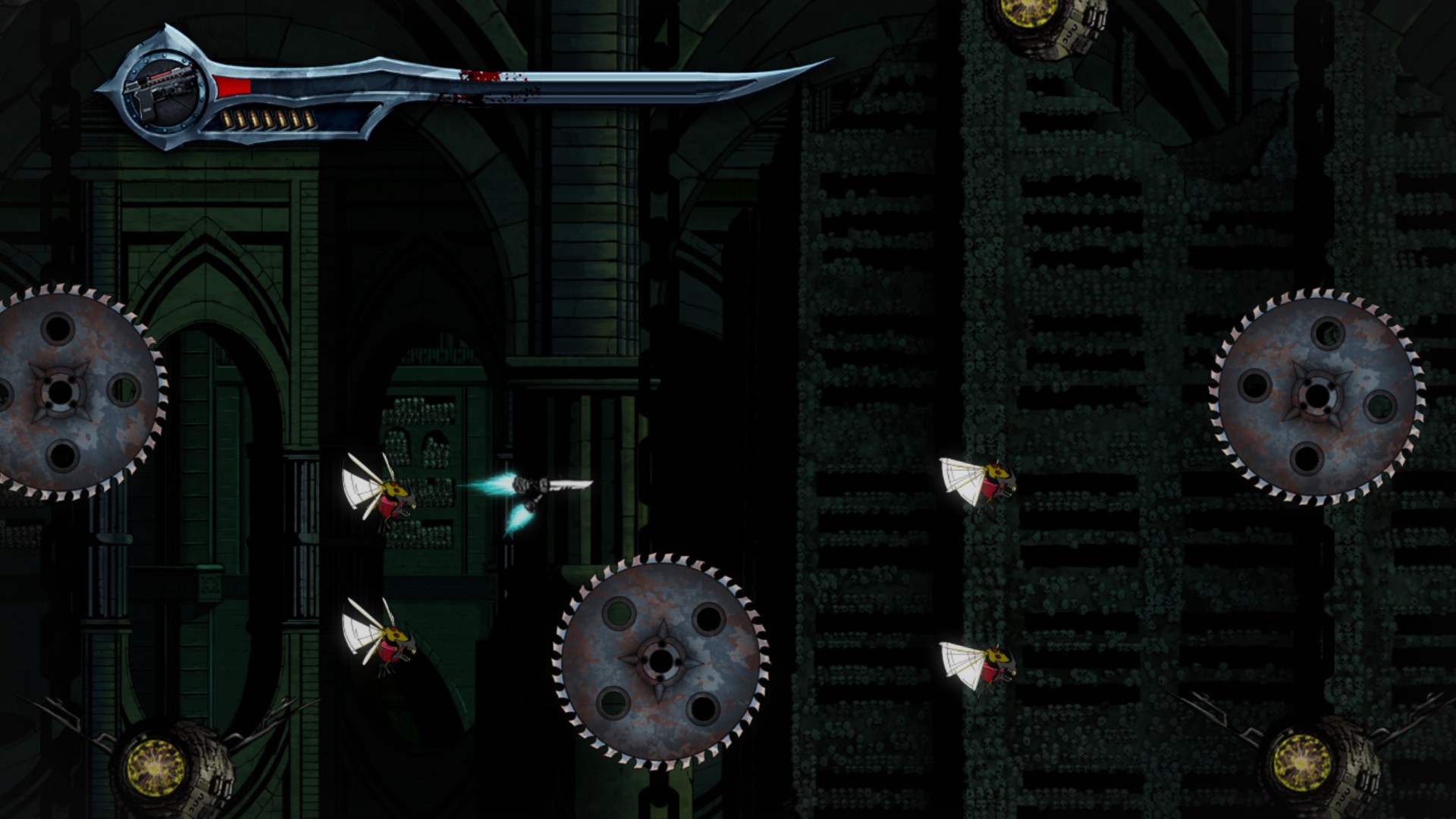 The only screen captures I could get of Chapter 13 were ones where I was already dead.

It’s worth mentioning that at this point in the game Rayne has the ability to turn into a raven and fly. Attempting this gets her zapped by an automated bird-hating statue, which drains half her health before forcing her out of her bird form.

Then she’ll fall and die.

It’s an incredibly frustrating section. Being asked to execute unreliable mechanics repeatedly with severe consequences wore on my psyche. I imagine there are many out there who never saw anything the game had to offer past Chapter 13.

That is actually a shame, because BloodRayne does continue to provide some eclectic humor and fun combat past this nightmare of a chapter. While the final sections continue to be demanding, they never ask you to grapple with the clunkier platforming mechanics in the same way. The final chapters are more apt to test combat abilities instead, and that is to the game’s benefit. 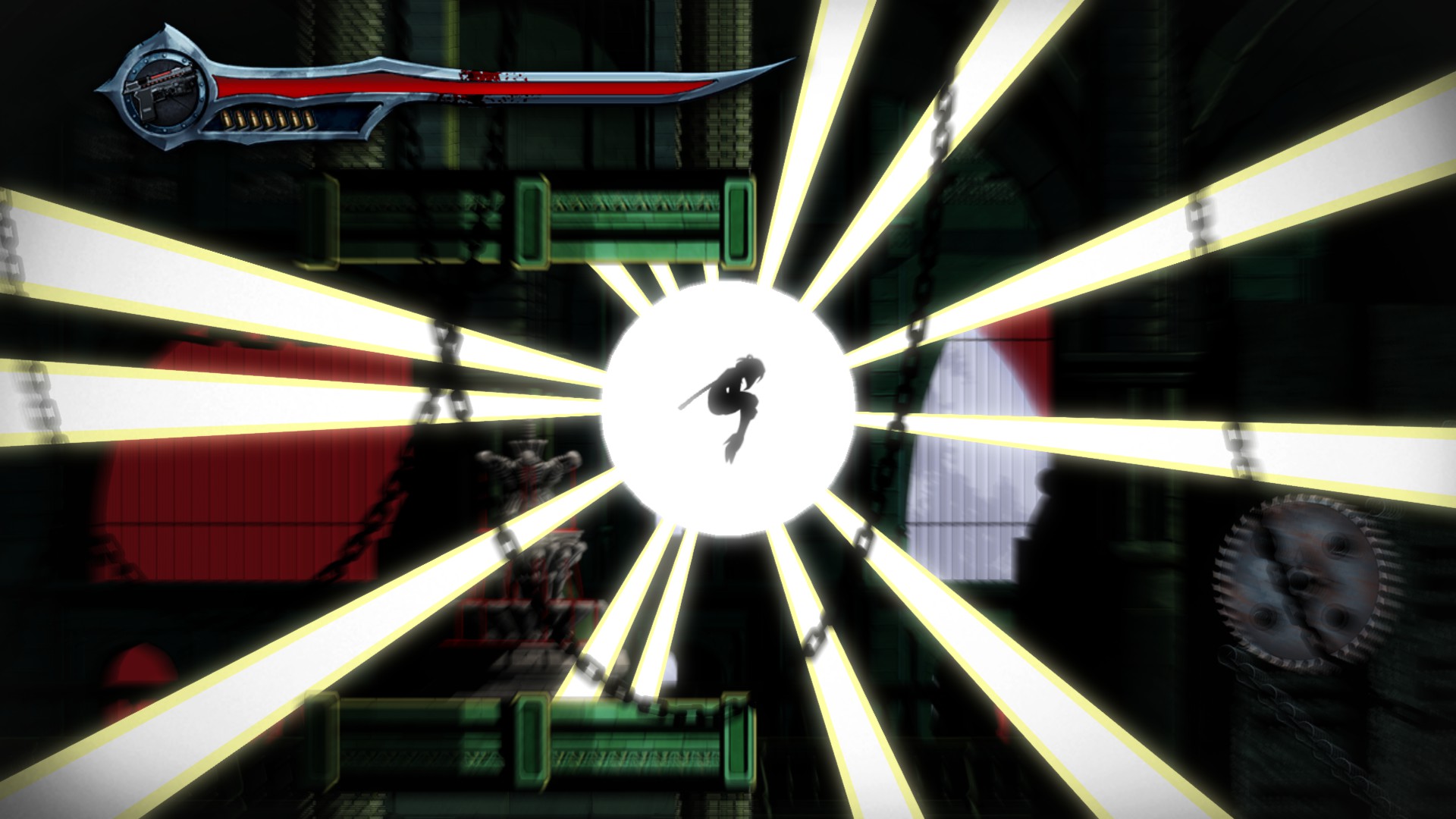 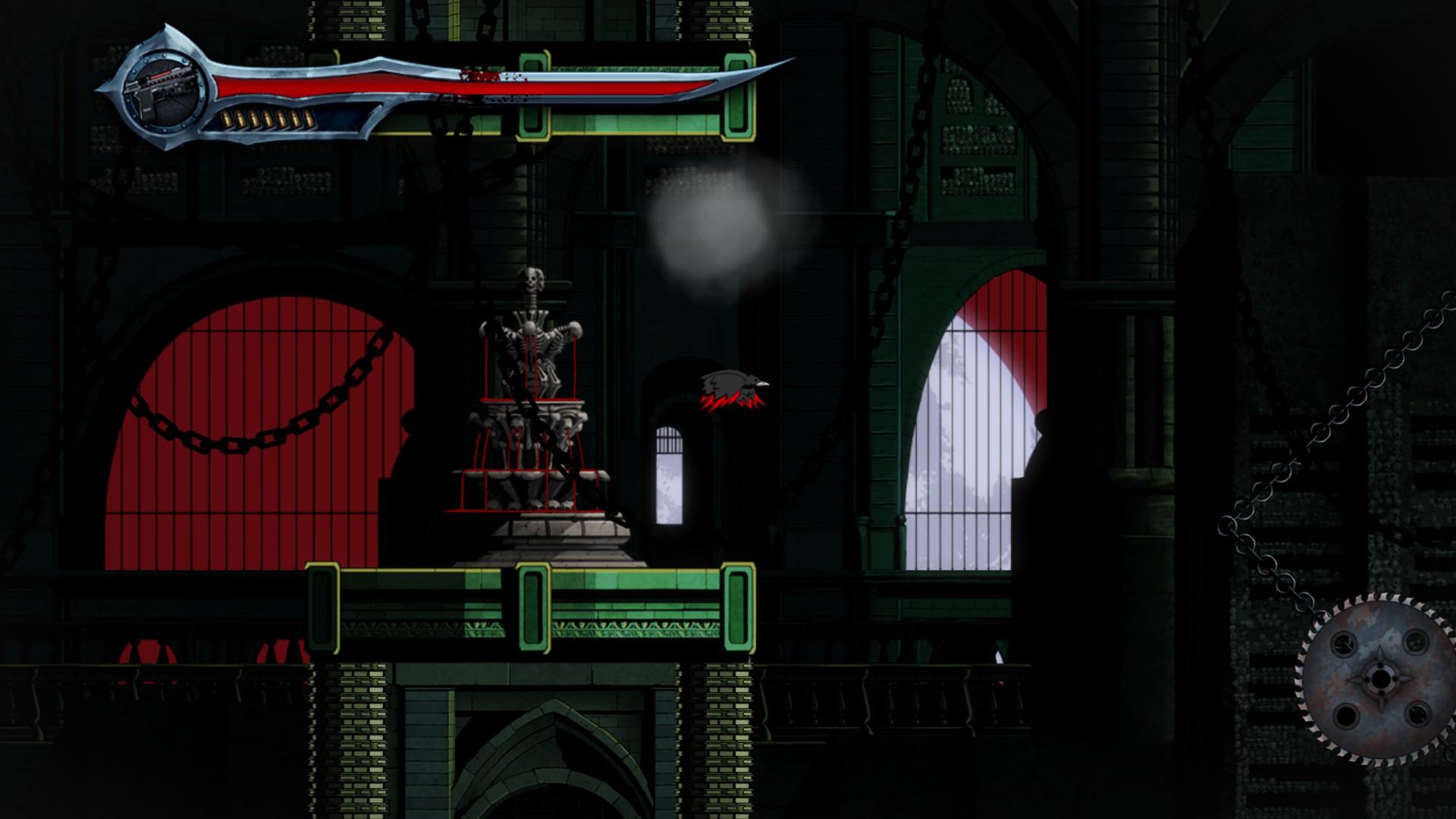 …and Rayne is a bird!

One other oddity I need to mention is the strange dissonance in the tone of the story. Early on, the game plays itself straight. The Brimstone soldiers complain about having to work with Rayne. Rayne is surprised to discover Kagan is involved in the chaos, and Kagan even delivers a traditional “we’re bad guys” speech to all his soldiers. I don’t want to spoil too much, but it’d be hard to interpret the moment Rayne receives her bird power as anything other than serious.

Then suddenly Kagan starts cracking wise in the middle of the first boss fight with him. He fires off joke after joke, and it never stops from there. At the end of the game, Rayne even makes a joke about the final boss being a load bearing boss as she runs out of a burning castle. While funny, it’s a strange and sudden break from the straight-shooting narrative that preceded it. BloodRayne might’ve been served better by dedicating to one approach or the other, instead of suddenly turning the final half into a satirical commentary on the traditional plot of a BloodRayne game. 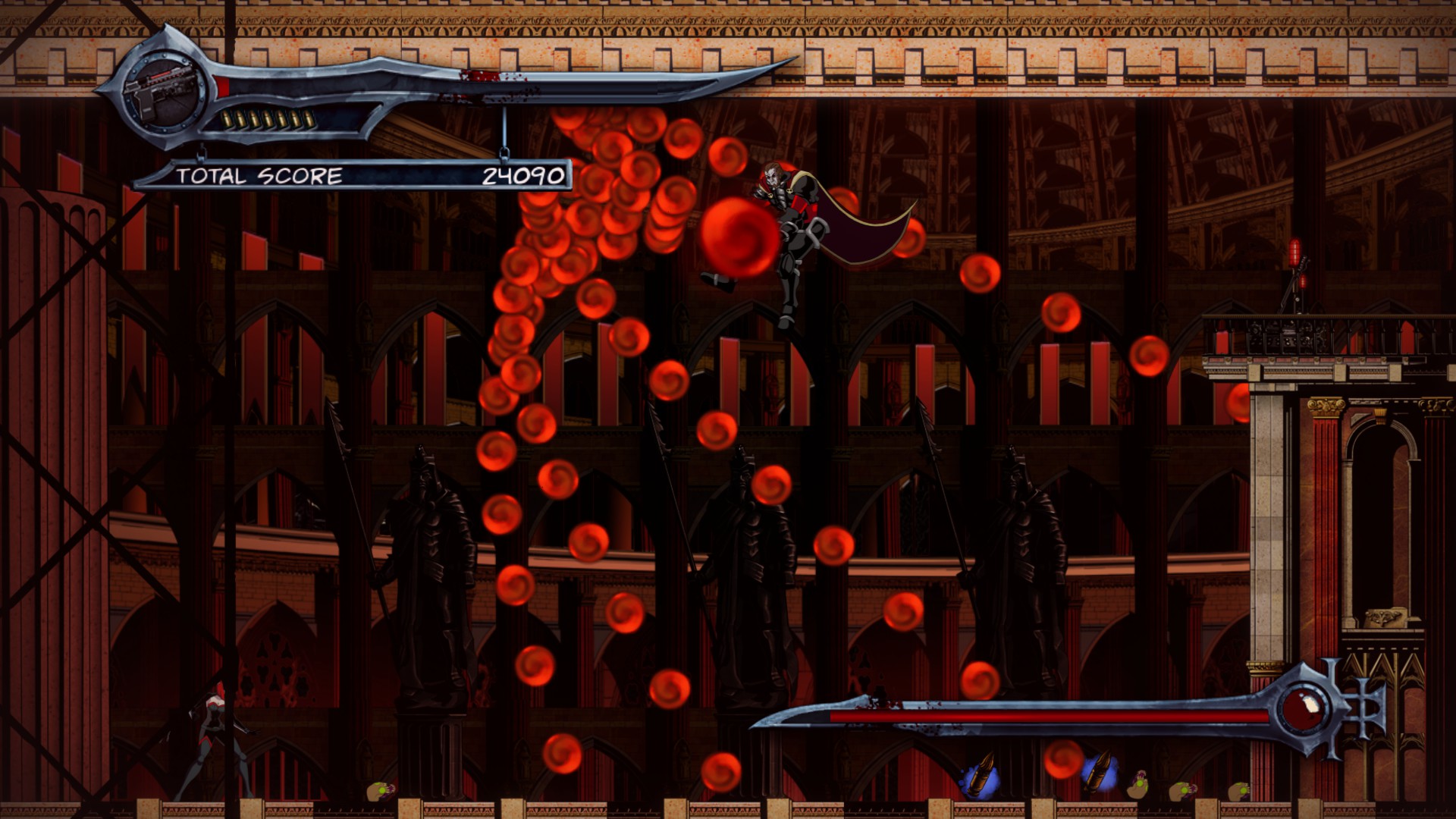 The bosses take more cues from bullet hell games then you might expect.

To be fair, there isn’t very much of a plot to criticize. The story is told through comic book style dialog boxes that pop up on the screen. Only a handful appear throughout the entire game, and it’s for this reason that I don’t judge Betrayal too harshly. The strange tonal shift didn’t have a lot preceding it to ruin. Some of those jokes, out of place as they might be, even got me to chuckle. The final boss has an attack where he powerslides across the screen and throws up the horns while a sick guitar riff plays.

Maybe I’m just an easy target, but that got me to laugh a number of times.

Whatever criticisms I levy on Betrayal, I never felt my time or money was wasted. At only $10, fun combat and the occasional chuckle was all I needed. And you know what? WayForward got me to enjoy a BloodRayne game, a feat I previously thought impossible.