When the Dynasty Warriors franchise exploded in popularity, Capcom sought to get in on the new hack-and-slash, population-culling genre. The result is Devil Kings, a rebranded, reskinned romp through Japanese history, and it’s one exhausting trek. 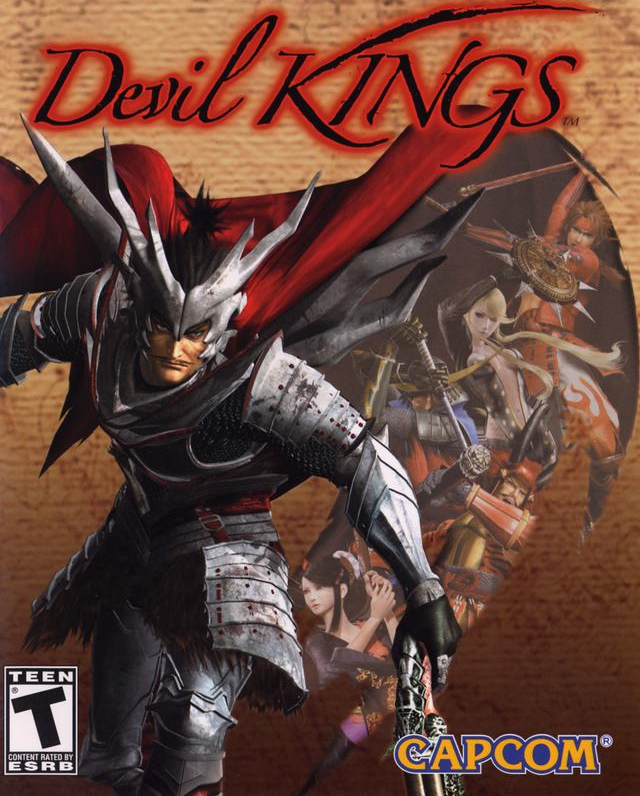 The Dynasty Warriors series has been a lucrative cash cow for Koei Tecmo, so it’s no surprise that at the peak of its popularity, other companies wanted in on that cheddar.

Capcom must’ve heard the coins landing in the coffers, because back in 2005 they also tried to get in on the newly founded population-culling genre. While Dynasty Warriors bases itself “firmly” in the warring states period of Chinese history -- and if you’re curious about the air quotes, I go into detail on that here -- Devil Kings instead casts off the shackles of reality.

Devil Kings originally went by the title Sengoku Basura in Japan and tried to follow after Dynasty Warriors by lifting names off famous commanders from Feudal Japan. When the game became Devil Kings for a North American market, Capcom eliminated any semblance of historical verisimilitude. Either that, or the greatest trick the devil ever pulled was making us forget when he dressed up like Oda Nobunaga and waged war on the world with a shotgun, cape, and a gun-toting, trigger happy wife.

Character designs are outrageous in the best ways possible. The Devil King himself runs around in full ornate plate armor and a giant red cape. He also totes a shotgun in addition to his oversized sword.

Scorpio wields two spears at once and runs with this fussy urgency, like he understands he’s got to be somewhere fast, but isn't happy about it.

Azure Dragon has a sword that splits apart to become more swords.

Hey Azure Dragon, I’m here to duel! I brought my sword and -- oh, you brought six. Cool. Thanks.

The overall roster may not be as extensive as the usual Dynasty Warriors game, but Devil Kings makes up for it with unique character designs and slightly more involved combat. As you conquer different lands in Devil Kings, characters level up, gain stats, and learn different skills to use on the battlefield. Only two skills can be equipped at once, but they go a long way towards diversifying your options (and gives you something other to do then mash the attack button). Certain attacks will cause an opponents life bar to turn yellow, marking the opponent as “primed”. Any regular attack applied after this will unleash multiple hits at once, as if they’ve been hit with Akuma’s Raging Demon super from Street Fighter. This leads to outrageous attack combos as the entire field comes alive with the sound of swishing swords.

Primed attacks quicken the pace of your dude-harvest.

The story mode also has unique style I wish more, uh, "population control" games adopted. Instead of going through a progression of battles to see a kingdom’s story, you’re instead presented with a map of the continent. The map shows the amount of land each warring faction controls. From here you’ll select which neighboring leader to invade. Victory means you’ll adopt the territory into your own homeland. As for defeat... we’ll touch on losses in the next section.

After each turn, the other leaders will wage campaigns against each other, too.

Sometimes you’ll even have to defend your own homeland from invaders between turns, or be treated to some nonsensical anime cutscene. The map is a great way to provide a global context to each match. I also appreciate having the option to avoid annoying combatants like Frost, and just hope someone else conquers him first.

Lastly, levels themselves are appropriately sized. One of my biggest issues with Dynasty Warriors has always been the outrageously large maps and long levels, which leads to an awful lot of unnecessary running. the latest iterations provide a “call horse” button, but now you’re just riding across an unnecessarily large map instead. Later Dynasty Warriors missions, especially in the older games, can take upwards of an hour to 90(!) minutes to complete.

In Devil Kings, even the longest stages last half an hour at the most. Horses are present in some levels, but aren't necessary. There’s only one event I can recall where a horse is mandatory, where you're required to chase after Azure Dragon down a mountain path.

The smaller map sizes make the game much more approachable and less of a time commitment.

Capcom decided the biggest problem with Dynasty Warriors was a lack of difficulty. They decided to fix this by making Devil Kings harder for its North American audience, but there’s a fine line between difficult and frustrating. Make no mistake, I like my games to have a little bite. Devil May Cry 3 would make a top 10 list of all time favorites because of its amazing balance between risk and reward. Devil Kings nailed the risk, but forgot to include reward. For example, you are always at risk of being pummeled by a million arrows from archers out of your view, and you are rewarded with instant death.

In order to save in Devil Kings, you must successfully complete a stage. It took me four attempts to start a save file. No matter what character I chose, it seemed I was no match for the enemy generals. Every time I’d reach the final commander, I’d pile on the damage, land hundreds upon thousands of hits, and barely notice a scratch on their life bar for my efforts.

Then I’d be murdered in three blows.

There is an easy difficulty option available which might alleviate this problem, but I’ve resisted admitting defeat. (There’s also a hard difficulty, which seems totally unnecessary.) Defeat means Game Over, any progress in a stage gone in a flash.

Now, with that in mind, let us return to the "Conquest Map" I praised earlier.

When I first failed a battle, I mistakenly assumed I would lose ground in my homeland, not be returned to the title screen. Perhaps my optimism is to blame, but it seems like a missed opportunity to make the conquest screen serve only as a glorified stage select screen. From its presentation, it seemed a logical conclusion to draw is the enemy commanders must work their way through your territory one space at time, with all your previous victories acting as a buffer. The only way to suffer a game over would be to lose all your zones, then suffer a defeat on your last remaining dot.

See all those dots? Those are places I’ve conquered. You’d be surprised how little it matters.

The reality -- a defeat when you control one space and a defeat when you control all but one space is equivocally the same. Leveling your chosen commmander up is essential to surviving later stages, so it's extremely frustrating to be denied even a fraction of the accumulated experience upon defeat, not to mention lose your last twenty minutes of progress and treasures in the process.

Accumulating treasure and leveling up is so necessary to your progress that it’s devestating to lose it all upon death.

The ultimate problem with Devil Kings, the problem which takes it to the top of "I cannot recommend this" hill, is a startling lack of variety. Characters say the same things over and over, every battlefield progresses the same, and every character faces identical challenges with identical approaches. There are sixteen characters in total -- some of which must be unlocked first by completing the game as other leaders -- and all sixteen of these leaders will encounter identical challenges. Every kingdom will chase Azure Dragon on a horse, defend against Red Minotaur’s cavalry division, and deal with Frost being Frost. While I enjoyed the game for the first few hours -- even excluding the sudden archer deaths -- my enjoyment quickly waned long before the expected sixteen runs through an unchanging conquest mode to finish the game as each character.

I have seen this cutscene five times in two hours.

Despite how conceptually clever the conquest map is, this is one area where Dynasty Warriors has excelled better, especially as the years have gone on. Yes, most battles play out the same in the Dynasty Warriors series too, but choosing a character in a different empire often results in a few unique battles per playthrough, or a handful of unique cutscenes.

Recent Dynasty Warriors games even have a mode similar to Devil Kings only mode, which mimics the concept of roleplaying a warlord vying for power in a war-torn country far more efficiently.

Devil Kings, meanwhile, offers no variation or alternate modes at all.

It does offer the chance to chase Azure Dragon every few hours, though.

No multiplayer! Even games with rough design choices can be made better with company, but not here.

To be fair, Dynasty Warriors 2 did not contain multiplayer either.

Devil Kings remains semi-competent in mimicking the usual crowd-fighting experience Dynasty Warriors continues to monopolize. The varied mechanics, clever character designs, smaller levels, and conquest map make for a decent experience on your first play. In taking a chance on Devil Kings, in fact, I discovered a number of mechanics that if Koei copied back in 2005, I would’ve been more inclined to keep up with the Dynasty Warriors series (notably the unlockable skills, primed attacks, and uh, the idea of the conquest map. Certainly not the execution).

Yes, all those things are great, but It’s also not hard to see why Devil Kings didn’t catch on. The crippling lack of variety means you’ll see every possible stage after playing only three characters, and the game anticipates you’ll want to do this thirteen more times. Couple this with sudden archer death and the subsequent loss of progress, and honestly, letting the Devil King have a shot at running the world doesn’t seem so bad -- especially in 2016.

There are worse ways the world could end, so hey, why not conquest by Devil King?

Despite the obvious intention to create a challenger for a niche corner of the market at the time, Devil Kings didn’t distinguish itself enough to find solid footing. You could probably have guessed this, since you’re reading about Devil Kings on some dark corner of the internet. In fact, since its release, this is probably the most coverage Devil Kings has received.

I hate to say it, but that’s probably for the best.

There are ideas here I think outshine the rote button mashing in Dynasty Warriors, but the lousy execution, the lack of content and variation, and absurd amount of grinding expected make the whole thing fall apart.

If you’re a fan of the Dynasty Warrior series and you’d like a little view into a world where Dynasty Warrior games were made with more outrageous character designs and a stronger focus on unique objectives during a level, you might be the only person I'd still recommend Devil Kings to -- as long as you can find it for the price of a McDonald’s Big Mac. For everyone else, it’s not worth your time or money, and is best left buried in the history it so poorly tried to represent.

As an ancient relic which reveals something about the time period in which it was made, Devil Kings serves quite well. As a game you play for enjoyment, maybe not so much.

Why wasn’t I in a better gaaaaaame!?