Judging from Shadow of Mordor’s critical reception, you probably don’t need me to tell you it’s exceptional. The Nemesis system is one of the coolest, most organic things I’ve experienced in a game. The captains and warchiefs of Sauron’s army populate the world, responding to your actions and remembering their past encounters with you. They have their own fears and hatreds. When left to their own devices, they battle amongst one another and clash for authority in the army. Graug and Caragor roam the world. Everything feels alive, and everything hates you.

In a way I could never predict, this got me pondering over Dynasty Warriors and The Romance of The Three Kingdoms.

When Dynasty Warriors 2 launched — the first in the series to feature the battlefield murder simulation we all know — I don’t think anyone could’ve predicted the series would continue to release installment after installment for a decade. Ten years later the series powers on, with multiple spin-offs in addition to its already obscene number of iterations. Perhaps once it resembled a steam locomotive; now it’s a bullet train made of money. 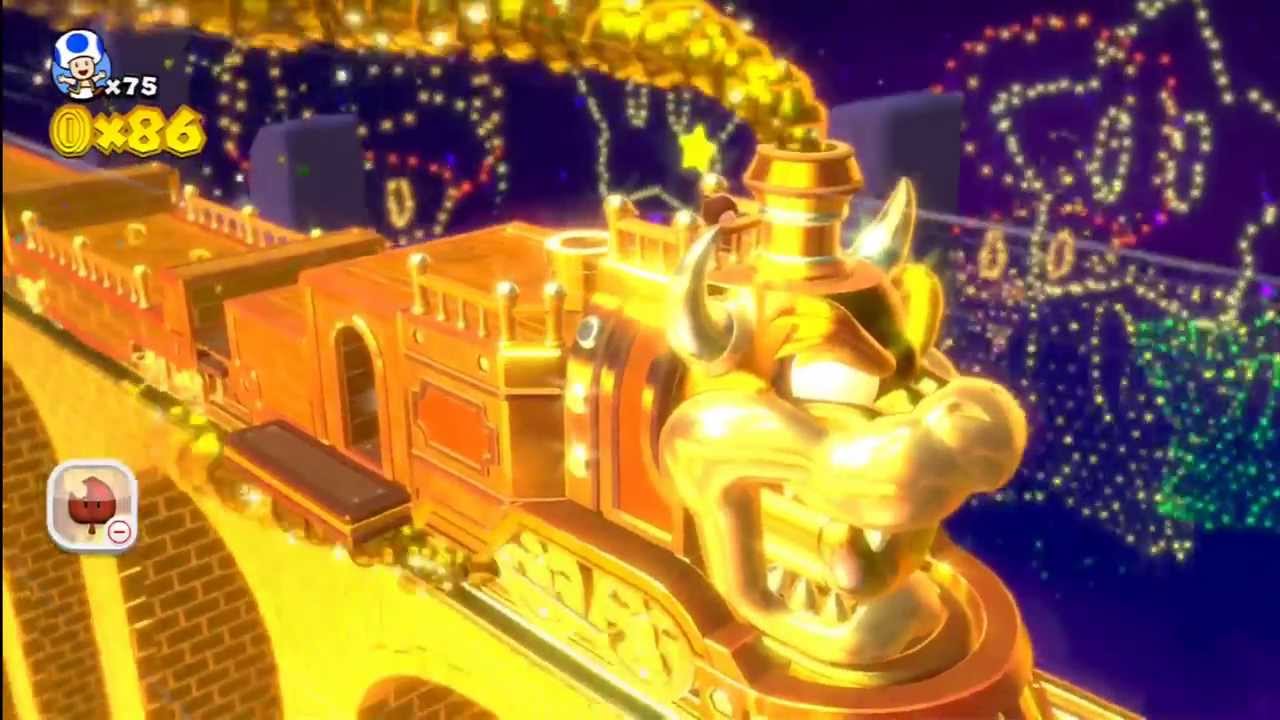 Like this, only made of dollar bills and ambiguous historical accuracy.

There’s a major problem inherent with the entire series, however — one that has bothered me for a very long time. It has to do with the source material. Romance of The Three Kingdoms by Luo Guanzhong is iconic not for its major battles and the massive reaping of dudes, but the drama between the officers. People betray one another. Friends once separated are united once more, and often shed very manly tears while in the throes of compassion. The strategists battle one another on a different level than the other officers, as they try to constantly deceive one another with ruse after ruse. Even during allied operations, the masters of strategy try to plot one another’s executions, as they see the threat posed for future conflicts when the nebulous alliance breaks. 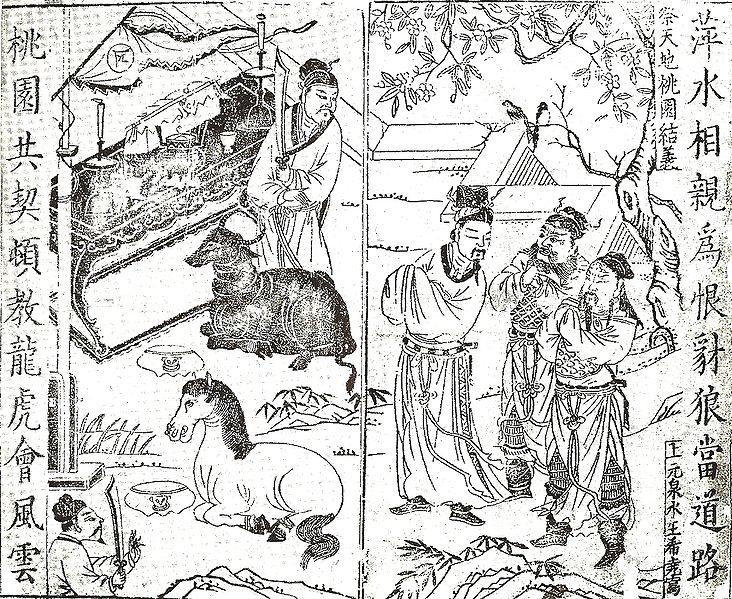 This is the closest thing people had in 1300 AD to Game of Thrones.

Here’s one of the major problems inherent to the Dynasty Warriors series, however: it’s focused on the least interesting aspect of The Three Kingdoms. It’s a little like watching Apocalypse Now and fast-forwarding through the dialogue. The series hasn’t completely ignored the inherent relationships and iconic scenes, but it does instead relegate these moments to absurd cutscenes with equally absurd voice-overs instead of making them an integral part of the game’s design. The series would be better served, I think, if Koei Tecmo created an organic, ever-changing A.I. system to make the relationships the focus of the battlefield.

Shadow of Mordor. Dynasty Warriors. Nemesis system. See where I’m goin’ with this?

Real talk for a second, Dynasty Warriors fans. Dynasty Warriors bases itself in the murky, swamp-muck shores of history. I love Luo Guanzhong’s Romance of The Three Kingdoms, but it’s only slightly more historically accurate then Columbia’s version of the United States in Bioshock Infinite. While the novel does use historical figures, it vastly fictionalizes the events leading to China’s reunification under the Jin Dynasty. Chinese historian Zhang Xuecheng wrote, “Romance of The Three Kingdoms is 70% fact and 30% fiction.” After two readings, I must confess I find his ratio conservative at best. I think you’d be hard pressed to find empirical evidence proving Lu Meng was murdered by the vengeful spirit of Guan Yu.

By no means am I suggesting Koei Tecmo lose the iconic battles from Romance; the allied assault on Cao Cao’s naval force is too awesome to suggest abandoning. What I’m suggesting is to abandon the need to stick to the source material for everything. In many ways, they already abandon history when it becomes inconvenient for the player. The final battles for each dynasty often transpire in favor of the player’s kingdom, regardless of what kingdom actually emerged victorious. 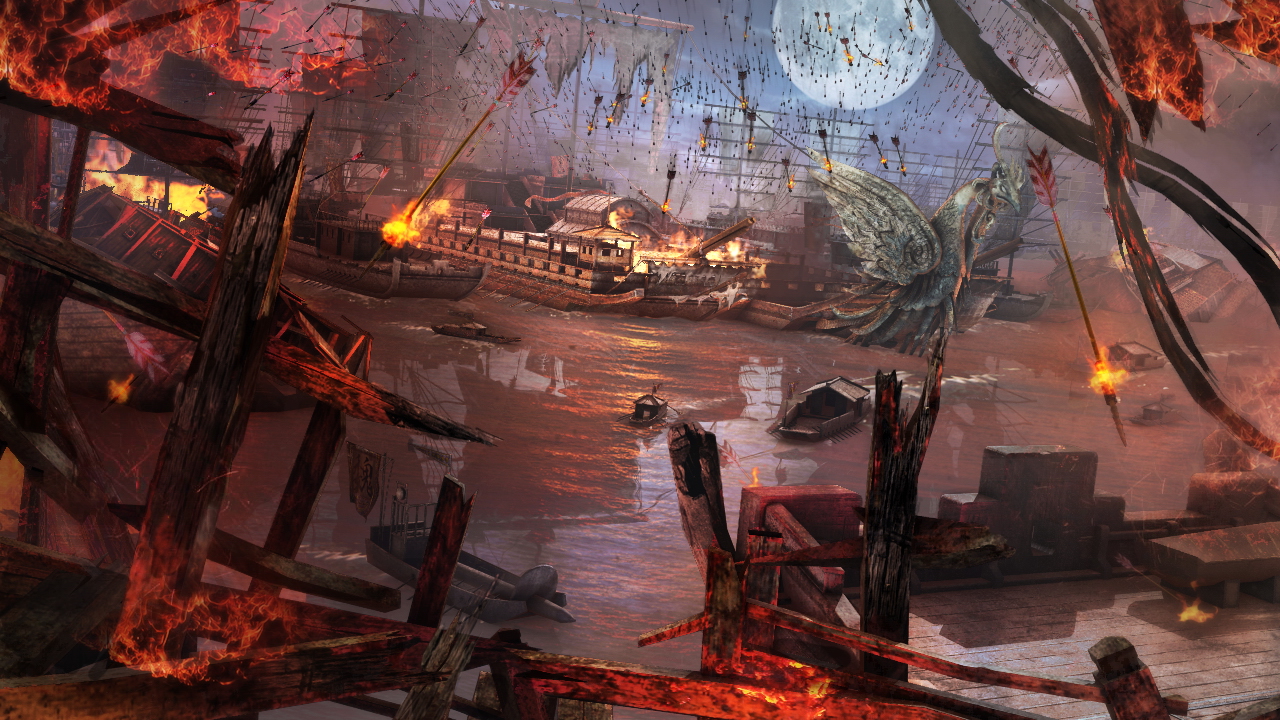 It just wouldn’t be Dynasty Warriors without boats being on fire.

Instead of trying to follow the narrative at all, why not just use the names and figures to set the world, but make no means to force its direction? Using the battles as inspiration instead of a playbook would allow for surprises, improvisation, and a more organic world overall. If the A.I. kingdoms lose and gain territory on their own without the player’s involvement, maybe that naval alliance can happen between different kingdoms. Maybe the player’s kingdom ends up as the one defending a battle on two fronts!

People love their Dynasty Warriors characters. From Xiahou Dun eating his own eye on the battlefield as an intimidation tactic to Lu Bu and the inadvisable pursuing thereof, there are a number of scenes fans expect to occur to all these people.

If we remove the framework, we can make these things happen to any officer. Every playthrough could result in a different set of events, events which permanently sculpt the many officers encountered. 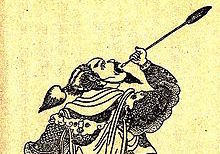 Now any officer can eat their own eyeball!

Any hero could become a legend on the battlefield. Just like how the Uruk-hai and Orcs gain power, the leaders on a battlefield could become stronger after certain encounters. This allows any NPC soldier to become a threat, and not just the ever predictable Lu Bu that you Must Never Pursue. 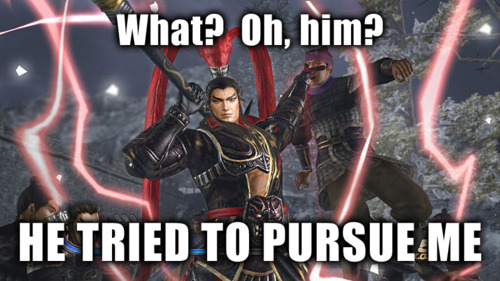 One alteration that needs to be made from the Nemesis system in Shadow of Mordor is the frequency of death. It’s very easy to kill Uruk-hai and Orcs. They’re mindless killing machines with just enough personality for the player to appreciate, but not enough to make the player pause before turning them into Caragor feed.

In Romance Of The Three Kingdoms, generals frequently try to sway skilled soldiers to their side. Execution of an opposing force’s general is often a last resort, when the officer has made it clear where his allegiances lie.

There need to be more options for the officers in Dynasty Warriors. For one, the player will have friendly officers on their team from the onset, instead of having to brainwash them. Maybe one officer has “pride,” as a quality. If the player comes to their aid when in trouble, they actually get upset at you. They had it under control, damn it (even if its clear they didn’t), and it’s an insult that you’d try to help!

On the flip side, maybe they appreciate the help, which causes a few points to increase on a relationship meter and loyalty ranking. Later the game, when the player ends up in trouble, this officer returns the favor and comes to your aid in a time of need.

Instead of killing enemy officers, the player can capture them and escort them back to strongholds! They can be exchanged to free another captive officer from an enemy kingdom. Or perhaps they can be repeatedly caught and released, and eventually bribed to the player’s side if their loyalty to another empire has wavered enough.

Likewise, there can be a risk that the officers on the players side could go turncoat. Maybe they open the gates for the enemy army and suddenly switch allegiances. And, of course, the player can use the same tactic on the enemy, using one of those bribed soldiers previously mentioned. 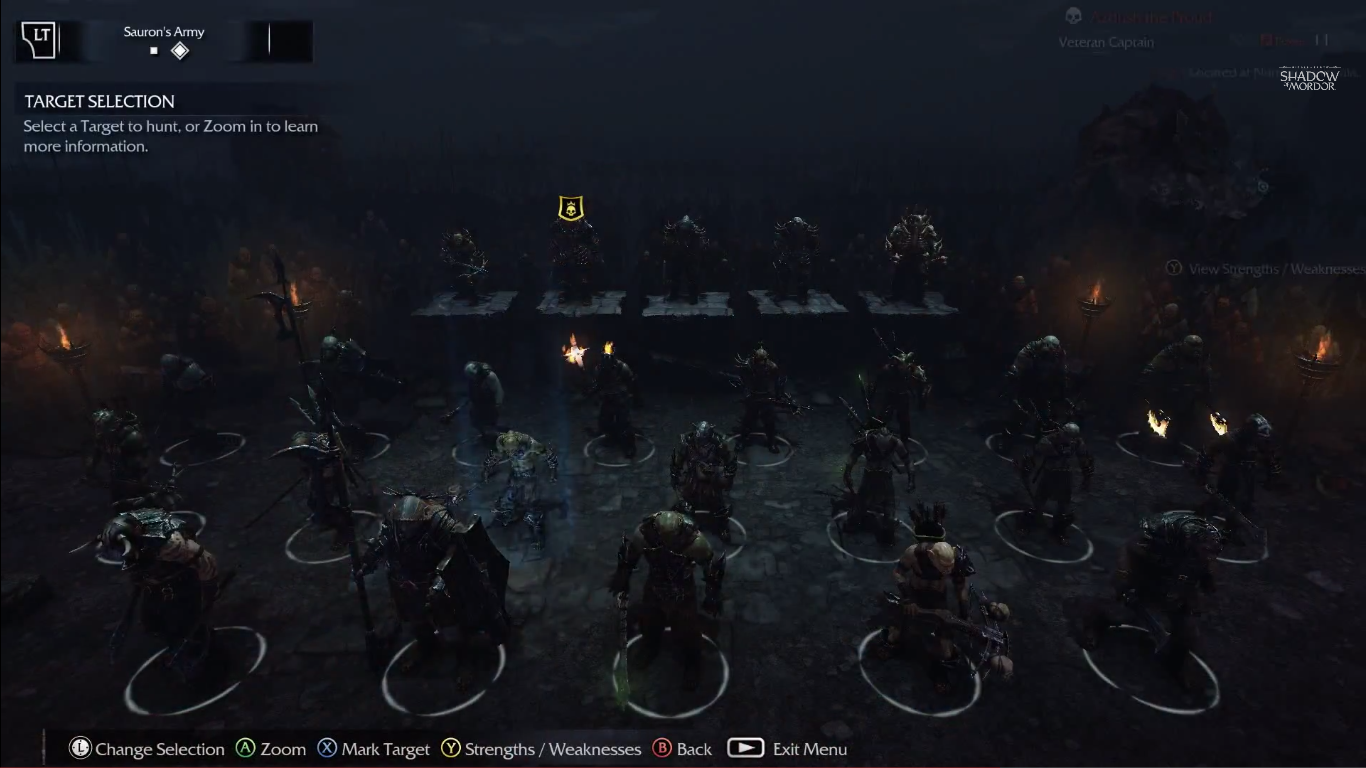 Dynasty Warriors’ officers need to die with less frequency than these Orcs do.

At some point these soldiers need to die, of course, but when they do it should feel catastrophic. Game changing. Even when an opposing force’s general is killed, it ought to feel like a friend’s been eliminated.

If there’s one thing I’d like to see end in Dynasty Warriors, it’s the oversized maps. Instead of having maps filled with narrow corridors and impassable walls, why not put all that space to use?

The player could start in their home region, where the first objective is to expand your kingdom’s territory. What direction the player chooses to pursue this objective in will determine their primary enemy, and what further regions open up. Maybe the player travels north and encounters Meng Huo and his tribe first. Maybe they travel inward and clash with one of the other primary kingdoms. Either way, until the player can secure the path to these regions, they aren’t permitted to travel into the area. This makes strongholds and roads essential to hold, as they allow the player to move into a new region.

An open map like this would better support the large-scale battles Dynasty Warriors games try to create, but would do it in a more organic way.

Now the whole game is focused on unifying the country, and the player can see the impact of their actions at every turn. Every stronghold taken is a step closer, and every city lost a step back. The later sections of the game would become harder just because of the numerous angles of attack the rival kingdoms have. 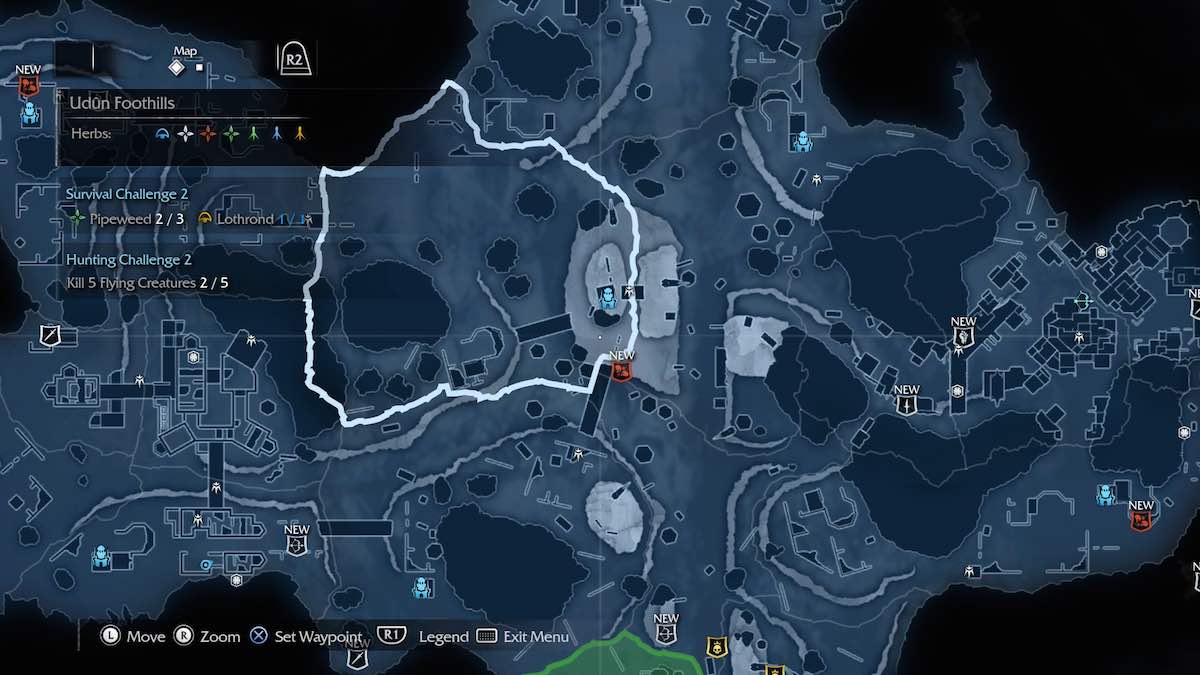 Like this, but with controlled territories, forts, and elephants.

But we named this site after a saying attributed to Don Quixote for a reason. We like to dream big.

Here’s to hoping Koei Tecmo does too.