I believe these to be the ten best games of the year two thousand and fourteen. 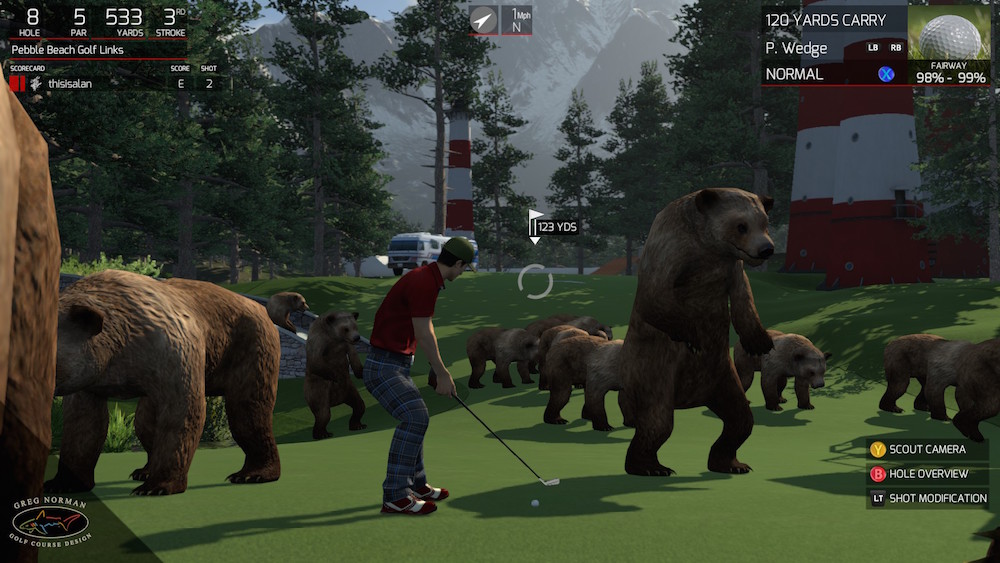 You know how most golf video games are packed full of equipment upgrades, character progression paths, and power-ups? The basic premise behind these inclusions often seems to be that the game of golf itself isn’t interesting enough, so to make a video game work, you need to include a variety of additional mechanics.

Well, I’m here to tell you that if you really like the game of golf (and I do), then you will be much happier with The Golf Club than with any of those other games. The Golf Club focuses on golf, pure and simple. It eschews standard golf game trappings and instead devotes its attention to a kick-ass course editor, satisfying physics model, and dead-simple multiplayer model. The result is a tremendously compelling golf game that is very much worth checking out.

Please ignore the bears in the above screenshot. 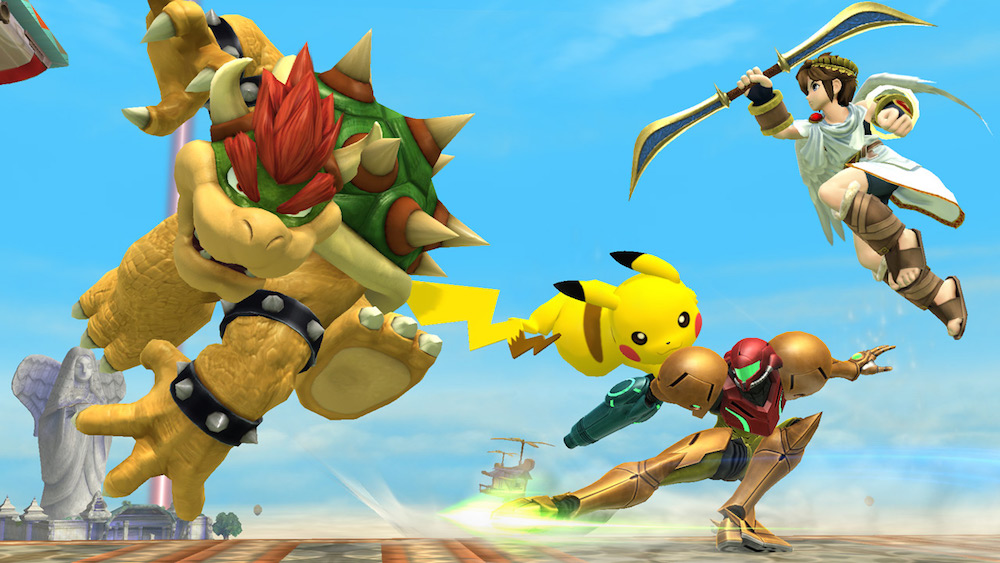 I feel similarly about the new Super Smash Bros. as I do about Mario Kart 8 — Nintendo managed to give us more, better, newer Super Smash Bros., and that’s exactly what we were looking for.

The stages look gorgeous, the character selection is unbelievably vast, and the gameplay follows directly along the tried-and-true mainstays of the series. There’s also the impressive variety of modes, both online and offline, along with support for nearly any control scheme you can imagine. It feels as if Nintendo has crafted the definitive edition of Smash.

8. World of Warcraft: Warlords of Draenor 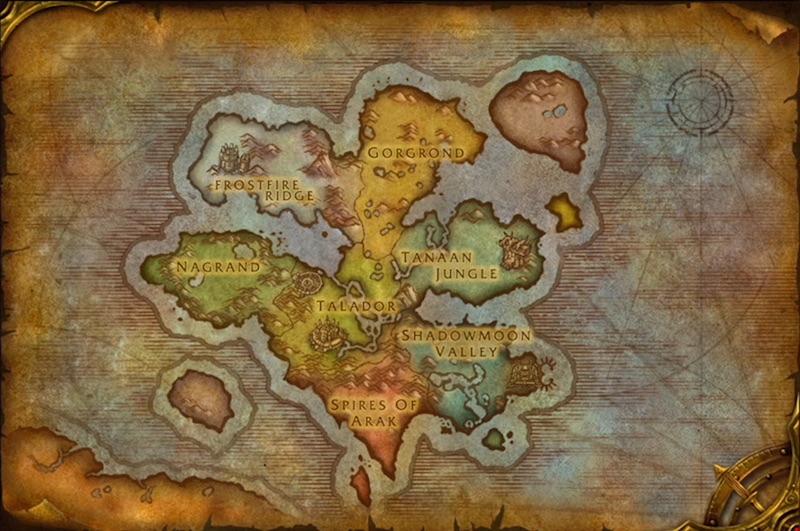 As a longtime World of Warcraft fan, this one may seem like a shoe-in. However, the last few WoW expansions haven’t really managed to hook me for very long. Warlords of Draenor, however, has been different.

For the most part, this difference hasn’t come from the actual content of the expansion itself. Rather, it has come from the fact that more of my friends than ever are back playing World of Warcraft after years away from it. This critical mass of friends is essential to my engagement with WoW, so Warlords of Draenor is clearly doing something right. 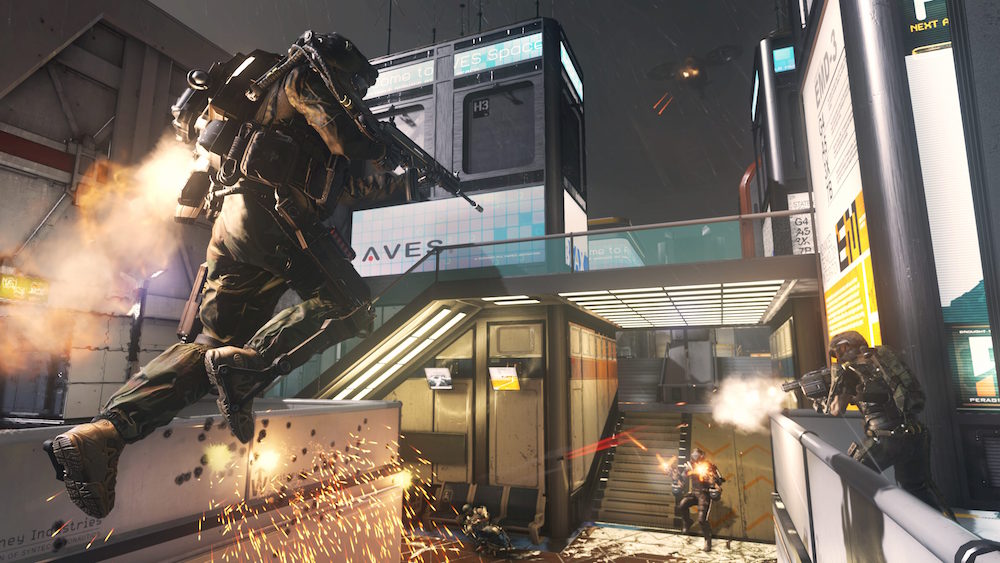 Who would’ve thought that a Call of Duty game would make my top ten? Yes, the franchise continues to march on with its fairly predictable tropes, but this year a new developer, Sledgehammer Games, took their own pass at it with Advanced Warfare.

Turns out that pass is pretty damn good. As usual, I didn’t spend a ton of time in the single-player campaign, but what of it I saw was visually impressive. On the multiplayer side, however, I’ve thoroughly enjoyed my time with Sledgehammer’s faster, more agile character movement rules. Especially when the game was first released (before anyone knew what was going on), it was delightful to use the new rocket-propelled dodge mechanics to outmaneuver other players. 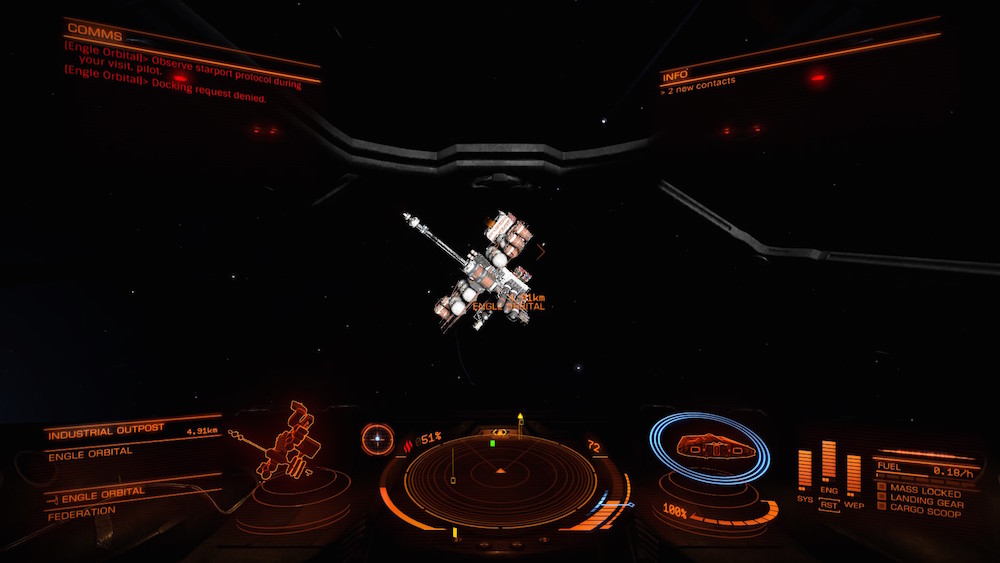 Many games have tried to convey the feeling of piloting a spaceship, freely roaming about the galaxy, exploring, trading, and engaging in ship-to-ship combat. To date, no game that I’m aware of has done as thorough and convincing a job of conveying this feeling than Elite: Dangerous.

When you play Elite: Dangerous, particularly if you play it using a HOTAS (hands on throttle and stick) setup, you are in space. Everything from the visual design of your cockpit to the travel mechanics between star systems contributes to an all-encompassing experience that will effortlessly hold your attention for hours on end. 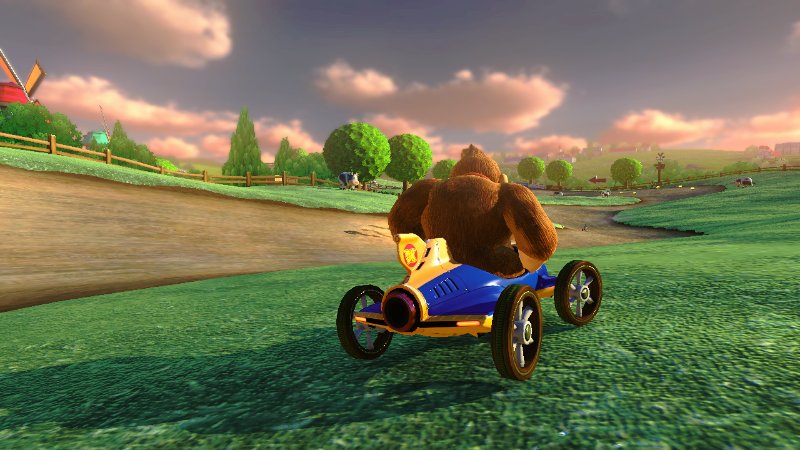 I wanted more, better, newer Mario Kart and Nintendo gave me exactly that. Mario Kart 8 is a near-perfect evolution of the Mario Kart game into a new console generation. The visuals are stunning, the courses range from fun to outrageously thrilling, and the soundtrack is catchy as all hell. 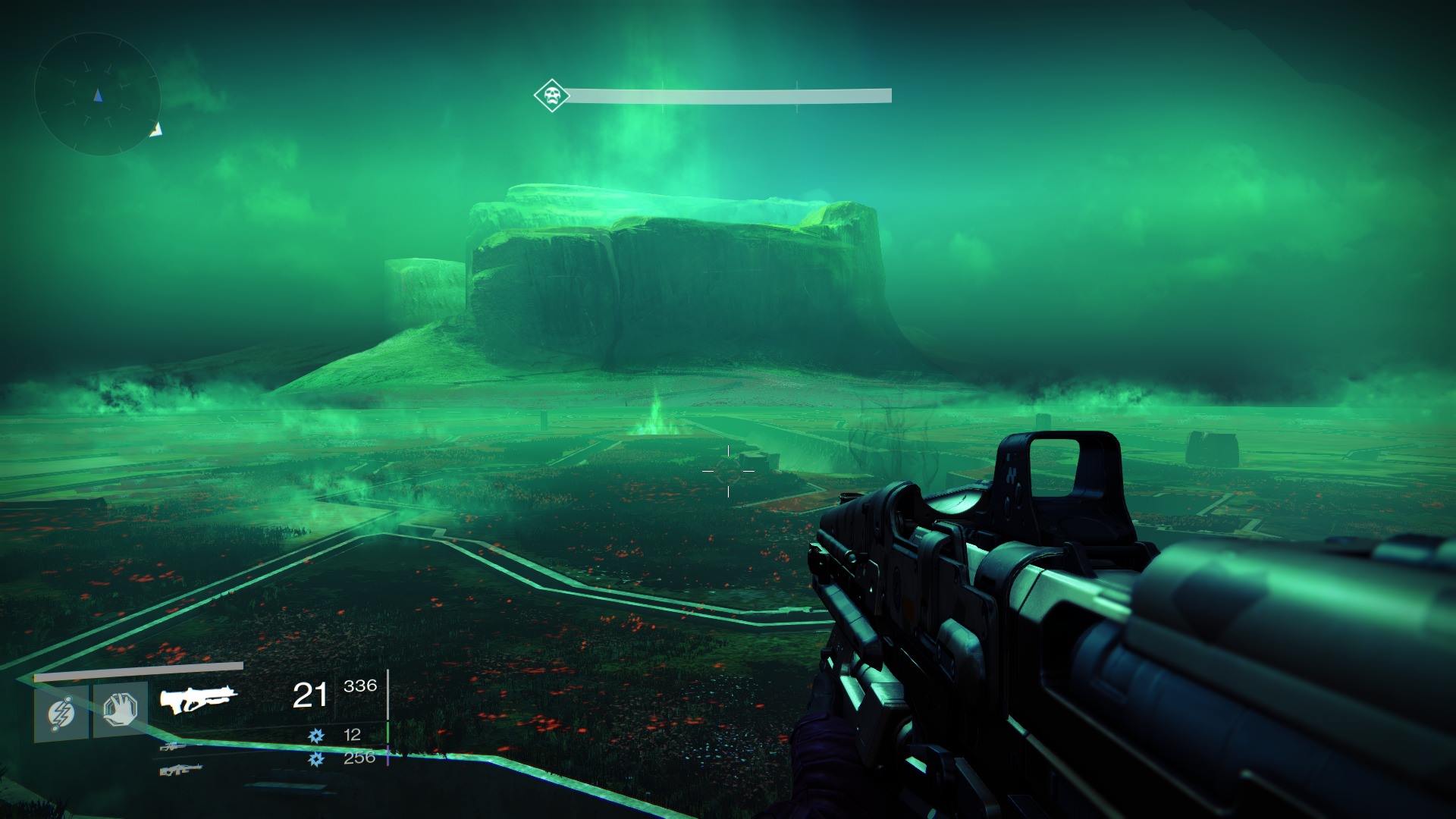 I had a ton of fun with Destiny this year. I also clearly recognize the many flaws in Destiny, but I’ve learned to accept them because the game itself is damn fun to play. Everything feels and looks great, from the satisfying, yellow-number explosions that emanate from enemies’ weak points, to the satisfying thrill of discharging a super, to the sweeping vistas of Earth, the moon, Venus, and Mars. I’ve poured countless hours into Destiny thus far, and will likely invest countless more as its universe expands in the coming months. 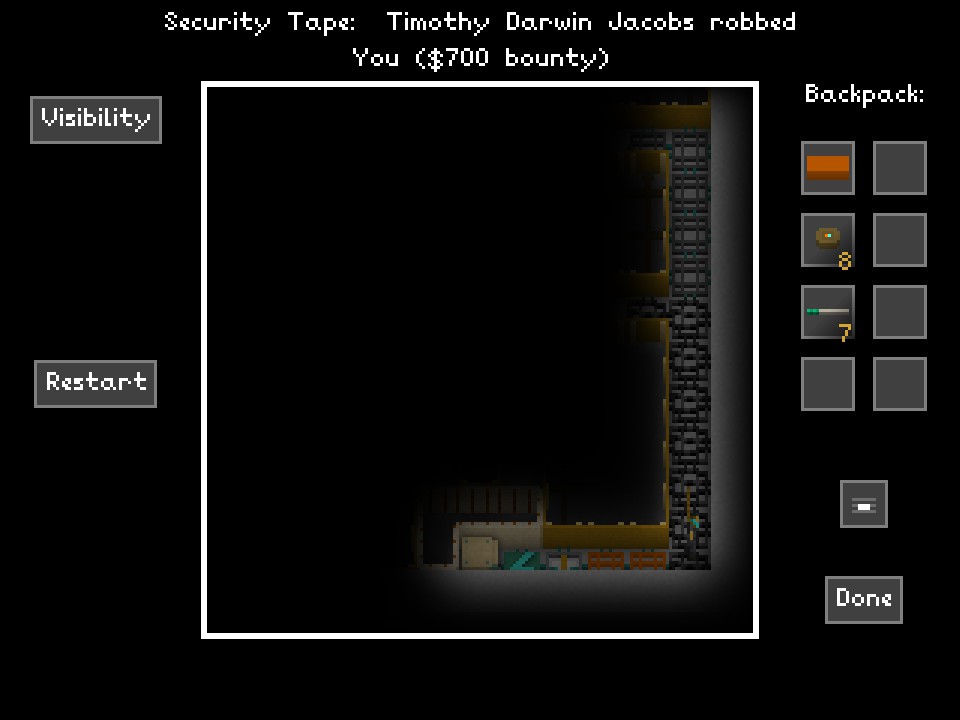 I believe The Castle Doctrine was one of the most overlooked gems of this year. A massively multiplayer game about defending your home against other players while also setting out as a robber yourself? Yes, please. The best part of The Castle Doctrine is how it pits human wits against human wits, forcing players into a perpetual cycle of outsmarting each other if they want to keep their possessions safe. 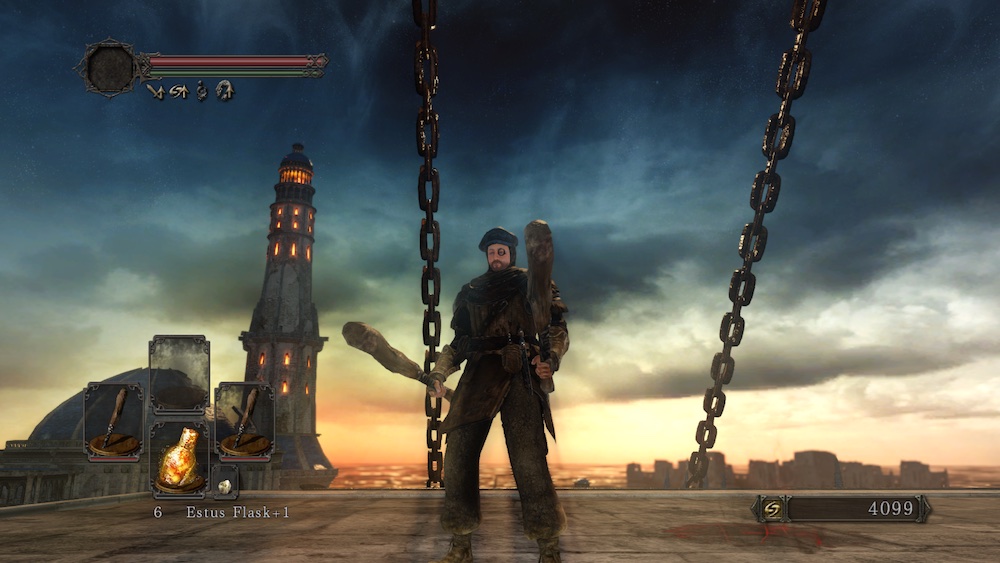 Yes, brutally hard games can be fun. In fact, Dark Souls II was more fun to play through (twice!) than any other single-player experience I found this year.

It succeeds by creating a compelling world and then leaving you to your own devices as to how to explore, interpret, and survive it. Nearly everything is left for you to figure out, and I loved that From Software was able to make the game a bit more accessible while still avoiding tutorials, quest indicators, or anything else that would break away from the hostile inscrutability of Dark Souls. 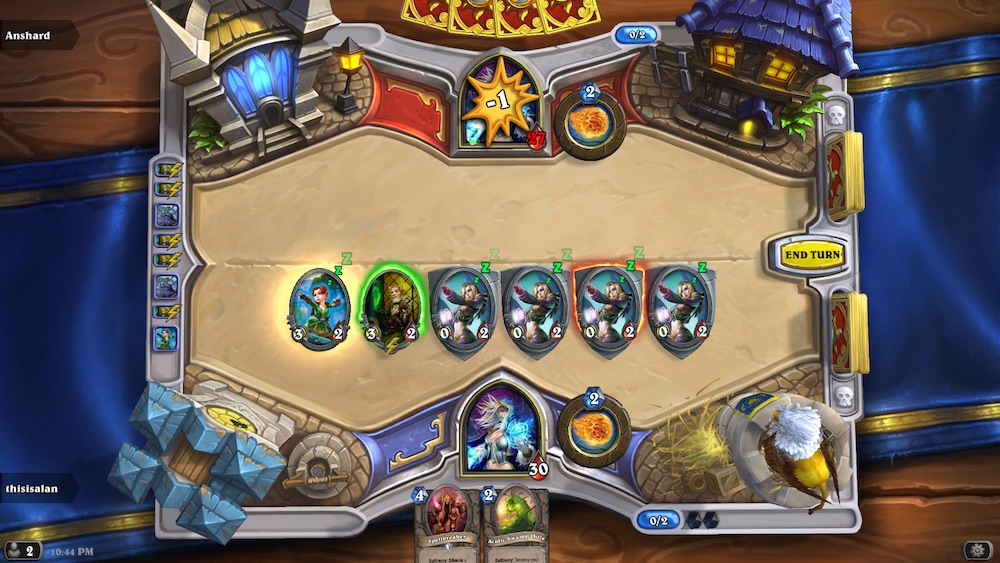 I’ve played a lot of Hearthstone this year, and at no point have I ever come close to getting bored of it. This is due largely to the satisfying mechanics of the game itself, combined with the variety created by its hundreds of cards across nine player classes and multiple expansions.

Hearthstone is superbly crafted, super fun to play, and readily available across my desktop, laptop, and tablet anytime I want to pick it up for a quick game. It’s become an integral part of my week in a way that no other single game has been since World of Warcraft.