Statistically speaking, there's a good chance you have not played the best DS game ever made.

Sucks, but them’s the breaks, huh? The pieces that make up anything entropy apart into nothingness. Maybe one day our ancestors will figure out how to conquer causality itself, but for the time being, we all have an unknown shelf-life.

Great news though; In Shu Takumi’s Ghost Trick, you don’t have to worry about the eventuality of death, because you’re already dead. Yippee!

You’ve met with a terrible fate, haven’t you?

If you were to ask me what the greatest game of all time was, I’d probably go into a catatonic state for 72 hours trying to puzzle it out internally. I can’t promise that when I awoke from this I would answer Ghost Trick, but it would certainly be in contention.

Ghost Trick: Phantom Detective is a Nintendo DS game by Shu Takumi, a writer and director better known for creating the Ace Attorney series. In Ghost Trick, you play as a little wisp of a spirit known as Sissel. The game begins immediately upon your death, with Sissel’s body hunched over in some junkyard. Sissel has no memory of who killed him or why. He barely even remembers his name.

It appears he arranged to meet some young redheaded detective in this junkyard. But, just as she arrives, Sissel is mysteriously shot and killed.

A few minutes later, she’s next.

Sissel figures out some nifty tricks in his new recently incorporeal state. One, he can inhabit and manipulate objects. Two, he can move from object to object, provided they are close enough. And third, whenever he touches a dead body, he rewinds time to four minutes prior to their death.

From here, the first stage of the game begins. Now it’s time to foil the murder, using the entire junkyard as your weapon.

The opening establishes the stakes and rules brilliantly.

From here, the game falls into a thrilling loop. Sissel follows Lynne from place to place, uncovering the mystery of his death. Many people die during this one night, but lucky for them, you’re there to save the day. Like Bizzaro world Picard, you make it not so.

Then, after learning some small piece of the larger puzzle, it’s off to chase the next lead.

Of course, none of this would matter if the people to save weren’t worth saving. It’s here where Shu Takumi’s penchant for writing lively personalities saves the day. See, nice thing about being a ghost is you get to speak to other spirits — any other spirits. Including, say, the family Pomeranian. 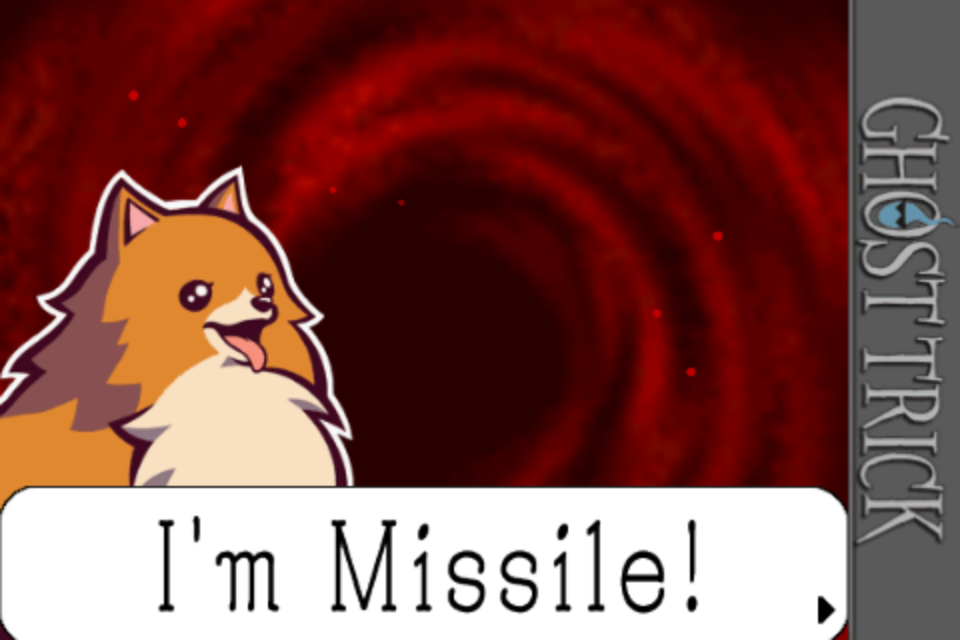 That’s right. Missile the dog meets his untimely end in several instances, all in the name of doing his duty to protect the family. You can’t let that happen to Missile, the goodest boi!

Even if you aren’t much of a dog person, Missile is too delightful a companion to leave behind. And, it ends up, useful too. See, each spirit manifests their powers in a different way. While Missile can’t manipulate objects like you, he can swap items of a similar shape.

And thus is the first of Ghost Trick’s, uh, “tricks,” revealed. In order to keep the game fresh, it begins introducing new friends with new abilities to assist you on the journey to the truth.

Missile is only one of the many delightful characters you’ll meet during Sissel’s final night. I could describe them all in agonizing detail, as I am known to do, but the art direction of Ghost Trick is so good I don’t need to.

Every single character in Ghost Trick exudes personality. You can tell so much from just the way they enter a scene, the way they stand, the way they react to the unusual happenings around them. There are no wasted characters here; Literally everyone you meet has a distinct, vibrant persona. Even two security guards you meet for maybe three minutes total make for a memorable pair.

The truth is, no one element in Ghost Trick is the one that makes or breaks it. I could tell you about the individual pieces all day, but it’s the concert of everything that gives it life. The music, the art style, the delightful cast, and the mechanics all work in tandem to pull you in. Everyone in Ghost Trick is working against the clock, all trying to save someone they hold dear in their own way. Every element pumps up the urgency, and keeps you pressing on towards the truth.

The saddest part of Ghost Trick is simply that it ends. This is, perhaps, one of the best examples of a completed work. There is no room upon the conclusion for more stories, more sequels, more adventures. Everything comes to a definitive close, all mysteries laid bare. By the end, I loved these people so much it was hard to say goodbye. I’m still thinking of them, eleven years later.

I have spared you many dual screen captures, but here’s a brilliant one I couldn’t bring myself to crop.

So why write about Ghost Trick, you might ask? Just because it’s a super cool game not enough people played? True, but there’s a bigger bait to tackle here.

Usually, I end these articles letting you know how to play a game — Where to get it, what platforms it’s available on and such. Well, I hope you have your Nintendo DS and 150 US dollars handy, because that’s how much Ghost Trick goes for now. Maybe 90, if you can find it without a box.

A quick wiki search will reveal there is, in fact, an iOS version, but therein lies the rub. Ghost Trick is designed from the top down to be played with a stylus, not a finger. It works well enough to a point, but Ghost Trick eventually demands a certain precision that’s hard to muster up with a fingertip. Maybe Jack fucking Skellington can do it, but the rest of us are screwed.

Navigating between objects is a fairly core skill in Ghost Trick, a skill made much easier with a stylus.

And this is why I come to you today to talk about Ghost Trick. It is perhaps the nightmare scenario for game preservation. As the years go on and less DS’s become available, Ghost Trick runs the risk of being long forgotten. It was designed with a specific medium in mind which is now dwindling, and difficult to replicate. While it certainly can be emulated or reproduced, the experience will never be the same, especially not on modern platforms with but a single screen.

And this is the real tragedy of Ghost Trick. In a world rife with remasters and re-releases, unless another Stylus-based platform comes out, Ghost Trick is doomed to never be experienced as intended again. Without some thinking outside the box on how to make the gameplay work on a new medium, this whole universe is doomed to fade away.

I don’t have an answer to this problem; it’s the nature of technology to advance and change. All I’m here to say is Ghost Trick ought to be remembered and known for years to come. It’s such a profound game I hope it outlasts me, or even the final memory of me. I hope it inspires for years to come, long after I'm gone, and its creators are appreciated for their genius in their lifetimes.

I’m simply here doing my part to try and make that a reality, one decade after release.

Me, screaming the good word of Ghost Trick directly into your ear. If you can find a way to do it, please play Ghost Trick.