Gundam Evolution is a fairly shameless rip-off of Overwatch in terms of overall design, but in the wake of the Overwatch 2 launch, some choices stand out as superior to its progenitor counterpart.

If you’re lucky, you’ve experienced Overwatch 2 by now. Either that, or you’ve stared at this screen: 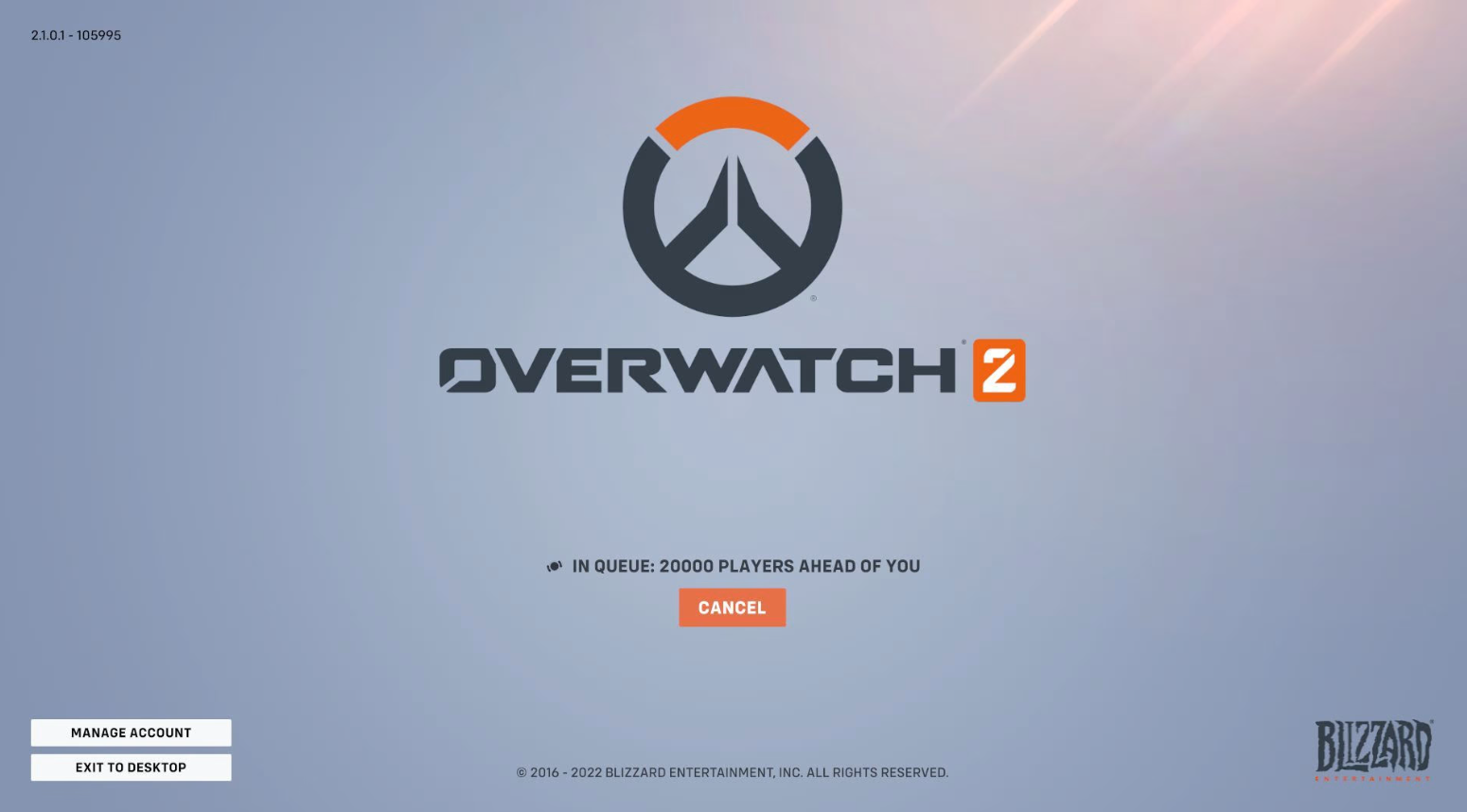 And never got into a game. Not the first Blizzard title to have a cursed launch, and it probably won’t be the last. At least it didn’t take all of Battle.net down like Diablo 3.

Overwatch 2 has been plagued by technical issues since release, problems like:

However, I won't be discussing these in much detail here. Some were corrected while I was in the middle of writing this article, while others I imagine will be fixed by the time I hit publish. Harping on temporary bugs and glitches which will be irrelevant in a month or two (hopefully) isn’t the most efficient use of our time.

The real issue is if Overwatch 2 worked perfectly, I still wouldn’t want to play it.

After about three hours with Overwatch 2, I did not want to play anymore Overwatch 2. I would’ve loved to go back to Overwatch instead, but guess what? I can’t do that. Overwatch 2 is the new Overwatch. Adapt or die.

I have adapted by seeking out a new Overwatch-esque experience, which somehow led me to Gundam Evolution. I figured it would be worthwhile to go through all the reasons Gundam Evolution has won me over in a way Overwatch 2 did not, in a three point list. A classic format for this website at this point.

1. The Diminished Role of Support and Tank Roles Feels Better Designed and Accounted For

On paper, I was optimistic about the goals of Overwatch 2. Eliminate the walking balls of death, lower the impact of crowd control effects. Encourage players to get better at moving and shooting instead of capitalizing on powerful abilities. And, perhaps most importantly, add a bunch of PVE content to finally cash in on the lore of the world which thus far has only been explored in outside media.

While the mechanical alterations raises the skill ceiling and makes the game less approachable, it could lead to more impressive solo plays and allow someone to pull out a clutch win.

On paper, that’s great. On paper.

In practice, it doesn’t feel like Overwatch 2 was redesigned from the ground up to accommodate this new approach. Character abilities have been modified across the board, but the adjustments range from minimal to baffling. Tank characters who were good off-tanks don't seem to have decent kits to reflect how they're now the sole tank for the team. HP values have been increased, but since DPS players are free to act with less fear of stuns and traps, and they only have one tank to focus, these former off-tanks melt.

Doomfist made the leap from DPS to Tank. As you can see, it’s going great.

I will not be surprised if in two weeks only three of these tanks see any play, while the rest sit on the bench and wait for a future rework.

Methuss here has access to a healing tether, and deploys turrets to control a point.

The majority of units in Gundam Evolution are hybrid units. They have a mix of damage, support, and defensive techniques, allowing everyone to get in the fray.

Every unit also comes with a booster engine which facilitates quick strafes, advances, and retreats. These boosters aren’t built equally, mind you; bars on the bottom left indicate how many quick maneuvers the Gundam can perform before a recharge is necessary. Fortunately every unit has a minimum of at least one, so no matter which unit you choose, you have access to abrupt shifts in direction.

You can also hover in the air, but doing so comes at a great cost to your accuracy. If you’re playing as a unit with a scope, it is impossible to look down the sights while coasting around.

All of this leads to a game where the roles aren’t as clearly defined, but teamwork is still essential to success. Melee units especially are built around an engage-and-disengage approach to combat, pouncing on key openings rather than swinging around wildly.

Gundam Evolution is more demanding of your attention and shooting aptitude in order to make victory possible, but that's also exactly what I was looking for (and didn't get) from the current state of Overwatch 2. 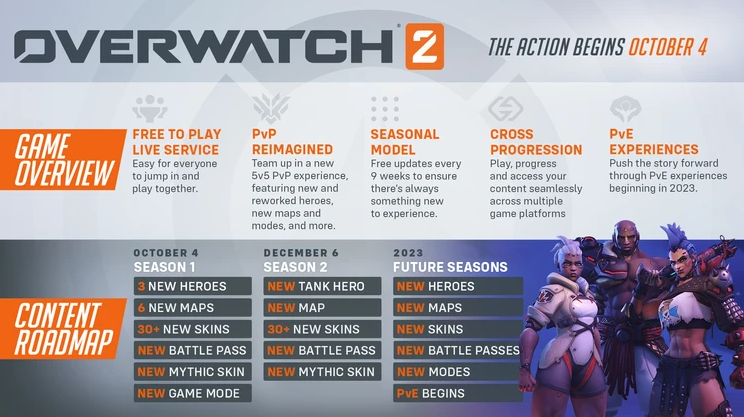 Remember that PVE component to Overwatch 2? Yeah, it’s not out. It probably won’t be for a while.

Despite the “2” at the end of Overwatch 2, there’s actually shockingly little added to this release. We have a new mode with a robot, some new maps, and a handful of new heroes. It is entirely possible you may hop into Overwatch 2 and see all the same stuff you saw before, but with less tanks in each match. It is perhaps the most damning--well, second most damning thing--I can say about Overwatch 2. There is very little new content here, and yet I don’t enjoy the handful of changes on display.

Among those changes is the new business model, which in some monkey-paw-wish-gone wrong, does away with the loot boxes but replaces them with something worse. Heroes are now locked behind a battle pass. The currency to unlock new items or skins slows to a crawl, and your only method to speed it up is spend money on coins. Overwatch launched at a $40 price tag. Overwatch 2 has launched “free,” but stands poised to make a great deal more than $40 per user. 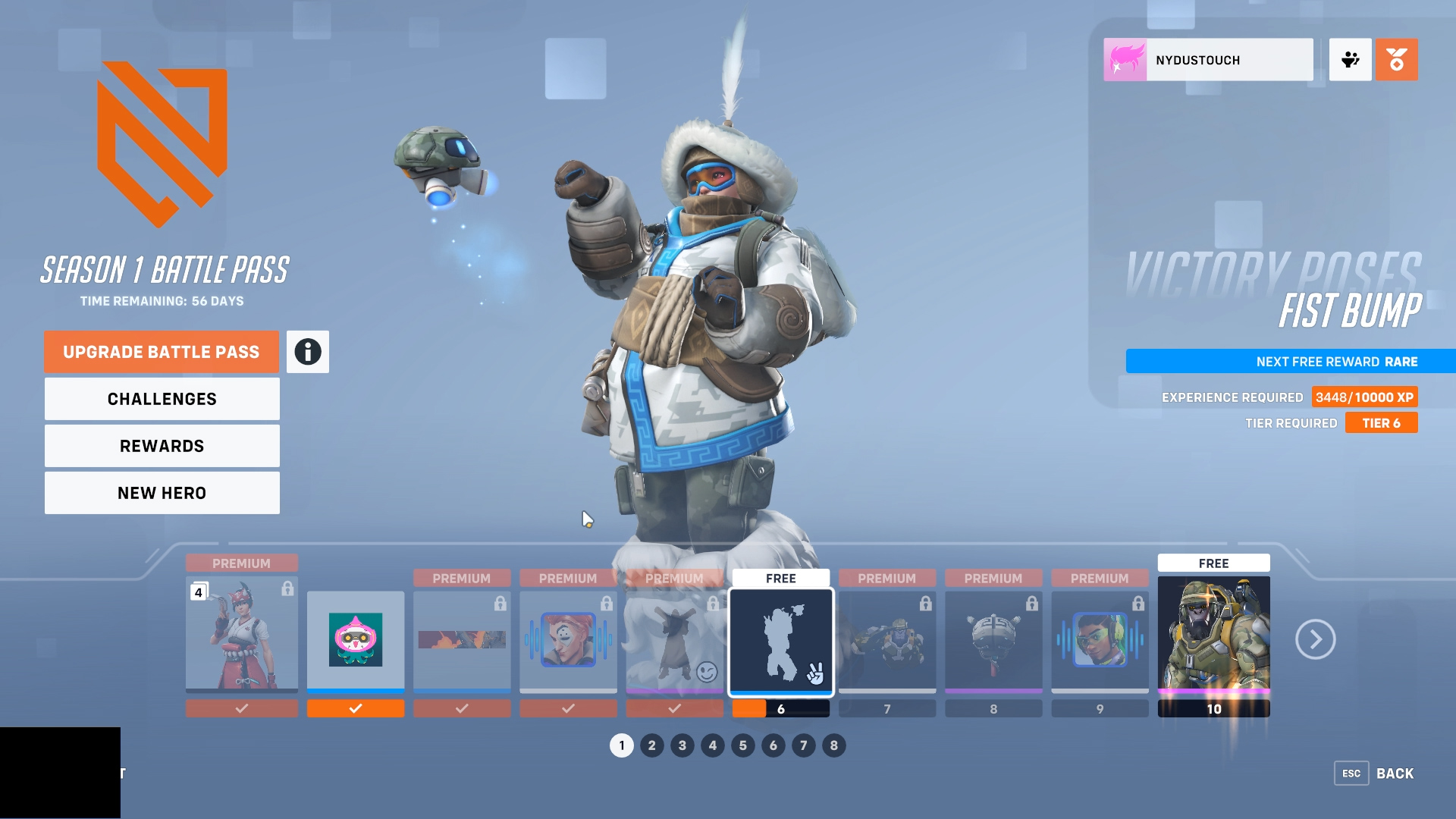 The pickings are slim in this battle pass.

Meanwhile, here’s Gundam Evolution, a brand new free release full of brand new maps and content you’ve never seen before. It has not been out for long, so at the time of publication so I cannot comment on release schedules or frequency of updates, but as of right now, there’s a lot more new content to experience over there.

Currently Gundam Evolution has ten maps and three modes. Destruction is reminiscent of Counterstrike-style bomb placement maps, Domination is similar to Overwatch’s attack and defense modes, and Point Capture cycles through three locations to duel over. There’s no sign of payload maps, but quite frankly, I can live without ‘em for now.

Maps are designed with clever points of ingress and egress which make use of every suit’s heightened mobility, and narrower openings yet provide unique paths for transformation Gundams.

My biggest gripe about Gundam Evolution currently is there is no way to test out the Gundams locked behind a paywall first. At the very least, I feel they ought to be available in training mode so players can make an informed decision. 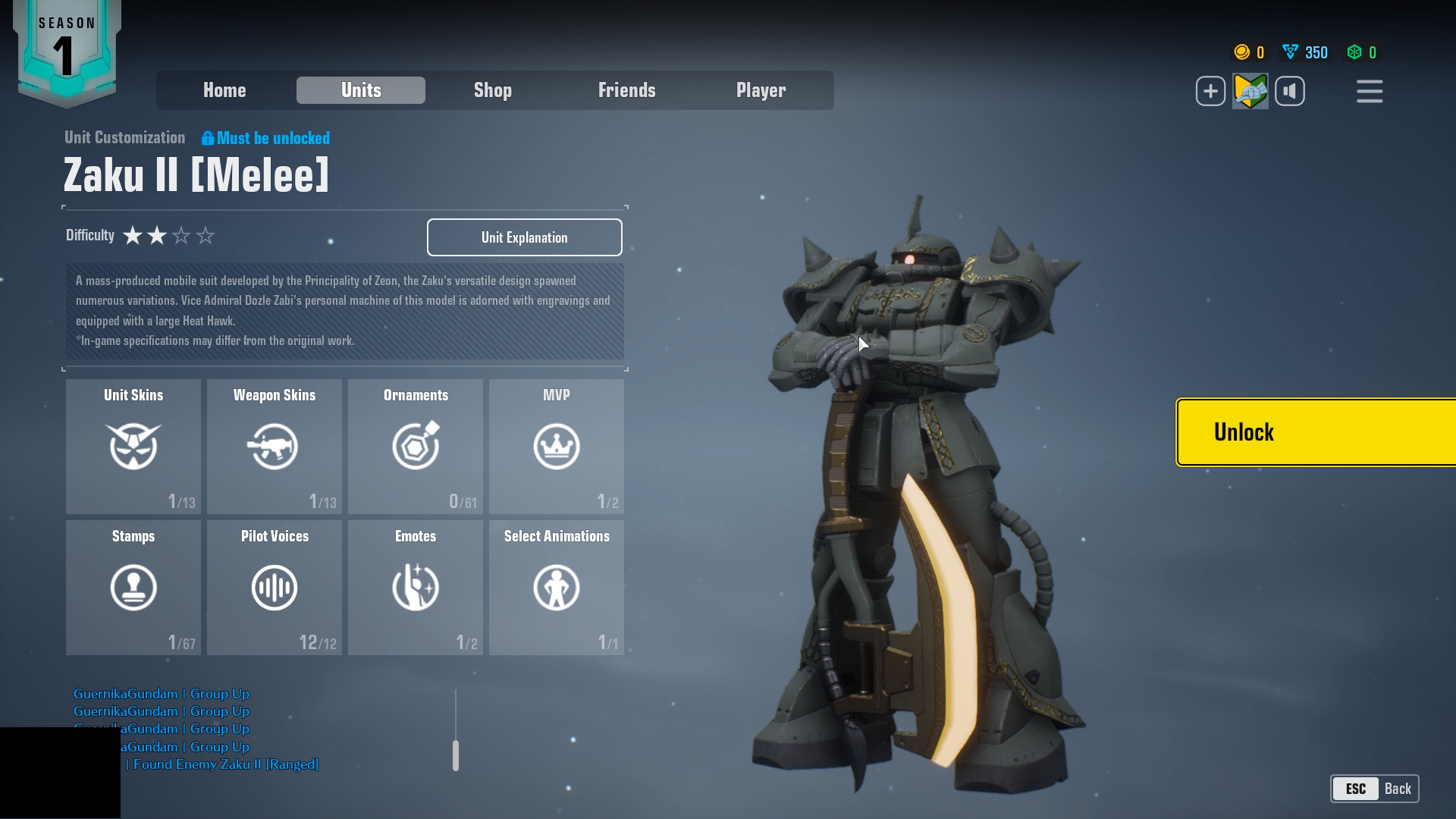 I get every game needs to make money, but we can’t slap a TEST RUN button on here or something?

If what you’re looking for is something like Overwatch but new, Gundam Evolution delivers better than Overwatch 2, somehow. As for whether it not it will survive beyond the novelty, I suppose that remains to be seen. For now however, it’s made a strong (and I would argue underrated) initial showing.

3. No Gundam Has Been Renamed Because of a Sexual Assault 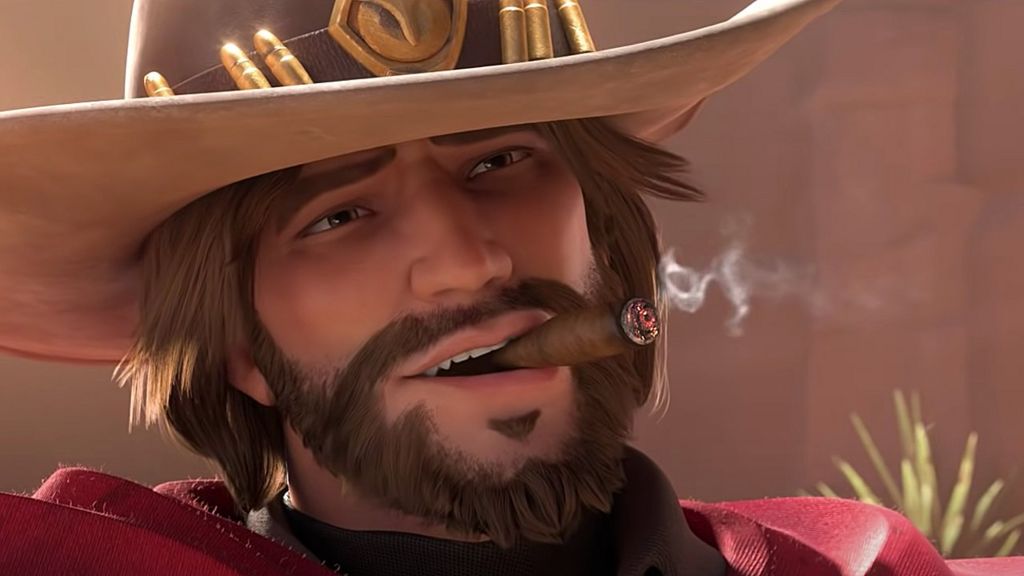 On August 26th, 2021, Blizzard announced McCree’s name would be changed to “Cassidy”.

If this will be your first time finding out why, I must say, I’m impressed you managed to avoid the news from major gaming outlets and landed on us instead.

McCree’s name was a reference to Jesse McCree, a lead designer at Blizzard implicated in a rather damning series of hotel room pictures and chat logs which spanned multiple years. This all came to light in the wake of a lawsuit from the State of California over a discriminatory work culture and criminal sexual allegations, the worst of which includes the account of a former finance manager who committed suicide at a work retreat in 2017.

In the wake of this Bobby Kotick, CEO of Activision Blizzard, released a statement promising “swift action” and “long-lasting change.” But you’ll have to forgive me if such words ring hollow when Kotick himself has spent years trying to bury every allegation so deep in the dirt it would take fucking Mr. Driller to find them again. While many of the bad actors implicated have since been let go, so long as Kotkick remains CEO, it's hard not to feel morally conflicted about launching any Blizzard product.

Meanwhile, the worst I can report about the Gundam Evolution developer, Bandai Namco Online, is the business model kinda sucks. The free currency you receive for playing does not come at a steady pace. Each new Gundam will run you about ten dollars each if you buy them outright, otherwise you’re looking at grinding out a month of daily achievements. Less perhaps, if you have more time to play than I do. 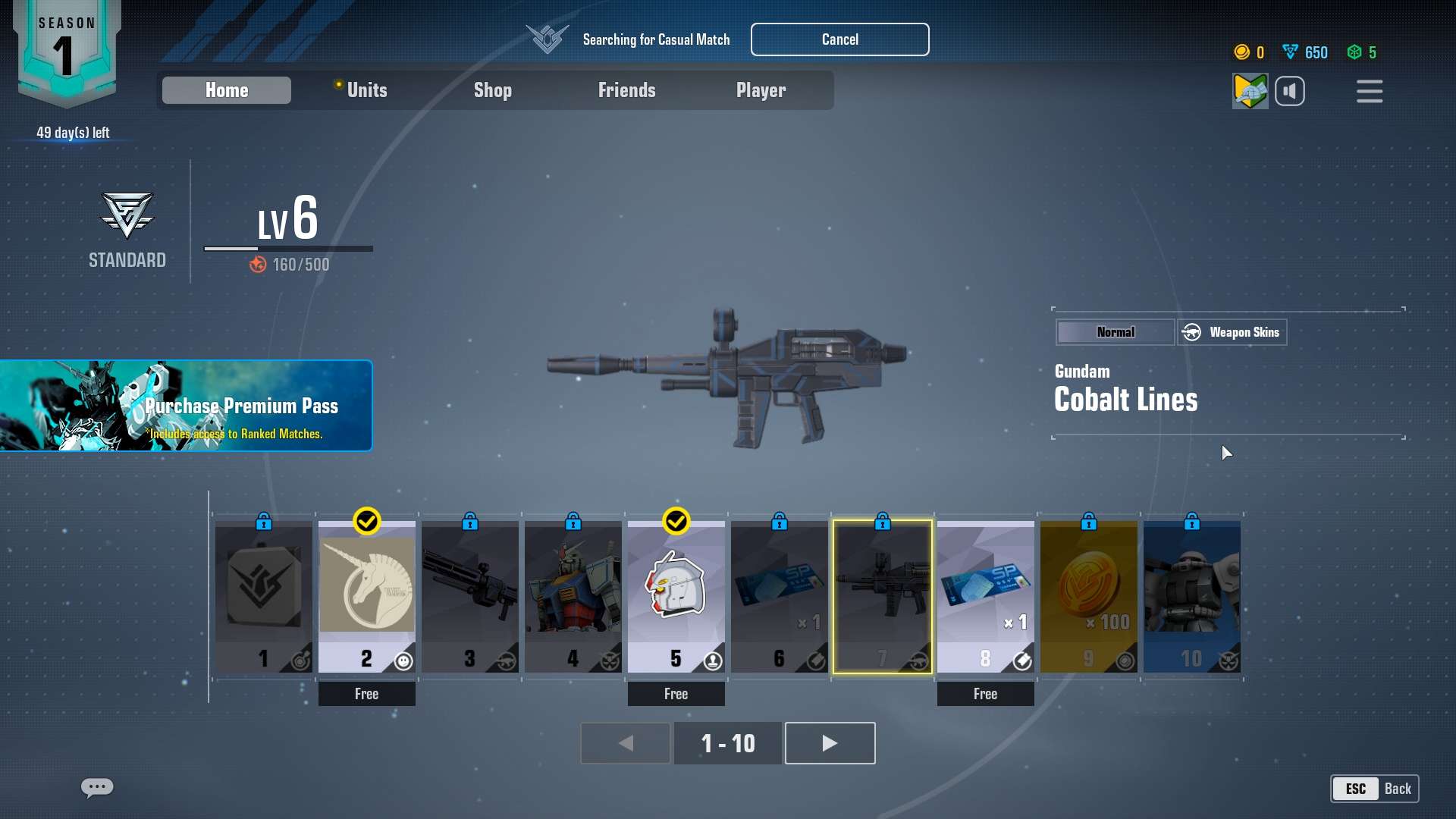 The pickings are pretty slim in this Battle Pass too.

It’s not great, but at least I don’t have to link you to a news article where Bandai Namco employees had a hotel room dedicated to a famous comedian from the 80s now serving a jail sentence.

When I compare Overwatch 2 and Gundam Evolution, I see two games trying to accomplish similar tasks, but somehow the one that should feel more like a freemium cash grab feels more fully formed and novel. The cast feels more cohesive, aiming and shooting feels snappier, and everyone has universal mobility tools to survive in a quick-to-death environment. Overwatch 2 feels like a pale imitation of the game that came before, which is especially tragic when you consider it’s mostly the same game.

The only exception where I would not recommend Gundam Evolution is if Overwatch was your “wind down” game, so to speak. A slow, less demanding shooter you could relax with. Gundam Evolution demands a lot more of your brain power and reflexes than Overwatch did--but unfortunately for you, so does Overwatch 2 now.

And, if your objections lie more on the moral side like myself, Gundam Evolution will help you get your Overwatch fix and still sleep at night.

Gundam Evolution and Overwatch 2 are both free to play and available now.