Luck and a Duck run Amuck

Let me tell you 'bout a studio makin their debut / Duckbridges' Luckslinger is shootin' true.

Disclaimer: Every picture of Luckslinger in this article is accompanied by terrible rhymes. I apologize in advance for this heinous crime.

Back in the far off year of two thousand and thirteen, I said this about Call of Juarez: Gunslinger:

Not since Sunset Riders have I had such a good time as a cowboy (Sorry, John Marston).

I won’t spend too long on a preamble to this review of Luckslinger, but bias is important to recognize and disclose. I have a bias to disclose. A large one. 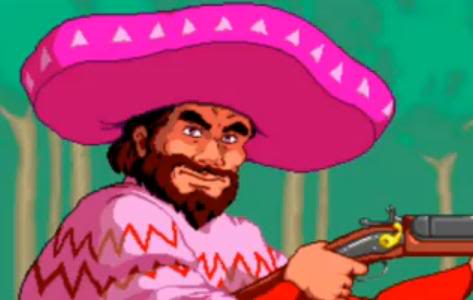 Look at his face. Cormano knows his game is the king of coin-ops.

Anything resembling Sunset Riders gets a head start here. Were I a professional cactus judge, A cactus with a sombrero, poncho, and a "Hello my name is Cormano” sticker slapped on it would be operating at +9 on the scale, regardless of the quality of its stomata. 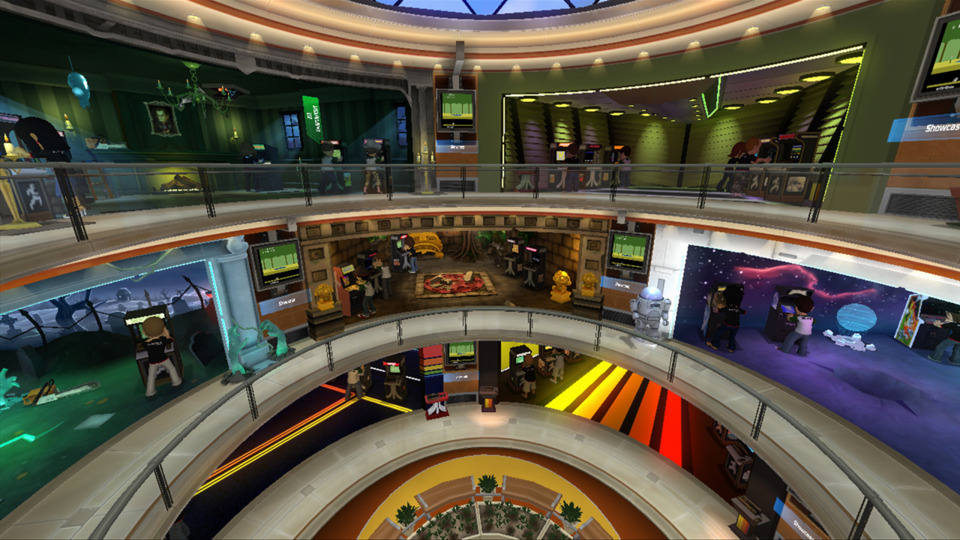 If Xbox’s Game Room had followed through on its promise to acquire Sunset Riders, I’d tell you it’s the greatest platform to ever exist. 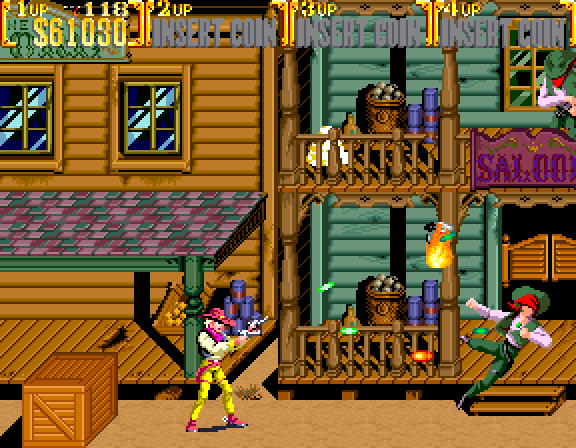 Keep your feet shufflin’, left to right / Only time to stop is when you find the boss fight.

You might see how Luckslinger gets an unfair advantage ‘round these parts.

I liked everything about Luckslinger as soon as I saw it. The minimalist pixel art, the way the world pulses with the music, the simple-to-learn, tricky-to-master toolset in a player's arsenal, the duck - it's a game I’d been waiting for, but never knew I wanted until that moment. A merging of my love for pixel-art indie games and westerns. A Fistfull of Pixels.

I bought it the day it came out and attempted to play through it in one sitting. As the sun came up and birds started chirping four hours later, I re-examined my life choices. I sat in the living room staring at the opening to the second stage - an opening I’d now seen at least fourteen times - and came to acknowledge two dreadful truths. The first truth is my priorities for the evening, which were;

Were not in the optimal order.

The second truth is Luckslinger is hard.

Don’t be takin’ bullets to the head or the face / I highly advise keepin’ your brains in one place.

Minecart tracks to a ditch? That don’t seem fair / If you go for a ride, best say a prayer.

No hot lyrics here. this shit is whack / What am I to do but have a panic attack?

Here’s the basics of Luckslinger. LS’s primary weapon is a six-shooter, which requires the player not only find time to reload, but also be weary of bullet climb from successive shots.

Shoot too hot and the lead start to rise / Run outta bullets and it’s time to improvise.

LS also has a throwing knife for desperate situations, which can be thrown different distances based on how long the button is held. It can’t be thrown again until recovered, either by Luckslinger or his trusty duck, Duckbridge. For defensive maneuvers, there’s a roll Luckslinger can perform to dodge bullets and a good old fashioned jump. Learning when to use the roll versus the jump to dodge bullets is an essental lesson to survive Luckslinger’s later challenges.

As you may have guessed from the name of the game, “luck” is such an important aspect it has its own place on the UI. The gold circle in the top left of the screen is a lucky bracelet. In Luckslinger, “Luck” is a resource you can acquire from kills or chests. The more luck in the bracelet, the more likely you are to be saved from death at the last minute, either in the form of magic missing bullets or timely cliffside objects to stop your fall.

See you later bullets, I ain’t even there / Enjoy your ride through thin air.

When luck is high, you’ll also sometimes load lucky bullets into your chamber, which will curve towards enemies when fired.

You tryin’ to hide? Well that ain’t gonna fly / Watch my shot find the spot between your eyes.

However, if the bracelet is notably devoid of shiny gold objects, the opposite is true. Unlucky events can occur in every stage. Water towers collapse. Artillery fire blows craters nearby. Enemies pop out of unexpected places. All these events are telegraphed by a quick flash of red in the corners of the screen.

When you see the flash, best take note / Leave it alone and you’ll be smoked.

This is the genius of Luckslinger. Duckbridge has taken an RNG (Random-numbers-game) mechanic, and made it not true RNG. If a water tower suddenly fell on LS and killed him in the middle of a stage, you’d be justifiably pissed, but that isn’t quite what happens. There’s a flash around the screen, then the tower starts to collapse, slowly, giving the player enough time to dodge it. RNG decided the tower would fall, but the game still provides enough information for the player to have a say in whether they get crushed. It creates the illusion of chance without being pure chance. It’s Disney's creative imagineering in game design form.

Nice try Windmill, not even a nick / How about you suck on my- Oh. Oh dear. Abort rhyme!

Luck becomes a reward for great play as well. The longer you survive without taking a hit, the more luck builds up in the bracelet. Soon hearts and extra lives are flying out of everything. Every stage has a card game, where three green cards nets you a bonus item. With low luck, you could burn twenty dolari without any result. With high luck, you can get your pick of any weapon you desire.

The shotgun is my particular favorite. One solid shot can take off a healthy chunk of a boss’s life, or save you from a nasty pincer ambush.

Luck applies to other events in later stages, too. In a casino stage, there's a room where eagles drop off a small batallion of armadillos and rattlers. With high luck in the same room though, well… the results are quite different.

Hearts upon hearts, oh my my / This is one hell of an oversupply.

As fond as I am of Luckslinger’s titular mechanic, it’s also where my first problem became apparent. When you die in Luckslinger, you pick up from the last checkpoint with a barren bracelet. It’s a serious momentum killer, and makes sections you were once able to breeze through a real chore. While I certainly understand punishing a player for death, I worry this is too punishing for challenging sections, especially in conjunction with the next concern.

What held me back the most from enjoying Luckslinger is the archaic lives system. Just like an old NES game, lives allow you to start from the last checkpoint. Once the lives run out, you start the entire stage over. This became my own personal kiss of death in the later stages, as I’d arrive at a boss fight I’d never seen before with a single life. Every boss is an old-school, MegaMan style, pattern-based fight and having to battle my way through an entire stage just for a chance to die to a new boss wore on my patience.

I have no problem with an old school game philosophy; I like when games show real teeth, challenging me to try harder and faster, to make better use of all my tools. Around the tenth time watching Luckslinger descend into Goldberg, however, I started to think perhaps Luckslinger was old school to a fault.

I realize these last couple paragraphs make it sound like I’m gearing up to hammer Luckslinger and brand it with a low number. First off, even with these problems, I still think Luckslinger is far above the average indie pixel platformer. Second, there’s a twist to this story.

While in the process of writing this review, Duckbridge addressed both issues within the same week.

The first patch altered the loss of luck upon death. Now LS retains half his luck when starting from a checkpoint. The second added a new difficulty choice called “new school” to the options screen, which allows players to start over from the last checkpoint repeatedly, effectively eliminating lives. Even after this change was made, after recognizing how much I'd been wishing for it, needing it, I still stubbornly tried to stick to “old school.”

Oh. Wait a minute. My skills must be inferior / Goldberg is gettin’ way too familiar.

After another four tries at Goldberg, I switched the difficulty setting and never went back.

I’m glad I did, because some of the later stages reached heights of difficulty I haven’t seen in years. I’m terrified, thinking about how many attempts it might’ve taken to try and beat the game without the new school option. And yet, the fact the old school setting is still there, taunting me in the options screen, is something I appreciate. I enjoyed my time with Luckslinger enough that there may come a day I return to challenge it “old school,” now armed with foresight of what is to come in each stage.

And I plan on doing this soon, because Luckslinger is one of the best indie games I’ve played all year.

Everything in Luckslinger is booming with style. Art assets in every stage bounce and move in tune to the music. Even the sound effect queues for picking up hearts, luck, or extra lives seem to happen in beat with the music, as if they were written right into the measure. Only the blasts of gunshots break the flow, but they're one hell of a blast. Even though every bullet is only a few grey pixels, the roaring sound of a shot sells the impact behind each bullet.

While I’m lavishing Luckslinger in praise, let's talk about the fantastic gameplay loop, too. It’s like this:

Hello Sheriff, here to get a bounty / Oh, uh... are you the only Sheriff in this county?

It’s a gameplay loop that provides great contrasts between action and downtime, but also serves as a small narrative thread, giving players an opprotunity to see how their actions are improving the town after each bounty. There’s even optional boss fights and traditional western showdowns to beat, all of which yield additional gold bars as a prize.

What makes LS so bold? / Every night he sleeps on a bed of gold.

Luckslinger took me seven exhilarating hours to complete, and I can’t recommend it enough to anyone who likes their games old school.

But if Luckslinger is makin’ you blue, it ends up new school can be great, too.