The desire to play a Japanese RPG took me to some strange places recently. It started with Magna Carta 2, which somehow led me to Nier, which somehow led me to Resonance of Fate. The downward spiral continued on to The Last Story, where my desire to play games with a much more eastern design philosophy finally came to an end. (If Xenoblade Chronicles wasn’t such an audacious amount of money, the spiral might’ve continued).

We’re starting with Nier, which means it has the misfortune of being my whipping boy. I’ve brought Nier to the JRPG Altar so that I might ritually sacrifice it, and place its most bothersome, annoying parts on display for the world to see.

The problems I present here relate to more than just Nier. They extend to almost every JRPG I’ve played during this recent and inexplicable attraction to the genre. I love them in spite of the following issues that seem to spread like a plague.

Before I begin tearing out the truly awful parts of Nier and extrapolating them across an entire genre, I’d like to start with the good things. I played Nier through to the end, and I would not have done so if the game were full of nothing but annoying and trite mechanics. 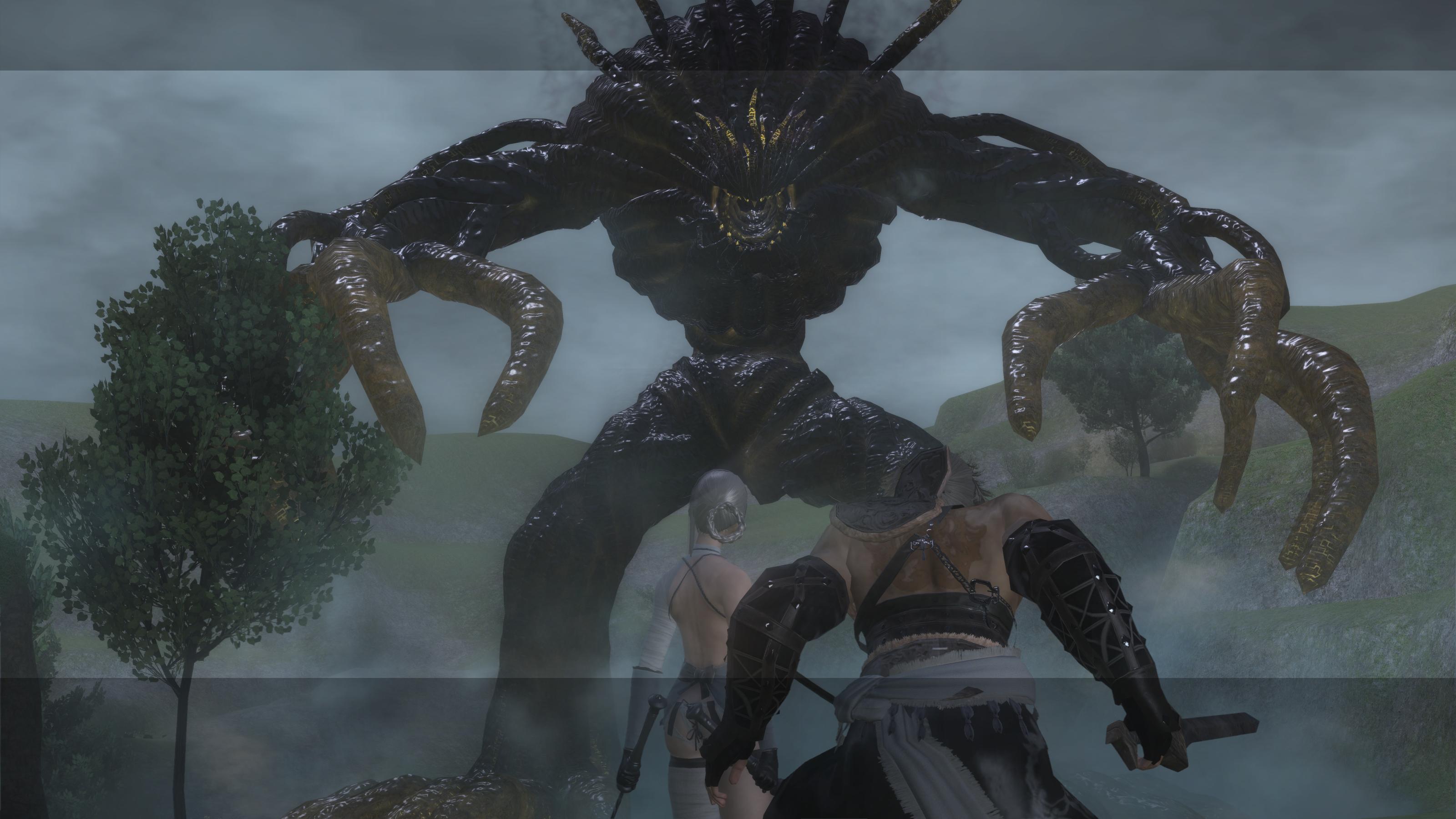 If a boss creature in Nier is only double your size, it is still smaller than your average eldritch horror.

My god, the music! There’s no sarcasm here; Nier’s soundtrack is incredible. Many songs from Nier still have a home on my various devices.

Early in the game, a character named Devola sits in the town square and plays a song on her guitar (or lute, I suppose). When you wander away from her the vocal track fade out and only a faint guitar track remains. I sat next to her for a long time just to let the following song play over and over:

The soundtrack goes on to incorporate haunting choirs, and somehow manages to seamlessly combine some heavy percussion and killer guitar riffs without overpowering the chorus of voices. You can hear the following song kick into overdrive around the 3 minute mark.

There’s a certain lack of quality I sometimes expect from voice acting in games the require localization, but Nier does not suffer in this regard. I can actually recall, from memory, the names of every character in the game. The cast may be small, but they made a powerful impression.

Of special mention is Grimoire Weiss, a wisecracking book that floats around you the entire game. He’s an unwilling ally at first, and as a result many of his lines of dialogue reflect an irritation with the protagonists actions. He complains and berates the entire game, but does so with an impeccable wit. 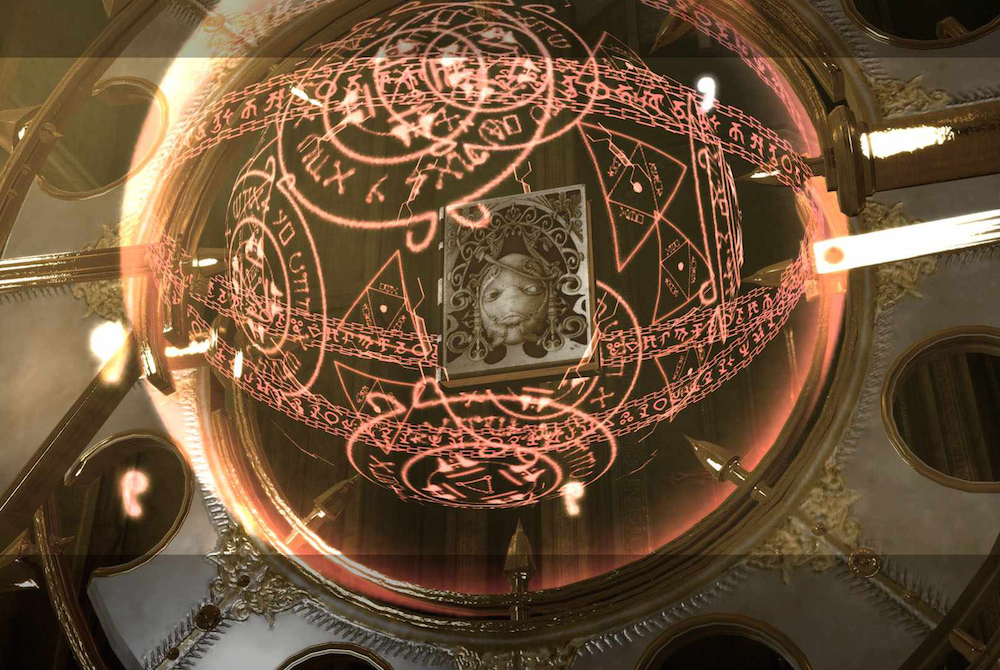 This book mostly talks just to judge you.

One thing I’d like to add though; having a character coyly tease the player about having to do absurd and mundane tasks and then making the player perform these tasks anyway is kind of a dick move. 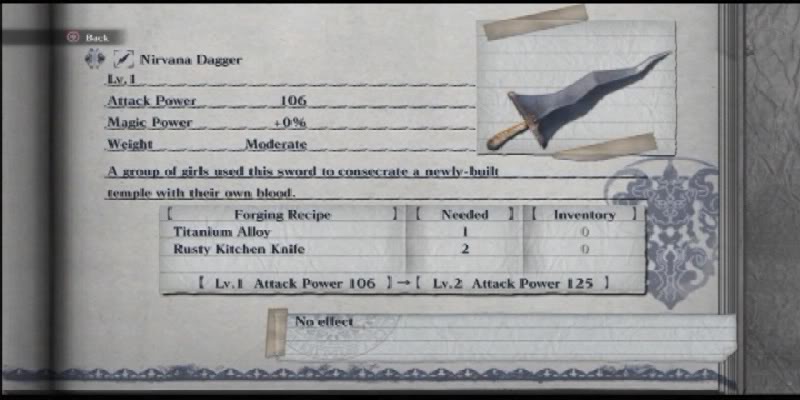 Grimoire Weiss doubles as your equipment and magic screens.

The rest of Nier’s qualities are debatable. Appearances vary from area to area; textures range from pretty to passable. Other locations, such as the desert city, look rather bland. There’s also a variety among the weapons, spells and techniques you’ll get to use throughout the game. This is good, because the amount of combat borders on the absurd.

With that, its time to drag out some of the less endearing traits. We’ll start with the most common offense among these games…

Side-quests are not uncommon in any RPG. Since before the dawn of Final Fantasy there’s been bevys of hidden tasks to accomplish, secret bosses to fight, and the game-long item exchange of, “trade townsperson X for item Y, which townsperson Z will take for item Q.”

There’s one type of these side quests I’d like to see end forever. One I’d like us to all move on from as a people. I’ve dubbed it “The Shopping List.”

I guess no one in Nier has working legs, because almost every sidequest in Nier involves collecting someone’s supplies for them. These supplies include metal scrap, bolts, animal furs, and anything you might see on a picture of the Food Pyramid. None of this is immediately awful at the start of the game. Many of the sidequests early on take place along the main story path, or simply involve walking down the street to a nearby store.

These quests are decoy quests. They are there to lull you into a false sense of security so Nier can hit you with hard stuff later. Pretty soon you’ll be fishing in the same spot for hours to appease some needy fisherman, or wandering across the entire known world to acquire one specific item that is only sold in one town. 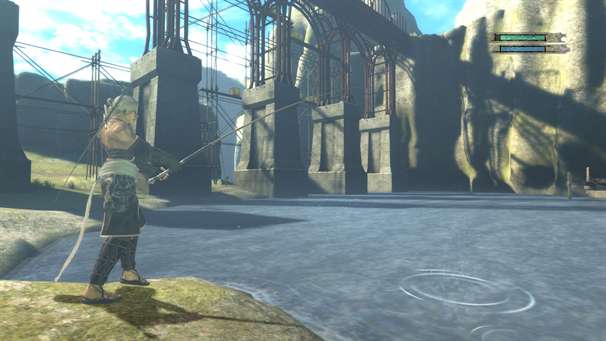 There’s an unreal amount of fishing.

The most egregious side-quests were “The Despicable Man” and “The Runaway Son.”

The Runaway Son though, is the real kicker:

From this point there is nothing further to be done. The quest is over. You never receive a reward. It would be a clever satire of side-quests... if the game didn’t have 99 more just like it, and it didn’t waste several hours of your time to do it.

Thankfully the side-quests in Nier are optional, provided you don’t mind missing out on two of the four endings to the game. If you make use of the internet’s collective knowledge, you can still see those endings by narrowing it down to only three of Nier’s side-quests.

Nier is less guilty of this then the other games in the genre. It has its moments, but Nier has too much respect for its own story to leave major plot twists to text boxes.

This is not so in many other games listed in the downward spiral.

Anyone who’s played Guild Wars 2 might have an idea of what I’m about to discuss. There’s this strange occurrence in recent JRPG’S where the background fades away, a static image appears, and two character models begin talking to each other on the sides of the screen. This is to mimic a one on one conversation, and it certainly works… until other people need to join in.

My objection to this approach to conversations is how restrictive it is to physicality and staging. As soon as more than two people are involved in the conversation, characters begin popping out of the sides of the screen. If more than five people are involved, the entire thing becomes reminiscent of a vaudeville juggling act. There’s no way to effectively stage physical interactions in such a format. If one character smacks another in jest, it’s reduced to a sound effect and a notation of “slap!” in a text box.

Perhaps the most egregious example of this appears in Magna Carta 2. At one point in the game, the traveling group makes the acquaintance of a new character. The group disperses around her and a conversation starts.

The conversation comes to a halt as soon as it started. A static image of all the characters standing in the same circle we just saw appears in the background.

Then the cycling of characters along the sides of the screen begins. After two minutes, I expected characters to start popping out of the top of the frame to deliver a line before vanishing again. 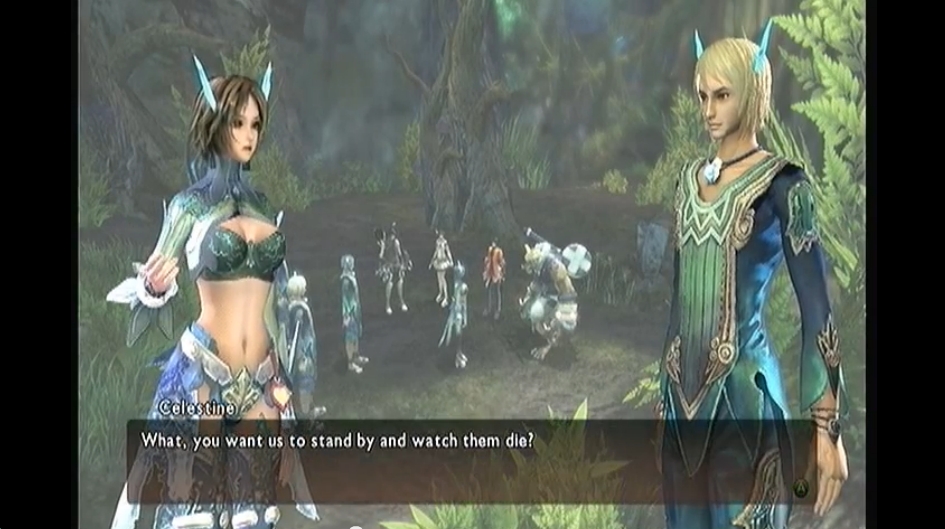 These characters are talking on top of a picture of themselves… a picture of a cutscene I just saw seconds ago.

It’s a dizzying sequence, and the most baffling part about it is that it probably took more effort to create this shuffle-crazy sequence then it would have to simply allow the conversation to transpire as it was laid out before.

This is Nier’s greatest offense.

On many occasions in Nier, you’ll be locked in a room. The only way out is to kill every single enemy that appears for the next ten minutes.

These sequences are made even more annoying when coupled with the fact you just killed a million things to get to into the room in the first place. Almost every major combat area in Nier follows the formula of: 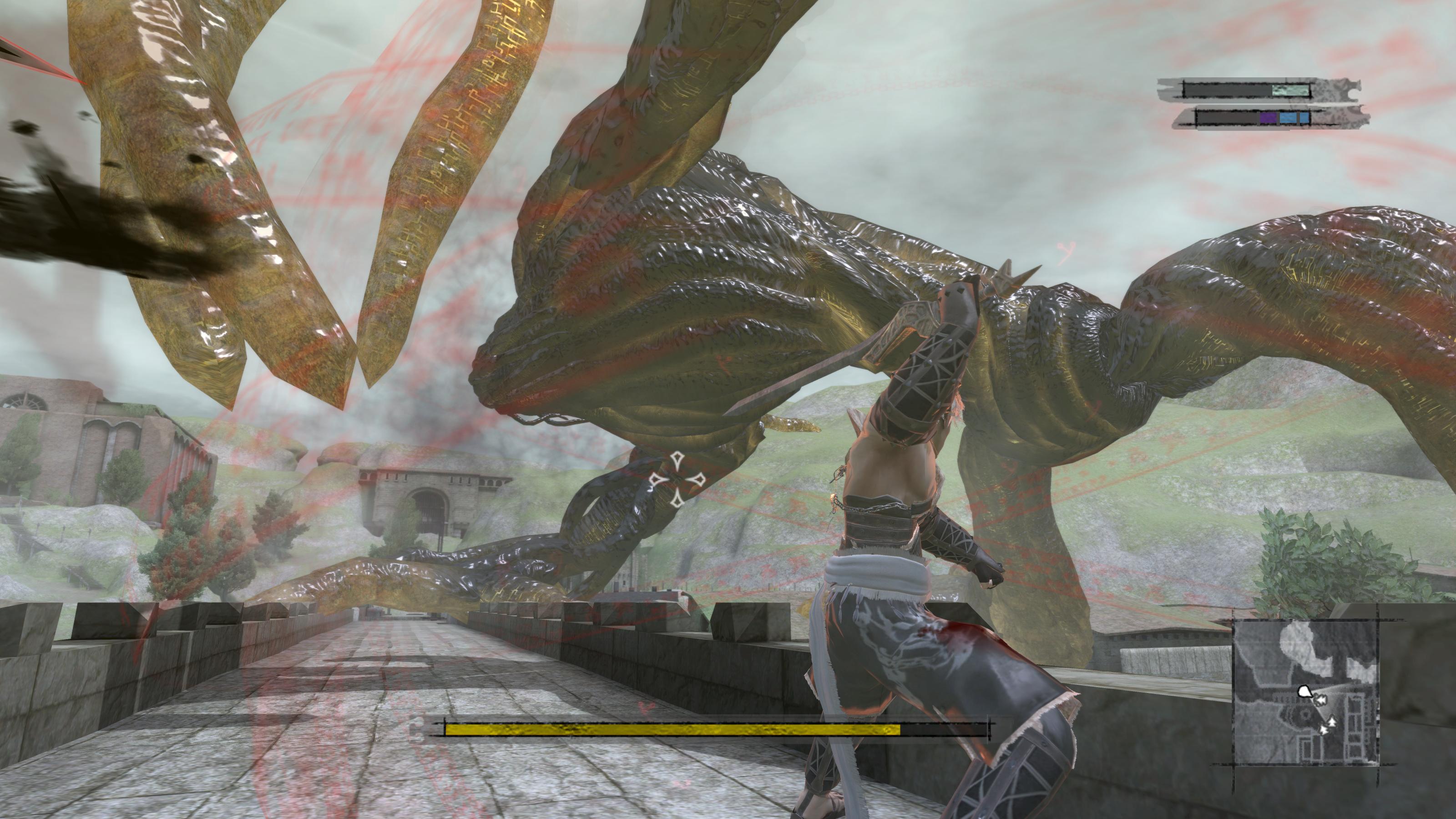 When you do finally get to fight a massive boss, it almost makes up for the relentless amount of hacking and slashing.

There was a moment where the plot of Nier took me to a desert dungeon called “The Barren Temple.” I was presented with 7 open doors, each leading to an giant empty room.

I knew what was coming. I almost turned off the game and never played it again.

When I finally geared myself up for a gauntlet of kill rooms, I was pleased to discover the end result was not as bad as I thought. They were kill rooms, yes, but they were kill rooms with special conditions. “Beat this room without jumping,” or “beat this room without standing still.” They were small things, but the unique conditions presented just enough of a challenge to make these Kill Rooms less tedious. 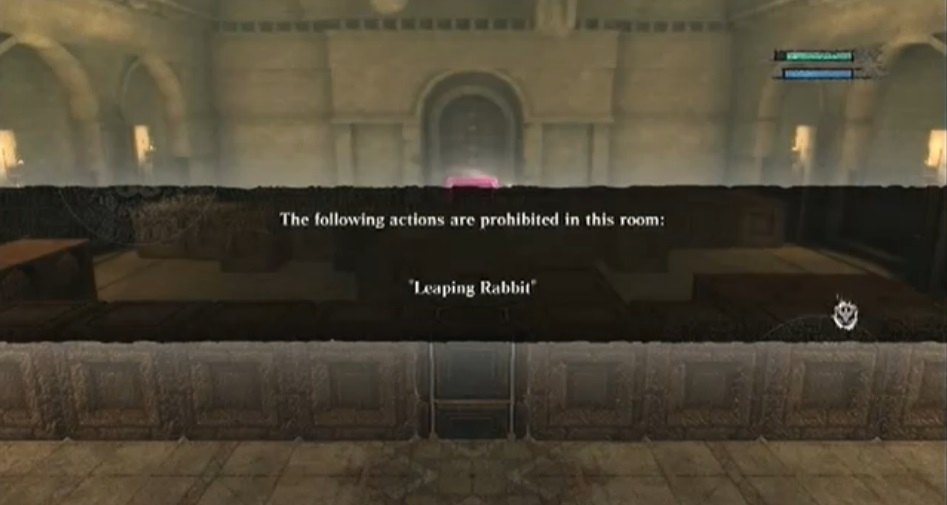 I want to make it clear that I do not hate Nier. What I hate are the parts that hold it back from being as unique as it deserves to be.

I would not be surprised to discover the story for Nier was conceived long before the game built around it. There’s a genuine love I feel in Nier for the characters and the world they inhabit, but after running across the world map for the hundredth time I started to wonder where that love went. Nier could’ve been half the length and twice as good. It’d be much easier to recommend to others as well. Still, I’m glad a game as brimming with creativity as Nier was allowed to be produced and sold, and I’m glad I discovered it.

If you’re looking for something off the beaten path, and you’re prepared to deal with some monotonous sequences, you can’t go wrong with Nier. If you can’t stand fetch quests though, you absolutely can go wrong, and that’s a shame. 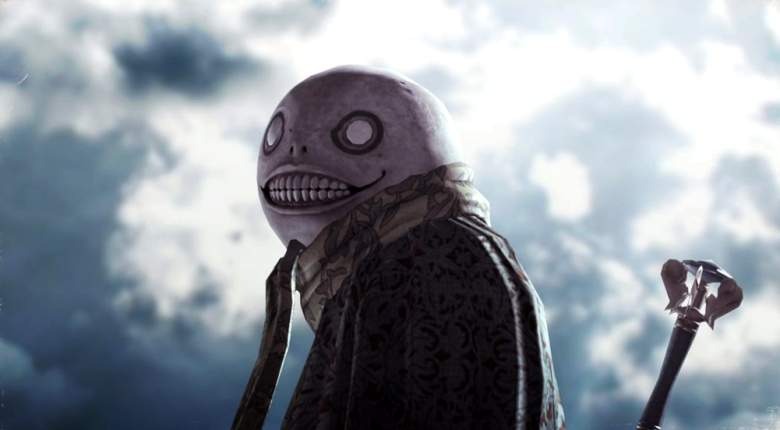 Only in Nier would this be the face of an Ally.