Redactem may not be much of a looker, but looks ain't everything. If you're willing to forgive its blemishes, Redactem delivers clever puzzles that force you to think smarter.

Note: Developer Elliott Marc Jones provided us with a review code for Redactem, making us feel like a real review site. A big thanks to the EMJ team for trusting us to fairly review their game.

A large number of indie platformers hit the steam storefront every day, so many that at a cursory glance, I’d be hard-pressed to tell any apart. While I appreciate how steam greenlight has allowed many developers a path to direct publication, I hesitate to call it a complete success. Don’t get me wrong, I’d rather have a Steam with Greenlight than without, but it does clog the storefront with a litany of pixel art platformers.

When I first looked at screenshots of Redactem after being sent a review code, I mistakenly assumed it was another indie platformer wading into a sea populated by countless similar games. 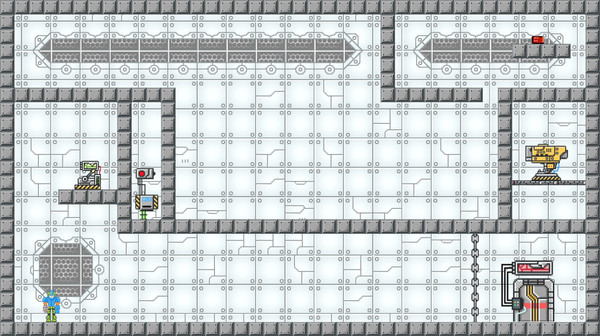 Then I played it, and realized still screenshots don’t do Redactem justice.

Sure, I make it look easy, but this is attempt six.

Redactem is a Puzzle Platformer from Elliott Marc Jones, emphasis on the puzzle. While the visual design may not help it stand out in the crowd, Redactem’s clever combination of platforming and puzzles exceed the mean and medium of the steam indie title range.

Mechanically, Redactem is one part VVVVV, one part Super Meat Boy, and just a dash of Braid. While Redactem lacks the production value of those three titles, these influences come together to make something new, smart, fast-paced, and maybe a tad frustrating.

The tutorial world teaches the player each mechanic one piece at a time. In addition to the expected amounts of running, jumping, and sprinting, there’s also gravity swapping, a la VVVVV...

I’m screwing this puzzle up. You’ll find out how later.

The gravity swap affects keys as well, which are needed to open doors. As you may have noticed in the second image, learning how to use the gravity swap to manipulate (or more importantly, not manipulate) keys becomes an essential tool later.

There’s also wall jumping a la Super Meat Boy, Mega Man X, and... well, many others. If you're reading a gaming blog, I bet you've wall-kicked in a game at some point in your life.

Something to be aware of -- The wall jump works a little differently than you might expect. You’re still very much in control of your momentum during a wall jump, so no mashing the button to chain kicks like in N+. Instead, holding left or right will extend or slow your speed, granting you slight control of your fall arc. It also means if you're kicking your way up two surfaces, you'll need to hold towards the next wall between jumps to maximize distance.

Because many puzzles in Redactem are designed around controlling your momentum through deadly gaps, I can see why Mr. Redactor here doesn’t just leap a preset distance and speed. When you're trying to get a feel for how it works, though, it does lead to situations like this:

Until you get a feel for it.

As for the small dash of Braid, There's a rewind button.

It’s worth noting this is not like the famous Prince of Persia rewind -- you aren’t likely to save yourself from death, not unless you have superhuman reflexes or clarivoyance. Instead, rewind allows the player to travel back to previous positions, but with the state of the level unchanged. Like when a gate blocks the exit, for example.

With so many tools at your disposal, it may seem like a breeze to navigate around whatever puzzles Redactem has in store. Saws? Lazers? Pshhh. Whatever, right? Well, there's few clever ways Redactem limits your choices in a given situation.

For example, remember how gravity affects the key? Despite a tutorial warning against this very thing, I still flipped gravity and banished a key to the heavens in the first stage.

By placing the key here, the player’s forced to time jumps around these massive saw blades, instead of using the gravity swap to skip them.

There’s also missiles to dodge, but these rockets serve an important secondary function, too. Takin’ down walls.

As long as you can dodge ‘em, anyway.

If you haven’t figured it out by now, Redactem also wears the previously mentioned influences on its sleeve by killing you. A lot. We’re talkin’ a Redactor meat factory here. Thankfully, the game restarts the stage on death, so you won’t have to wait long between attempts. With enough tries, you’ll finally nail the perfect run.

Or you can throw yourself into another saw blade like me.

My favorite times in Redactem were the “ah-ha!” moments I had when looking at a problem from another angle. When going through the capture footage, I could actually see these revelations taking place in real time. It was an awesome experience -- twice.

For example, here’s me trying to delicately fall past saw blades.

Yeah, not so much.

After tossing myself into the meat harvesters a couple times, the realization hits -- maybe I’m doing something wrong.

And there it is. The "ah-ha!" The stage is still a challenge, mind you, a brutal one, but because of some experimentation I’ve found an easier way to tackle the problem.

Here’s another one where I spent ten minutes trying to delicately fall up between saw blades, then leap into another “safe” location between the adjacent saws.

After countless deaths, my wife asked a simple question while watching over my shoulder -- “Can’t you just wall jump it?”

That’s a hard line to draw in puzzle platformers, I think, crafting a scenario where the player has an opportunity to feel clever without also feeling like they were denied information, or worse, if the trick makes the rest of the stage trivial. In Redactem, once you figure out the trick, there’s still challenge in the execution.

It’s here where I have to get into my criticisms of Redactem. The most obvious one, I think, is the presentation. I feel comfortable saying the focus during Redactem’s development was likely on mechanics and not style, as nothing evolves or changes visually from beginning to end. The backgrounds remain the same white and gray tileset, with gray blocks making up the walls of every stage. 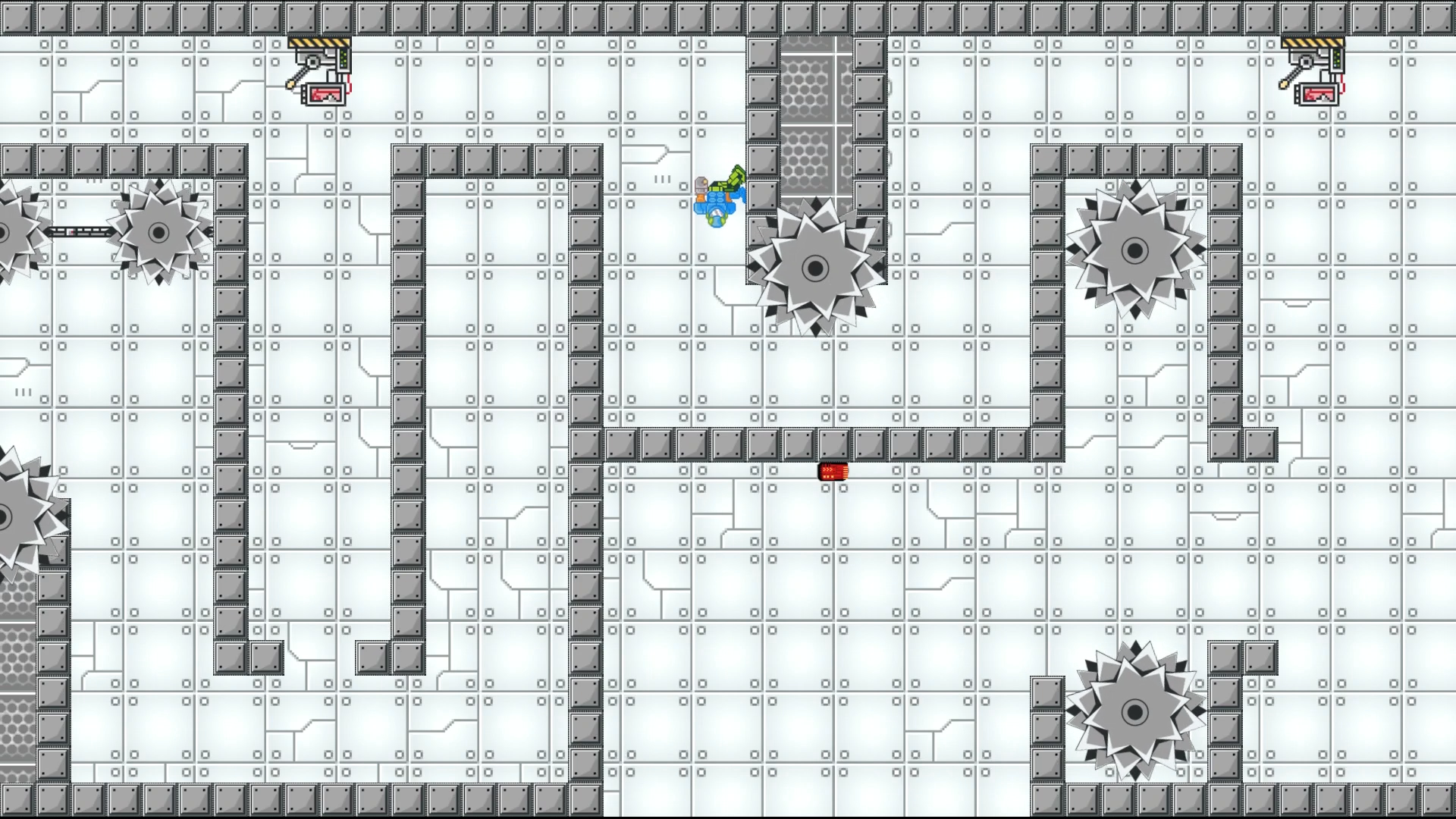 The world is bland and bleak, but it does help other elements stand out. The only objects with color in a given stage are the player sprite, door, door keys, lasers, missile launchers, and breakable walls -- basically, all things that ought to grab your attention first. This doesn't totally help with the extremely muted color pallete, but I can see the intent.

The same applies to the music and sound design. The sound effects for each device and power are serviceable, and communicate the quick information they need to (my personal favorite is the “gravity swap” sound effect). I certainly wouldn’t call the music bad -- the title screen tune stands out to me as a notch above the rest -- but let's just say I won't be looking for a Redactem soundtrack after this.

One small annoyance I have to mention -- Remember how I praised the quick reset after death? While I do love how quickly the reset happens, the way the music starts from the top every time is jarring. It's not so bad at first, but when you've died thirteen times on the same saw, it starts to grate on your psyche.

Remember -- each time I die here, the song resets too.

Finally, the main complaint I have about Redactem is the length. It took me under two hours to complete Redactem. Including the tutorial, there’s currently twenty-four stages in total. The last world at the time of review, Scalium, marks a steep and much needed difficulty increase, but I still couldn’t help but feel it all wraps up too soon. In most platformers, the final series of puzzles often combines every obstacle the player has learned to circumvent. While Redactem’s last few puzzles aren't easy, they lack the "compounding obstacle" effect that usually signals The End is approaching.

The good news is there’s more content on the way for Redactem, so I may someday get my wish for an impossibly hard level with a zillion, billion obstacles. In the meantime, EMJ has been squashing bugs and answering questions on the community page, which shows a lot of promise for Redactem’s future.

If you’re reading this in the far off year of 2017 or beyond, first, I'm glad to know 2016 didn't destroy the world. And second, there’s a good chance there are more levels in Redactem than there were at the time of this review.

The biggest reason I overlook many of Redactem's blemishes is the price point. It retails for $3.99, which makes a lack of polish much more forgivable. It's also currently discounted at a lower rate elsewhere, which I've listed at the end of this article.

Redactem has some flaws, but it’s hard to be upset when the game costs pocket change.

In the deluge of indie titles on Steam, I’ve played many similar games being sold at far higher price points with less heart and creativity. Redactem is rough around the edges -- some edges rougher than others -- but the strength of its core concept saves it from a sea of mediocrity.

Redactem is a clever and sharp puzzle platformer that stands out above many other budget titles in the Steam storefront. It won't be the greatest game you play this year, or make any game of the year lists, but it’s a strong debut title worth the experience for its price. If you're a fan of puzzle platformers, $3.99 is a small price to pay for a smattering of well crafted puzzles, tricky wall jumps, and gravity-bending problem solving.

And finally, if the concept has your attention but the current offerings looks too slim for $3.99, check back in the near future.

I look forward to seeing what else Elliott Marc Jones has in store for us, both in Redactem and in his future projects.