Resident Evil 3 (2020) conjured up similar feelings as the 1999 version of the same name. That is to say, a decent sequel to a fantastic game that overshadows it completely.

Resident Evil 2 hit the scene hard twice now. In 1998, it followed up the original smash hit with a new setting now iconic to the series. In 2019, a remake seemed to come out of nowhere and take the world by storm, offering a new, modern way to escape Racoon City.

While Resident Evil 3 (1999) is fondly remembered for its antagonist, Nemesis, much of the game felt like a slight retread. Many similar weapons and areas from Resident Evil 2 (1998) appear. There’s nothing inherently wrong with this — Jill is running around the same city, after all, so it makes sense she’d encounter similar locales — but Resident Evil 3 (1999)'s shorter play time and reused assets always made it feel like an action-oriented side adventure, rather than a proper sequel. 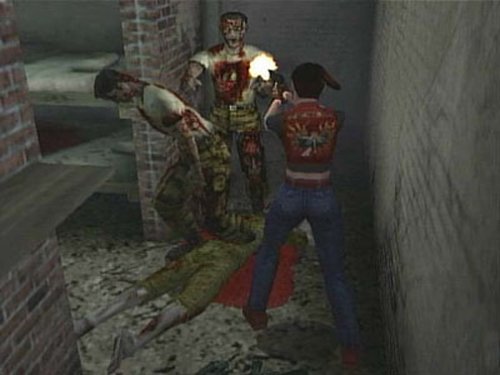 For better or worse, the 2020 remake gives me the same impression. It’s a short, action-packed adventure through the streets of Raccoon City, but does little else to impress.

Make no mistake, by no means is either version of Resident Evil 3 a bad game, but both fail to achieve the same high standard their predecessors set. Let’s talk about why.

Let’s compare the opening tones of each game.

In Resident Evil 2, whichever character you choose arrives at a mysteriously abandoned gas station. They get out of their vehicle and set foot inside the pitch black stop, armed with only a handgun and a flashlight. 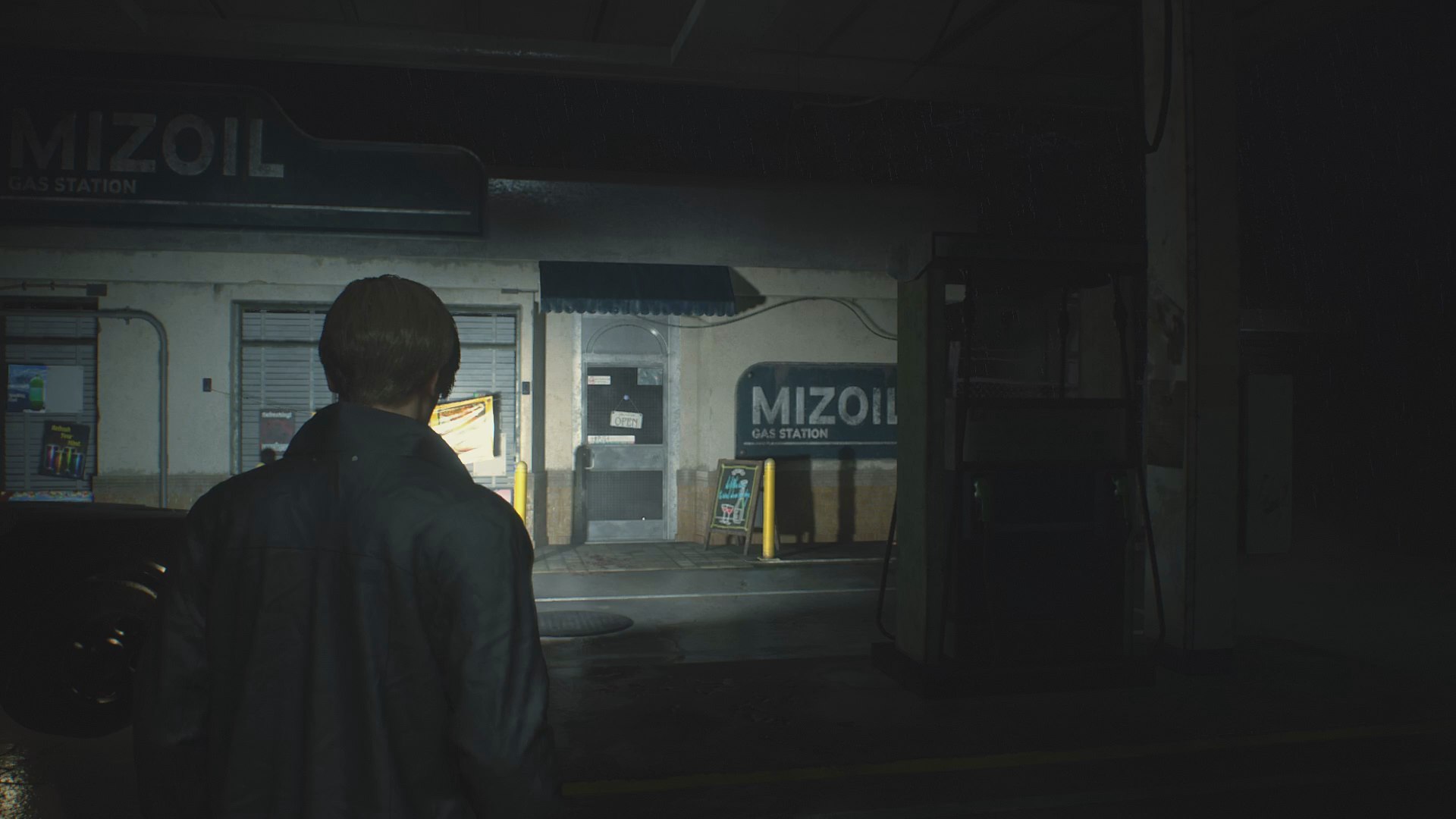 In putting the agency entirely in the player’s hands, the game establishes a tone of atmospheric horror. Something could pop out at any time, but it’s up to you to brave the darkness, take the steps. Later Resident Evil 2 puts pressure on you in the form of Mr. X, but he doesn't make his first appearance until you've had time to explore the RCPD of your own accord. (In fact, in Resident Evil 2 (1998), Mr. X didn't show up until your 2nd scenario run. The first character you played as wouldn't even see him.)

Meanwhile, over in Resident Evil 3, Jill’s just chilling at home plotting Umbrella's downfall when this guy bursts through the wall like the Kool-Aid man. 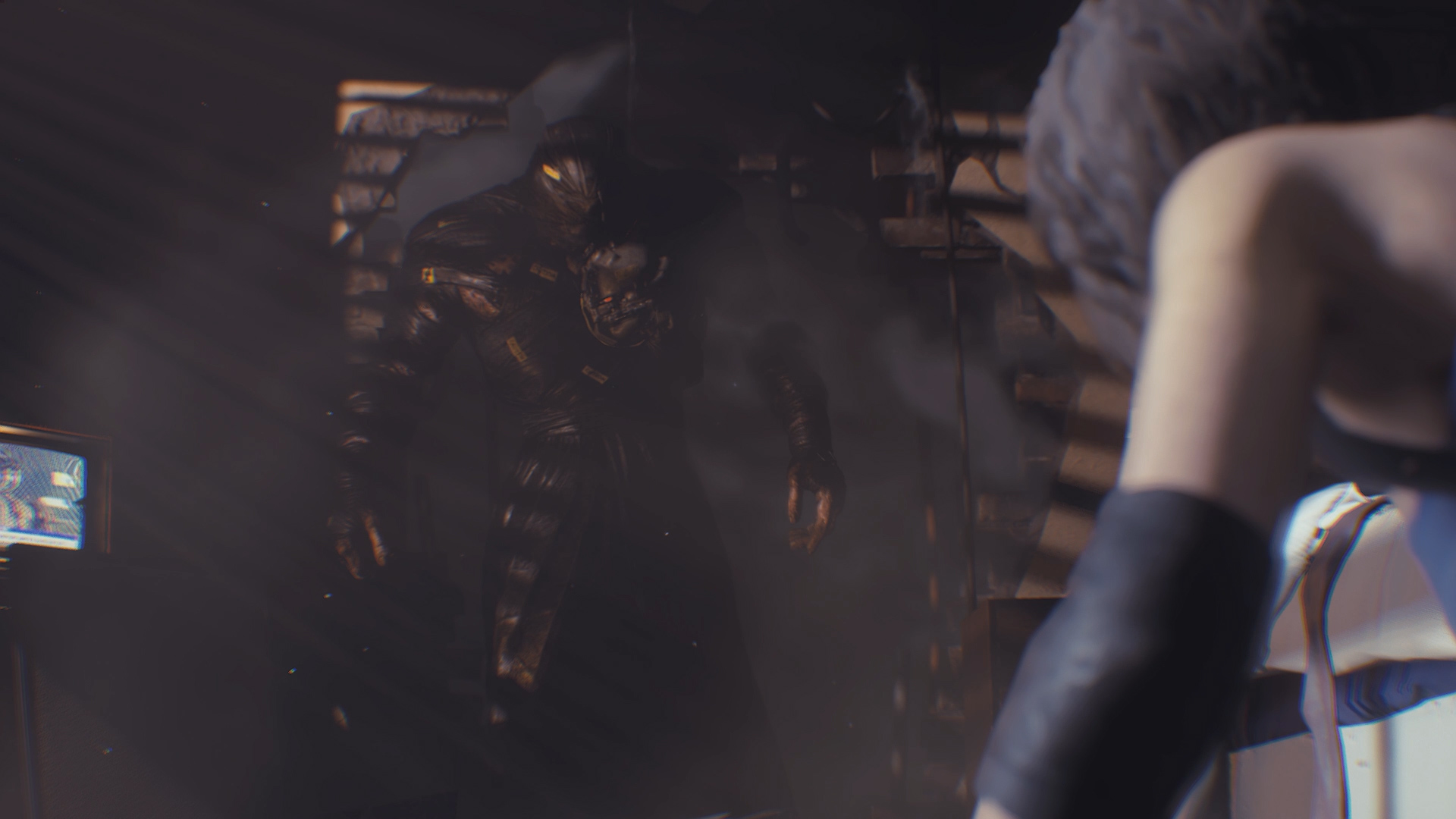 From there, it’s a pulse-pounding chase sequence through Jill's collapsing apartment complex, as Nemesis rips apart every inch of brick and drywall.

Resident Evil 3 establishes a completely different kind of tension, one driven by a relentless hunter rather than atmosphere. This jackass hounds you the entire game, and his various transformations make up every boss fight.

Like the original, it’s possible to take down Nemesis before these boss encounters to net special gear and items. You’ll still have to fight him again later, though.

There are sections of Resident Evil 3 (2020) that slow down and let you explore a space of Raccoon City, welcome moments of reprieve after each chase concludes. It creates a good contrast of experiences, but when another adrenaline-fueled sprint looms after each break, it makes exploring these spaces far less tense on their own.

The mechanics have also been altered to make Jill far more combat-ready than Claire and Leon, which goes a long way to blunting the edge of horror. Similar to Resident Evil 3 (1999), Jill has a quick dodge now, a shuffle-step of sorts she can use to quickly maneuver. Time it perfectly, and Jill will do a full-on combat roll to evade grabs and attacks. While I appreciate the high risk, high reward aspect of this emergency button, mastering this technique greatly diminishes the tension in every situation. What would be a nightmare scenario in Resident Evil 2 (2019) becomes an easily navigable horde in one or two dodge rolls, assuming you get the timing down. This works on everything, including Nemesis and his wild swings and grabs.

When the screen flashes white, you’ve nailed the dodge.

It's also worth mentioning the grab escapes from Resident Evil 2 (2019) have been cut. Grenades and knives can no longer be used as emergency tools, likely to account for Jill's aptitude for escaping grabs on her own. The good news is your knife is indestructible once more, so you can use it to stab downed zombies and break boxes without wasting precious ammo.

I will say, I appreciate how Jill's characterization reflects these new battle-hardened mechanics. She does a fair amount of screaming, like one does when an invincible Biological Death Machine wants you dead, but she's a capable combatant who's seen shit before.

And she doesn't suffer idiots treating her as anything else. 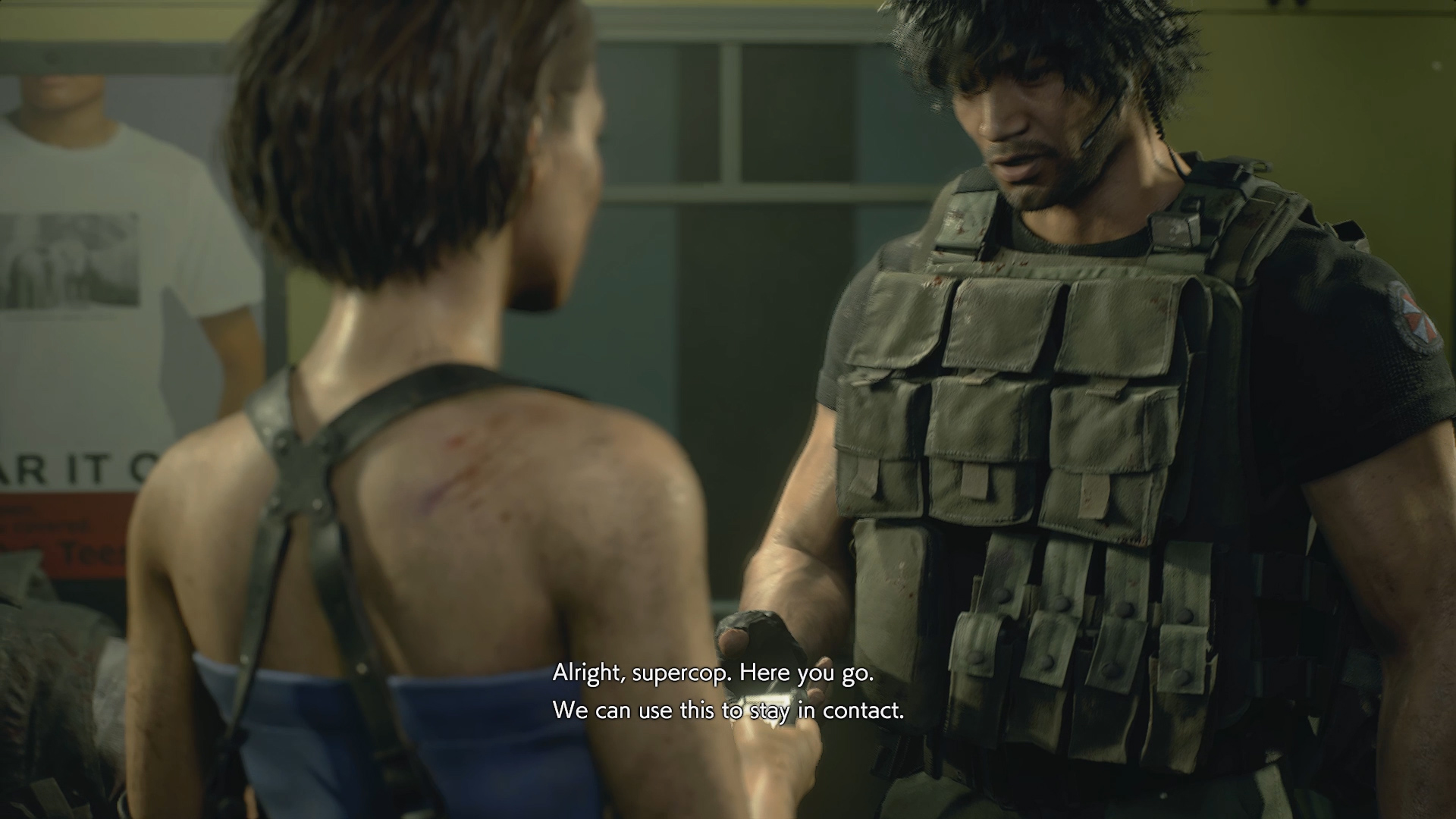 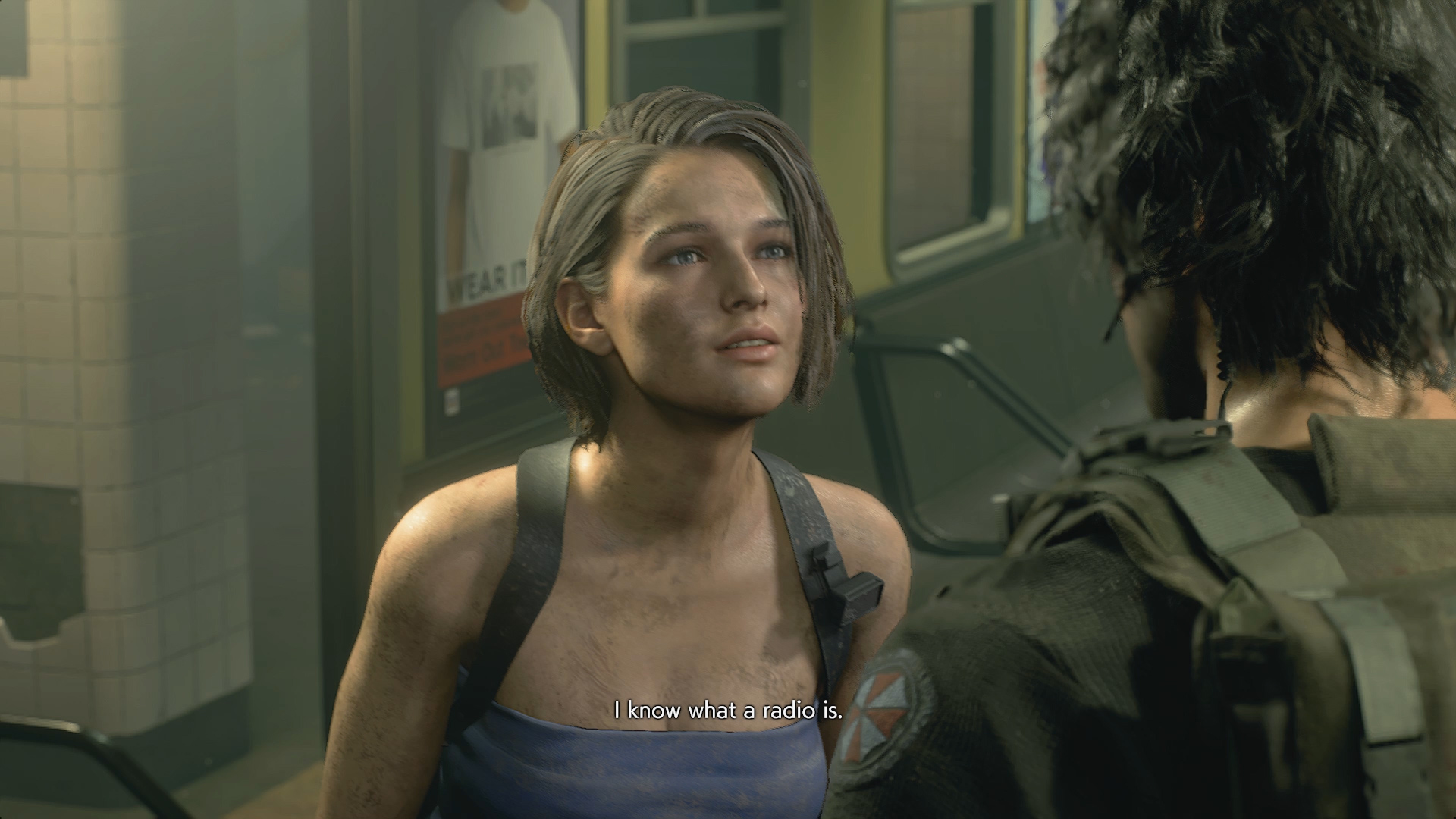 If somehow you weren’t getting this was a more action-oriented experience by the halfway mark, Carlos’s sections as a playable character beat you over the head with it. This musclebound U.B.C.S. soldier assault-rifles his way through zombies and lickers like a paper shredder. Even his dodge gets replaced with a shoulder check instead. When perfectly timed, it becomes a wild haymaker punch. The game’s just telling you “get in their face!” at this point. 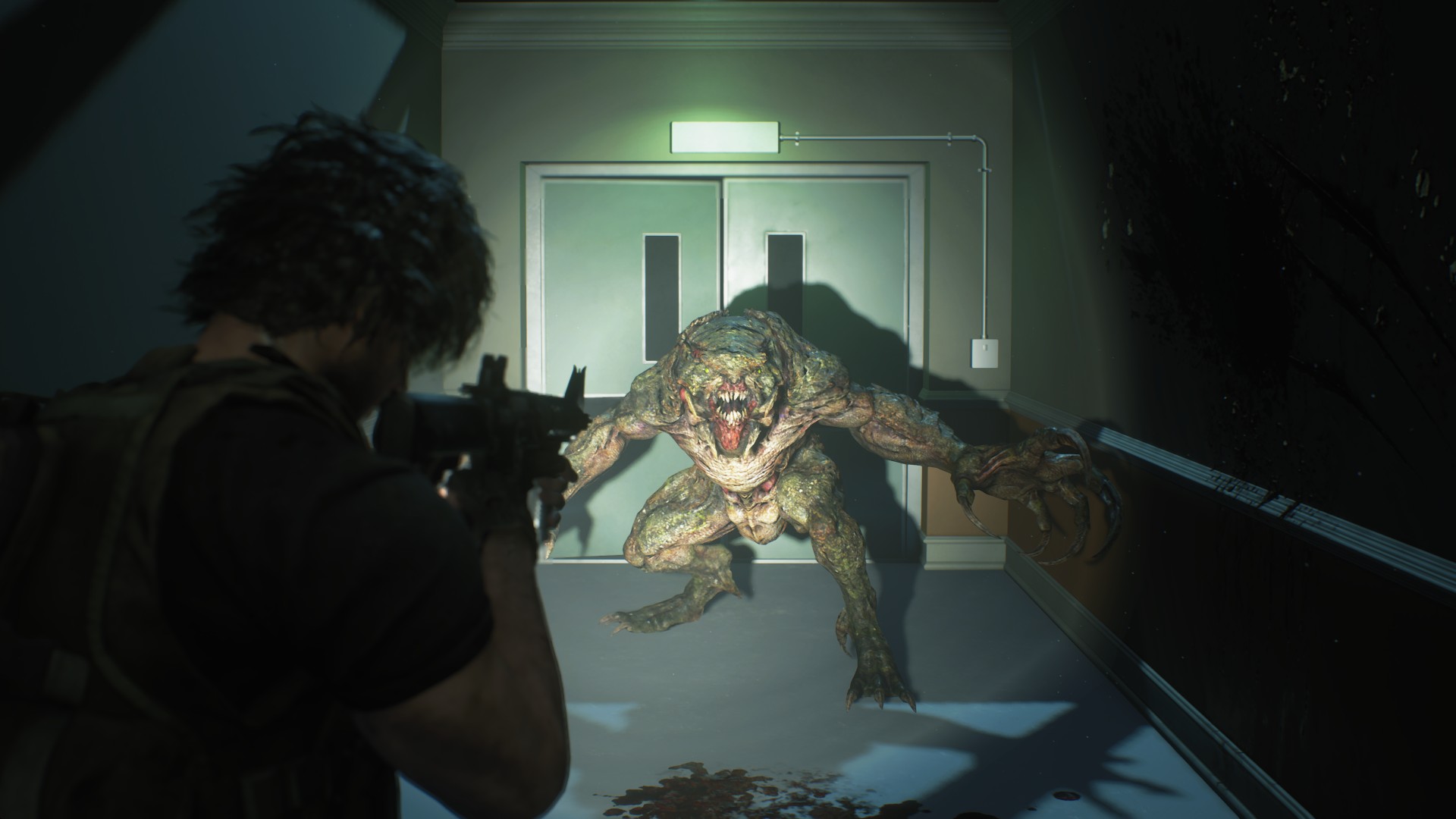 I appreciate the Hunters being here, but screw their instant death attacks.

To be clear, I don't think these changes are inherently bad, but they will disappoint anyone hoping for more survival horror after Resident Evil 2 (2019).

This is an odd one, because not only does it fly in the face of Resident Evil 2 (2019), but defies the original Resident Evil 3 model as well.

Back in the 1999 version, Jill made choices at particular junctures that would influence the outcome of the story. This helped make additional playthroughs worthwhile, as there would be something new to see next time around. It was nowhere near as extensive as Resident Evil 2’s multiple characters and scenarios, but it served as an acceptable substitute, and gave players something more to do than simply shoot for a faster time. 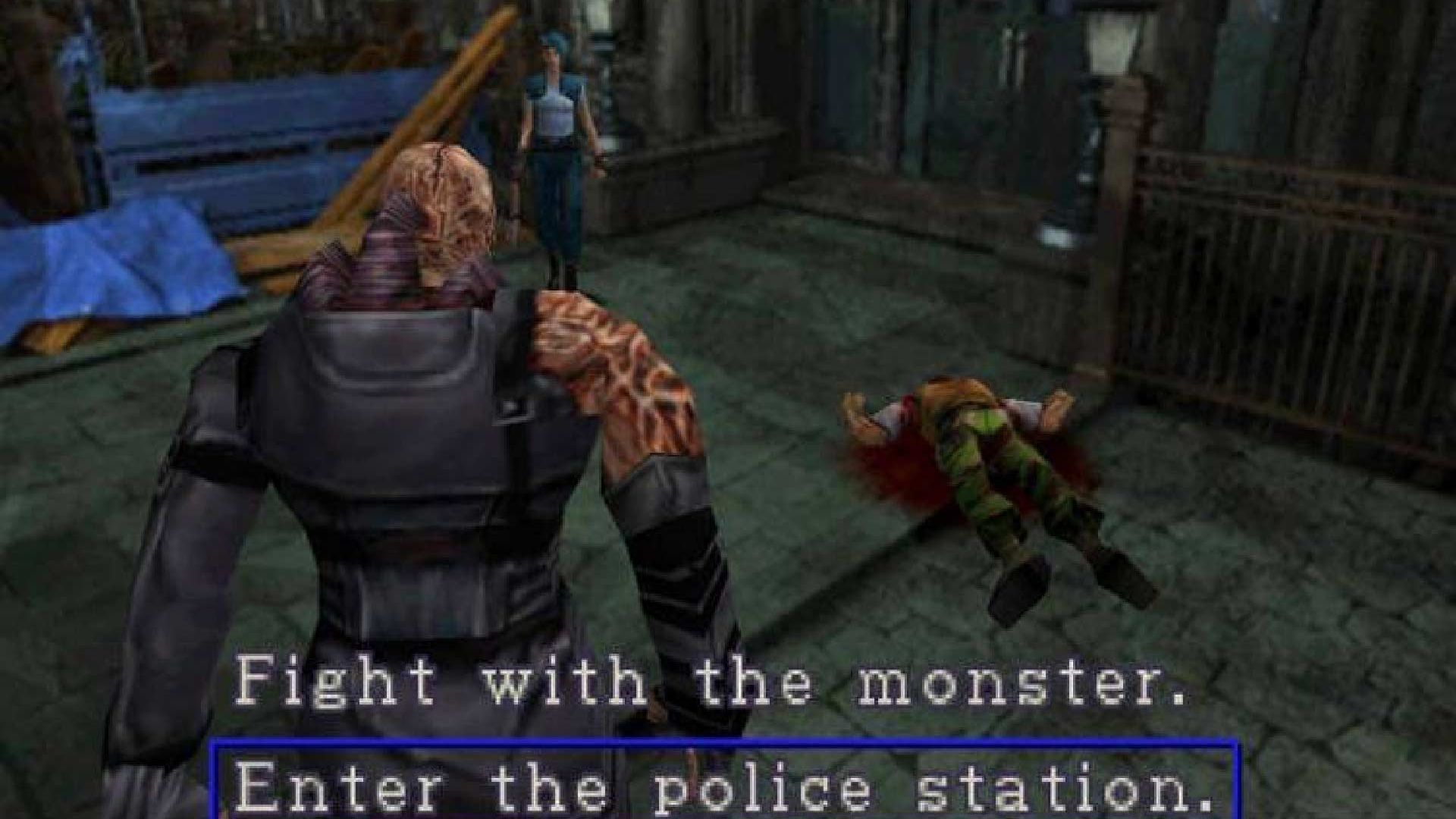 These choices determined who survived the night and where Jill went next in Raccoon City. You won’t find them here, though.

Resident Evil 3 (2020) does away with all of that. There is one path, one set of objectives, one set of gear. Once you’ve seen the story, collected all the weapons and attachments, that’s it. Nothin’ else to it. Hopefully you’re eager to jump into a harder difficulty after this, because otherwise the whole experience is likely to take you under five hours.

Curiouser still, while Resident Evil 2 (2019) included all the original game’s bonus modes and more, this one includes none. The original appearance of The Mercenaries happened in the 1999 release, a ubiquitous bonus mode which became a staple of later sequels. There’s no sign of a side adventure with the U.B.C.S. soldiers here at all. If Resident Evil 3 (2020) were the first remake produced in this new line of Resident Evil’s this would be less surprising, but Resident Evil 2 (2019) included every bonus mode and then some. Heck, they even added more challenge scenarios later in the year for free. 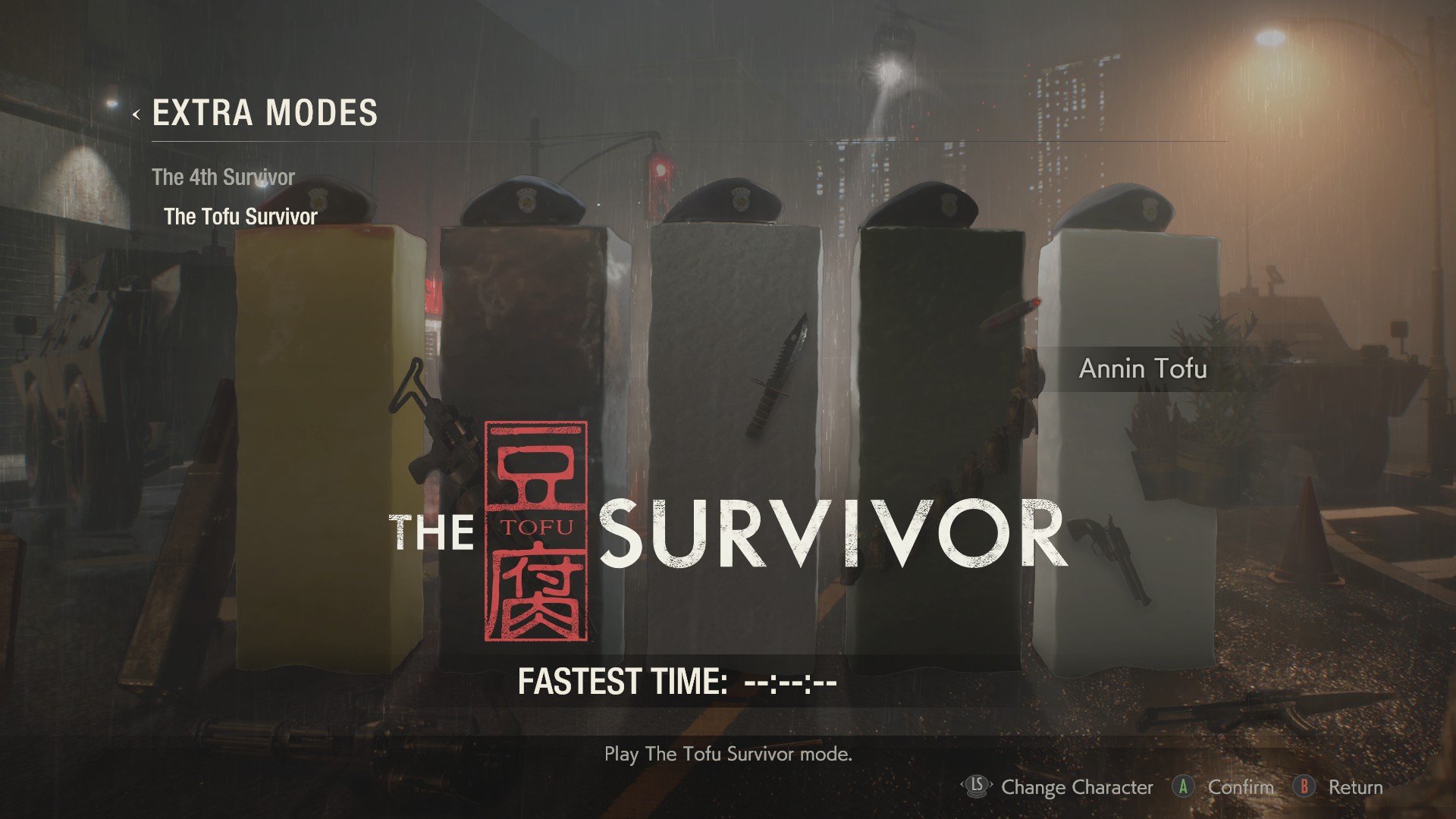 The closest thing here to replayability is an unlockable difficulty called Nightmare, where enemy and weapon spawns are randomized. At the time of writing I’m still working my way through hardcore mode, and I question if I'll have the motivation to power through just for Nightmare difficulty alone. Which brings me to point three... 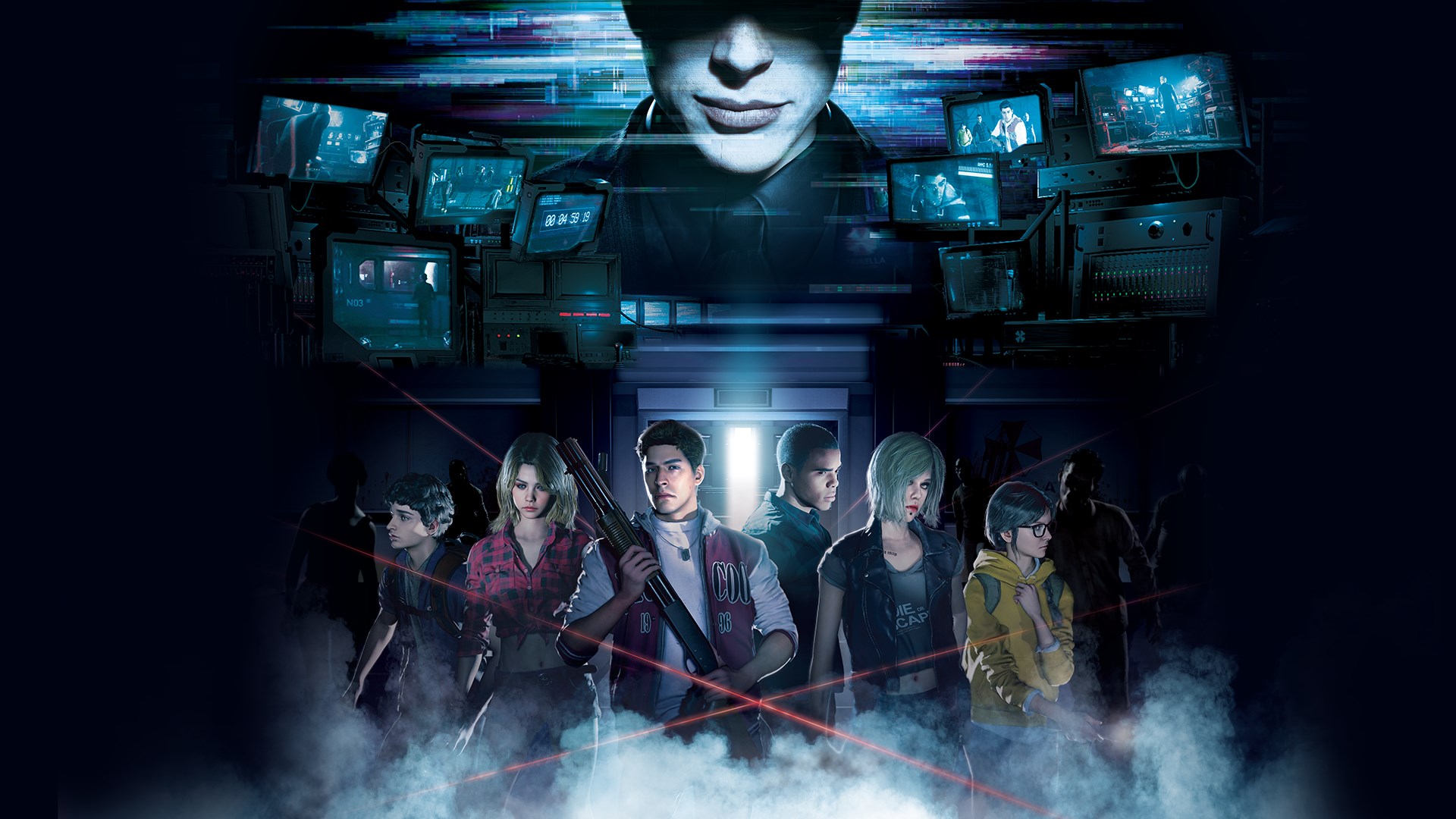 Resident Evil: Resistance is probably why we did not get additional single player modes or scenarios, if I had to guess. Development time and resources likely went here instead.

Here’s how it works — matches are one-versus-four affairs, where one player takes the role of a Mastermind, setting off traps and zombie hordes from a mysterious undisclosed room somewhere. The other four are survivors trying to escape. 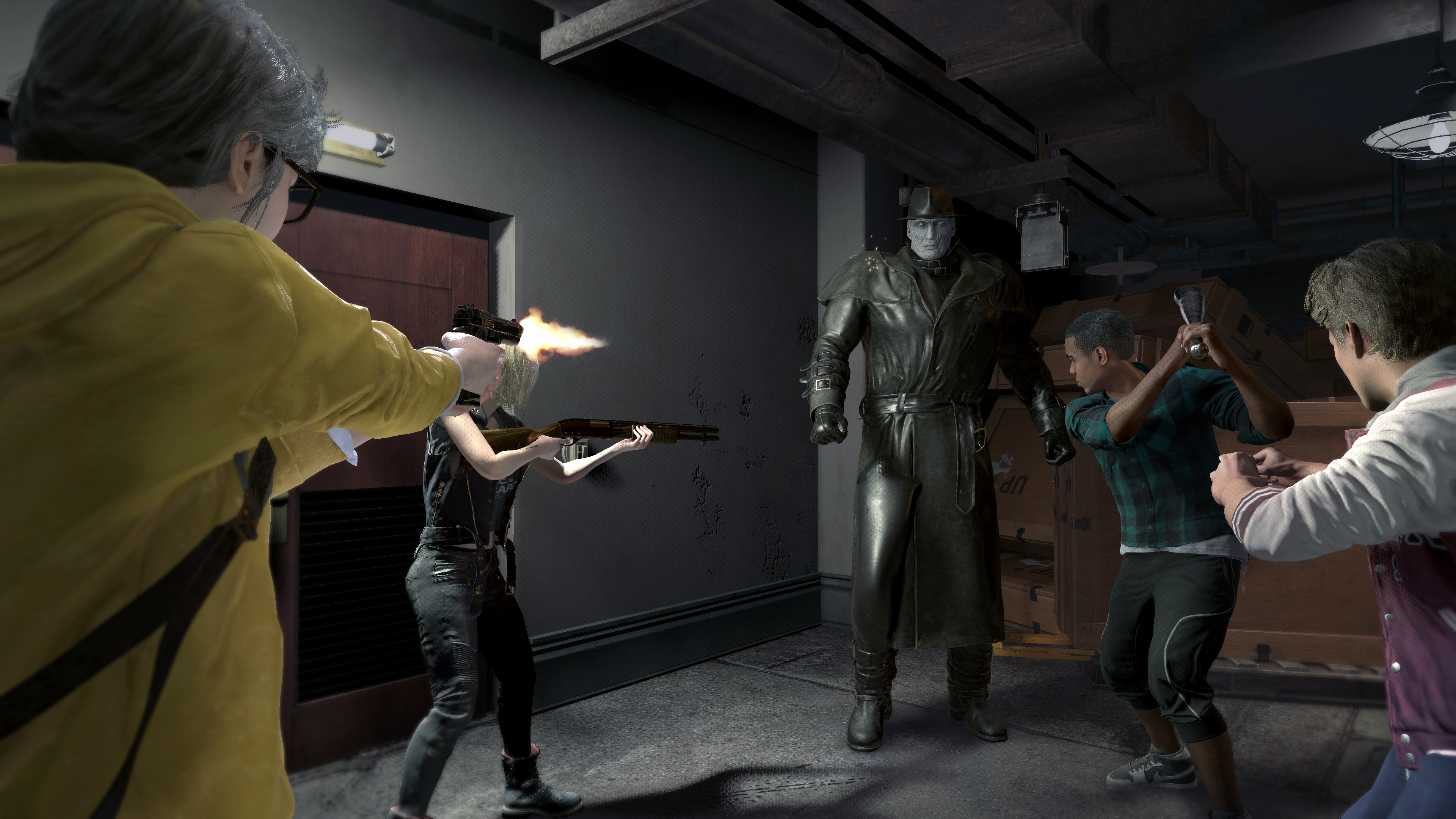 Resident Evil 2’s Mr. X is at the Mastermind’s command.

You choose which character to play as, and they each have their own special tools and skills to assist the team. Where you’ll either love or hate this thing is the way it handles scoring. Sure, if all four survivors die it’s game over, but there’s also a time limit in constant fluctuation. Get bit by a zombie? You just cost your team five seconds. Did you kill one? Add five seconds. The time limit alters like this based on the successes and failures of the team, and it feels like it rarely tallies up in your favor. 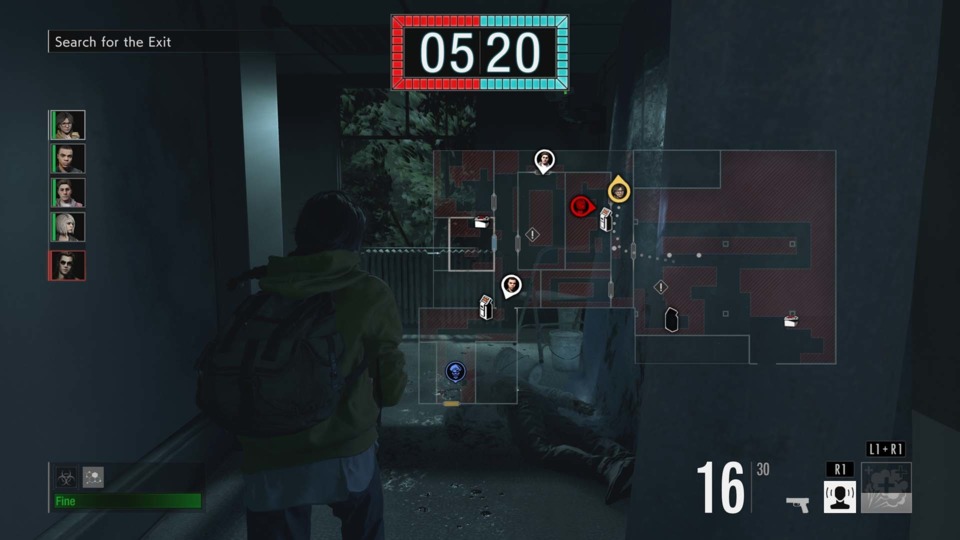 See those big numbers at the top? With all the zombies, monsters, and traps, I find the additional time constraints a profoundly annoying extra layer.

After playing a few matches, I can at least say this is a notable improvement over previous Resident Evil online games. Some aspects are actually impressive... when they work. Where I become extremely concerned about its staying power is the reliability and support of the thing. Connection issues are already abundant, but layer onto that the obnoxious loot boxes and slow unlock progression in a mode that barely justifies either, and I’m already barely engaging with it.

With some fairly minor adjustments, this mode could have a lot of potential, and perhaps make up for the core game’s shortcomings. As it stands now though, it’s little more than a fun diversion. Parts of this thing feel very greedy, like the business models for additional monetization strategies were put in place before the game. Rarely a winning formula. 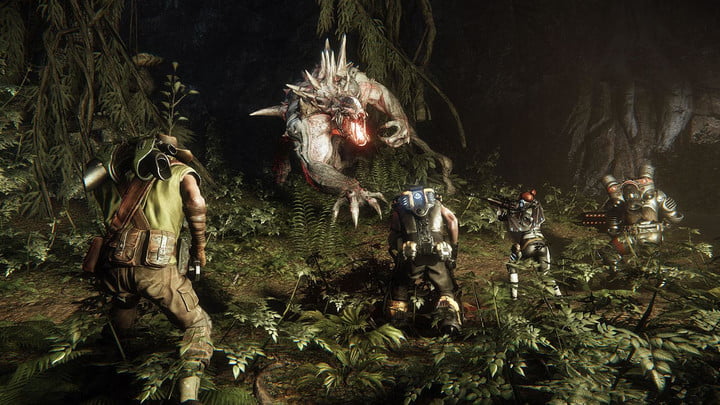 Huh, how’d this picture of Evolve get here? Weird.

In short, I see a lot of promise to capitalize on in Resistance, but worry Capcom would rather capitalize on your wallet. If in the future I'm proven wrong, maybe I'll return with a full Resistance article and eat my words. 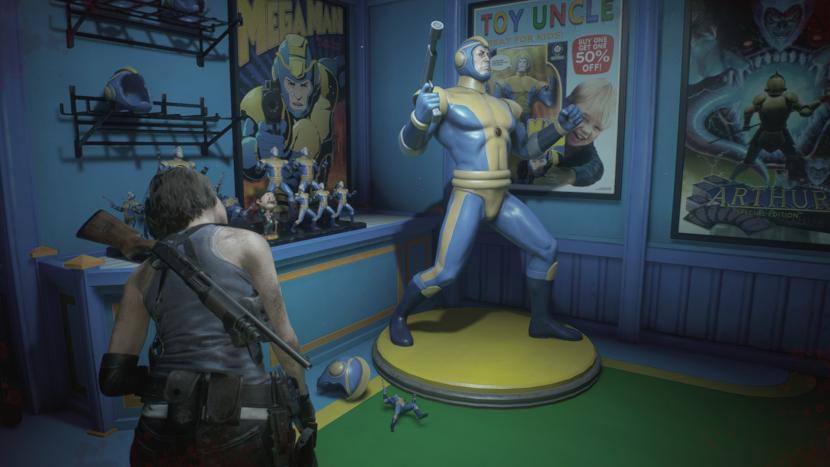 My advice? If you haven’t played either modern Resident Evil yet and are looking for the superior survival horror experience — especially something you may only play once or twice — pick Resident Evil 2. It’s far more comprehensive, full of different paths, stories, and weaponry. Not only that, but it has an extensive number of bonus modes to dig into once you’ve completed the main story as both characters.

Resident Evil 3 (2020)'s paltry additional offerings make it challenging to recommend as wholeheartedly. If the $60 price tag seems steep, I’m here to tell you those concerns are quite justified. And, if you have no plans to dig into Resistance, the offerings are even slimmer still.

If we’re lucky, Capcom will add more content to Resident Evil 3 (2020) in the near future, like they did for Resident Evil 2 (2019). For now, it’s hard to recommend this package to anyone other than die hard Resident Evil fans who’ll want to claim the Master of Lockpicking title.

For everyone else, keep an eye out and become the Master of Sale Purchases instead. 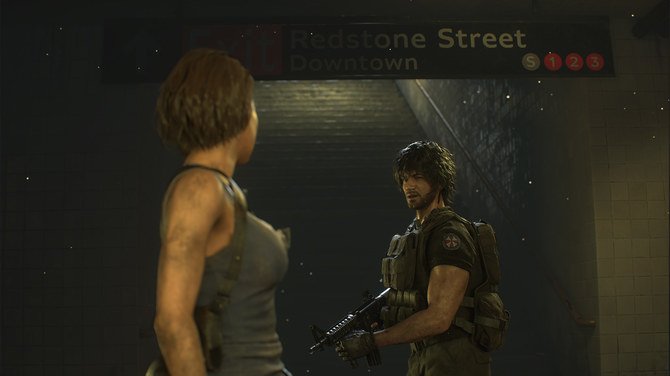 Good to see these two back in action. Resident Evil 3 is available on PC, Playstation 4, and Xbox One.