A brief romp into Them's Fightin' Herds revealed a multitude of fantastic surprises. Anyone who's counted this one out due to the cutesy aesthetic, it's time to reconsider.

In 2018, I wrote an article in preparation for EVO defining fighting game terminology, complete with visual aids and references.

This particular quote from the article has not aged well, folks.

I'd planned on updating this list for 2020, but if you haven’t heard, EVO is canceled this year. Super canceled. While upper management restructures and we (hopefully) get rid of all the sexual predators plaguing the scene, we can turn our attention to a game worthy of some praise.

When I saw the news Mane 6’s fighting game, Them’s Fightin' Herds, would be hosting their own tournament in lieu of a proper EVO appearance, I jumped in to get a feel for the game.

What I found is perhaps the most ingenious story mode for fighters I’ve seen. 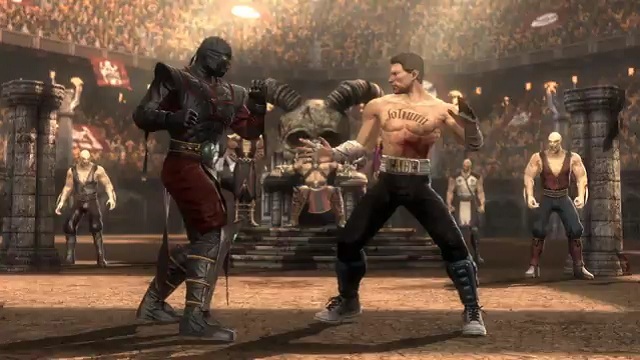 Okay, yes. Netherrealm has done an exceptional job making Story Mode not a joke in fighting games. But, while their stories excel in campy, delightful narratives, they still fail in one fundamental way every fighter’s story has since the concept came into existence.

They do not actually prepare you to play against other people.

Arc Systems has made some strides towards this in their recent entries, providing both tutorials and combo challenges. While these are helpful, I think Mane 6 has stepped it up to another, more edifying level.

Let's go on the journey together. 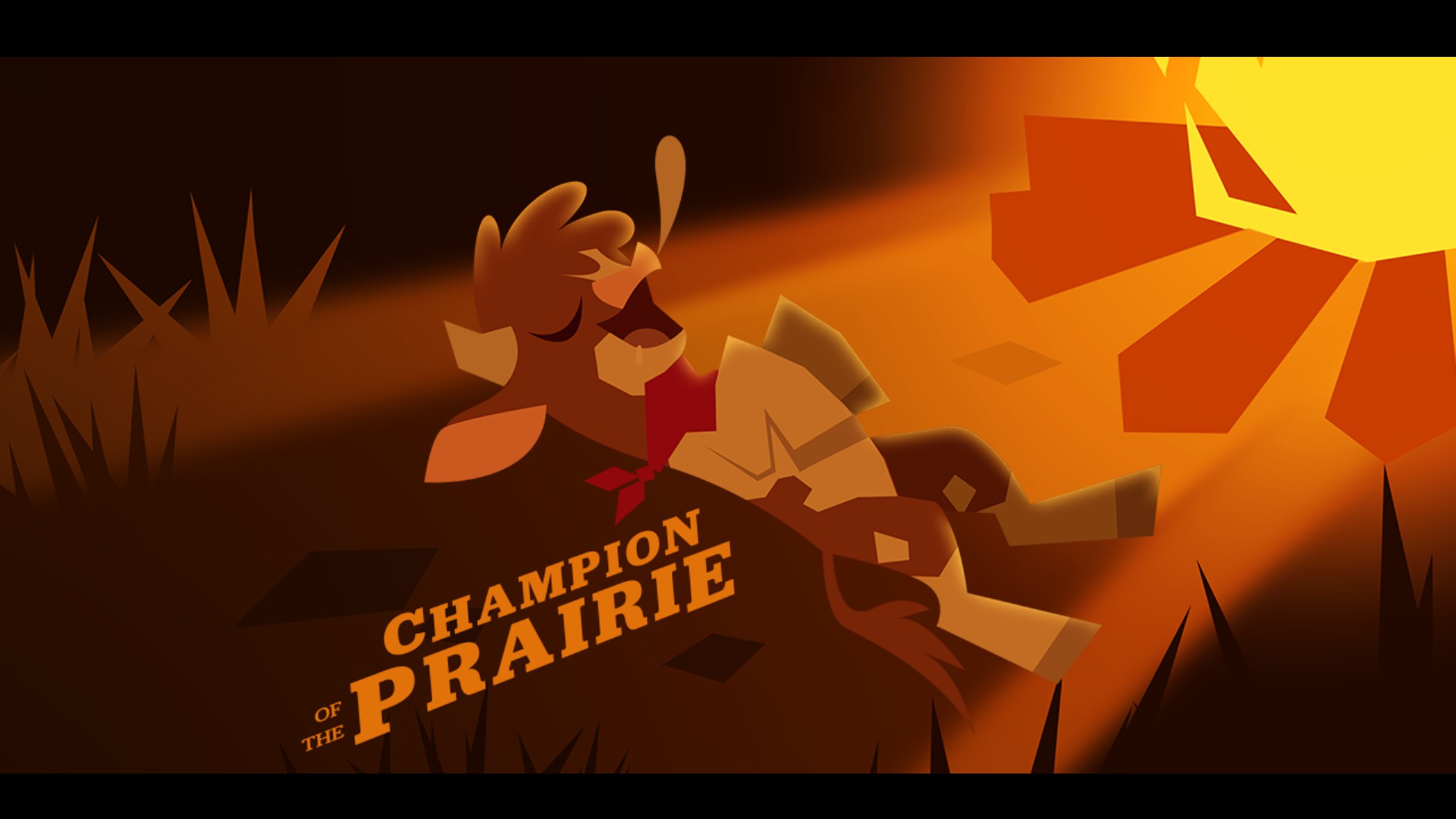 Them’s Fightin’ Herds opens with Arizona, a Colt who sets off for the big city. There’s been a call to assemble champions from all over the world to stop some ancient, rising evil, and she’s up to the task.

Here’s the first fun surprise — this game has a world map. 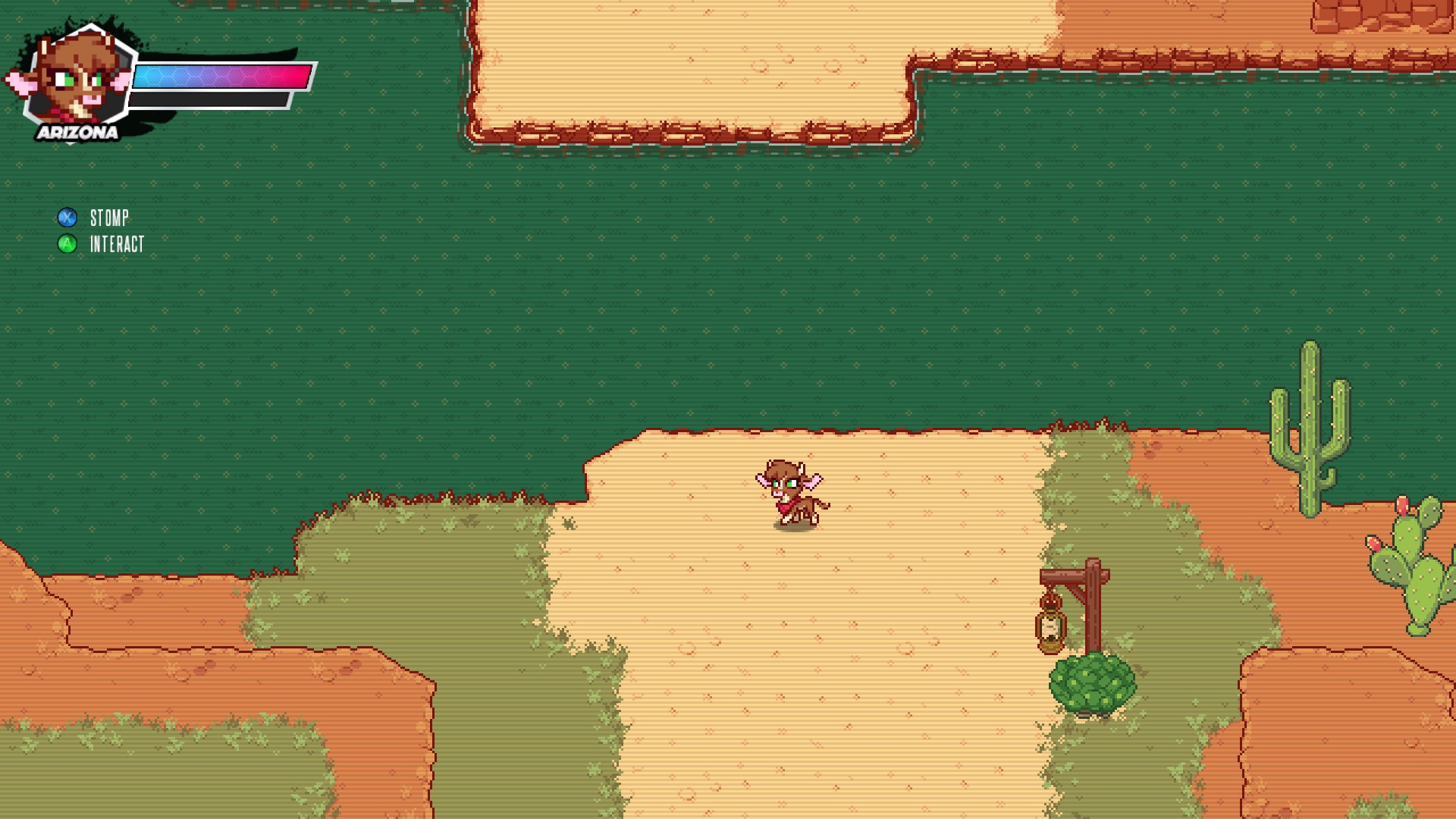 And it’s full of hats!

The first chasm in the way looks like this: 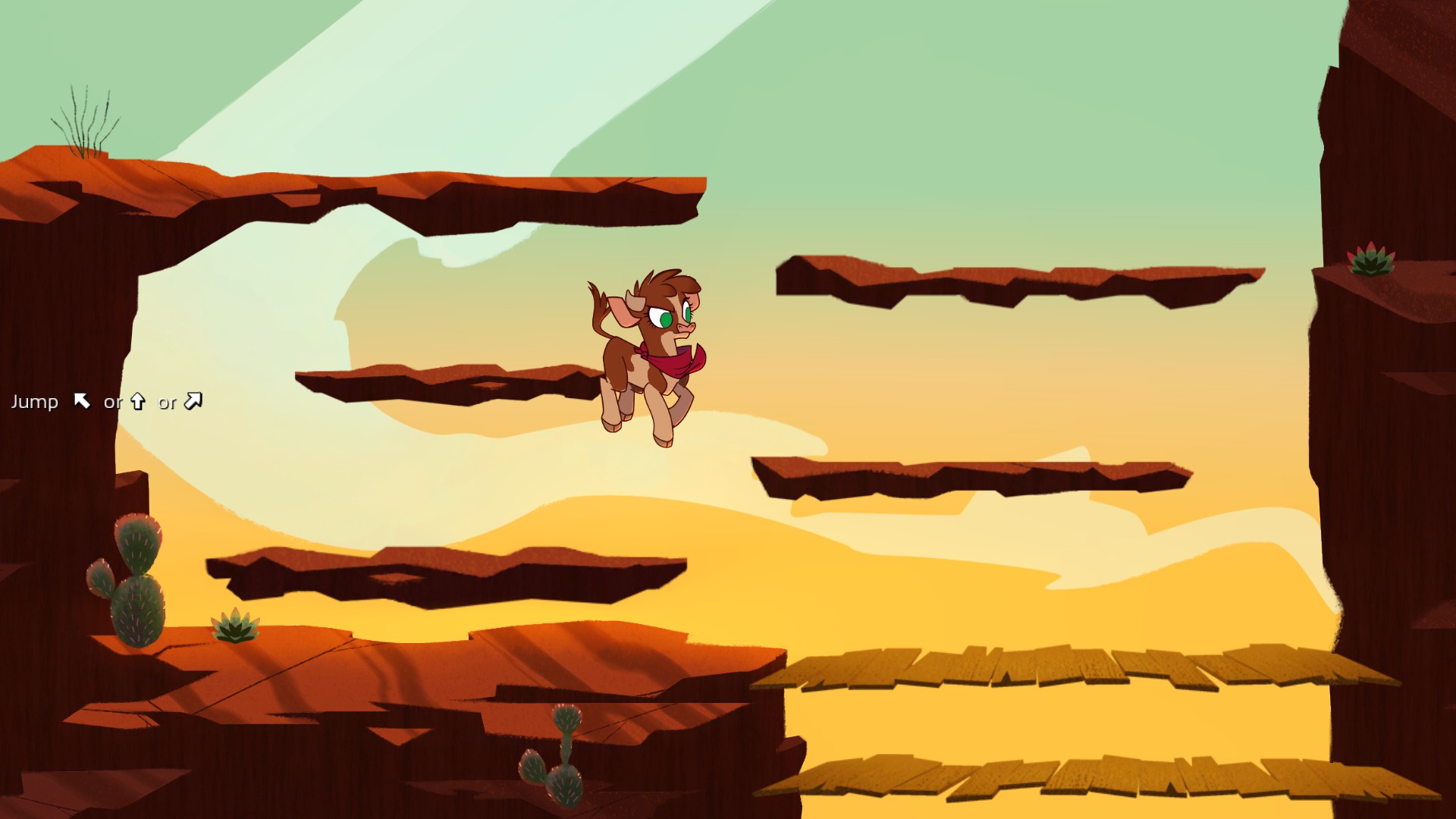 Here, the player learns all the different ways one can jump from a neutral position. Forward, back, and straight up. The platforms are positioned so you must use every direction multiple times to advance.

Next, you’re presented with sizeable gaps that can only be cleared with a super jump. 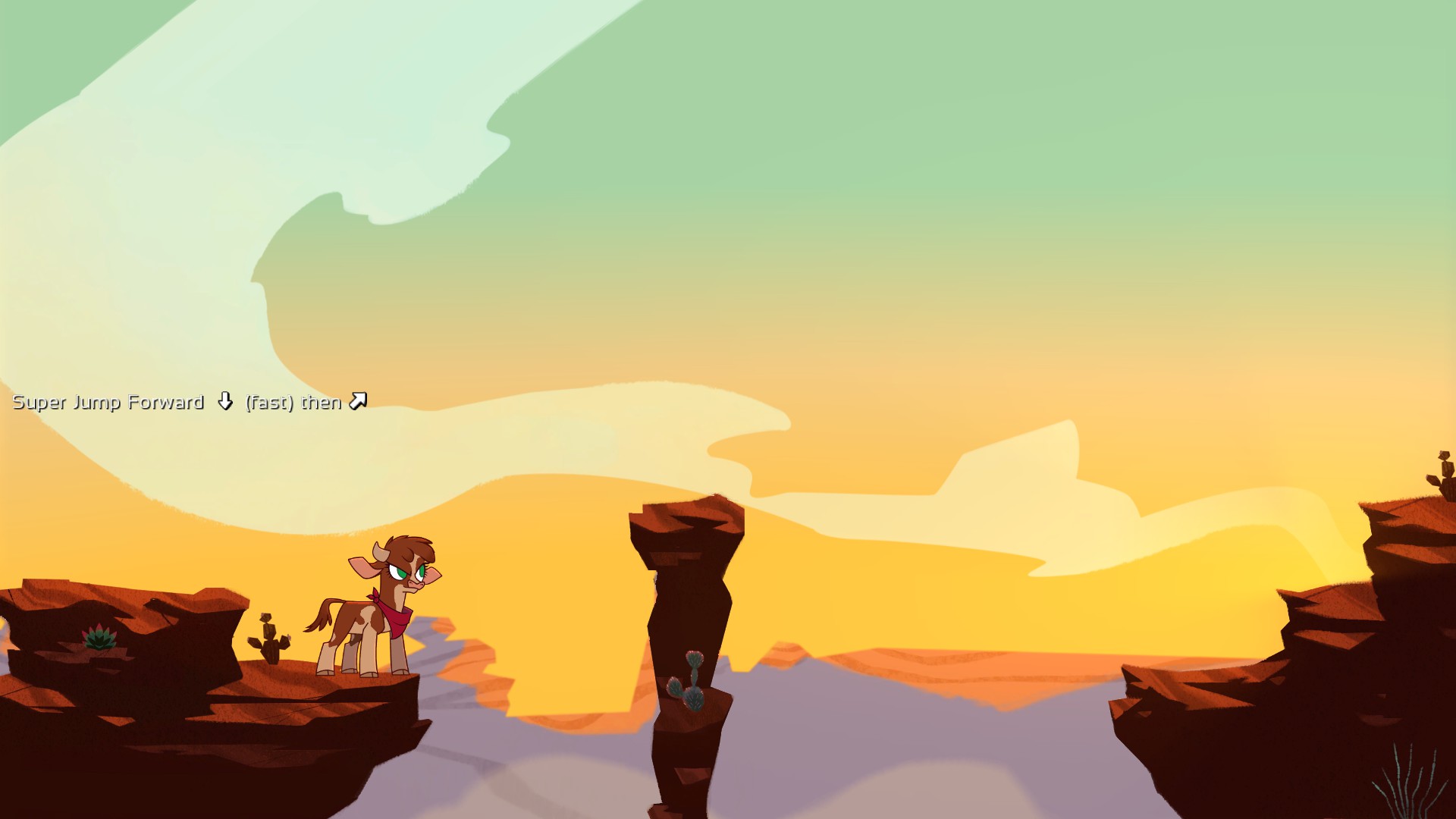 And finally, once inside a cave, we have dangerous stalactites above. One hit sends you straight to the ground. Short hops here only. 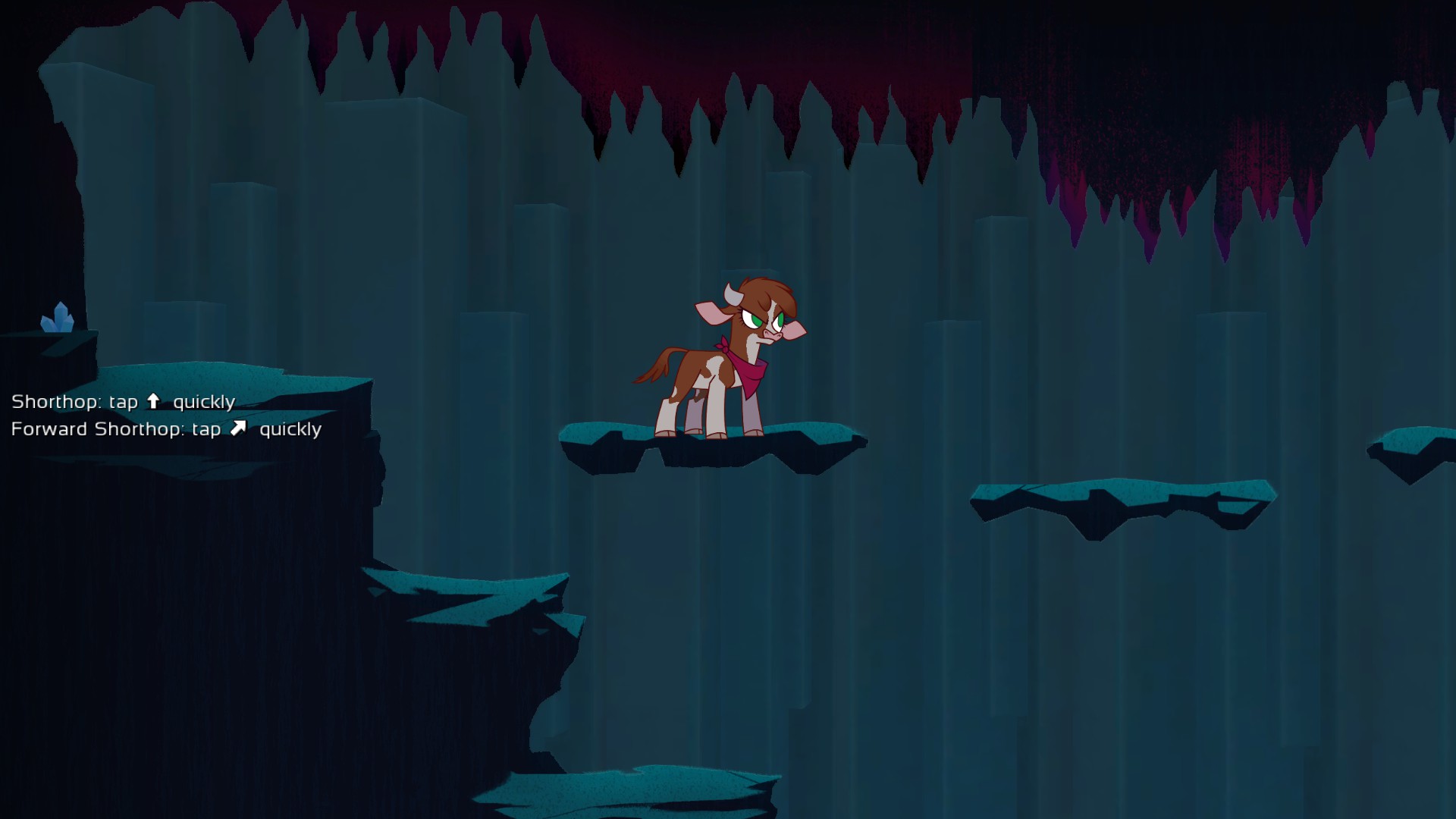 By the end of this first area, the player has been taught all ways to vary their jump distances, without having to master it in a high-pressure environment.

There’s a bunch of shadow wolves inside this cave. One of the first moves the game actively instructs you to use is Arizona’s anti-air normal. The wolves in here will always open with a leaping attack, tailor-made to be countered with an anti-air. 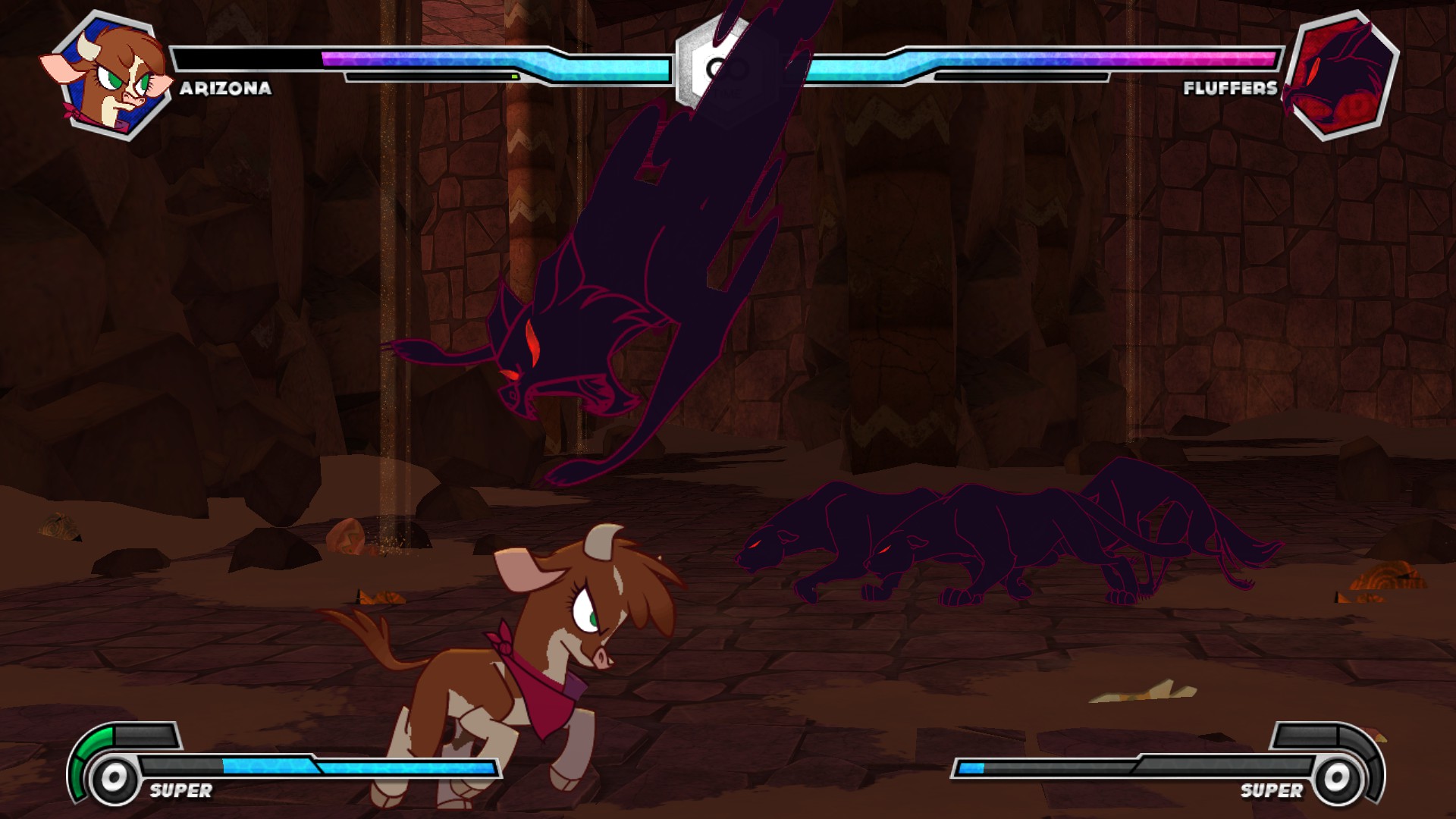 In addition to teaching anti-air, it also serves the additional function of punishing a crouch-block, a common crutch for new fighting game players. In order to effectively block this pounce, the player must do so while standing.

But it’s much easier to just anti-air all these wolves away.

At the end of the cavern, Arizona tangles with a giant snake enemy. He spits poison at a distance, and simply running back and forth isn’t enough to escape it. Time to make use of the short dash to bob and weave between it all. 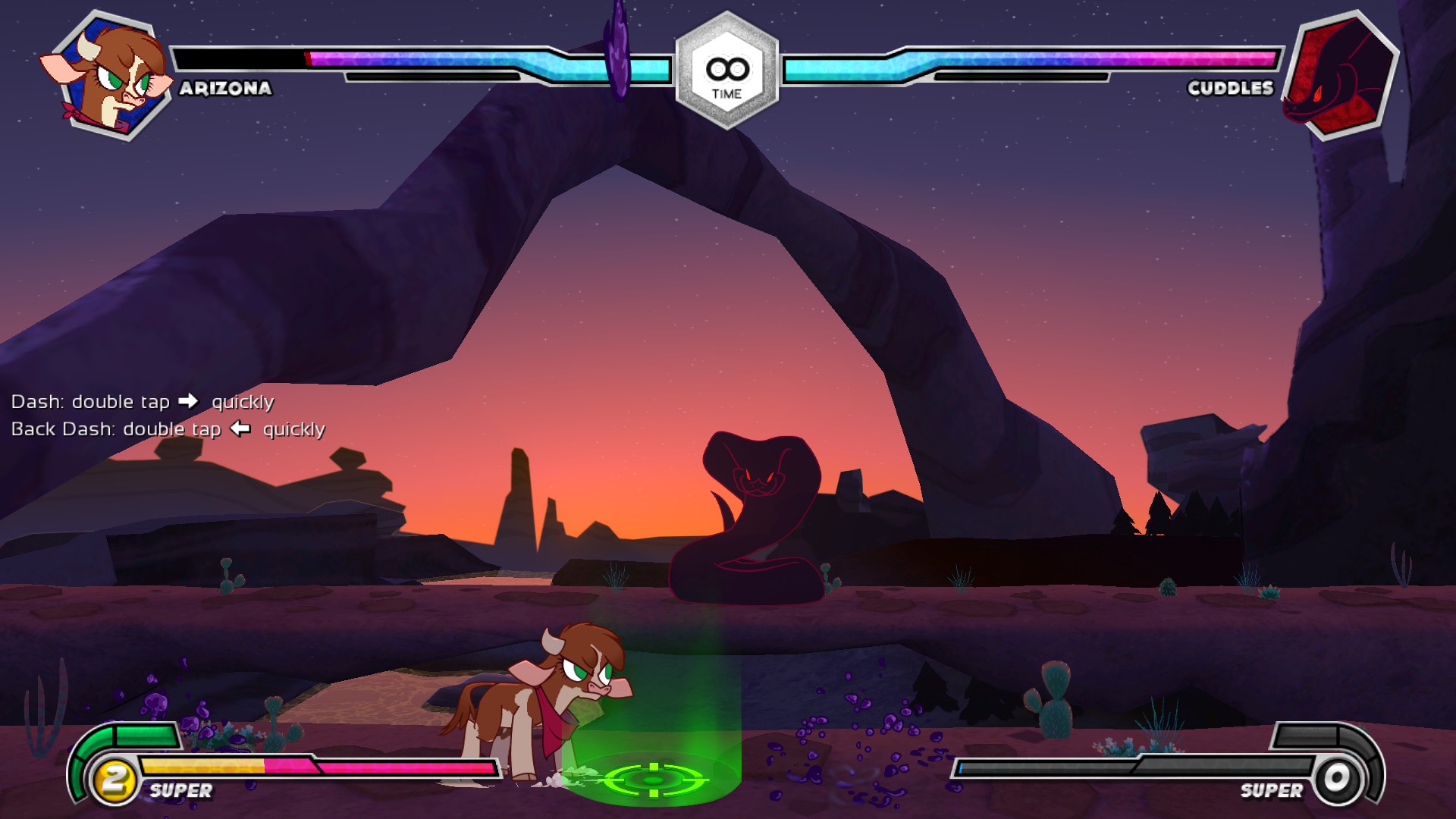 Here's the player yet again being taught a universal tool — how to use the short dash to gain optimal positioning. 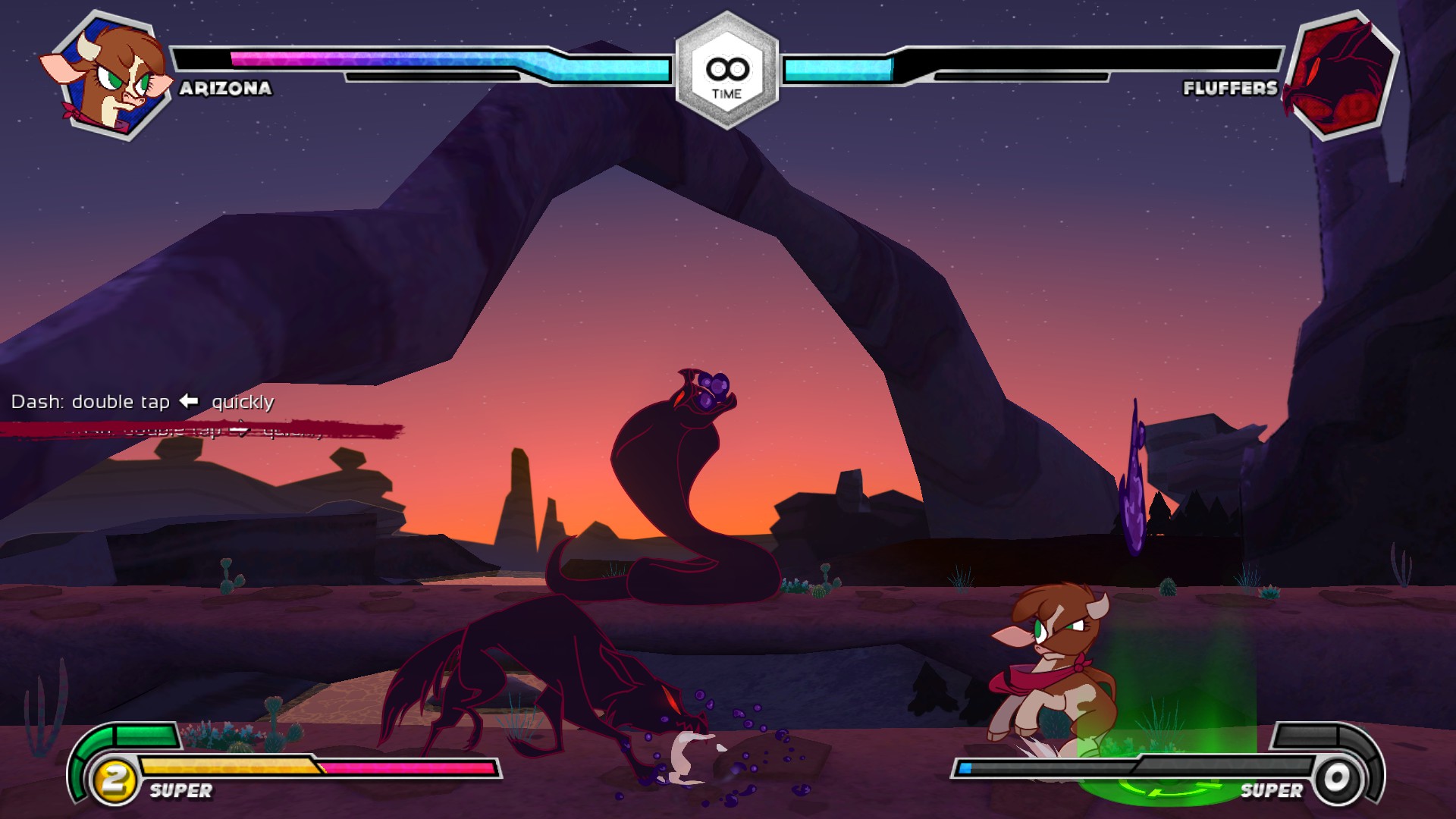 After clearing the first set of droplets, the game layers on wolves. Time to perform under pressure.

After this, Arizona makes her way to the big city. After some exploration in the city of Reine, you’ll eventually butt heads with the first other champion Arizona meets, Velvet. 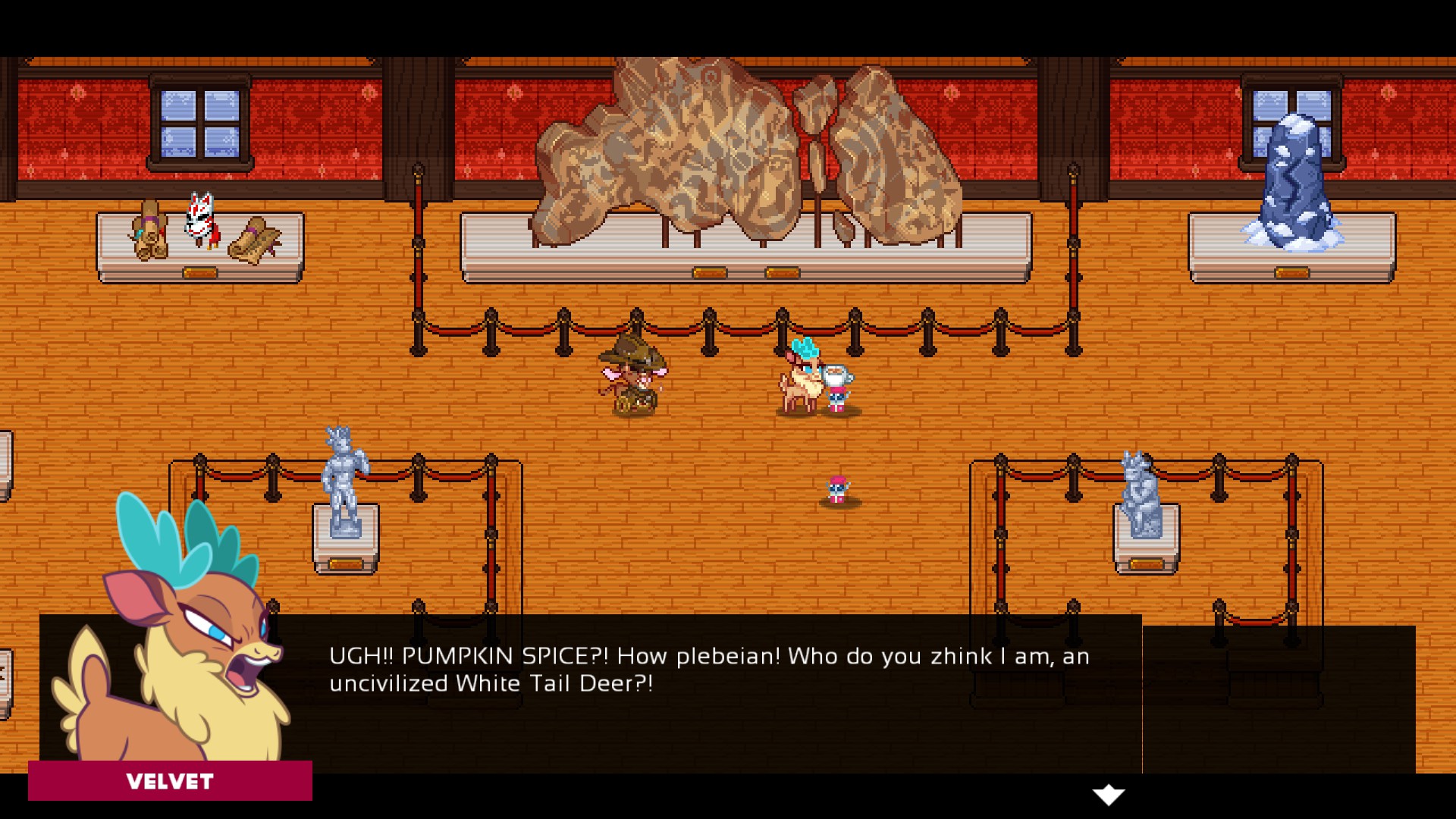 The two square off outside the museum. The first battle is the closest thing to a normal fight in Fightin’ Herds so far. Velvet makes excessive use of projectile attacks, but other than that, the first round is similar to an AI battle.

Then Velvet turns into a tornado. 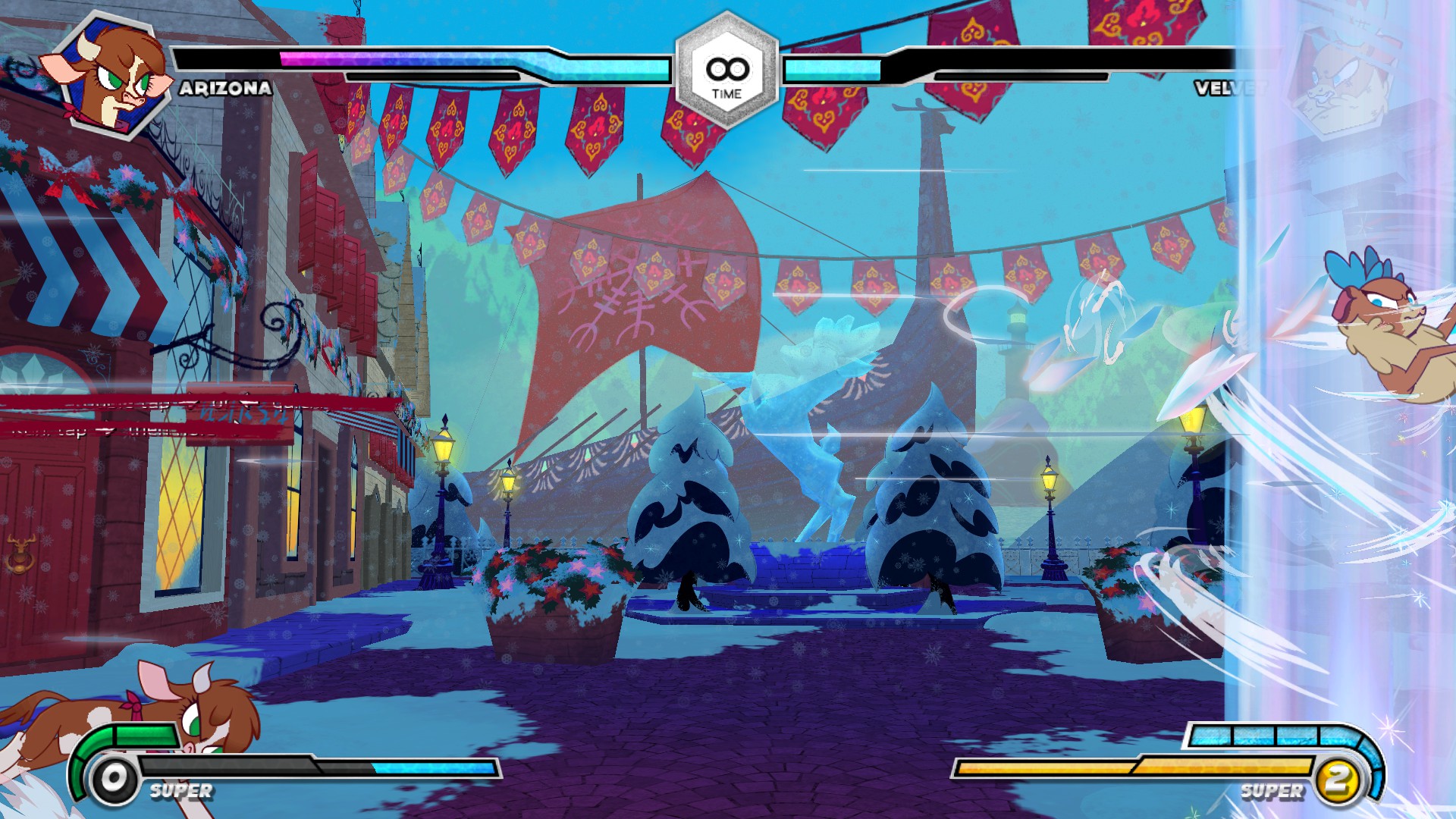 This tornado pushes Arizona away, and now the player has to close the distance while every damn icicle in the vicinity flies their way. The lesson here is clear — learn how to close on projectile spammers or die.

This one in particular is, I think, essential to the fighting game experience. Nothing frustrates newcomers like projectile spammers zoning them out. Forcing players to learn how to respond here is huge — this is a universal skill one could employ in every other fighter. 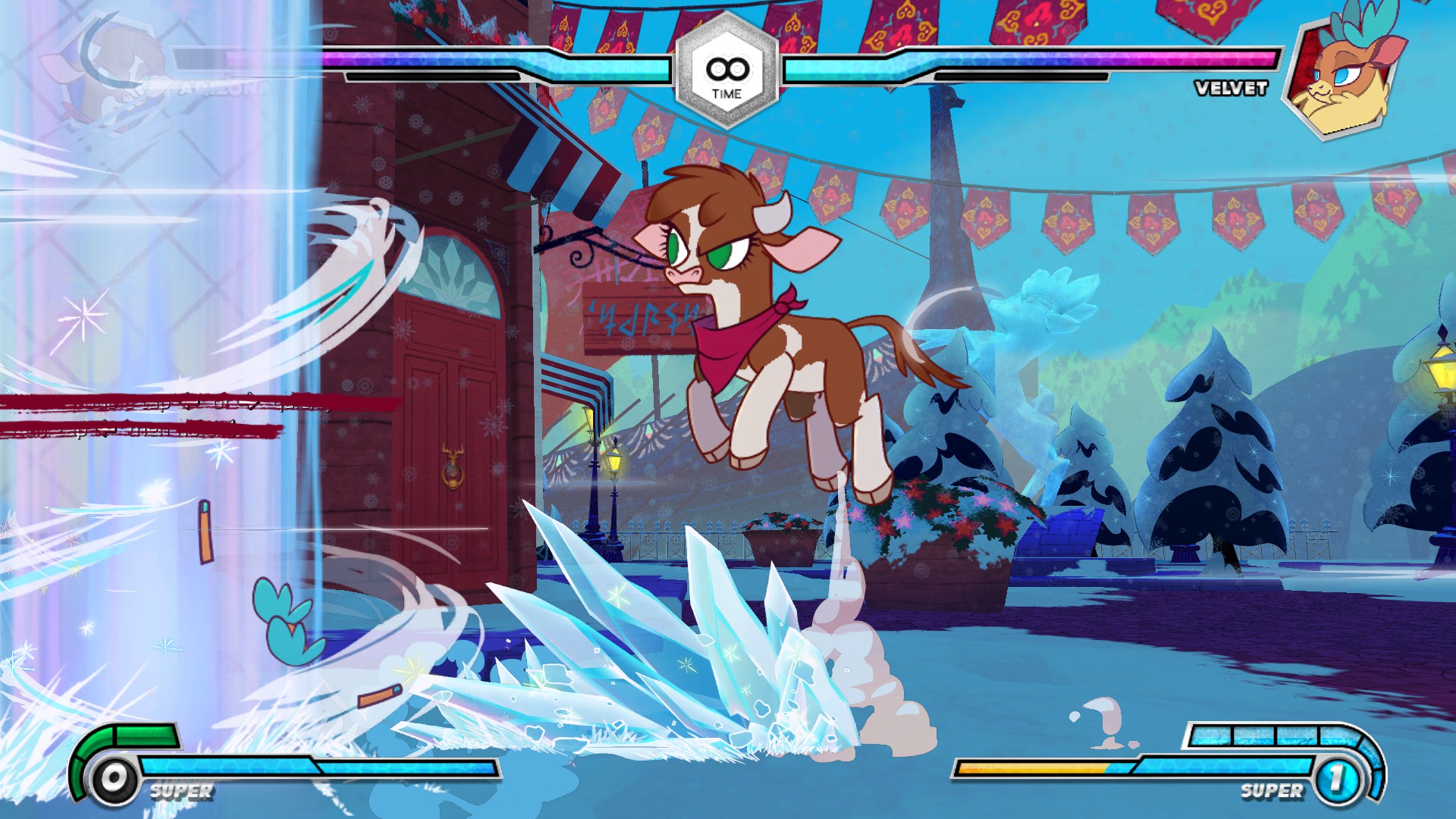 The next phase is a continued test of previous lessons. Lots of cliff climbing and bird fighting. These birds dive on you, which like the wolves, means crouch-blocking is insufficient. Anti-airs are also tremendously effective here, but the timing window is now tighter; these birds don’t linger in the air for a while like the wolves do. If you aren't careful, it's easy to get caught in a situation where the birds bombard you from both sides. 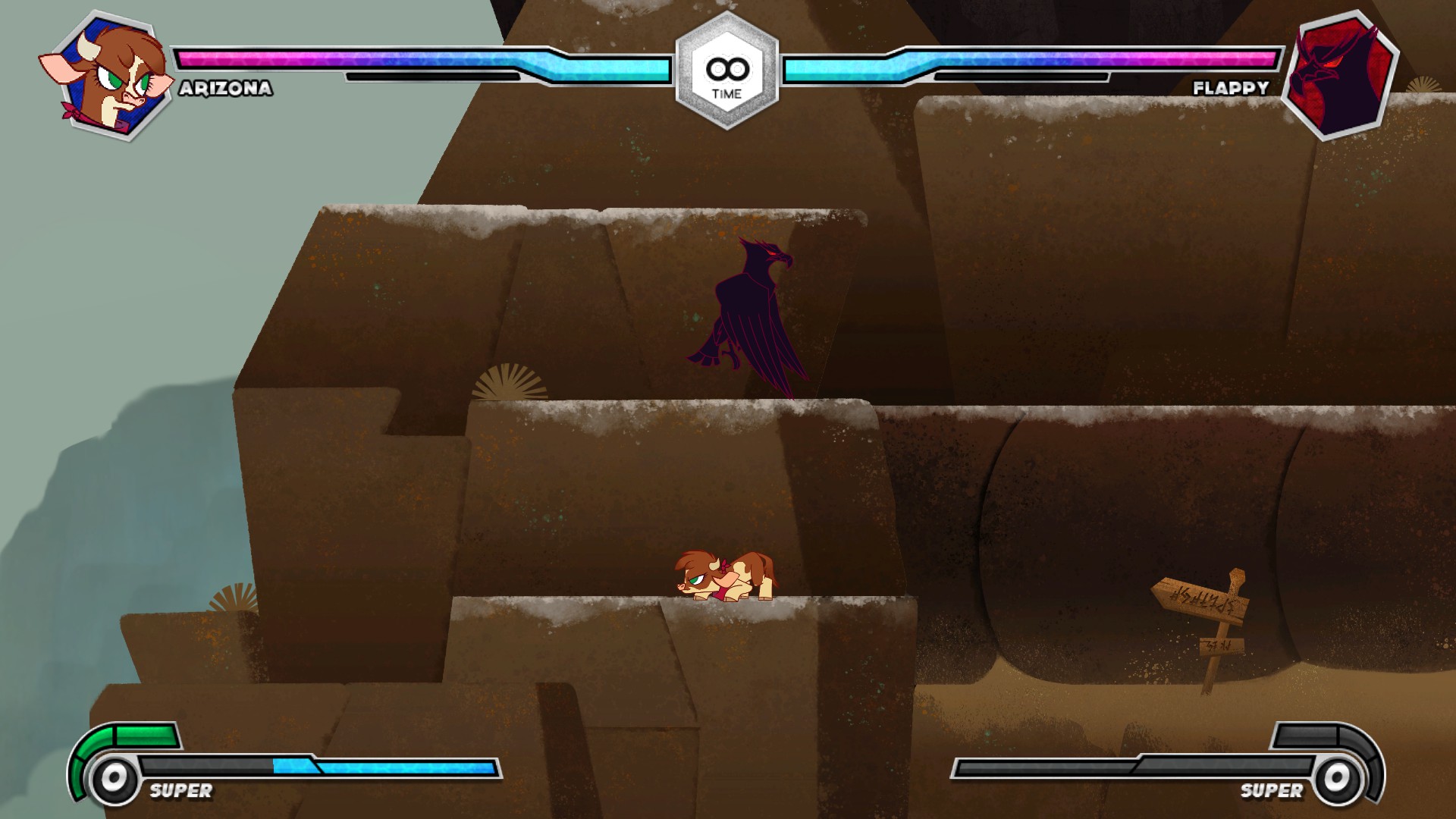 This section seems to mostly serve as reinforcement for your anti-air and jumping skills.

After some exploration sections, we meet Paprika, and it’s time for a new test. A terrifying one. 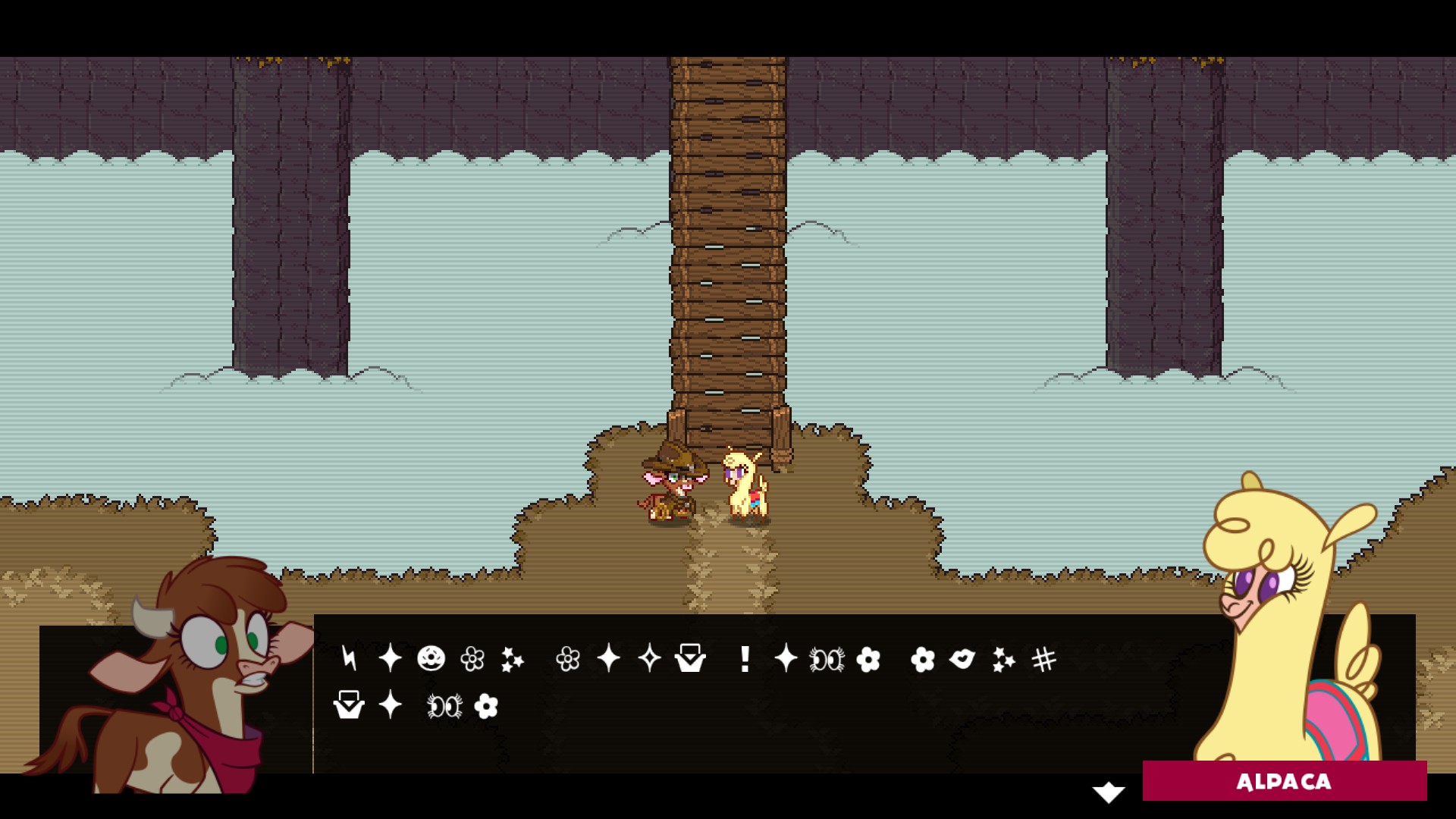 Kriss Kross Will Make Ya

The first fight with Paprika is fairly normal. She’ll use a few of her surprise techniques, like a drop from above that functions as an overhead, but for the most part, it's a fairly standard one-on-one.

Then the next round starts, and right away Paprika breaks the rules by sliding in without warning.

Once at half-health, she leaps toward the screen, says hello, and either rolls in from the side...

Watching the tail gives away what direction the roll will come from.

This leap here will always aim for slightly behind your back.

This is the cross-up — holding back to block won’t save you now. Or, to be more accurate, your “back” just flipped on its axis due to Paprika’s positioning. In order to stop Paprika’s dive, you have to change what direction you’re holding as she flies in. And as for the roll, I believe it may be unblockable. Best get in the air as she comes in hot.

This is a doozy of a challenge, but at the end of it, you’ll be far better prepared for all manner of cross-ups.

If there’s any complaints I have about this particular encounter, it’s the lack of tooltips or UI hints. As you may have noticed, previous battles have provided some kind of on-screen instrution to clue the player into how to beat a challenge — “tap to dash.” “down then up to super jump,” that sort of thing. I can imagine a new player getting frustrated with Paprika’s encounter, if they aren’t sure why they keep getting hit.

After this, there’s one last area to explore. At the end of it, we get a real nasty fight against Oleander. No lessons to be learned here — time to put everything you’ve been taught to the test. 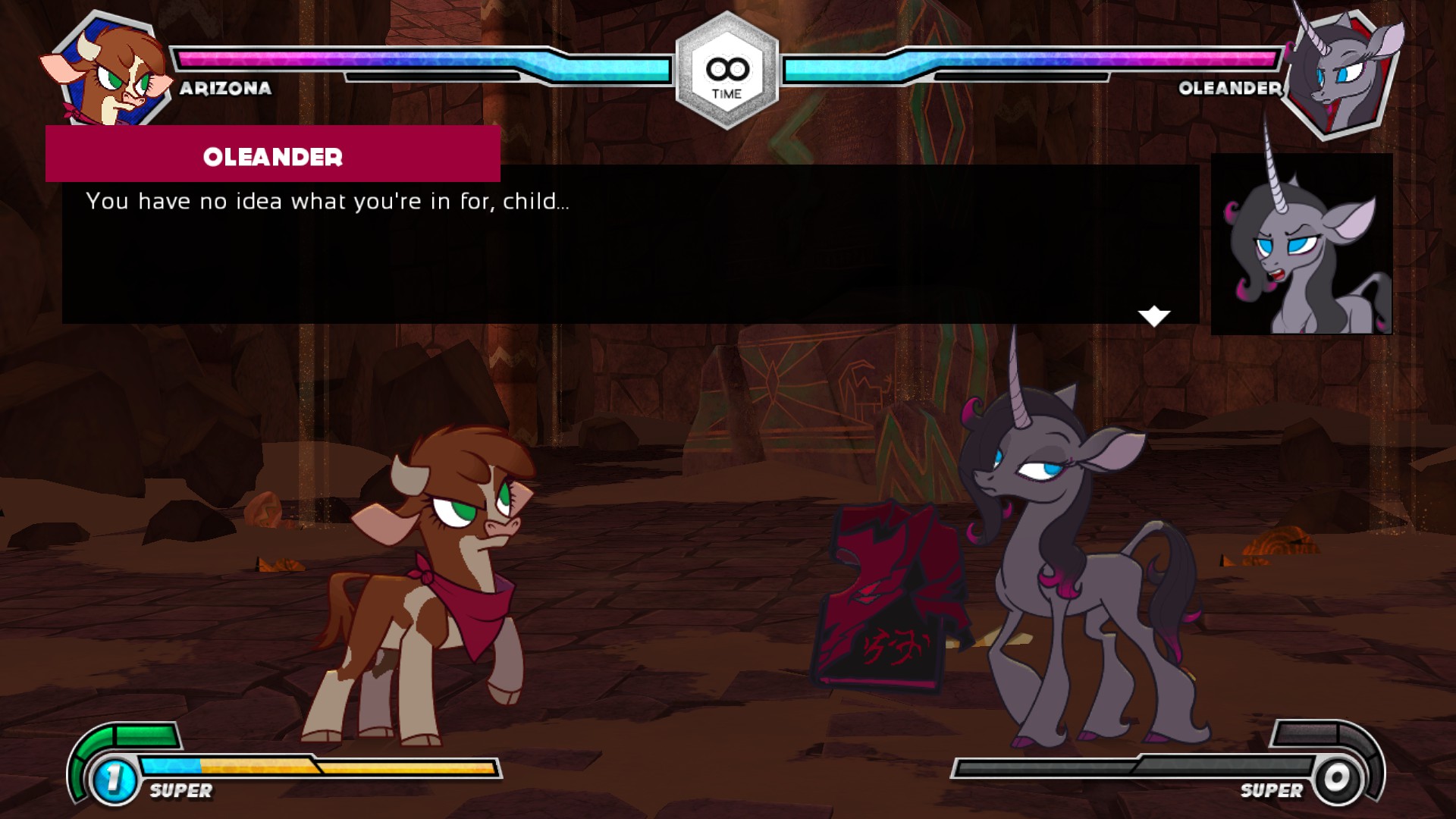 For now this is where the story ends, but new chapters are in the works.

Regardless, even with the narrative incomplete, Them’s Fightin’ Herds has already excelled. It goes above and beyond all other fighter story modes in serving as a living, actionable tutorial.

Remember, everything we’ve talked about so far isn’t a training mode — its story. Not one to skimp out on options, Them’s Fightin’ Herds also includes a robust training mode that covers all the topics you’d normally expect. Combo extensions, inputs, blocking, supers. 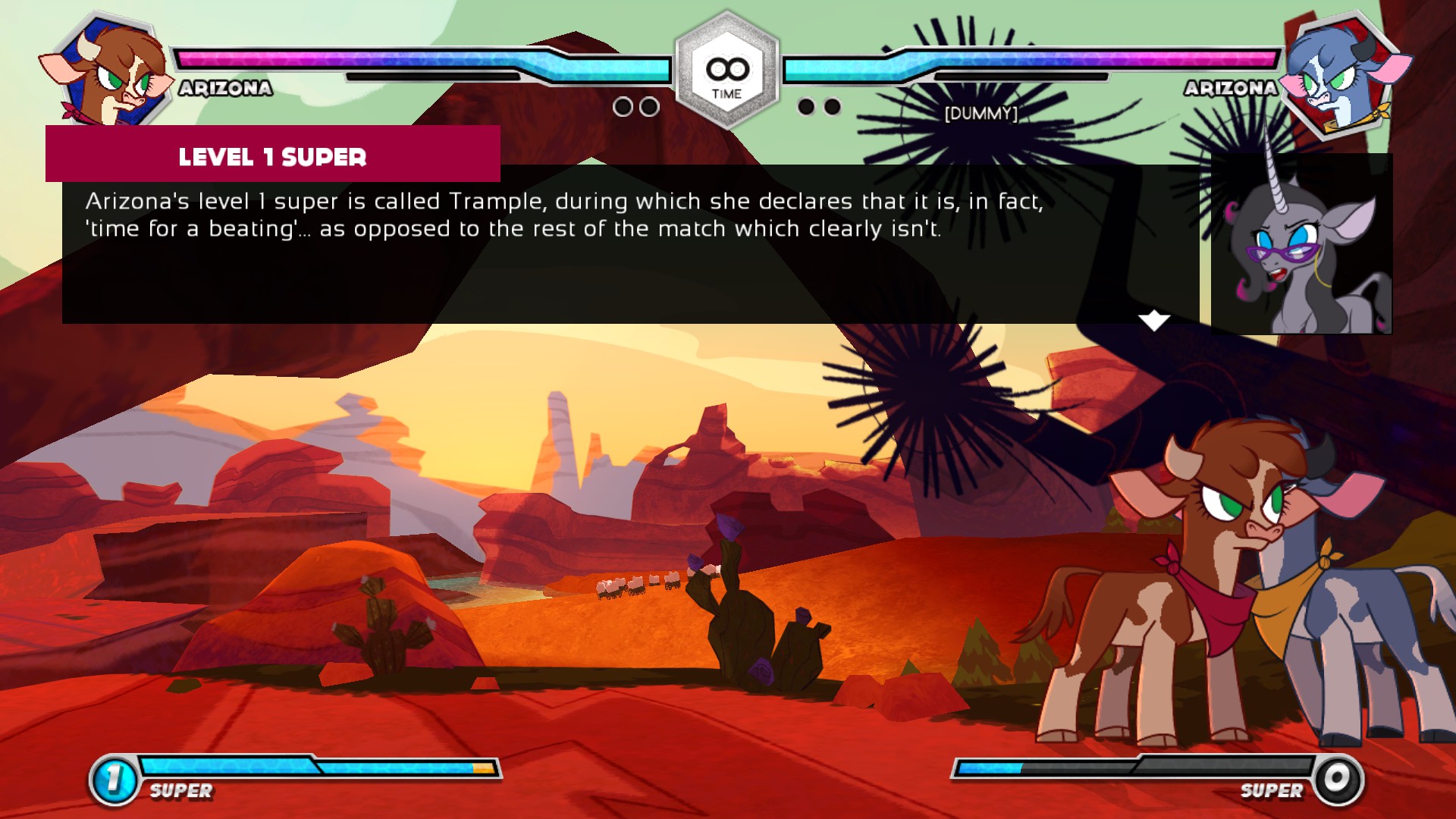 But, if you ride it out into the systems section, things start getting wild.

Them’s Fightin’ Herds actually pulls back the curtain entirely, revealing the internal structure of a fighting game. The hurtboxes and hitboxes become visible, and everything slows down to demonstrate the importance of frame data. 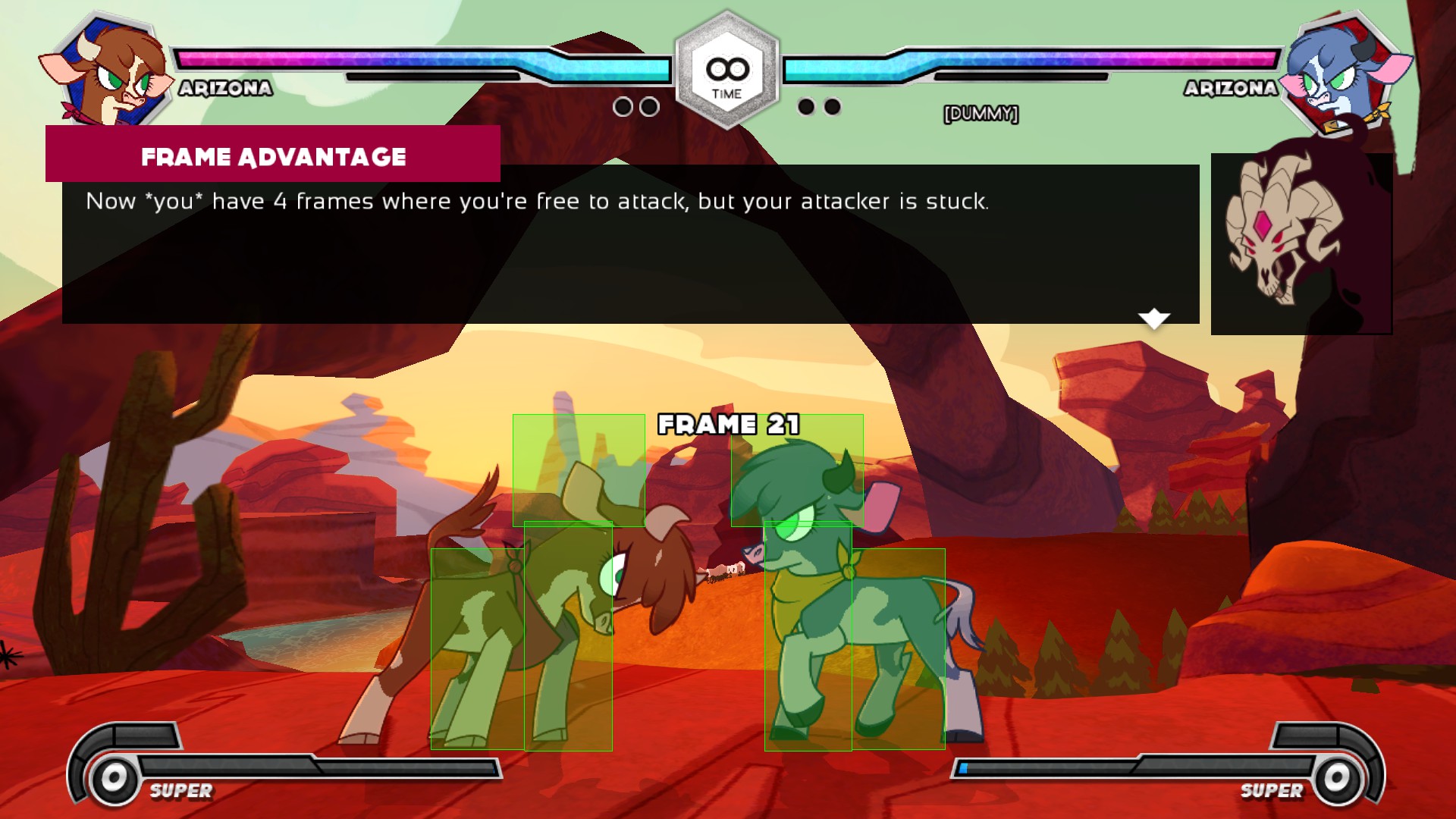 I feel most players probably won’t find this intriguing (not everyone enjoys a backstage tour) but for those who do, this is exceptional content. Here you can learn the minute details and come to understand why the pros pay such close attention to frame data.

Also, huge shout out to whoever wrote the dialogue for this training mode. 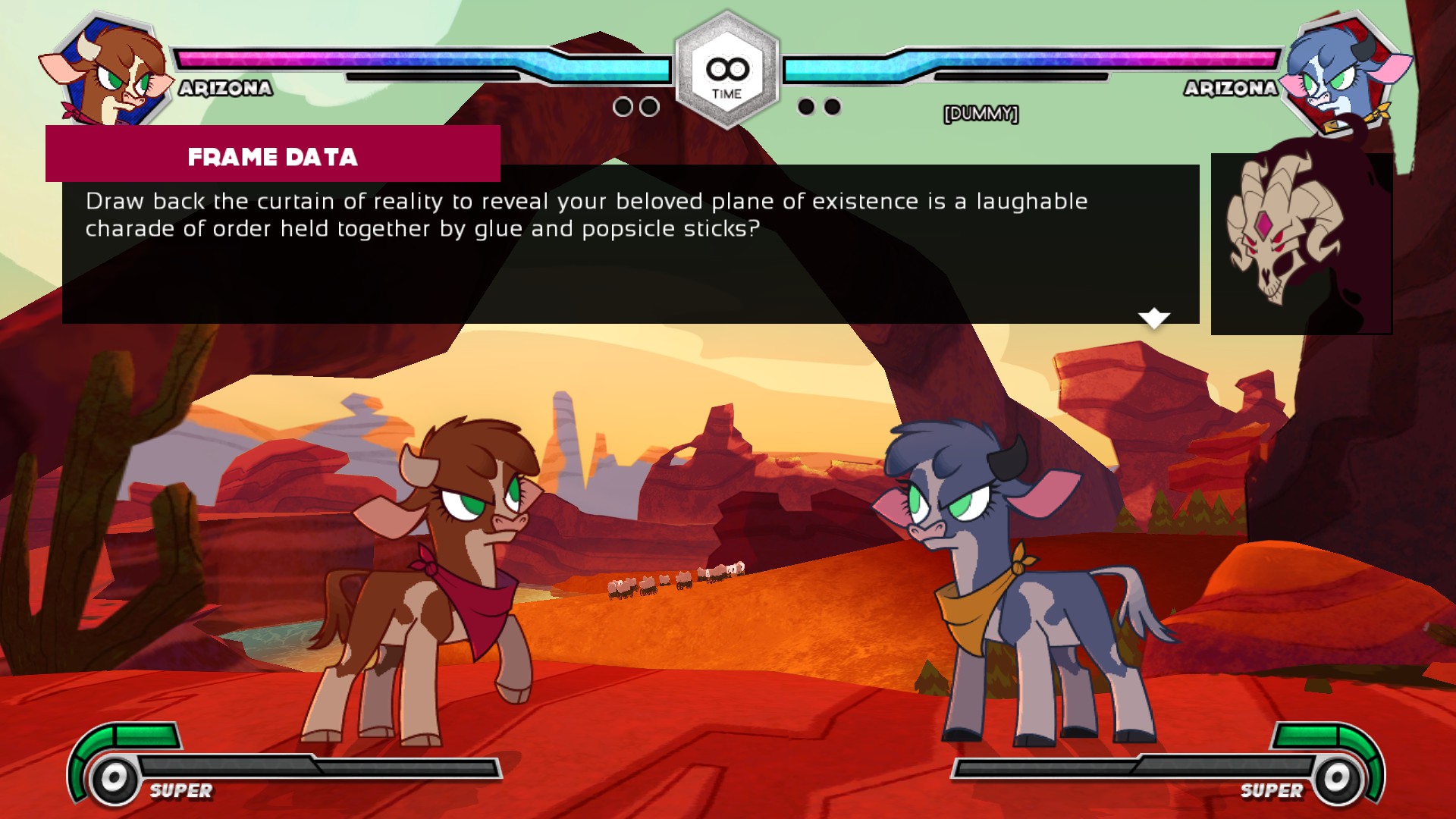 One other detail I want to highlight — not only does this tutorial teach you the best times to use a particular technique, it also teaches you when not to. Sometimes you’ll be instructed to try something out, only for the AI dummy to suddenly counter you, leading to a new lesson about the dangers of overuse. 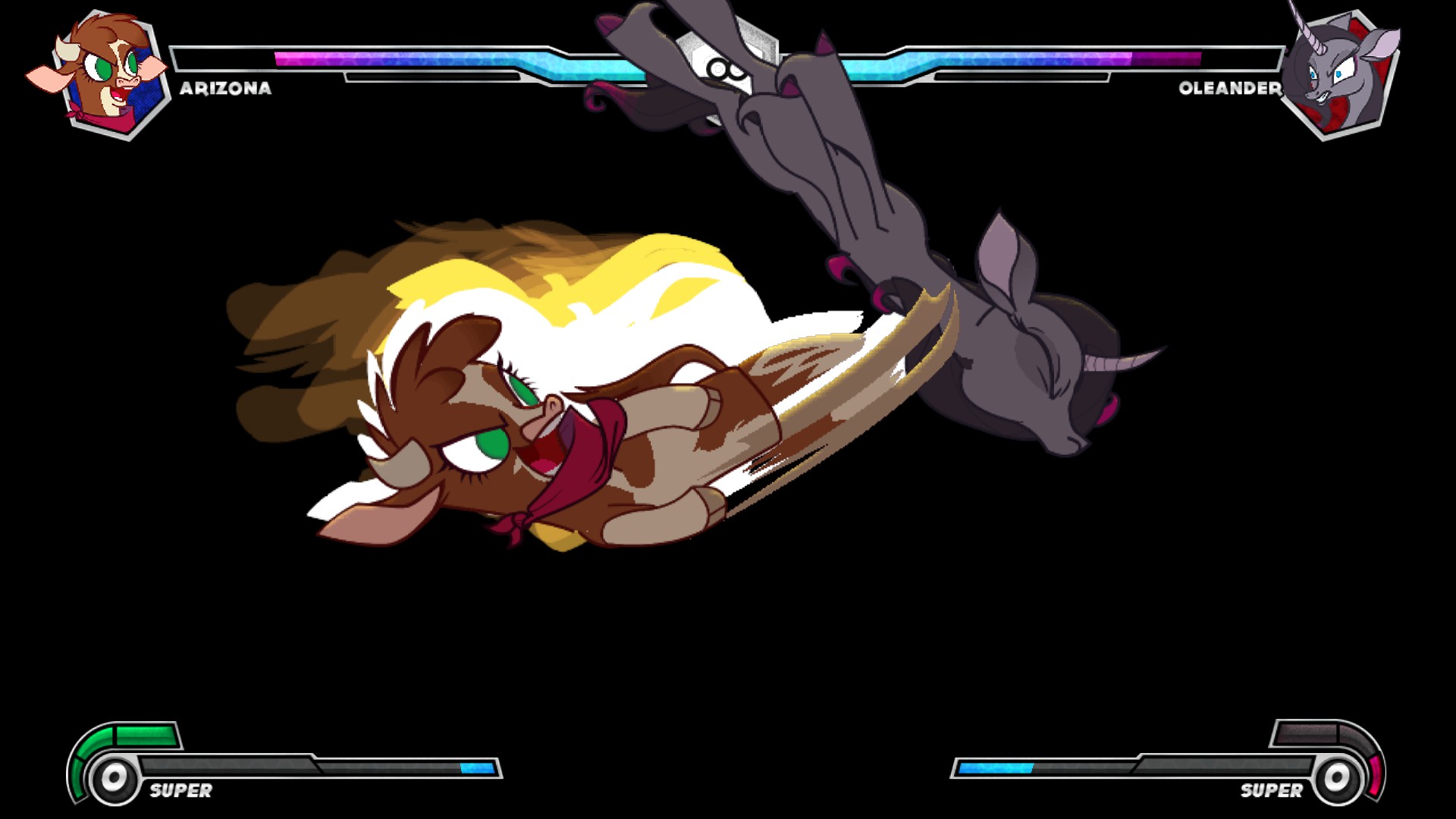 Them’s Fightin’ Herds may be the first fighting game in a while to successfully walk a difficult tightrope. Namely, riding the line between complexity and simplicity, without sacrificing a skill cap to do it.

In recent years, there’s been a growing trend for fighting games to go one of two ways — simplify, or stay dense and nearly impenetrable to new players. I don’t want to dwell on this point for too long as it could be its own article, but there’s a number of examples to point to on both sides of this equation.

Street Fighter V is now perhaps the most accessible Street Fighter ever, but the end result, if I’m being frank, is it’s not much fun to watch competitive play. Because of the lowered skill ceiling, big damage combos are now common even in standard play. The game is still enjoyable, but comebacks and blowups just aren’t as exciting when it feels like they didn’t take much effort to achieve. 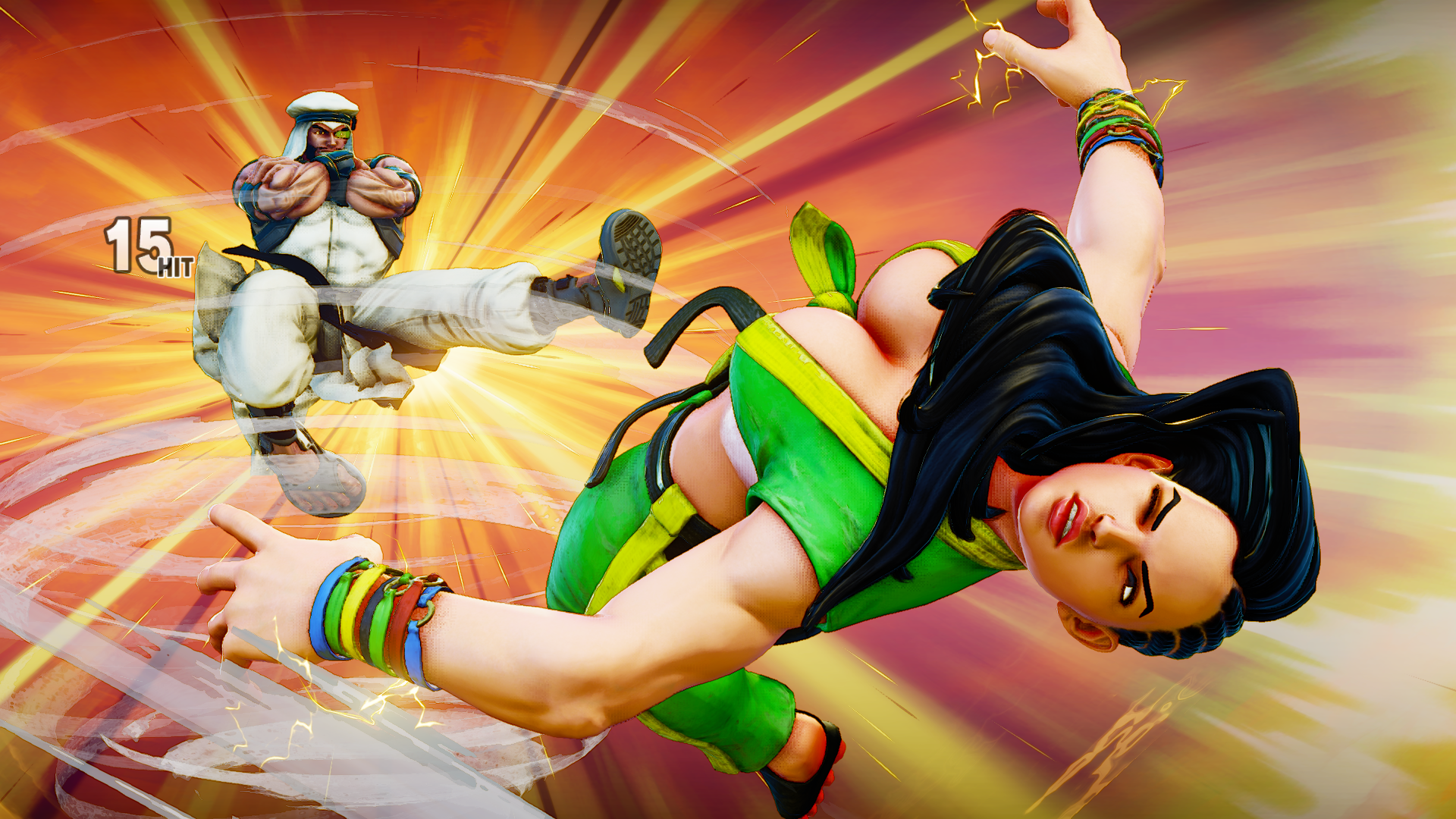 You may be surprised how easy it is to take 50-60% off your opponent’s life bar in Street Fighter V.

On the flip side, however, is something like Guilty Gear or Under Night. These games are full of dense, complicated systems and frame-perfect combo extensions. While it makes skillful play much more impressive, it also makes them highly insular — if you wanted to jump into online play, you’d have to lose hundreds, if not thousands of matches before you begin to fully understand what’s going on. 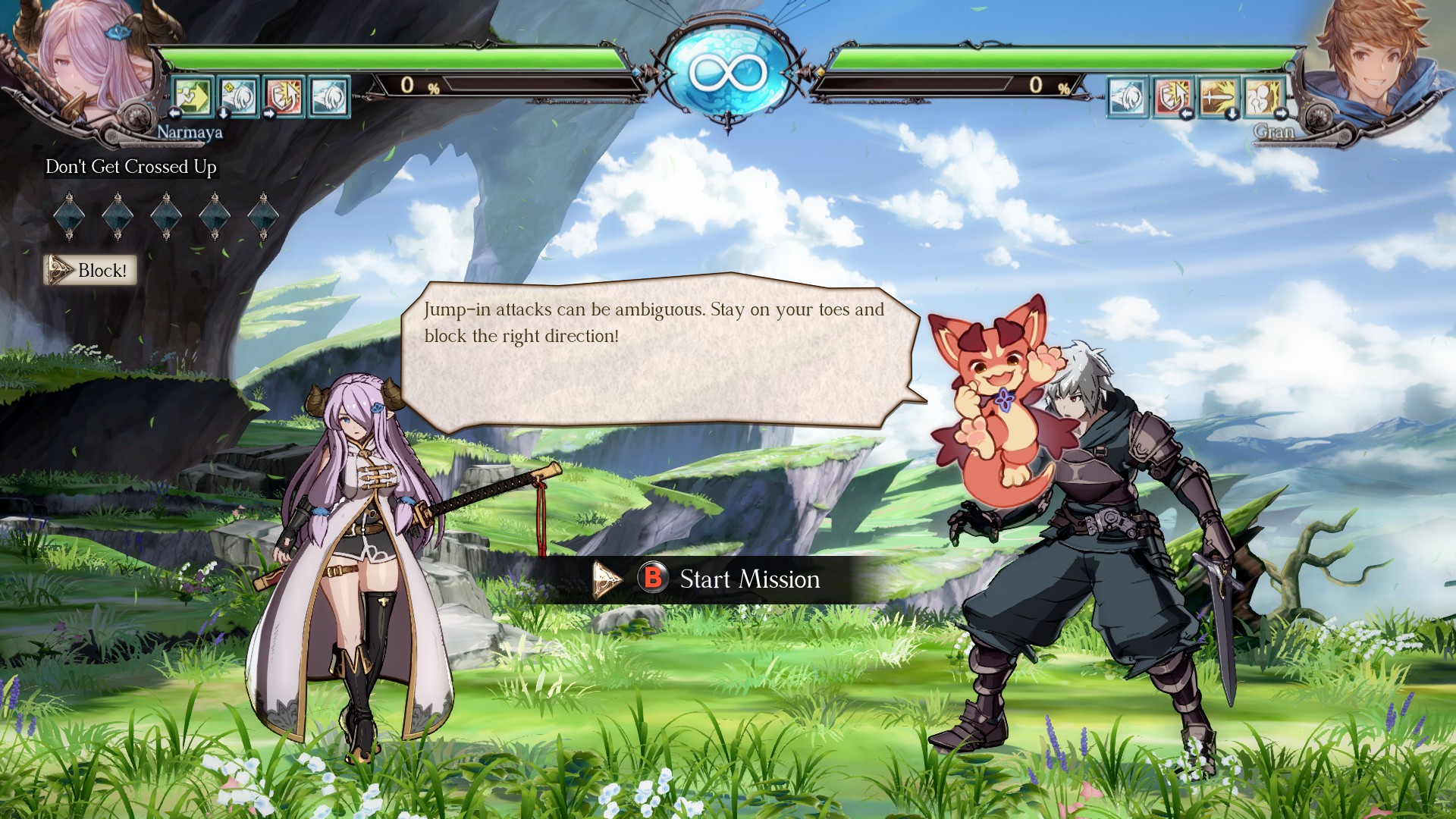 To Arc Systems credit, they include comprehensive tutorials in most recent titles in an effort to bring new players on board. But, as I mentioned earlier, pulling on knowledge learned in a vacuum in a tense moment is incredibly hard.

Them’s Fightin’ Herds has found a way to ride the line. With one encounter after another designed to teach you a concept in the midst of combat, Herd’s story mode gives new players all the tools they’ll need to be competitive online. And most importantly, they accomplish this without having to lower the skill ceiling — while all your normals and specials are simply executed, there’s still plenty of tricky timing, spacing, and mix-ups at work to keep things complex. Sure, you'll probably get destroyed online by better players still, but you'll be able to comprehend where you're going wrong and work to improve, rather than feeling like you never had a chance.

As the FGC recompiles for 2021, I think it’s important to examine how to become more inclusive. Them’s Fightin’ Herds has presented an unbelievably perfect solution to a problem that’s plagued the genre since its inception, and I hope Mane 6 gets their turn on the main stage after this cleansing fire runs its course. 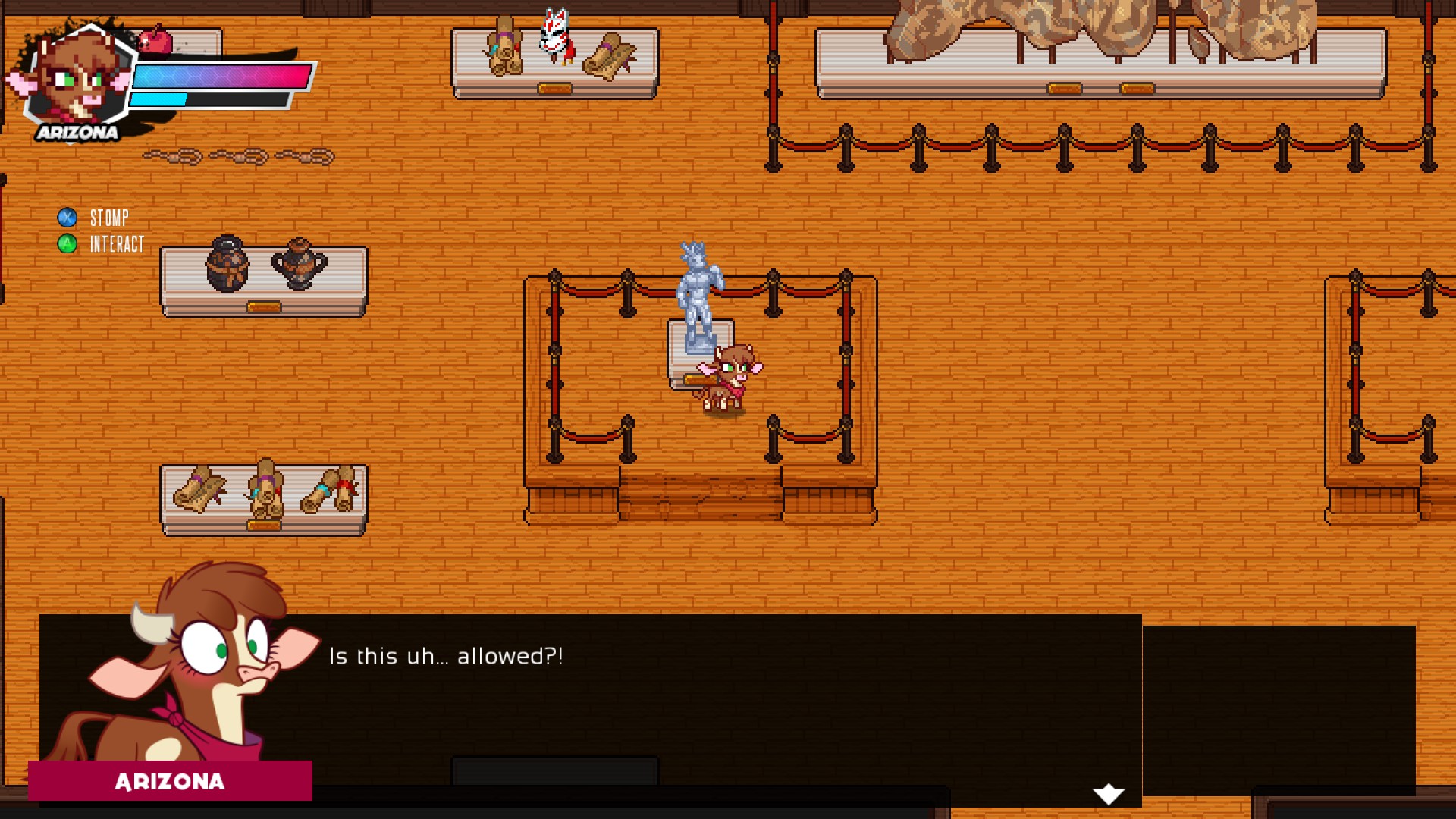 Them’s Fightin’ Herds is available on Steam for $14.99, and is well worth your time and money.