The No More Heroes franchise sat dormant for seven years until Travis Touchdown burst back onto the scene. The most recent release is No More Heroes 3, but there's one more game in the series we need to tackle first...

Back in 2007 Suda 51 released a stylish, in your face, absolutely metal-as-fuck Wii game called No More Heroes. Travis Touchdown, the most angry and aggressive nerd to ever walk the earth, embarks on a mission to become the number one assassin in a secretive underground death league. He murders opponents in ruthless fashion with a homemade lightsaber and wrestling moves. 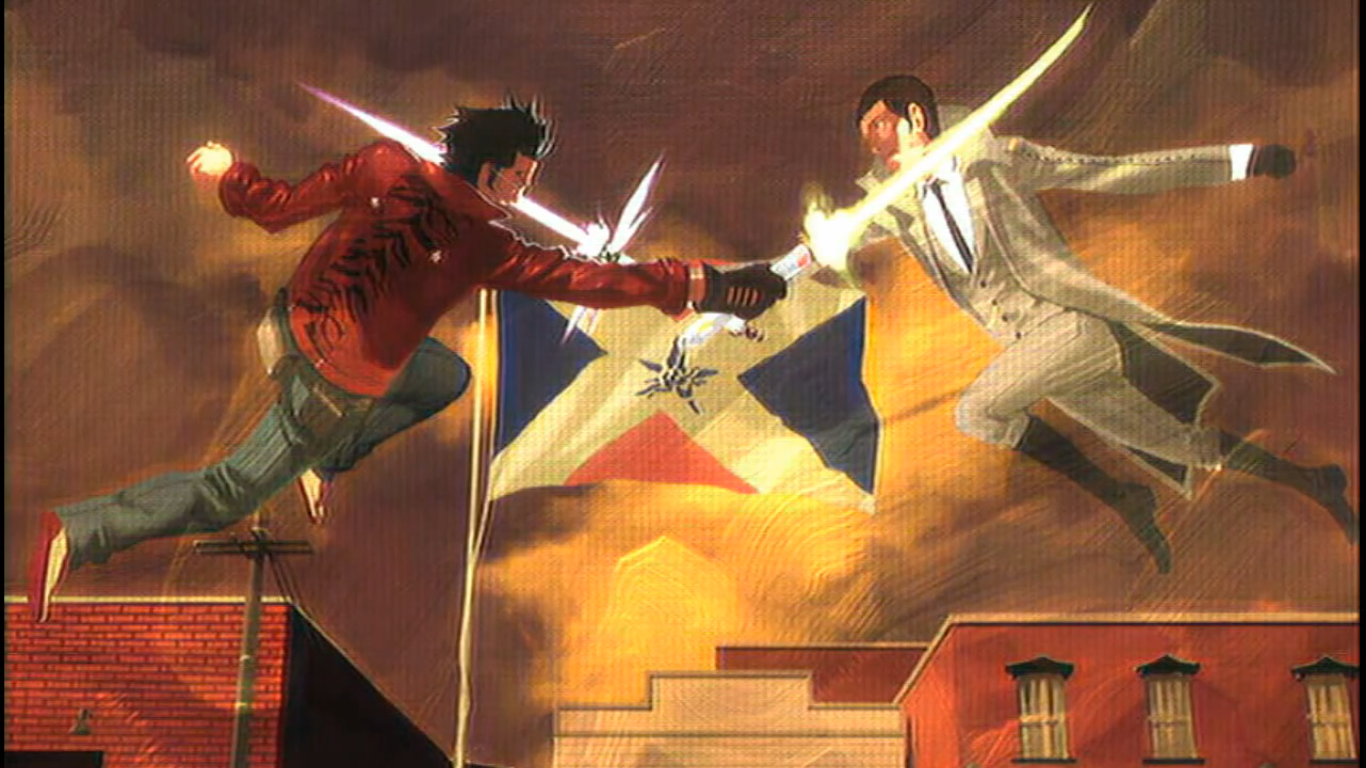 While No More Heroes certainly had its flaws, it stands out for more than just its style. Suda 51 is an autor among creators; his voice and vision are apparent and visceral in every game he’s ever made. It makes his creations intoxicating to play, even when they’re less than the sum of their parts.

Fast forward to the current day, and No More Heroes has returned. Travis Touchdown has grown up with his audience; he’s in his forties, has a wife and kids, and struggles to balance his new obligations with a growing need to sate his bloodlust. 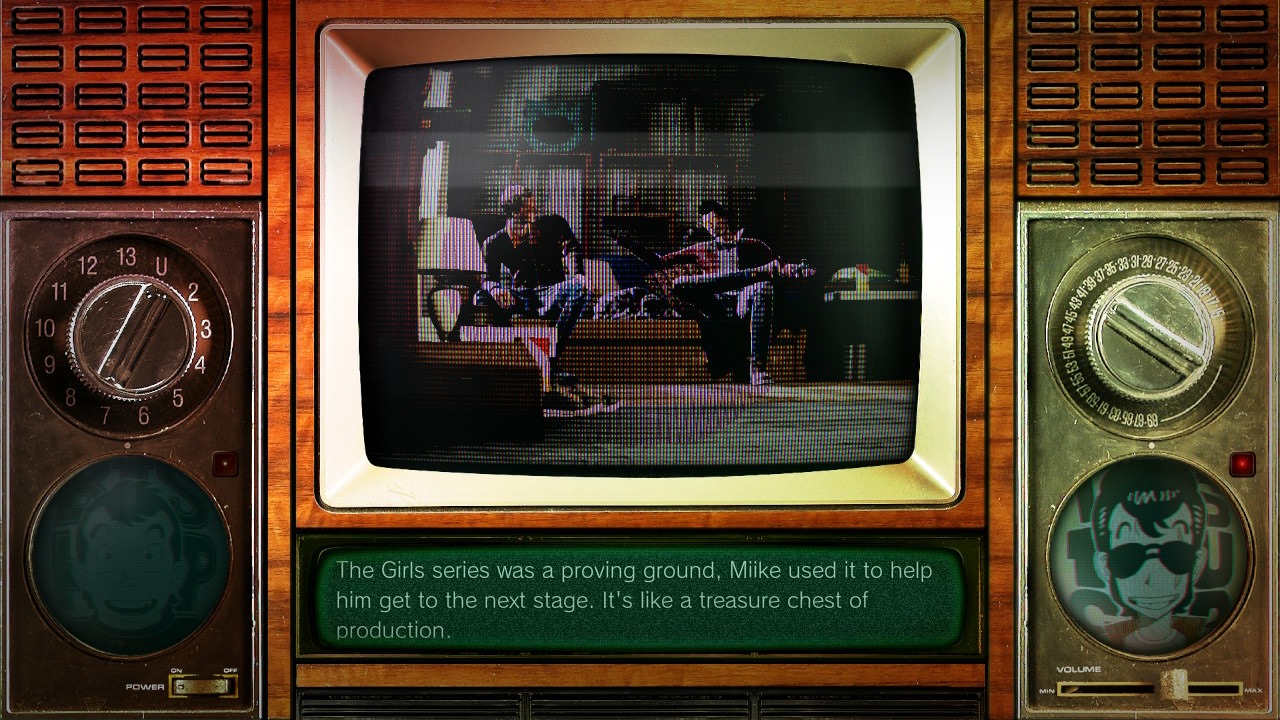 And he has a podcast about Takashi Miike films. All common, relatable millenial woes.

I figured it was well beyond time to catch up with the series and see the return of Travis Touchdown. First up is 2017’s budget Switch Release... 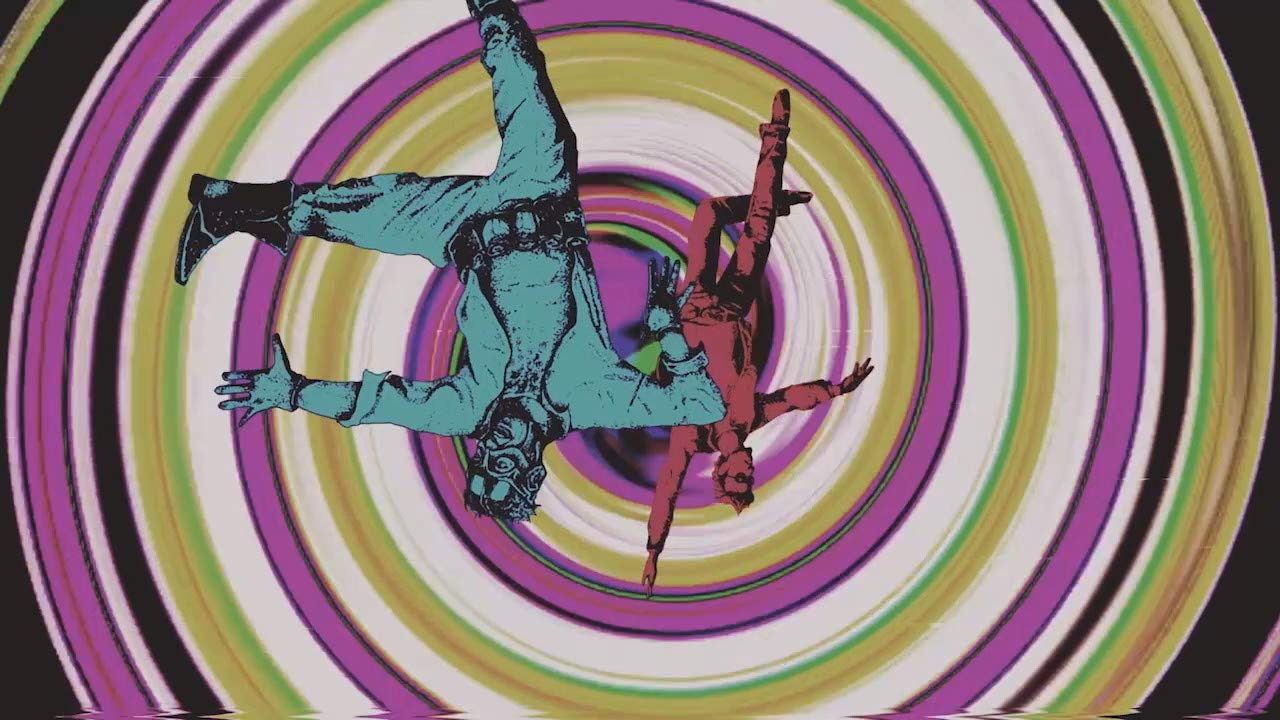 Travis Strikes Again marks Travis’s first appearance since 2010’s Desperate Struggle. In it, Travis Touchdown has gone missing. Bad Man, father of one of the many assassins Travis killed back in the first No More Heroes, tracks him down to a trailer in the woods seeking vengeance.

Ends up Travis himself tracked down an incredibly rare and cancelled video game console called the Death Drive. Bad Man and Travis duke it out, but in the struggle they are sucked into the deadly console and must work together to survive its gamut of games. 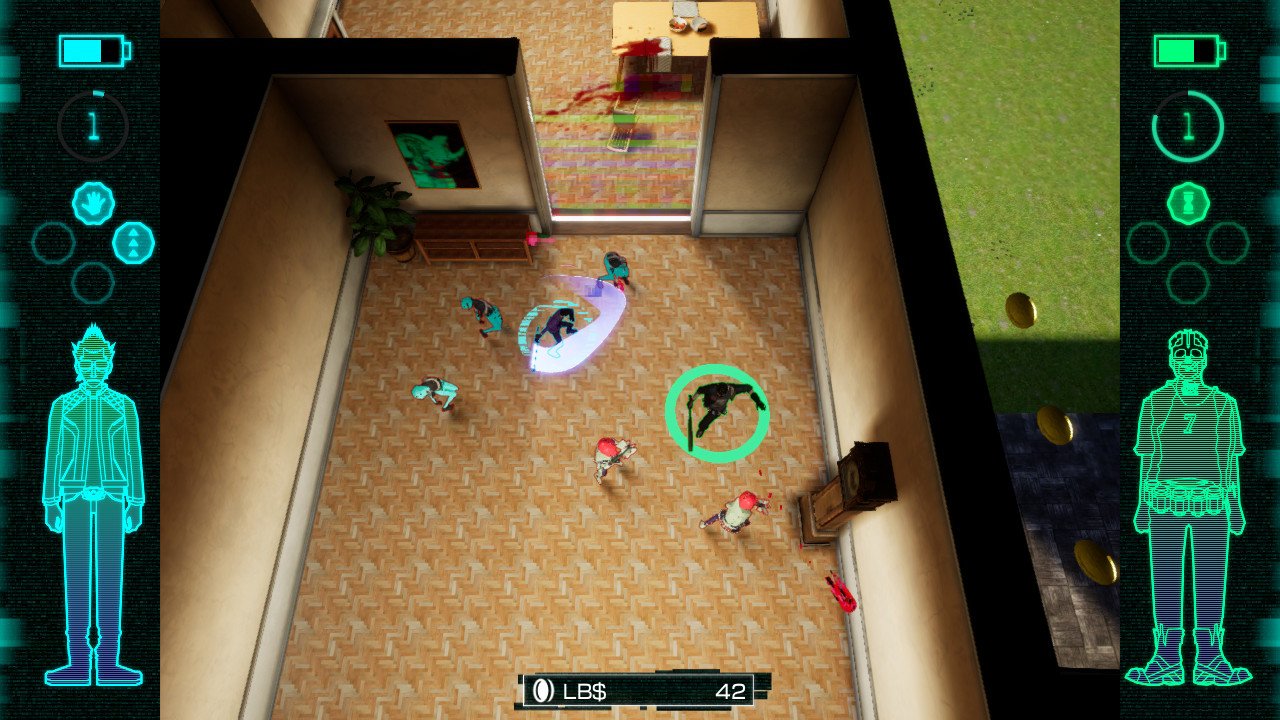 Local Multiplayer confirmed, but good luck finding a plus one for this shindig.

Everything I’ve just described sounds really exciting, I bet, and it is... at first. Travis Strikes Again lacks the mechanical depth of its predecessors and as a consequence, the combat soon outstays its welcome. The game supplements this with acquirable skills, represented as chips Travis holds aloft in a recognizable pose. You can equip four at once, and each takes some lengthy amount of time to become available again after use. Aside from that, it's mostly mashing your swing saber (and/or) bat buttons. 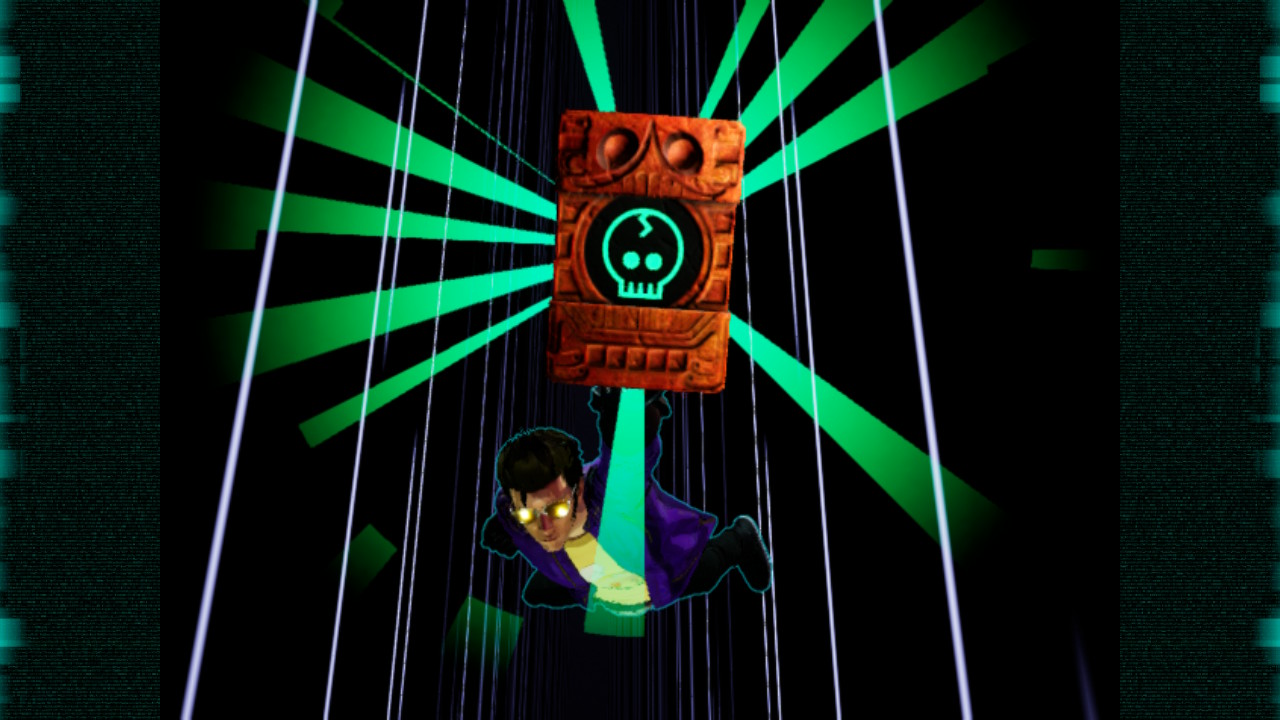 Alas, what ensues from here is a cooldown based hack-and-slash adventure. It’s a lot of running in circles swinging your beam katana, waiting for your better abilities to become available. While enjoyable at first, the novelty soon wears off by the 307th kill-dozens-of-dudes sequence. What really ends up underselling the combat, maybe more than anything, is the premise. See, Travis and Bad Man have to battle their way through six different video games, each with different themes and settings. And yet, no matter which game you slap into the death drive, you do the same goddamn thing for most of it. Aside from an occasional mini-game here and there, only the set dressing changes. 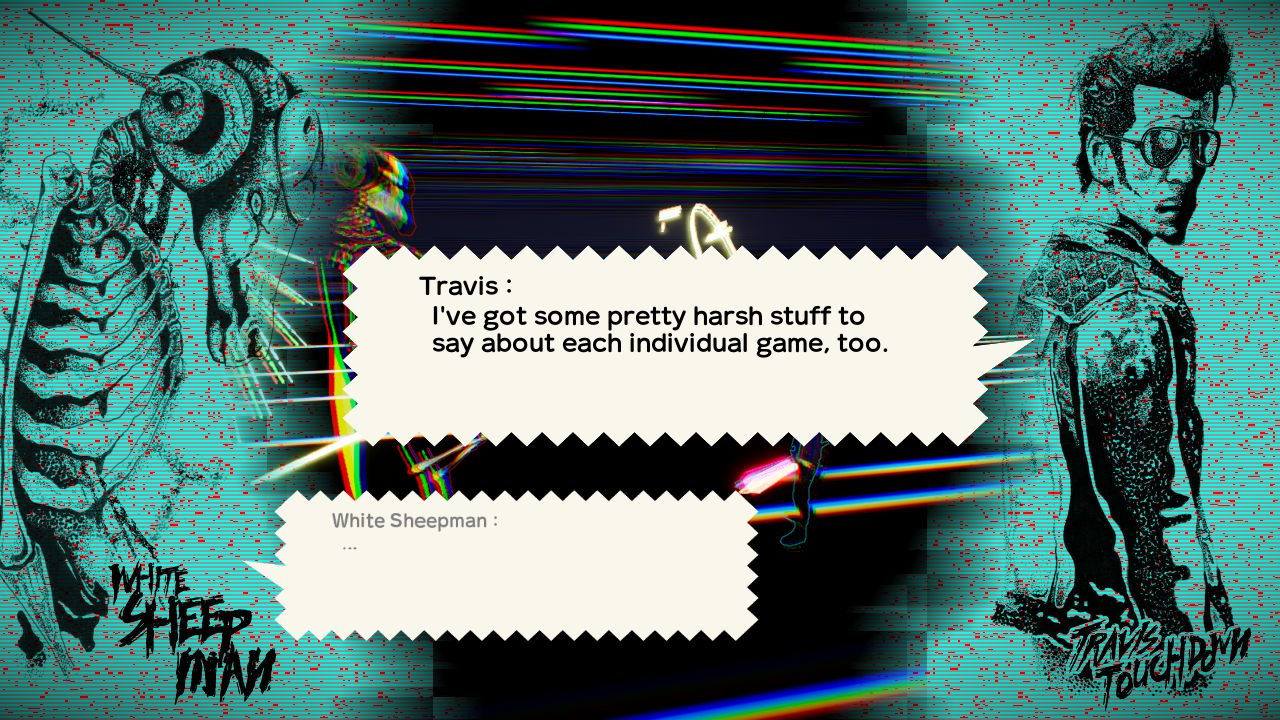 For a start Travis, they’re all the same damn game.

It is, without a doubt, the most unfortunate part of this package.

But, as is often the case with Suda51, the aesthetics, soundtrack, and story elevate this would-be bland experience to something far more memorable.

Travis Strikes Back ends up serving as a lengthy commentary on game design. It pokes fun at frequent gaming tropes, from everything to palette-swapped bosses to obnoxious fetch quests. Each game you hop into serves to poke fun at recurring trends and genres. It’s here, in dedicating fully to the bit, where Travis Strikes Again really shines. Each game has its own over-the-top trailer, and even comes with a fake review right out of the era of GamePro or Tips & Tricks. 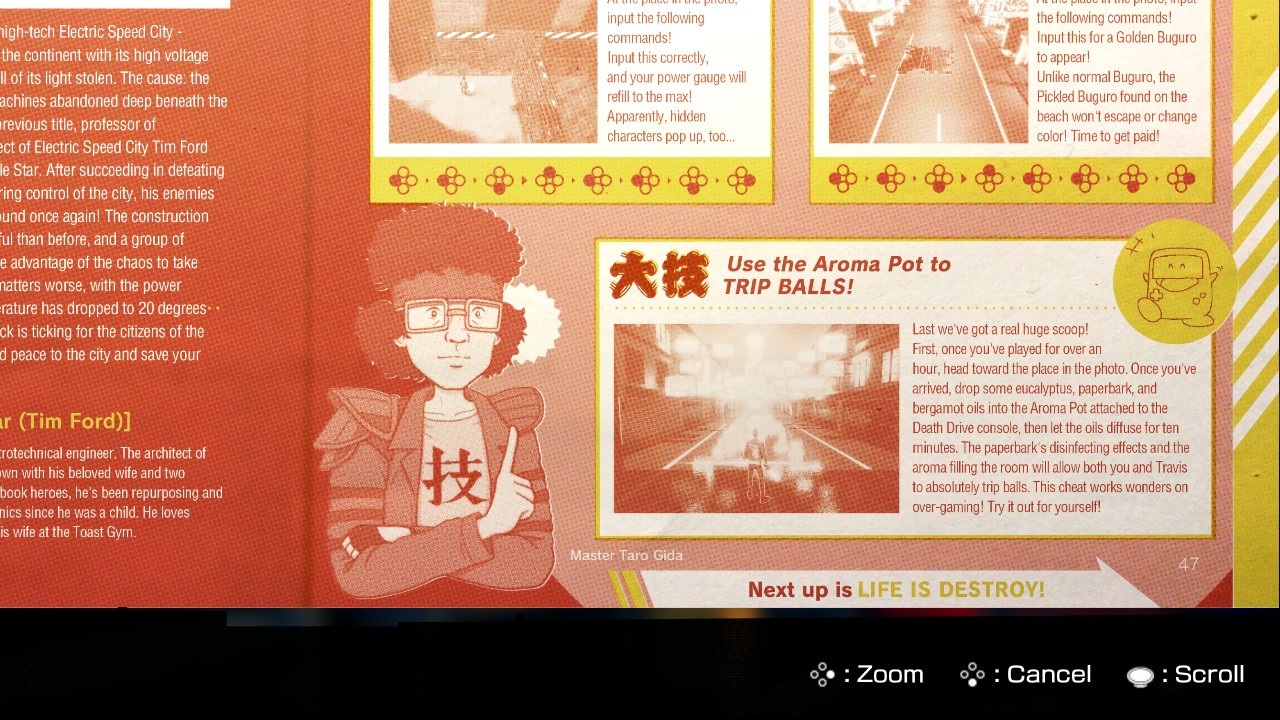 Complete with fake cartoony personas for the critics and everything.

It goes a step further though, by sometimes pulling back the veil entirely. At one point Travis drops into an unfinished prototype, full of placeholder assets and janky pathing. Later on, Travis gets plopped into an unfinished sequel to Suda 51’s Shadow of the Damned from 2010. 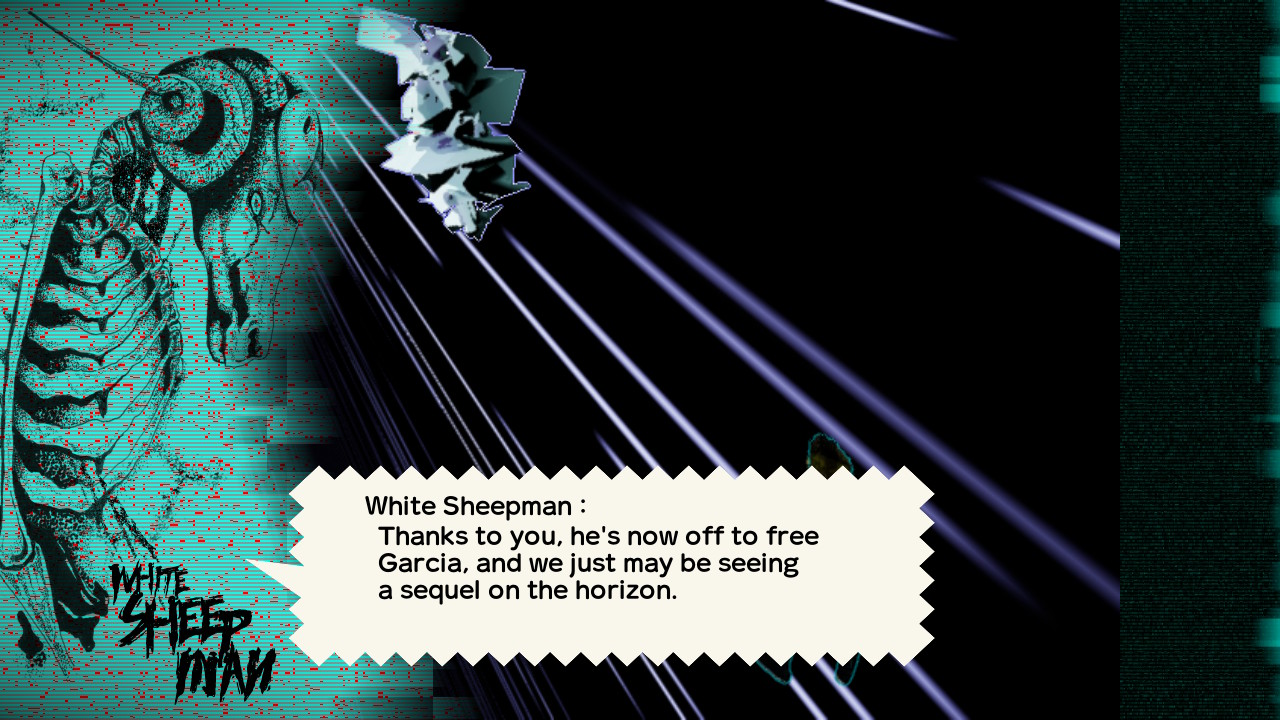 Unclear if this is teasing a Shadow of the Damned return, or just a joke about the current frequency of reboots and sequels. 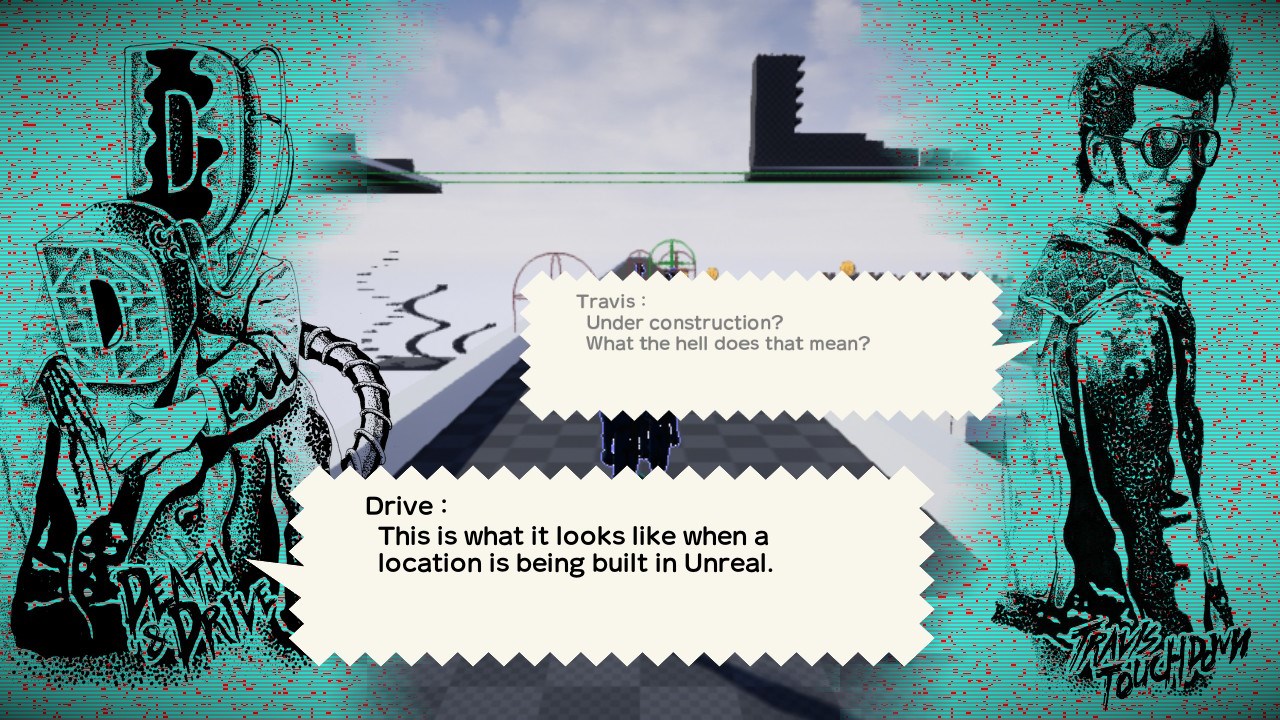 Later on Travis finds what he needs to complete this particular game in the Death Drive, but until then this unfinished prototype remains unfinished and unbeatable.

Even the DLC itself can’t help but get unbelievably self-aware. Travis remarks on how if you’ve watched the trailer, you basically know what’s happening. He references leaks that occurred leading up to the DLC’s release, which revealed the ending. And, for the final surprise, the end of the credits plop the player in a prototype for No More Heroes 3. You get to wander around and swing a lightsaber that’s missing all the particle effects until Travis eventually tells you to get the hell out, because the area is under construction. 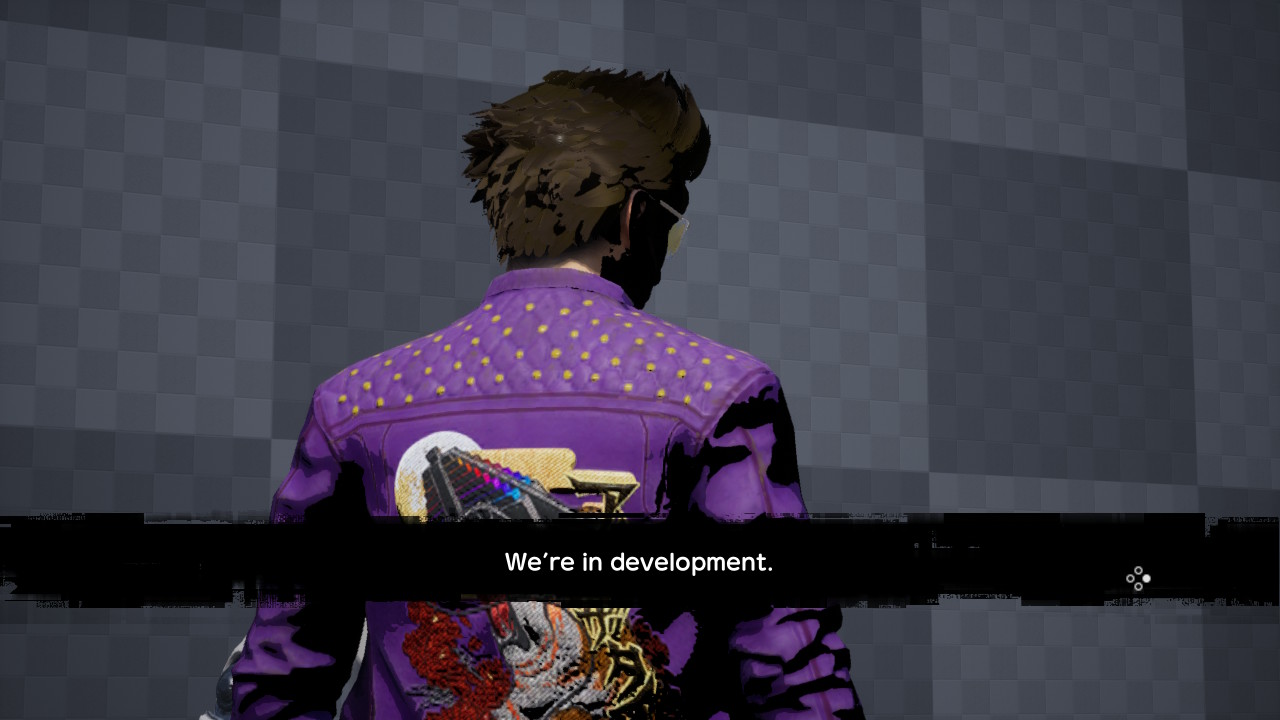 No points for guessing which recent release got teased here.

All of this, in my book, helps save the trite combat of Travis Strikes Again. The compelling story twists, frequent homages, and unique style all helped make up for mediocre saber swinging. Perhaps the most tragic part of Travis Strikes Again is by the end of the game, you have two new characters to try, but I didn’t want to play more of it. Ever.

I was glad I played it once. Exactly once.

The choices Travis Strikes Again made combat-wise had me nervous about the direction No More Heroes 3 would go. While this more arcadey approach was forgivable in a budget title, in a full-fledged 60$ product I would feel absolutely robbed.

So how did No More Heroes 3 turn out?

Watch this space soon for more. 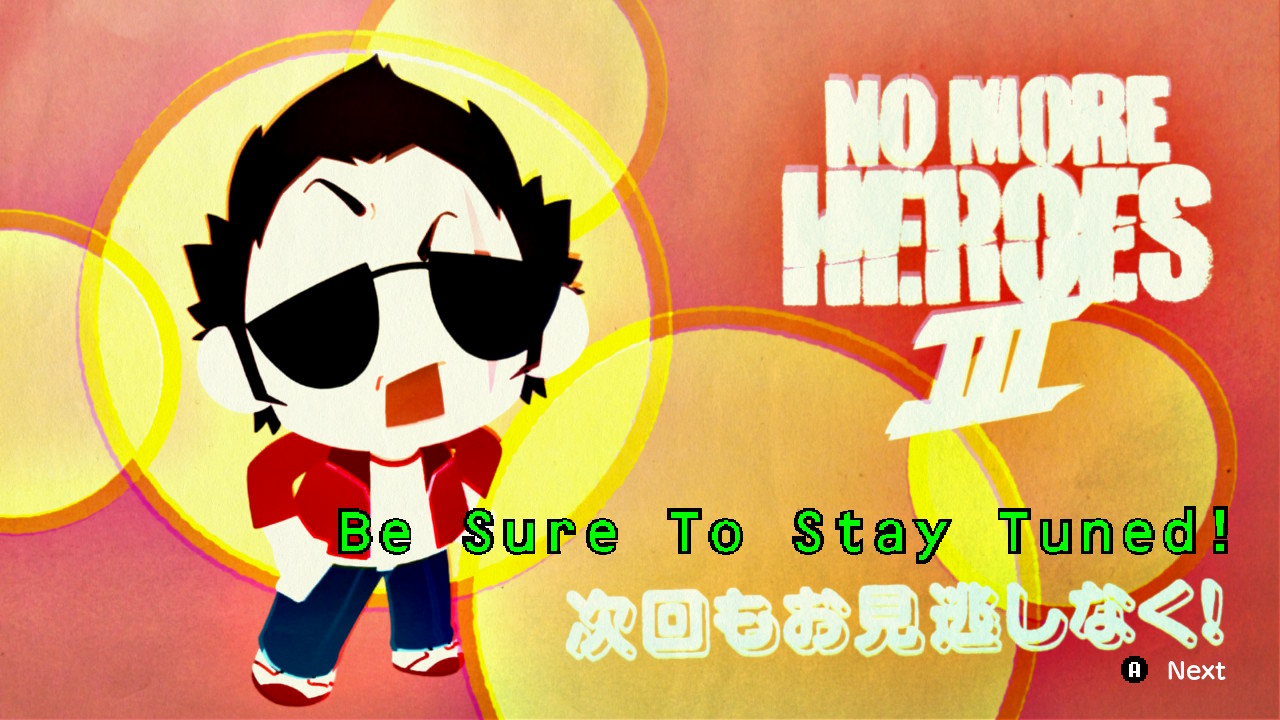