I Got Destroyed In Justin Wong's Charity Guilty Gear Tournament

The Grand Bamboo Battle Charity Event Qualifier wrapped up Monday night, and yours truly attended. If you've ever wanted to compete yourself, or are just curious how it works, I'm here to demystify the process. How did it go, you ask? You may want to read the title again.

It’s no secret I am a huge fan of Guilty Gear: Strive. Having recently hit floor 9 as Giovanna, I thought perhaps I was ready to test my mettle in the real fires of competitive play.

As you can tell from the title, I wasn't.

But hey, I’ve been through the process now, and I'm here to walk you through it.

First thing you should know...

Thanks to smash.gg, joining a competitive tournament has never been easier. Step one — make an account and set a name for tournament play.

The answer here seemed easy. I use "Nydus" in a fair amount of places, and I currently reside in the hometown of REO Speedwagon. Given Guilty Gear is all themed around music, the answer seemed obvious.

I believe its time for me to flyyy!

Step two, join the organizer’s discord — which, in this case, was Justin Wong. This is the only part I encountered a slight hitch; Smash.gg did not seem to realize I’d done so until almost thirty minutes after the fact. After some patience, however, the registration button finally lit up. After that, it was just a matter of waiting for tournament day. My advice? Don't wait until the last minute. Register early enough that smash.gg has time to get its act together. 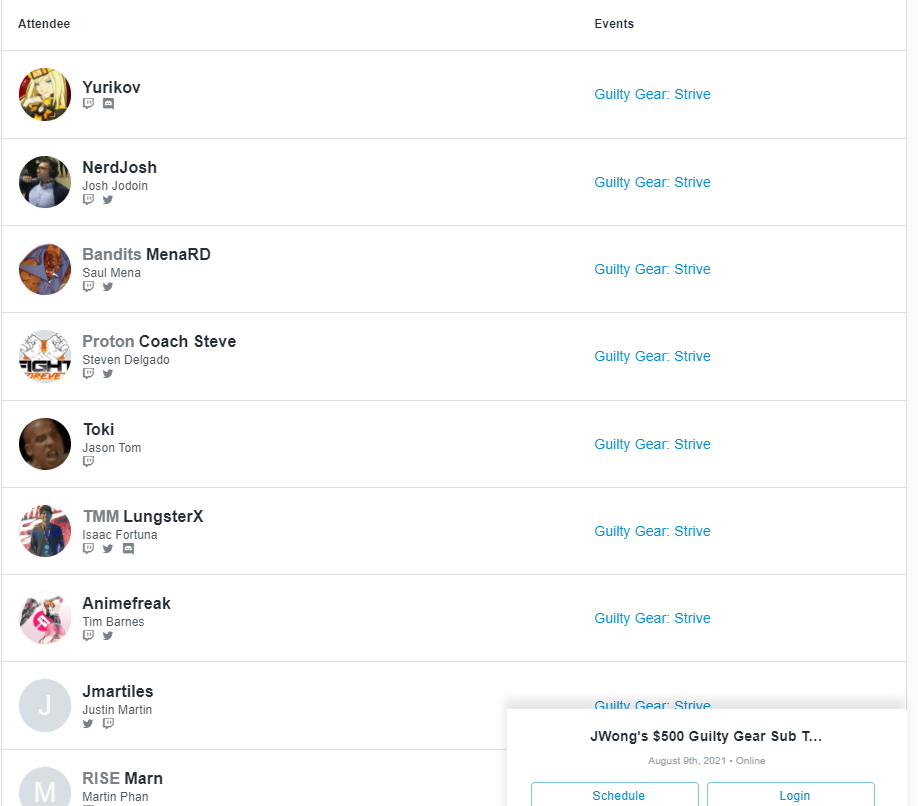 Prior to tournament day, you can watch new attendees roll in. LungsterX is a force to be reckoned with on Mila.

Speaking of which, the next tip is perhaps the most important.

Smash.gg Will Auto-DQ if You Do Not Check in Within 5 Minutes

Once an event starts, you need to head to the match registration page and click “check-in”. This page only appears once the bracket is populated and the tournament has begun. If you miss this window, Smash.gg will decide you're a no-show and disqualify you. I imagine the Tournament Organizer has the power to overturn these for extenuating circumstances, but best not to have to beg for re-entry. Next thing to be aware of...

There Is A Chat Window

For the sake of bandwidth, I turned off the stream before the match began. Had I been watching, I would’ve seen the room code on Justin Wong’s stream, but alas, I did not.

There's a tab on your match page labeled "chat." Ends up the Tournament Organizer, Josh, told me what I needed to know in there. That’d I’d be on stream, what the room code was, everything. While I did check in on time, I ended up slightly delaying the opening match simply by not checking this tab.

My first match was against AnimeFreak. For those of you who do not follow these smaller tournaments (which is probably all of you, honestly), this was not great luck for a first-timer like me. AnimeFreak is a godlike Chipp player who performs quite well out there, and I am, as I always have been, a nobody. In wrestling, one might call me “a jobber.”

After jumping into the lobby, it was time for match number one.

Ends up my name created problems for Justin and his mods. Namely, it was too long.

Also, while I thought my name was clever, chat seemed mostly confused. I failed to consider the venn diagram of people who play Guilty Gear and watch Jojo is probably a perfect circle, while the people who know REO Speedwagon these days falls well outside both.

Here’s a brief recap of how the match itself went.

The full tournament is up on Justin Wong’s twitch channel, if you really want to watch the full bodying. I've queued this link up to the beginning of my ass kicking. While the full tournament is about four hours, don't worry, this set of matches only lasts a few minutes — a statement which really says it all.

Most fighting game tournaments are double elimination rules. While others continued matches on stream, the rest of us losers bounce down to the “losers bracket.” The winner here gets a shot at taking on the winner of the upper bracket when everything is said and done in Grand Finals.

My next opponent in losers went by the name Jake Ryan. After my chat experience with AnimeFreak, I didn't really know what to expect from later competitors.

Alright then, thanks. And don’t worry, it is not forgotten.

Fortunately Jake Ryan was fairly kind and patient, which helped nurse the absolute stomping he dealt out. 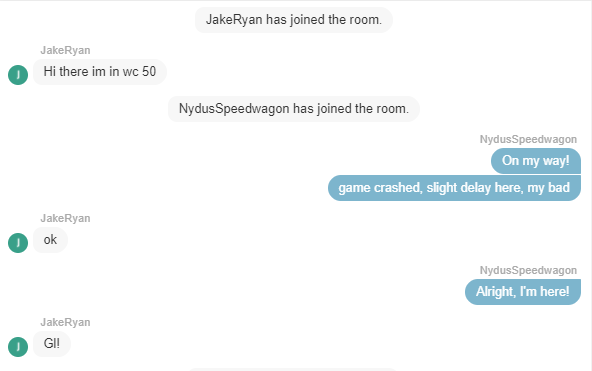 This one happened off stream, but it went about the same.

With that, now I was eliminated. My entire tournament run lasted roughly fifteen minutes. I popped into chat to say goodbye.

Here’s another thing you may want to know, if you choose to compete.

I accidentally held up the bracket when I didn’t confirm the results of a match myself. I suppose this makes sense, and saves the Tournament Organizer from having to do all the work themselves.

After a match, it’s important to click on some drop down menus and verify results. If one person takes too long it will eventually verify using whoever’s put in their information first. This is not ideal, however, as this eats up a significant amount of time and delays the winner from moving on to the next match. No idea what happens if both players fail the validation process; I assume the TO has to step in.

I perform much worse when I have an audience.

Granted, I’ve only provided a few gifs, but I think you can see the difference even here. I landed a number of decent counter-hit confirms against AnimeFreak, but failed to capitalize on any of them. In watching the replay, I also see an absurd amount of missed inputs and non-executed super attempts. Just look at this kick, for example.

I was going for a standing HS here, but didn’t let up on the joystick in time. Too eager mashing it out. AnimeFreak, being the good player he is, took the opportunity to whiff punish.

Meanwhile, over in the off-stream Sol match...

While I’m still getting absolutely pummeled off every hit, I manage to convert these hits into something resembling a combo.

I need to learn how to convert with Giovanna from further away.

Almost all the decent combos I land happen up close, but against Chipp all my counter-hits were at distance. I didn’t know what to do with any of these hits as a result. Big, flashy combos are well and good, but its also important to have smaller conversions from a multitude of hits.

So, that was that. My first (and maybe only) tournament run. After such an absolute bodying, I decided it would be best to go out with a beneficial offering to the charity and a well deserved self-own.

My journey ends here, but yours could still begin! There are more events all month, hosted by HookGangGod, Jiyuna, Punk, and Kizzie Kay.

If you’re worried, I wouldn’t be — I mean, it’ll be hard to do worse than poor NydusSpeedwagon. If nothing else you can drop in to support the players, or support the charities each host has chosen. Tell 'em Speedwagon sent ya.